So, I’ve been seeing people do collages and stuff, showing what they’ve made throughout 2015. I figured I would post a topic on how 2015 was for me MOCing-wise, as well as in general. Also, I will provide commentary on how I thought things turned out with each MOC.

So without further ado, let’s begin. 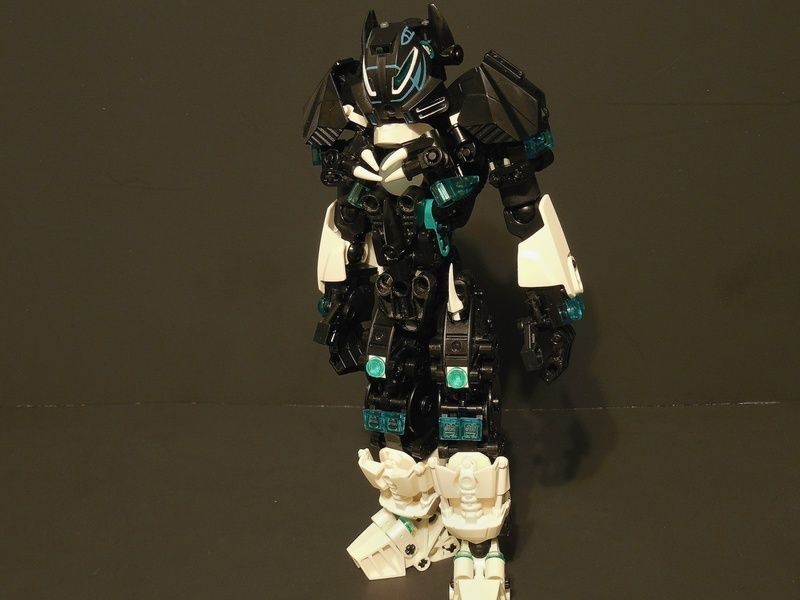 Here we have the first MOC I posted in 2015, Ventum V8. First thing I will say about this, is that I don’t consider it Ventum’s best version. I still feel like V7 and V6 do a much better job, and V5 had the most character of them all. However, this wasn’t a bad way to begin the year. 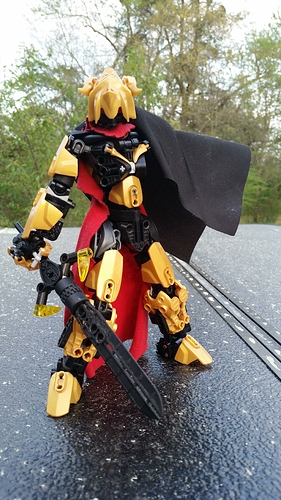 This was a MOC I built for a MOC-off against a friend (which I lost.) She is without a doubt, what I consider my best female MOC. I feel like if I refined some more parts to her, she could be better. But alas, she’s been scrapped for a while. This MOC overall came out pretty good. Also, it gave me a chance to use some fabrics again. 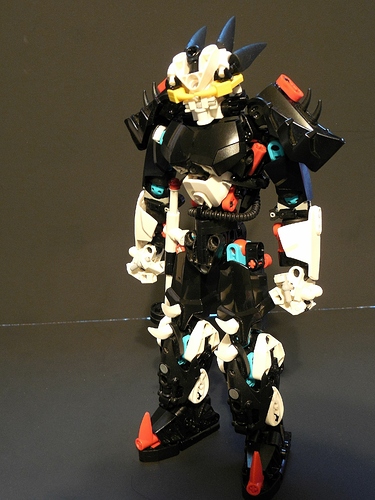 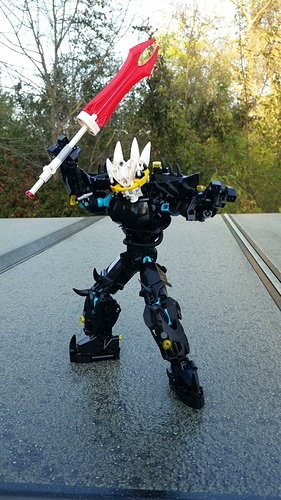 So, within this time span, I created one of my favorite OCs and newest Self-MOC, Kolk. His first version was really beta and wasn’t really fleshed out. Most of its issues came from the colors. I fixed these in V2, as well as refined a couple of the design aspects. This is what I would consider one of my most solid MOCs, and he still really holds up I feel. Definitely one of my best I feel. 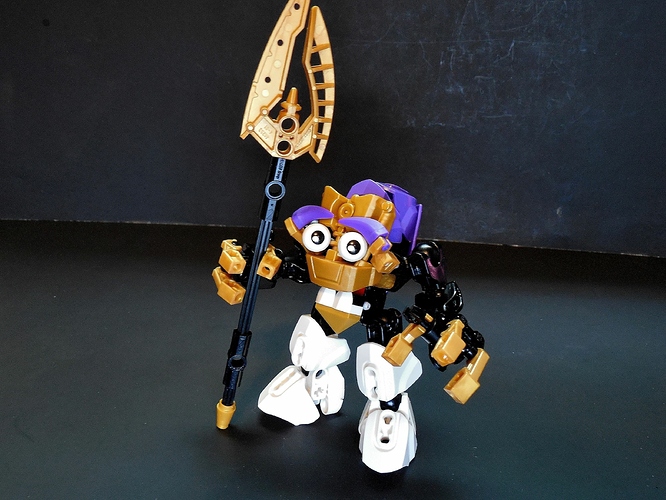 Oh boy, here we have one of my more different builds, Eekum. I made this mostly as a way to try to branch out of the humanoid scene. I built him in pretty much 2-3 days. He was one of my favorite MOCs for a while, and a really fun desk toy. There’s not much else to say about him. 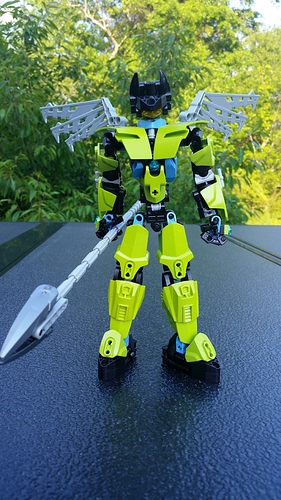 Oh boy… another female MOC. This one is a really old OC I had and decided to revamp. This was originally going to be male, but ended up becoming female after the building was done. The MOC itself is interesting, and the colors are pretty solid I feel. Otherwise, this was just another villain to put Kolk against, alongside Altrah. 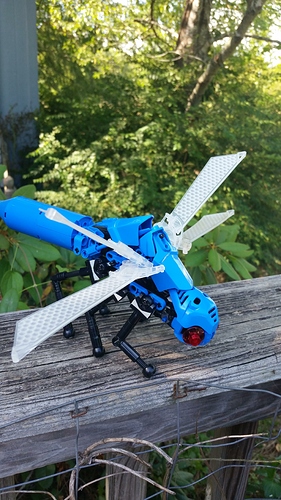 This… this was, at the time, my most ambitious build. I had never built an insect before, so trying to do so was interesting. I began with the head, and eventually the rest just followed suit. This is considered by several to be one of my best MOCs ever. The only issue (with this version anyway) is the thorax is way too drastic from the organic shaping of the rest. But overall, not bad for a first attempt I feel. 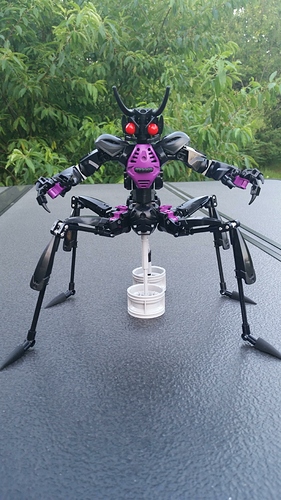 Oh boy, another ambitious build. This one was made for several reasons: 1) I wanted to try using the ant wings from the antman set (never did sadly). Then 2) Because Shadowgear made a Spider Centaur type guy, and I wanted to try doing a similar concept on a smaller scale. I think it turned out relatively okay. However, the legs were incredibly weak, and he relied on a stand for a very long time, until I updated his legs later on. 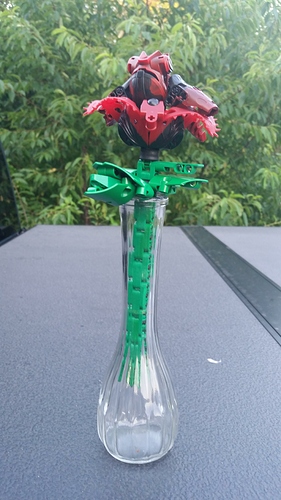 This MOC is the most personal and sentimental one I have ever made. There is a backstory behind it, but I’ll go over it very briefly in the recap at the end. This MOC was made in roughly 2 hours as a tribute to my Grandmother. It is still built to this day, and sits on my desk next to my computer. I plan to never disassemble it. 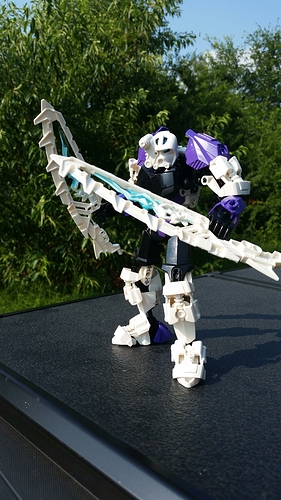 I built this MOC for fun. This time of 2015 was hard for me, so I used MOCing to get through it. This MOC was made to try out one of @LoganMcOwen’s gear box designs. It turned out okay I feel. It looks like a Kopaka with purple though. Lol 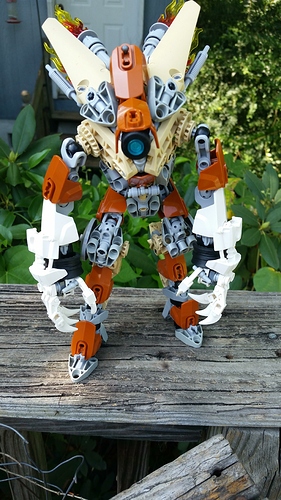 Now, this is one y’all have most likely seen before. This MOC was built in a couple of days, mostly just because I wanted to make a robot guy. This MOC also got featured on MOC Spotlight a while back as well. The MOC itself is pretty okay. Was really articulate, fun to pose, and a joy to do stuff with. Not much else to say on this guy. 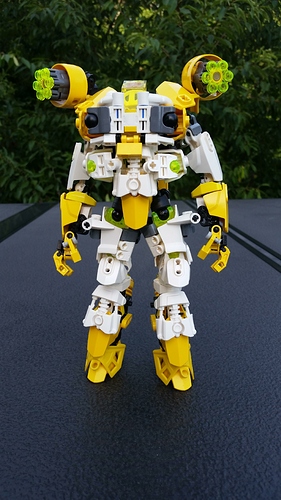 This is a glorified table scrap at its finest. I built it around 4AM, refined it, and then decided to post it. Not much to say about this, other than that it is what it is, a exo-suit. 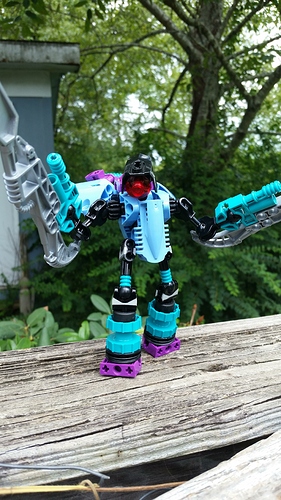 Opening up August, we have the Tropical Scout. At one point, I had wanted to make the Scouts a series of MOCs, each with a different aesthetic and concept. I never managed to do it, and the “series” died with this guy. This was more an experiment with colors than anything. It turned out pretty well I think. 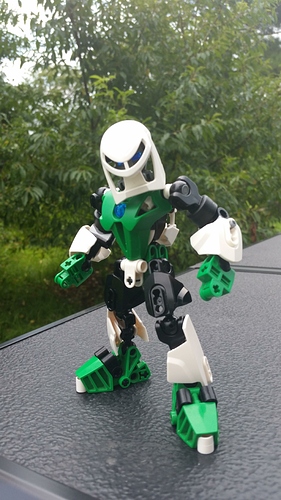 A small MOC made for a group. That’s about it. The MOC itself is nothing to really write home about. So there isn’t much to say about this guy. 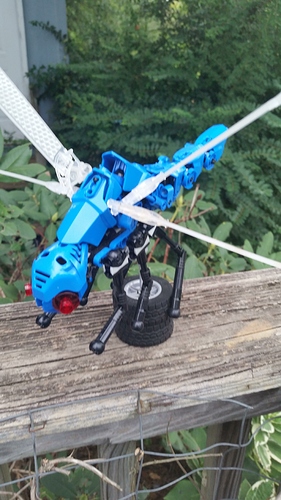 All I did was fix the thorax. It now had a more organic shape to it and fit with the rest of the MOC. 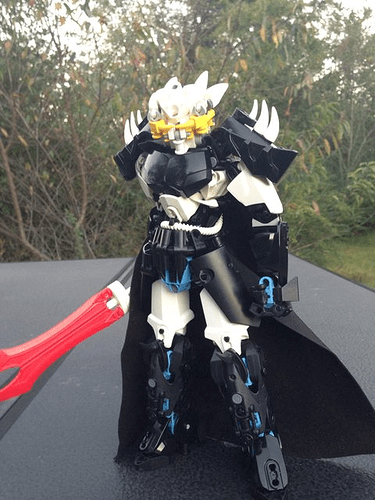 So, around June or so, Kolk V2 bit the dust as a built figure. I decided I wanted to bring him back, so I made a V3. This version features several new aspects to the original base design, as well as overall improvements. This version of Kolk is still built, and is what I consider my best build MOC to date. 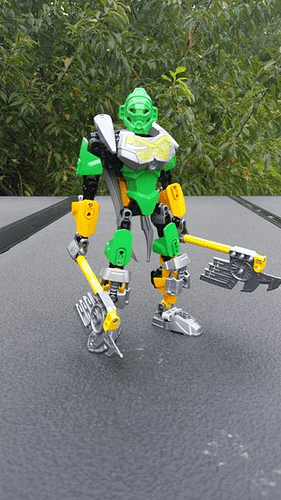 This was made mostly for fun. A simplistic attempt to revamp Lewa, while keeping the core build somewhat the same. Some colors were switched around and a few new gimmicks were added. Overall, this MOC was okay. 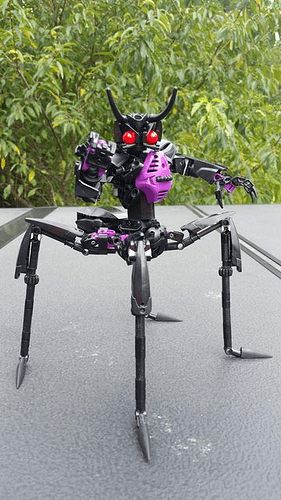 Reinforced the legs and changed around a few elements. Nothing to write home about. At least now he could stand without having an awful build having to hold him up. 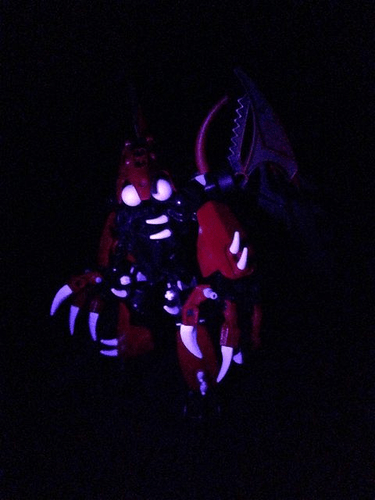 A MOC made in the spirit of Halloween. Decided I wanted to make a small demon for Halloween and this was the result. The currently displayed picture is from taking photos outside in the pitch black darkness. Overall, the build was pretty tight and it came out pretty well. 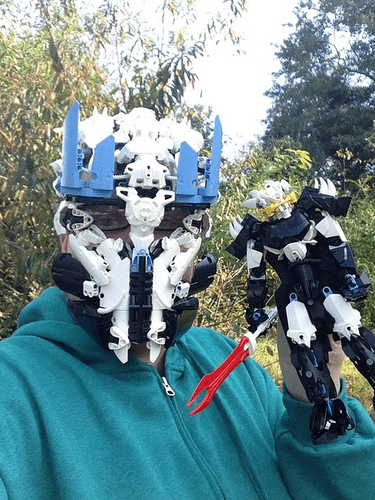 An entry into the Mask Maker contest held on the Bionicle FaceBook page back in October. This was my first attempt at making a wearable MOC, and it came out pretty well I feel. Although, I will say, it is not my best MOC. Fun Fact though, the colors and power were based around Kolk. 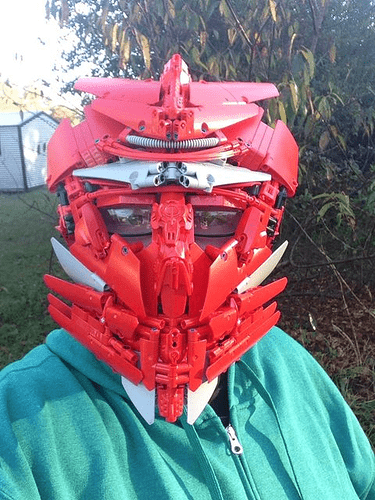 My second entry into the Bionicle Mask Maker contest. At the time, some considered this my best MOC. Out of the two masks, this one is the better. The design was more durable, and the look was much more attention gathering. It didn’t win, but it got 2 of the 3 criteria for the contest. Was definitely a fun build, but time limits made it stressful as well. Overall, it came out pretty good I feel. 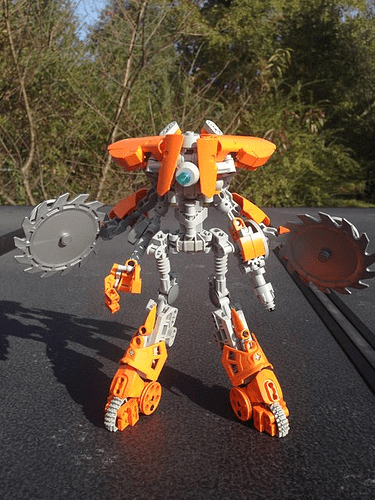 This was my 3rd time at building a robotic build. Unlike the two scouts before it, this one was a lot more experimental with design choices. It turned out pretty good I feel, but I can’t help but feel like it could be better in some ways somehow.

###And I have saved the best for last… 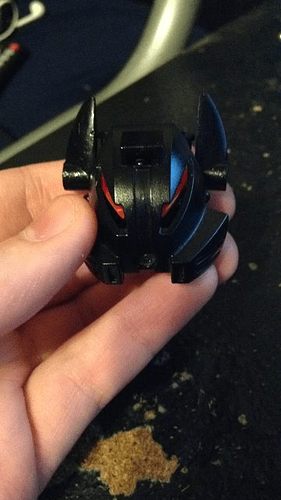 Yup… I’m making a Ventum V9. However, it is still very much a WIP. I haven’t got more than his head currently. I’ve been in a serious rut with MOCing, and hope to get this done as soon as humanly possible. I just felt like sharing this for the hype factor and to show I’m not exactly dead with MOCs.

This year has been pretty hectic for me. A lot of ups, and a lot of downs. The beginning and end were pretty smooth sailing and fairly swell, while the middle was a very hard time for me in my life. Some personal things happened, family passings, and it was very hard for everyone I know offline including me. Things were even more rocky for a while with me, but I wish not to elaborate. A lot of good things happened though. I feel like I’ve grown so much as a MOCist and a person this year that it trumps all my past years of MOCing easily.
I also made a lot of friends this year, both on and off the boards. Some really great people whom I still talk to and joke with. You guys know who you are, and you’re awesome.

So… that’s it. Feel free to comment if you wish. Thank you for your time.

oh man, I remember seeing ventum v8 and thinking it was good
those were the days
Your mocing style has def changed

I’d say Dragonfly and Kolk V3 are the best

I’d say Dragonfly and Kolk V3 are the best

Likewise. Those MOCs opened a lot of gateways for me. I’m glad someone else concurs

I don’t even remember why I added red to be perfectly honest. I hate red. Lol

These are really nice, especially that second mask.

A nice recap, looking forward to seeing the 2016 MOC’s and eventual recap.

James where have you been

James has literally been doing nothing but playing warframe

These are really nice, especially that second mask.

A nice recap, looking forward to seeing the 2016 MOC’s and eventual recap.

James where have you been

I’ve been a ghost.

James has literally been doing nothing but playing warframe

“Video games are bad and you should feel bad for playing them” - Ventum, early 2015

The rose is my favorite, it looks great and I love using parts to build plant life

“Video games are bad and you should feel bad for playing them” - Ventum, early 2015

What? I never said that. Lol. I used to not be into games though.

The rose is my favorite, it looks great and I love using parts to build plant life

Well, you say you were dead, but your wrap up post is certainly full of more builds than mine.

And they’re all great! It’s always lovely to see something of yours show up in my Flickr feed.

Well, you say you were dead, but your wrap up post is certainly full of more builds than mine.

And they’re all great! It’s always lovely to see something of yours show up in my Flickr feed.

Well, I know that feeling. Seems like I’ve only built one r two meaningful creation in the past few years. I’m trying to get back to it, but having trouble getting used to it again. :b

Not a problem! looking forward t the new Ventum, whenever he may be finished.

All your mocs… are so sexy.

Your MOCs are awesome!

This is what I aspire to do

Please tell me you’ll use a torso design like the one V8 had with the rib cage and the Zamor sphere.
That was dope as hell and definetly my favorite part of the entire moc. Definetly adds flair.

Nothing wrong with black and red CSchemes for SMs

In!case Zach is reading for some reason