What would happen if a villager tried to unite with a creature? The answer, is nothing. Nothing is supposed to happen, due to the influx of power being too great for an Okotan to comprehend or handle, causing anything taken in to pass through the villagers body instantly. Now what would happen if a villager found the Unity Mask of Jungle, made themselves specialized Shadow Armor, captured two creatures, and threatened to kill one of them if the other didn’t give them its full power? The answer, is Acero. His mind ruined from being the host of a skull spider, the once happy blacksmith Acero was turned into a blank slate. All his memories and feelings had been stolen from him, leaving him senseless and numb. As he sat in his home in the City of the Mask Makers and stared out the window in his normal emotionless stupor, all he saw was anger and sadness. Villagers angered over Makuta’s betrayal, angry about the skull spider invasions, scared about their future, and most of all, confused. Nobody knew what was going on. The Protectors couldn’t repair masks to keep the villagers healthy, and the ancient city was being overrun by Kulta and his army. The negativity struck something in Acero that displays of happiness and joy never could. While his memories never returned, his emotions did. And in that moment, Acero decided he would be the one who would fix the chaos. He would become the living embodiment of order.

Using what little muscle memory he had, he shambled together a set of armor made from Voidstone, a material that could only be found at Umarak’s birthplace. With his new powers of shadow, he roamed into the region of jungle, hunting down Uxar, the creature of jungle. After months of searching, he finally found the creature, who had zipped down from above to see if the half dead villager was OK. Without even thinking, Acero brandished his hammer, and struck at Uxar, knocking him out senseless in a single blow. As soon as the creature awoke, it found itself bound in a dark cave, with the deranged Acero hovering over it. The villager threatened to kill every creature of Okoto if Uxar would not unite with him. Despite being able to easily escape its bonds, Uxar had no intention of hurting the villager, and complied, expecting the result to be like it always was. Not this time. The Shadow Armor kept in the elemental power, mutating and altering Acero’s body, until he was a disturbing amalgamation of Creature and Okotan. Uxar managed to disengage and swipe the Unity Mask before he became part of Acero, disrupting the former villager even further. As the creature fled for its home, it could hear Acero howling in agony. Everyone within a five mile radius could.

His body, mind and spirit completely destroyed, Acero finally lost it. If the villagers were ■■■■■■ to a life of fear and misery, it would be his job to make them calm and serene. And what’s more calm and serene than a corpse?

WITH THAT OUT OF THE WAY, HERE’S THE MOC ITSELF!
(Once again, shoutout to @Ghosty for the upper torso design (even though it is heavily modified)) 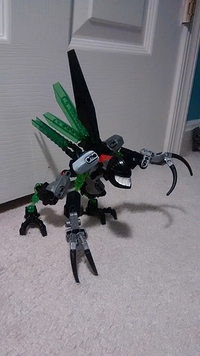 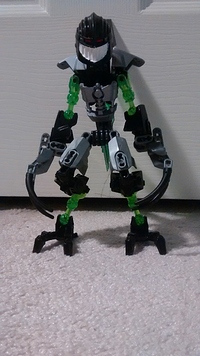 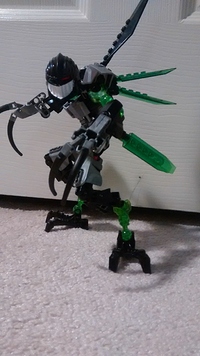 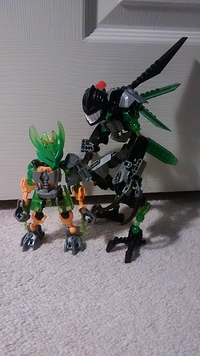 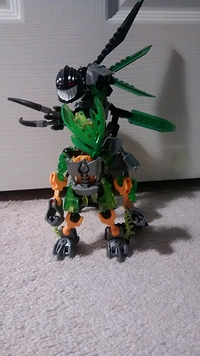 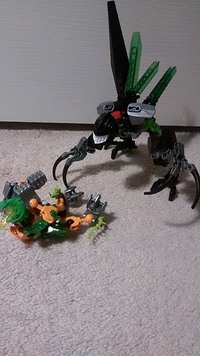 oh yeah, this dude is actually my self moc

Such a creative and well done moc. The painted grin is a really nice touch.

it looks pretty nice, but I was dissapointed after seeing that it was not a toa/creature of iron

The Great Error. As in this guy? 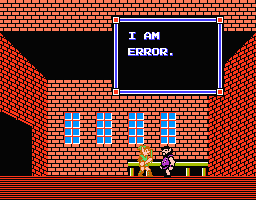 Hey. You used Okotoan feet for claws and they don’t look stupid!

I dig this guy. He’s a creepy-crawly vibe and a cool color palette.

I feel like this is what Lewa would be thinking.

This looks really cool! I really like what you did with the protector feet.

Wow, that is a STELLAR use of the Sir Rascus helmet! It looks insane. Oh, yeah, the MOC is amazing too!

Love what you did with that face there.

Anyone still around?
Ah probably not.

In any case, I redid his armor, back thing and colors, so he looks less armored and more natural 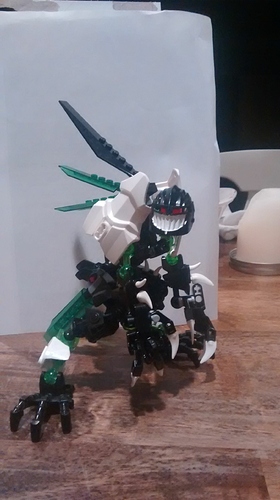