(apologies if this isn’t in the right forum/subforum)

Hey all. Ever since acquiring all of G1’s sets that use the Toa Mata build (which really is just Mata/Nuva/Takanuva

), I’ve toyed around with freeing up some of what I perceive to be limits to their articulation.

The first step I took was using rigid hose pieces to create neck articulation, which is a fairly common alteration that’s made to them as far as I know. I noticed that I had some leftover tube, and proceeded to replace axles in the left arm with them (for the Mata sets, this applies to Tahu/Lewa/Kopaka/Pohatu).

This lets me pose the arm without being forced into the 90 degree angles that using an axle limited me to. Some demo images are below. 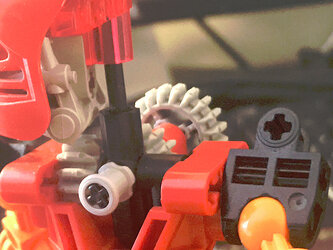 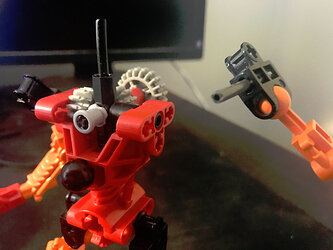 Using an Axle/Pin connector to lock the pin into place. 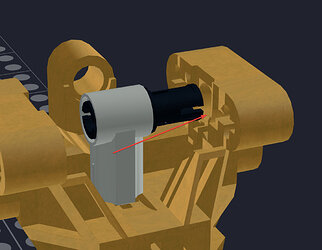 image1135×879 182 KB
The gear function is still in place, though I’m wondering if I could also replace the axles in the gear function arm(s) with more hoses, though it might be redundant.

I don’t have any more hose, unfortunately; I was interested in seeing what other uses could pop up when replacing axles with rigid hoses. Has anyone else experimented with this?

tl;dr I’m thinking of replacing the Mata build set axles that are 3L and 5L with rigid hoses of equivalent length to add some flexibility for shoulder/hip articulation.

Has anyone else done this kind of modification for their Mata style builds/sets? If so, how well did it work out?

The last time I used a Mata torso I used blue pins for the non-geared joints. I’ve never had a completed Mata build so I never realized they were rigid like that.

I could see blue pin usage for the shoulders working (and I think a similar technique is used in Takanuva’s instructions if I’m not mistaken), but I have two issues with such a technique.

For the shoulders, unless I’m missing something obvious, it looks like that technique will leave an “empty” gearbox, pictured below. 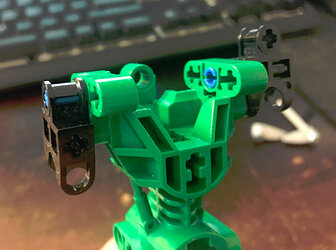 image3164×2353 1.6 MB
The issue with using blue pins for hip articulation is that through the center of the bottom, an axle is required if you want to keep the legs centered. Moving the leg connection to either the front or back pin holes has left a bad taste in my mouth from my personal experience.

Circled in red (might be a bit hard to see 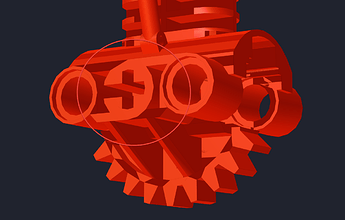 image1222×780 118 KB
That said, I did decide to try using blue pins for the legs by alternating the pin holes; I’m pleasantly surprised by the result, though it’s still not my ultimate goal. It does allow for pretty dynamic posing, lack of knee/elbow articulation notwithstanding. 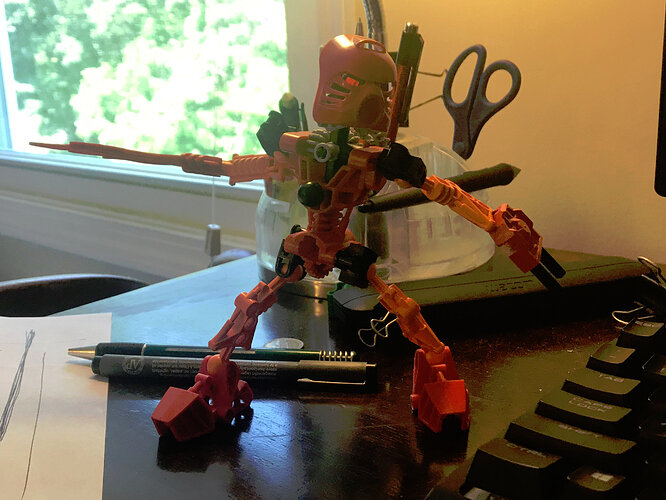 I see the potential issue with the empty gearbox, though I guess it would be a non issue if you used a Nuva chestplate. I hadn’t thought of the legs either; I assumed you were just looking at the arms since that’s what you had pictures of.

Sorry I wasn’t as clear as I should’ve been; yeah, shoulder AND hip articulation is important to me. And just to be even more clear, I have implemented the rigid hose axle replacement for…

The above sets either do not have “double gear” function where both arms swing, or I’ve modified them to be like that. The way my Onua-M, Gali-M, Tahu-N, Lewa-N, Gali-N, and Onua-N sets are constructed, they swing both of their arms, so while both of their arms can rotate, said rotation is completely controlled by the gear function.

While experimenting when writing this post, I was actually able to use a spare rigid tube, a blue pin, and a gear to implement somewhat of a reverse of what you proposed; sticking the axle end of the blue pin into the gear, sliding the pin end into the shoulder, and attaching the arm onto the tube. Gear functionality is even preserved using this method, though you wouldn’t want to swing too hard because there isn’t enough friction. For slow movements though, it works perfectly fine. 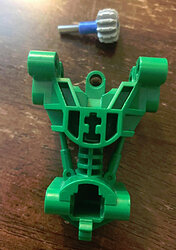 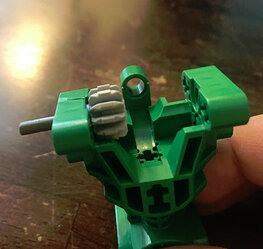 image594×564 97.3 KB
I applied this method to my Tahu Mata set. Additionally, I also experimented with hip articulation by cannibalizing a tube neck from another Toa (sorry Lewa); it does seem to work, but it’s kinda loose. I had to put in a bushing in the center section to add some friction so Tahu wouldn’t suddenly do a one-legged split. 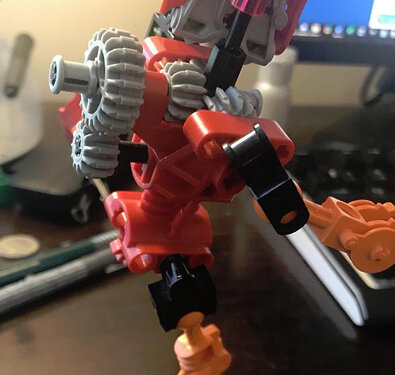 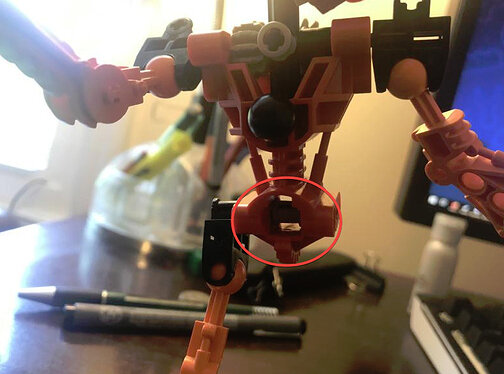 (That probably was more complicated than it should’ve been. TL;DR trying to preserve gear function, but also exploring the possibility of replacing the axle used to connect the arm to the gearbox.) 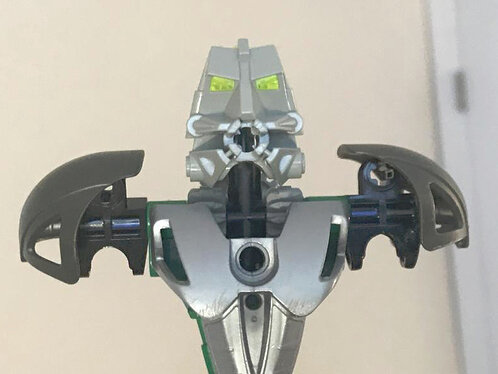 image783×588 106 KB
All things considered, like you said, it really isn’t much of an issue for a Nuva appearance. I even tried to disguise it a bit more by fitting in some gears by turning the neck axle/pin connector by 90 degrees, which actually gives it a fairly satisfactory appearance in my opinion. The lack of a bushing right below the head is fairly irritating though. 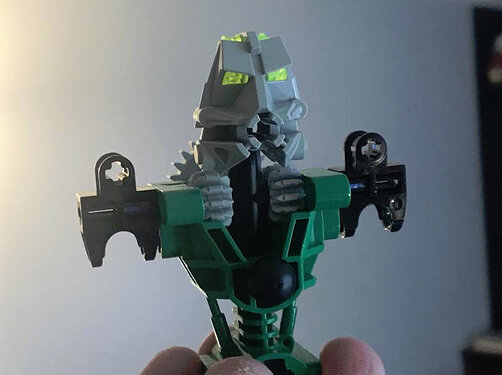 image785×585 105 KB
The aforementioned lack of a bushing is more noticeable on a Mata variant of the build.

Of course, this isn’t going into my personal issues with being able to see the blue pins, which can be easily rectified by acquiring neutrally colored axle pins from Bricklink.

Sorry if I seem extremely picky, I just wanna try and preserve the look of the original Toa while adding some posability.

EDIT: Though the topic really is mostly about tubes for hip articulation, I just discovered this… really shows how out of touch I am with LEGO that I didn’t know about this piece. This would’ve been so helpful for arms instead of cutting up tubes

One thing you could do for the arms is to make the middle gear pole longer, put a ball on it, and hand on the chest. Kinda like Gali but with a ball attached.gives you enough friction to pose, but not so much that you lose the function.

If I remember correctly, that method was used for the Toa Kaita’s legs. I’m not too big a fan of your proposal on the front end (which is also incompatible with the Toa Nuva because of their chest armor), but I whipped up something similar on the back. 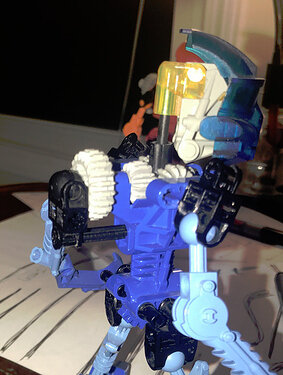 image463×612 122 KB
It’s not the most sightly solution, but to be fair I don’t think that many people are interested in the backsides of 2001-2003 Toa builds. I don’t have a good supply of parts, so I’m curious if other people would have a potential solution to make it look good.

I think I have a Bricklink order of balls coming in soon too which is gonna be a good help if I decide to implement this solution, I don’t have a good supply of them at the moment (also it means I can finally place them all on the back on the gear function in general because me love fancy).

I think the main issue with that solution is that unless I tear apart my recently reassembled Toa Metru, I’m gonna be running low on 4L axles very, very soon because I’ll be implementing a neck articulation solution I found on reddit once I get my first Bricklink haul.

Oh, no, that’s the wrong side! 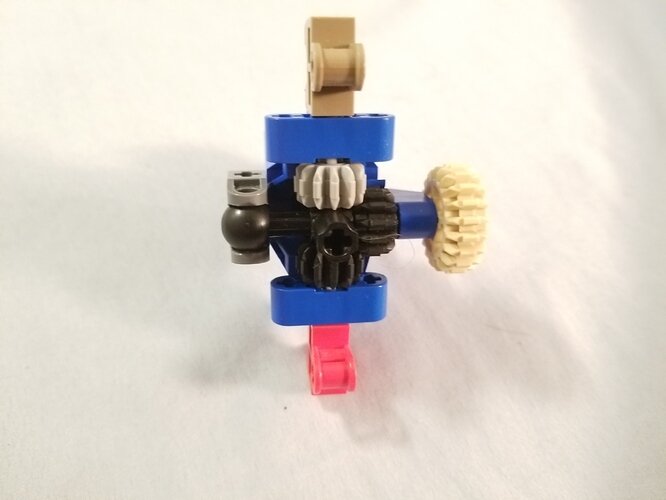 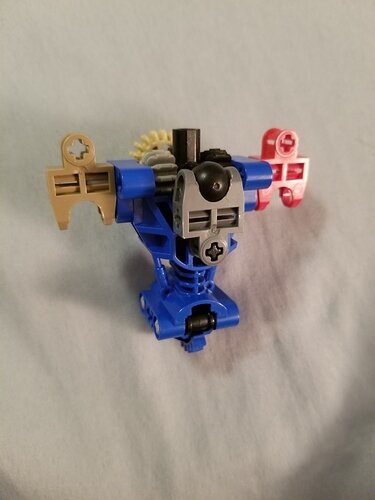 (Sorry about the odd colors, I threw this together quick)

Don’t worry, I understood what you were saying

It’s a pretty good solution, I just personally think that it’ll make every Toa look like Gali from the front.

If you take a look at the neck area, there’s pretty much no way that I’m gonna be able to apply that solution from the front unfortunately.

On an unrelated note, what’s the stuff in the hips of your Toa torso for (the technic piece and the two 3L axles holding it in place)?

(edited to be less unintentionally aggressive?)

Also, this is the piece you were asking about:

It’s a bit tight, but not an illegal connection.

Bit of an update I guess; the parts came in, and I started modifying the Toa. Images are a little rough, but results were pretty good!

Here’s Tahu posing with newfound flexibility in his neck and legs. 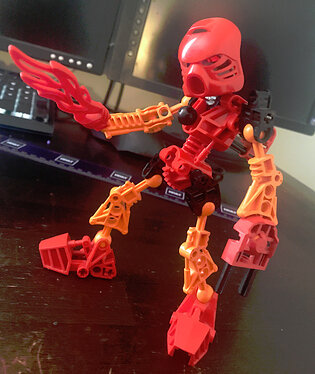 Pohatu’s going for a running start; I put two 2L cut rigid hoses in his shoulders for some articulation. 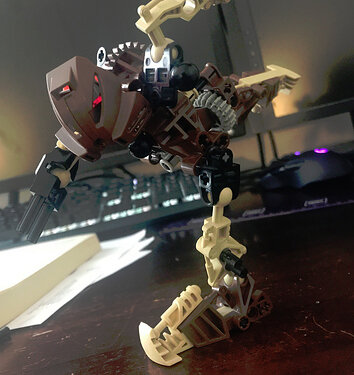 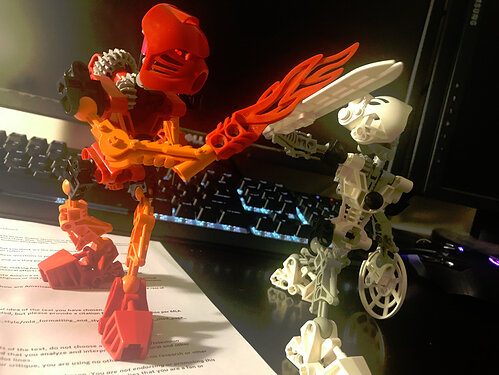 Rigid hose friction’s not too terrible overall, but trying to get them to go too far can make them fall over. 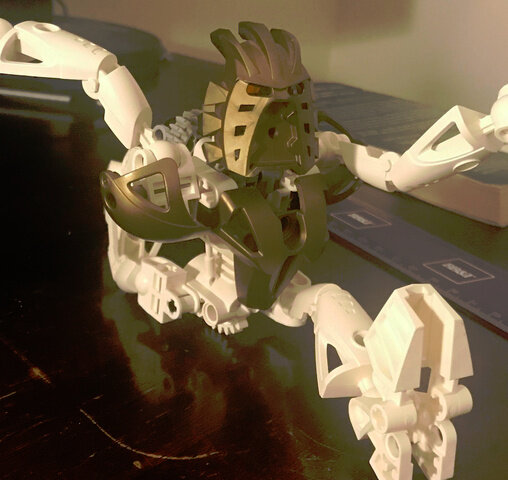 Some of the ends of the hoses I cut turned out a little iffy visually; they’re still functionally fine though and grip the “hand” piece fine, it’s just kinda questionable looking if you look up close.

Overall, I’m pretty happy with how this turned out; gear function is retained, but is limited using black ball friction on the back. Neck articulation isn’t perfect, but does offer permanence while rigid hoses for necks previously tended to bend back towards a straight shape. Waist/hips was the main highlight, and though not perfect (as stated already), resulted in a pretty satisfactory results.

So, I guess I kinda just… answered my own question?