Hey, everyone! Here is another MOC, that I built not too long ago. I went with a more simple approach when I was building this guy, since I wanted to focus on a solid color scheme and a unique weapon without an overly complicated build. Anyways, here is Ahi, the Guardian of Lava. 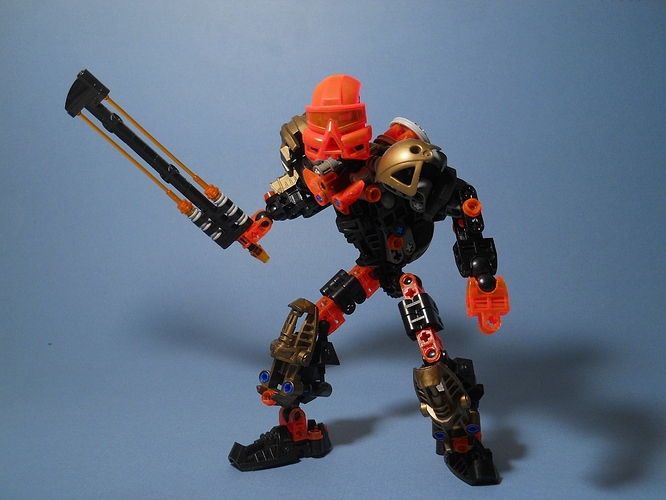 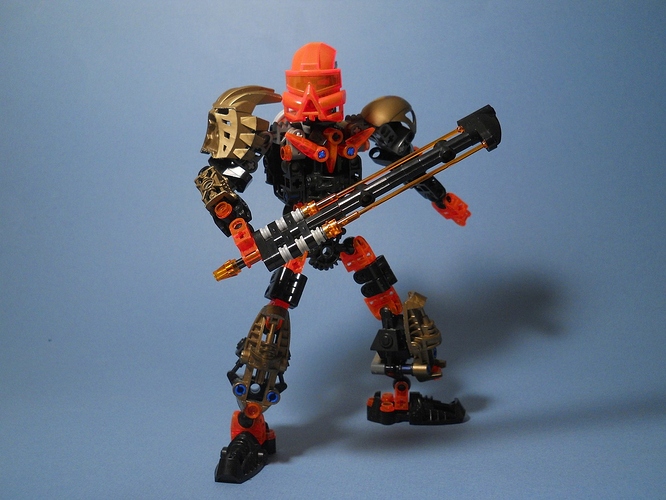 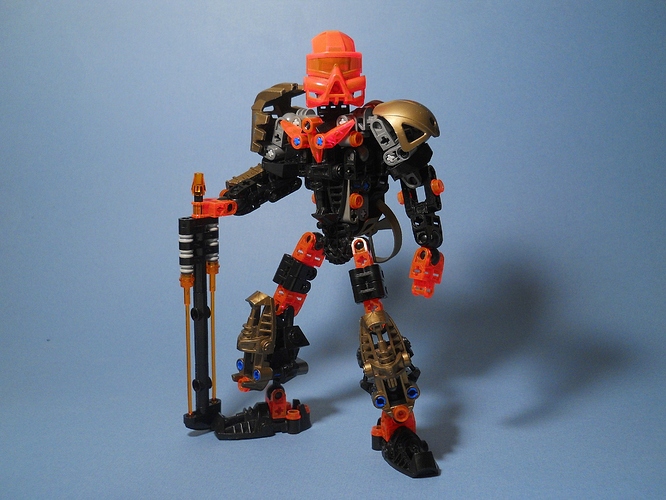 DSCN0170.JPG2560×1920 2.41 MB
The concept for this build began with the sword. I really wanted to build a beam blade that could feasibly (maybe) exist. The idea was that it used plasma and magnets to create the two edges. I also wanted to revamp an old MOC that I made in 2009 that used my trans-orange Kaukau. During the build process, I wanted to incorporate the aesthetic of the 2005-2006 years of Bionicle while using my own style of building. 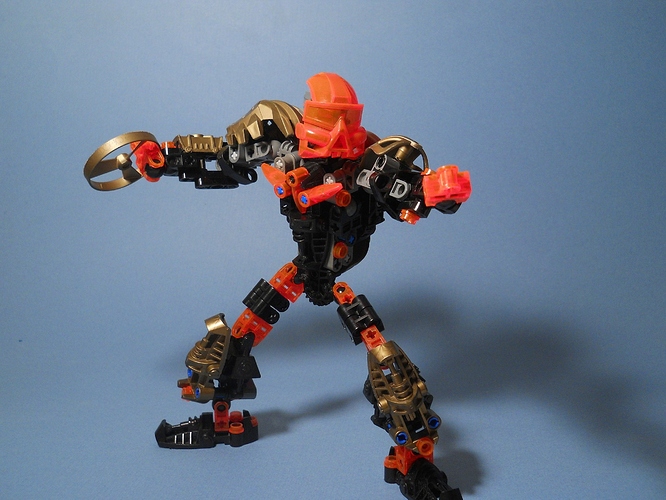 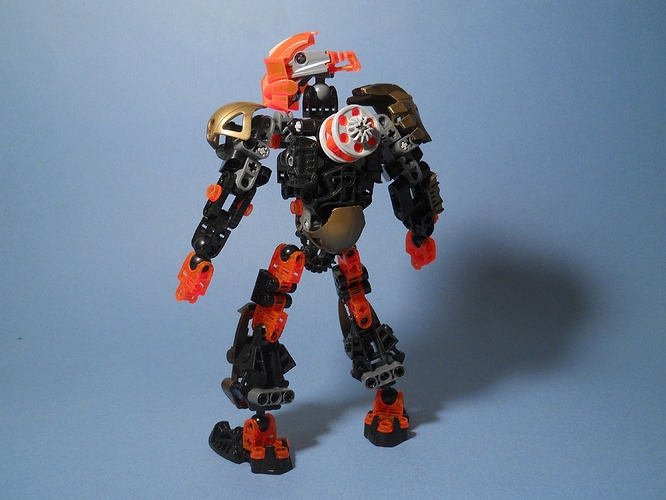 DSCN0176 1.jpg3000×2250 1.65 MB
And now, the backstory:
Often called The Silent Flame, Ahi is being whose origin is an enigma. Blessed with control over molten rock, Ahi is mysterious warrior of a bygone age who guard’s Okoto’s greatest volcano. Ahi’s body is partially composed of lava, giving him an undying radiance. Ahi wears gold armor to commemorate his many victories. He has control over all lava and magma, and can transform solid rock into lava at any time. Ahi wears the Great Kanohi Kaukau, mask of underwater breathing, which allows him to skillfully fight in aquatic environments, which would normally be dangerous for him. Ahi carries a double edged plasma sword and a throwing blade. It is rumored that Ahi was once a great leader of an all but forgotten race…

I hope you all enjoyed this MOC. As always, comments and suggestions are appreciated. Thanks! For more pictures and info, check out the full Flickr album: https://flic.kr/s/aHsk8fJb6s

the naked left forearm is a bother tho, and I guess it’s abit messy, but otherwise he’s awesome!

The asymmetry on his arms I don’t really like, but the trans orange Kaukau, that beamsword, and just the concept makes this dude deserve an A.

Love the colour scheme, and that sword is amazing.

The color scheme is amazing! Love it!

I love that sword

The sword! The torso! EVERYTHING (but but the left arm) IS AWESOME!!!

Could use some dark gold on the torso,but otherwise i love it.

Amazing! To add onto what everyone else has said, I would fix the left arm by using the same armor piece as on the right, but maybe in black, to keep the asymmetry of color. Then again, you used two black ones on the back, so those might be the only ones you have. Maybe use the second gold one? It matches the left shoulder armor.

The sword is undoubtedly the heart and soul of this MOC, so it makes sense that you built that first, but everything else is just as awesome. The color scheme is great, and I love the Rhotuka that’s not a Rhotuka! The Kaukau is also a great choice, though I’d love to see how this looks with a trans G2 Tahu Mask!

I might be the only one who likes the asymmetry, but whatever. Solid build, it looks great! The colors are fantastic! My only issue is the name. Hailing from Hawaii, Ahi means large Pacific Tuna, a very popular fish for eating.

I actually named him after one of the Maori words for fire (ahi). I did not realize that it also meant tuna until after I had named him. Oops. Thanks!

I’d love to see how this looks with a trans G2 Tahu Mask!

I would love to see that, too, but I unfortunately did not get a hold of one. I might have to check at a Lego store to see if they have any polybags in the discount section.

the naked left forearm is a bother tho

but the left arm

I have fixed the left arm in a newer version of this character. The forearms are now symmetric, but the shoulders still have some asymmetry. Unfortunately, I do not have any good pictures of the forearms. This WIP height comparison from when I was building Diaa is the best I have: 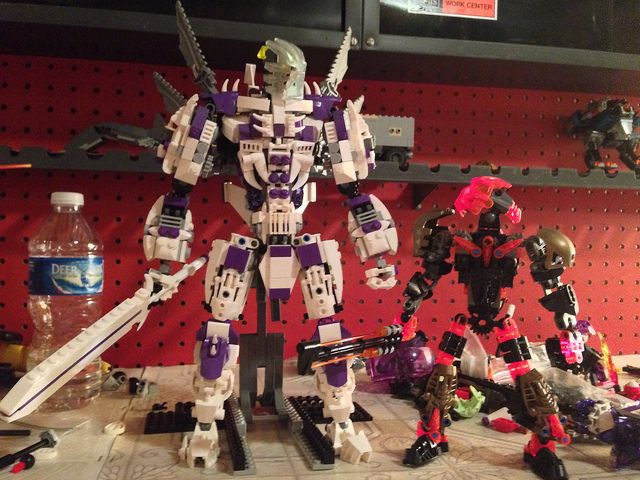 [quote=“Toa_Heatwave, post:9, topic:14385”]
Maybe use the second gold one?
[/quote] Finding that second gold one has been surprisingly hard. It was lost when I was building Ahi, but I found it again when I was moving to a different home. I just need to remember where I put it…

Thanks for the input everyone!

I am not sure about how I feel about the CCBS parts, so he may be changed again later.

I’m not personally a huge fan of CCBS shells unless they’re mixed with Technic to the point where they don’t stick out. Maybe I’m just old-fashioned.

It makes sense to use the Maori term, since that’s the language the Matoran language is most based on. Most people outside of Hawaii don’t know what Ahi is anyway, so don’t worry.

Hate to be that guy, but blue pins are real distracting given their position.
Otherwise fine.

This looks great! I love it! Nicely done, though the Mask of Light shoulder pad is really eh, that’s the only problem I can see with the build, so very well done indeed!

It’s not the worst, since it does contrast nicely with the orange and red, but I agree. I think adding a small amount of mata blue would really help them blend in.