It’s been a while since I posted the last Mixel MOC. With the death of Bionicle (and now Mixels too

) and all that stuff, I decided to postpone this MOC topic of a little bit, just waiting for the waters to calm down.

But now, here’s my latest creation! 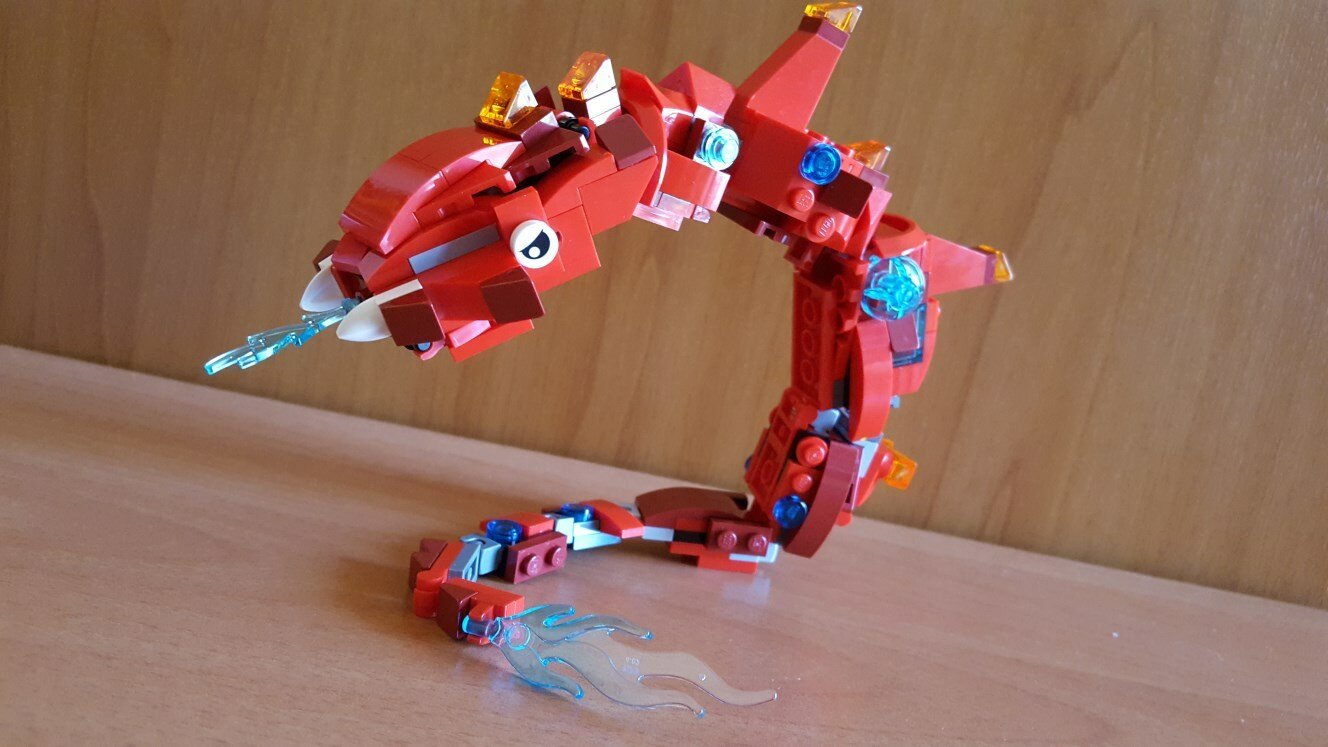 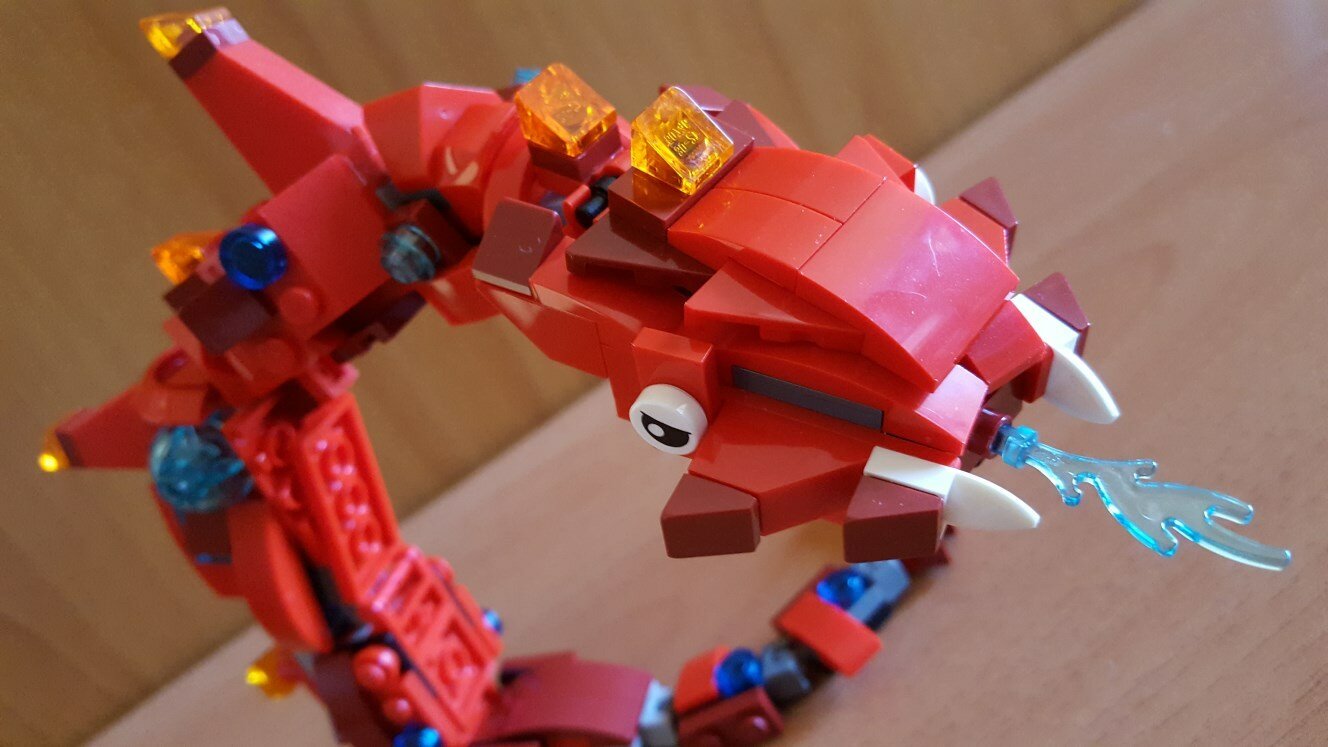 If I had remembered to take all the pictures necessary, you would see that this MOC is made using the series one Infernites, and the series eight MCFD. 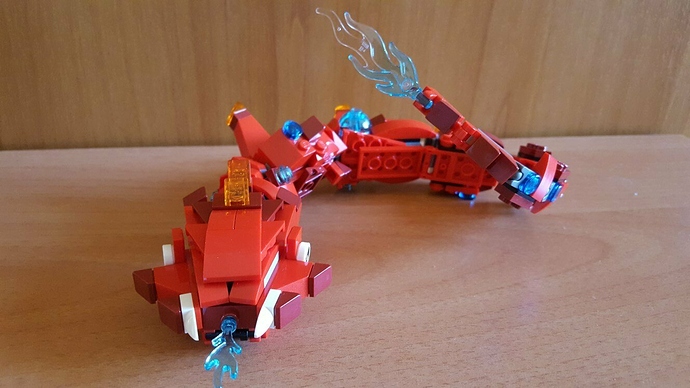 Hydro Slashers live in the clear and cold waters of a huge lake, almost carpeted by water lilies, and surrounded by willows of strange shapes and mangroves. They spend most of the time underwater. 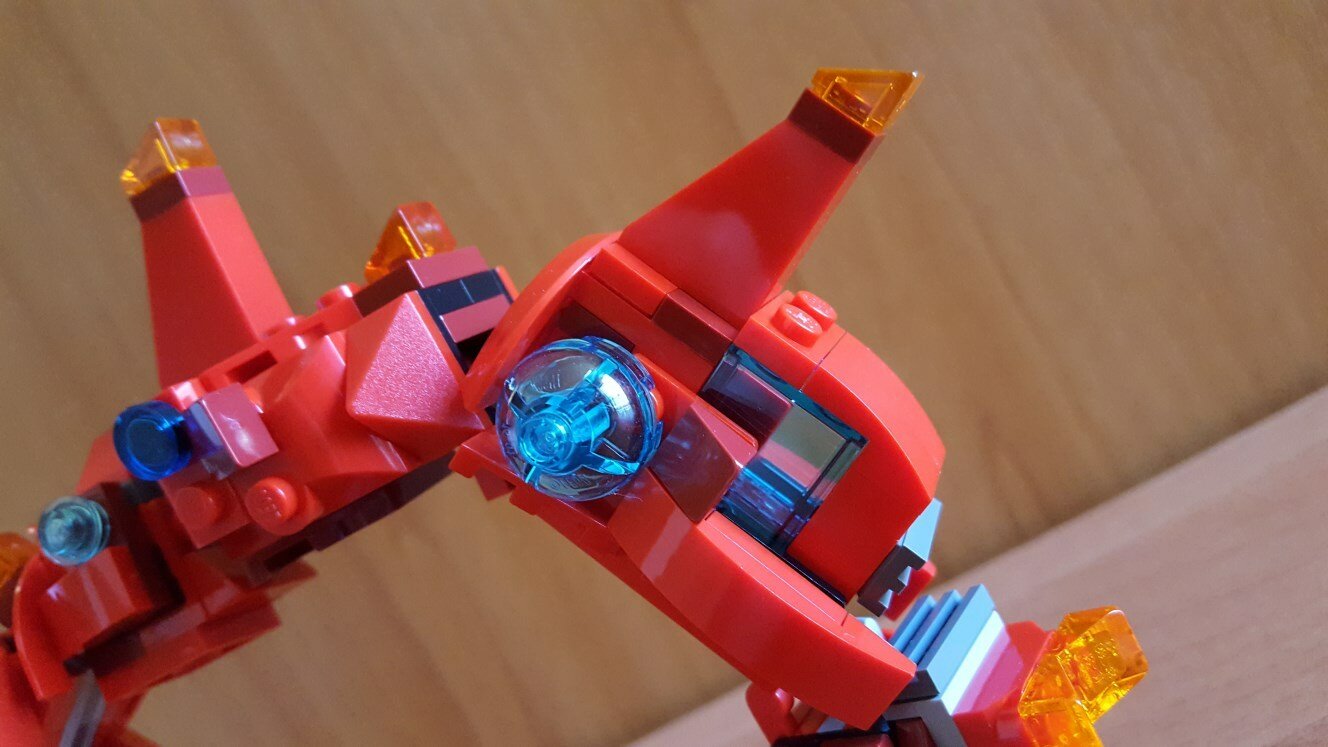 As you can see in the picture above, those creatures have a large water container in their body. The water is absorbed through the mouth, and stored there in case of danger… 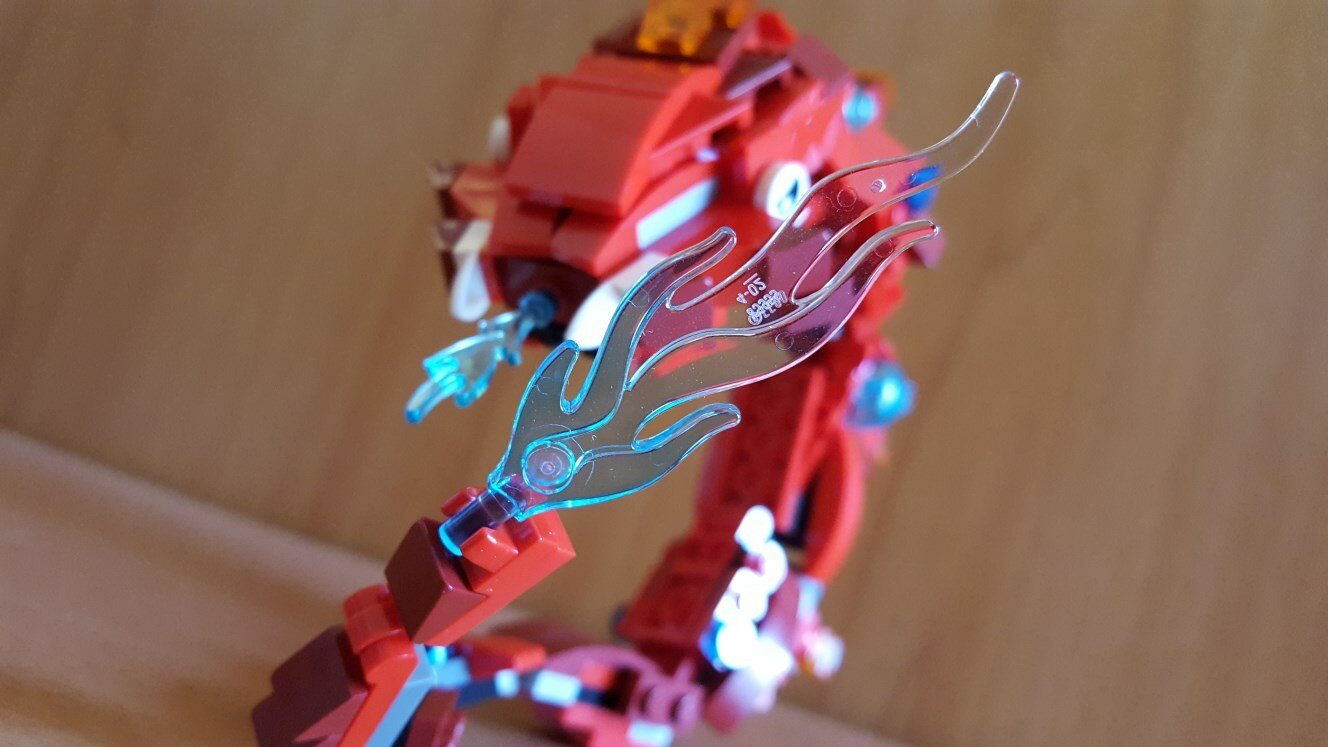 If a Water Slasher feels in danger, he spits a powerful spurt of water from his tail (or mouth, resulting in a slightly less powerful one) to his enemy, just to suddenly disappear in the waters right after. The spurt can be so strong that it can, in some cases, cut through someone’s skin, and generally cause quite a terrible pain. 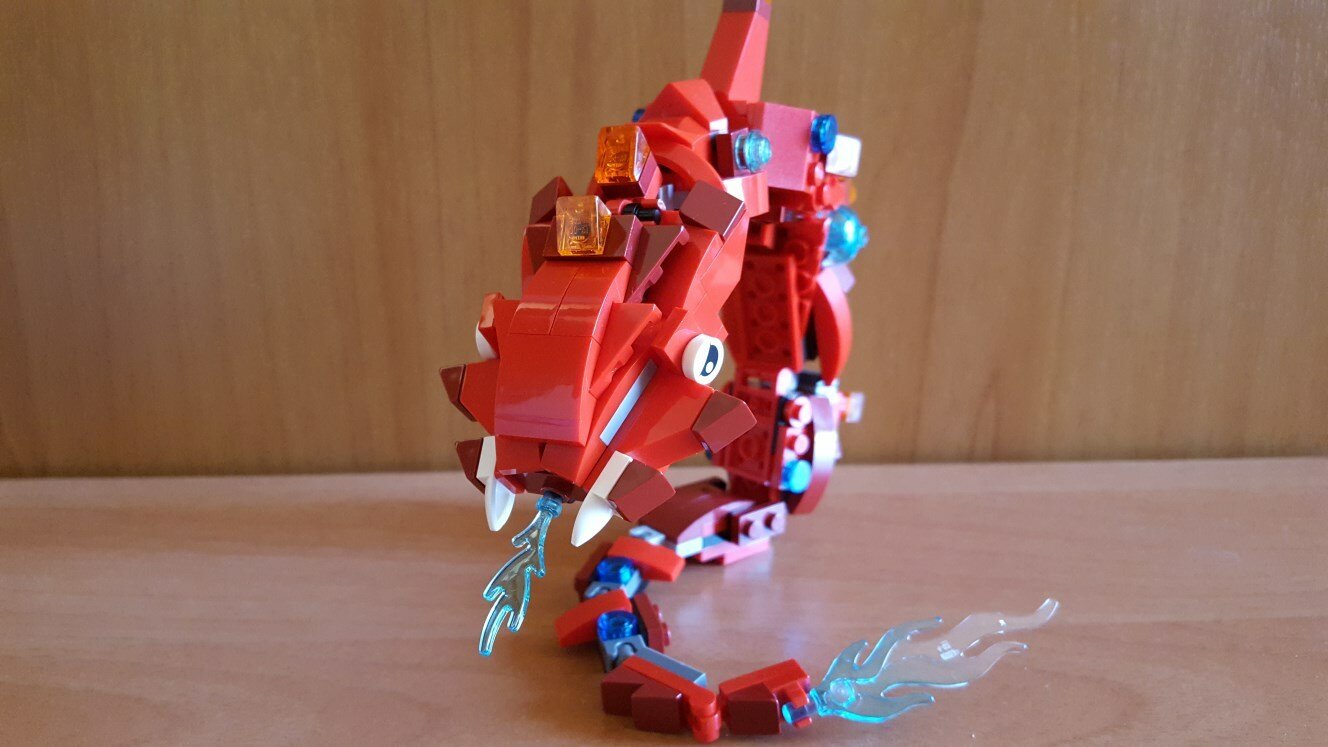 I designed this serpent one “section” at a time, from the head to the tip of the tail. I wanted it to look good mainly when posed in the standard pose (^^^^) I use on display, so articulation isn’t exactly the best here. However you can fully straighten it, and it is quite long! It’s about 45cm long. 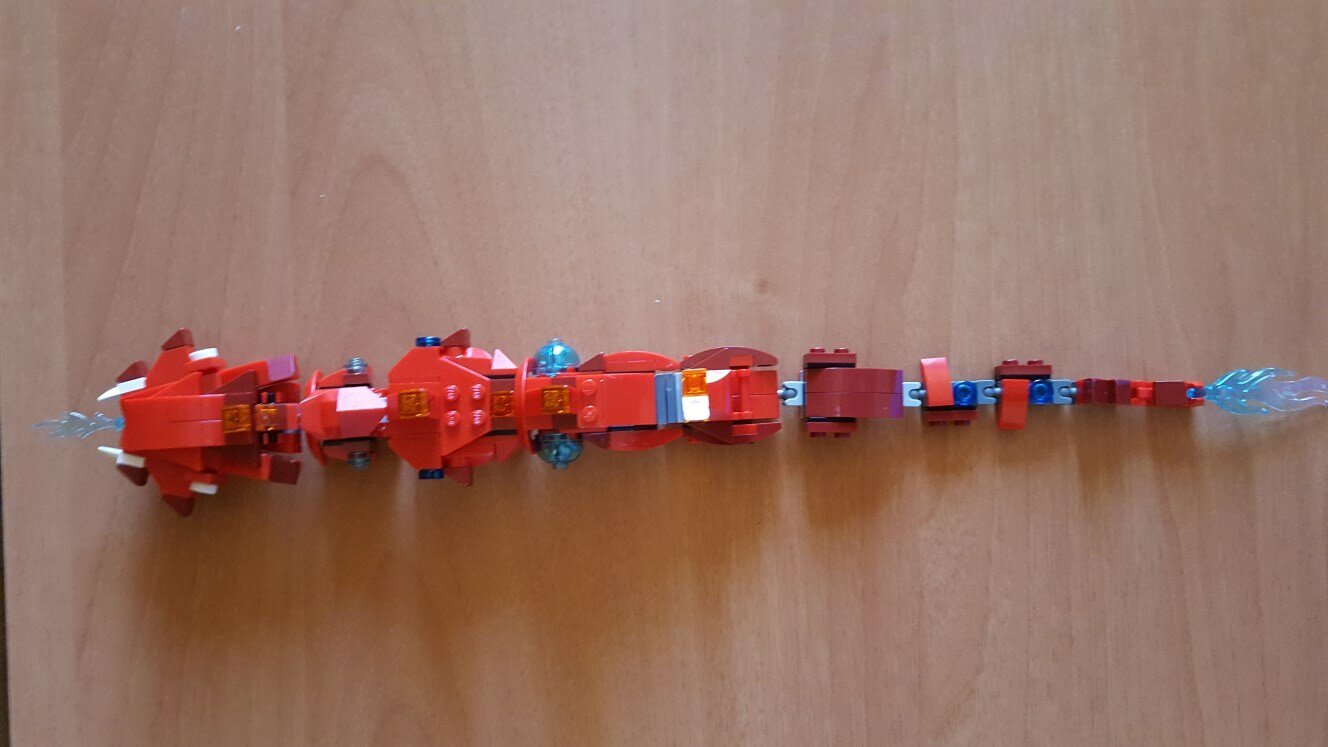 The head is what I am particularly proud of, so here’s a closeup. 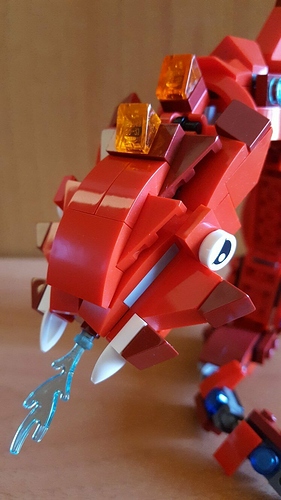 I hope you like it too because I spent a lot of time (15 minutes) designing it.
Here’s also a front view too, because why not. 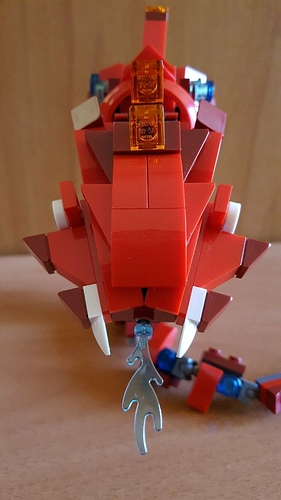 If you are interested in the design, here’s also a look at its inner build. The first one to figure out how it’s put together wins a cookie: 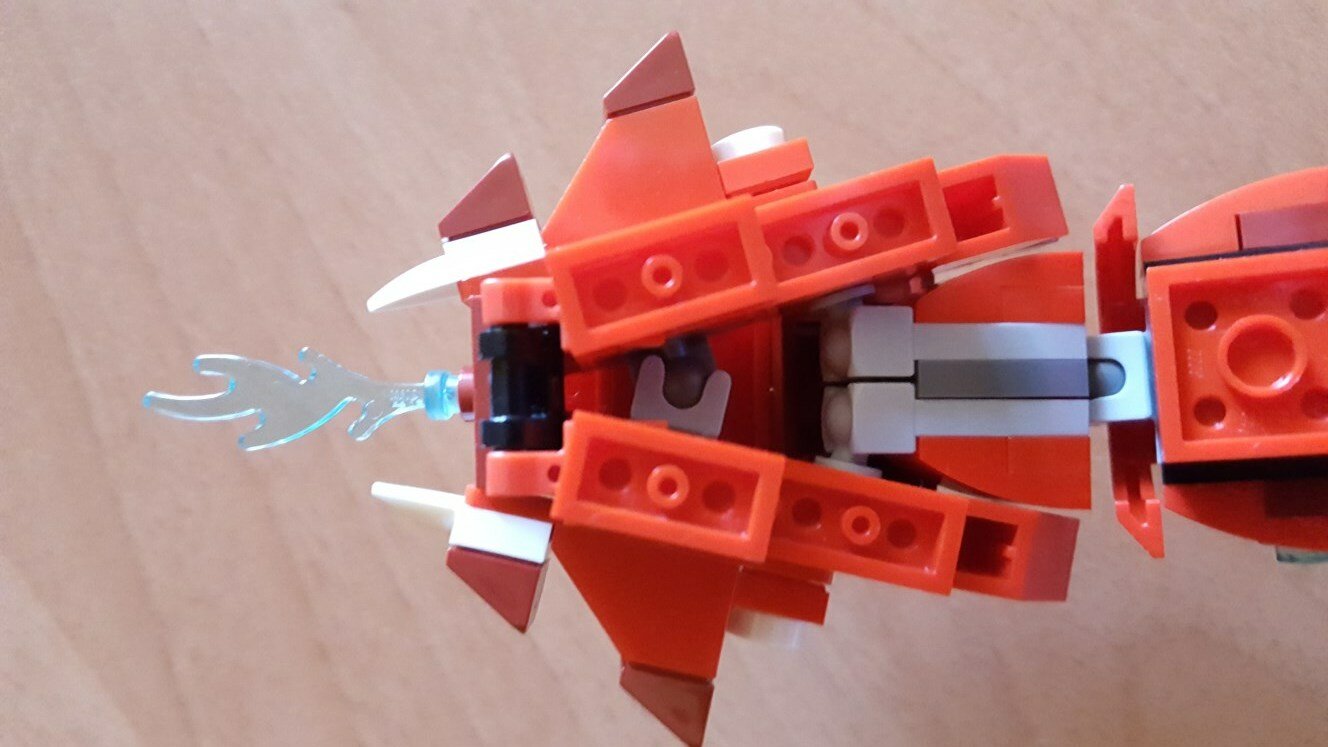 And that’s basically it! I had a ton of fun making it, and I hope you like it too.

Here’s the one I posted before this:

Oh, gosh, after posting that Makuta MOC (which, if you read the post, you'd know I didn't really like) I can finally sit back and talk about what I can do really well (A.k.a my Mixels MOCs)! This time around we're going to take a look at a very particular kind of creature, the Twilight Catcher! [image] This creation, as always, is made out of six Mixel characters, in this case the Orbitons snd the Glowkies, both from series 4. [image] [image] Twilight Catchers are very unique animals that live in the frontier between light and darkness, day and night, life and death. Those ghostly creatures inhabit the ponds close to a huge pine forest in the northern wastelands, and if you are foolish enough to find yourself in this area during the day, you would only find their withered…

Very cool, I love the shaping.

This is amazing, reminds me of shiny gyarados too.

This is both a snake and a firehose. The two were meant to combine to form this masterpiece.

You pull of the serpentine look fantastically…

This is first time I actually think the Mixel Eyes look threatening and not silly.

@Zero the second best thing about posting my creations on the boards is reading your comments, they’re always so fun and creative! Thank you so much!

@Jayfa Thanks! knowing the pieces is actually one of the main reasons why I often make combiner MOCs, rather than “regular” MOCs. I feel like parts limitations is what makes me create better inventions.

@EvilLobsterKing Thanks! Fun fact: I actually started the MOC with the intention of making a big lobster

, but as you can see, I changed my mind, because there weren’t enough joints to make all the legs.

@MakutaTexxidos Thank you! I thought the same thing when I finished the head.

I am EXACTLY the same, I’ve actually never ordered parts from bricklink to make a MOC for that exact reason

the moc is quite cool, I’d actually like to see what it would look like if you attached arms to the second body segment (the thick one).

Personally I only buy parts from Bricklink for specific mocs if the moc is already technically finished, it just needs some things I already know work.

Thats a fair call yeah, Ive actually been tempted to order a custom white nuva shoulder with some gold accents for my self moc

@EvilLobsterKing Thanks! Fun fact: I actually started the MOC with the intention of making a big lobster

, but as you can see, I changed my mind, because there weren’t enough joints to make all the legs.

That is actually a really great idea. You might have given my Brian an idea type thing.

And I’m sure if you ever did build a Lobster, it would look amazing…

@EvilLobsterKing well, I’m happy to inspire people! I may try to make a lobster again in the future, who knows?

@Omega_Tahu while I was building it, I actually tried to put wings on that section, but there weren’t enough pieces to make two of them, so I scrapped the idea. It looked pretty good though.

Cool. I like this kind of take on a dragon/serpent thing.