An unnamed opening to a story

I recently had to do some English homework, which was writing the opening to a story based on an image, this is the image in question. 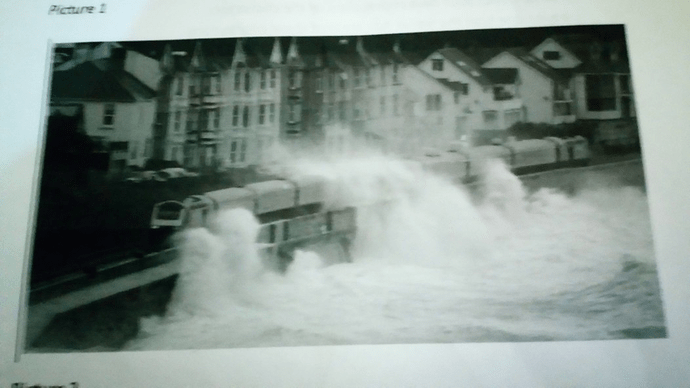 We live in a world where we’ve tried to tame nature for own usages, From using the Earth’s precious water to power our cities, feed our crops, quench our thirst, or to bathe away the dirt, sweat and musk which has up over the days. But while we use water every day, Mother Nature has a sick way of toying with us, using the very thing we use the most. From harsh storms flooding our land to blowing heavy wind our way, forcing the water to attack us.

Today was such a day, where she was truly vengeful, I wasn’t sure if she woke up on the wrong side of the bed or if her boyfriend left her, but judging from the cold waves splashing against the side of the carriage, I can tell that she’s furious today and she was releasing her anger on me… again.

For you see, I am what you would call a Guard. I have had many other titles bestowed upon me by many passengers, “Conductor, Manager, Host” to name a few. During my 10 years working on various different trains, I always had the feeling that Mother Nature had it out for me. It’s terrifying thing to believe, but I digress, I have gotten used to the constant thunderstorms, blizzards and harsh winds that she throws my way.

I decided to stop thinking about all the weather I’ve had to cope with over the timespan of my job and decided to check out the weather I am dealing with right now. Carefully I walked towards a nearby window to scout the vast ocean and how terrifying it can be to be on boat at this moment in time. The waves were crashing upon the floodwall, trying to crawl onto land and flood the houses overlooking the vast blue duvet, even succeeding at points and leaping over it at points. I could also hear the pitter patter of raindrops upon the metal roof of the carriage, the sound could be relaxing for some (such as me) and annoying to others. The next thing I did can be seen as dumb to some people, but I carefully pulled down the window, hearing the harsh winds at full volume, blowing against my face and knocking my hat off, revealing my short blonde hair to those who could see it. I then slowly peeked my head out and was instantly soaked by the shower of rain, I then looked to my right, only to see an unfortunate sight. The waves had become stronger than I thought, and have made their way onto the roofs of the other carriages, scaring the anxious passengers trying to get home, it’s and unfortunate sight to see and it let me know how mad she was today.

I then instantly reeled my head back into the train shut the window with great force, I then proceeded to collect my hat from the floor and contemplate the bleak future of this journey.