Andrakis manifested his power before anyone in the Trodax Clan. He, as resident in his egg during his birth-phase, consumed his physical appearance, thus making himself almost immortal. He joined the Legion of Anamis, plainly by sneaking in somebody’s shadow. He developed his shadow-possession there, striking terror into the hearts of his enemies. After Eddie fled from the General, he joined the Clan, capturing a member of the Legion, and after suppressing the victim’s personality, he morphed the host body to his liking. He fights from the shadows and makes himself impossible to hit without his body. Another surprising fact about him: he has no shadow. (Because the shadow can’t have a shadow.) 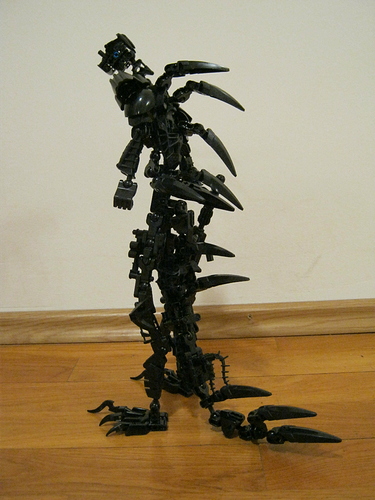 Obligatory headshot, the only blue pin used there for the eyes. Also, he has minimal other colored pieces.

With his sword, Shade. The other bright colored piece is in between the hilt and the blade itself. Sorry for the eye-sore there, I couldn’t find a black piece of that.

The tail is one thing I’m very proud of.

Also, there is my drawing showing his power actively used:

Sorry for the poor quality there.

Let me know how could I improve this guy!
-Eddie

Edit: @Xing1870 made a pitch-black MOC inspired by Andrakis, you can find the topic here: http://board.ttvpodcast.com/t/the-nuumrak/18414

I love shadow creatures like this, so props to you!

He’s really creepy looking, and I like the spikes.

His hands are really humanoid, though. I’d expect long arms with claws.