Another G3 Rahkshi Designs and Pitch

I’m gonna make this and probably quickly discover there was somewhere else to put this, but I’ll let someone who knows what they’re doing deal with that. I felt like I’d put my two cents into what the Rahkshi could look like in G3. I really liked the concepts being tossed around by other artists and TTV, especially the idea of the Rahkshi cultists being rahi hybrids.

TLDR at the end

The skulls and bone armor are there for a couple reasons. Firstly, I thought they’d help them stand out from the “good” characters while also making them feel almost more primal. Secondly, it could be seen as maybe them trying to pay tribute to Makuta, who they may see as almost a god of death, as they don’t understand his true motives.

Quick pitch for each one, I’ll be adding pictures for each of them over time.

Vorahk
Once a renowned doctor in the earth cities, Vorahk was banished after doing illegal tests and experiments on his fellow Matoran. Vorahk now brings poison and sickness, weaking physically stronger opponents before finally taking them out. Vorahk would be a snake, swift and strong, able to avoid the stronger and larger Onua. 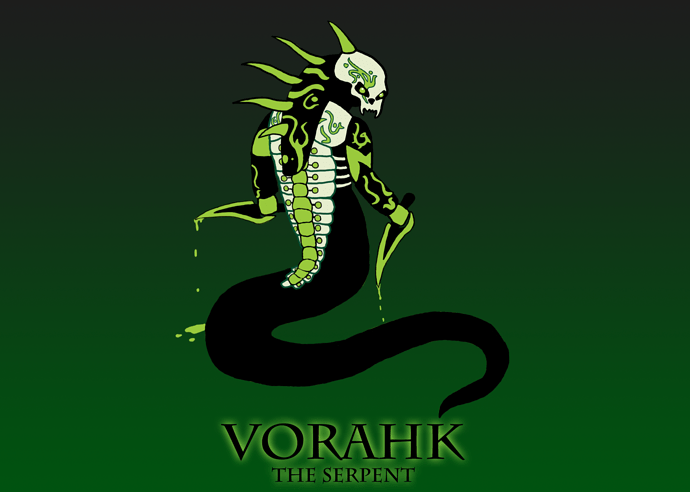 Lehrahk
Pretty much the TTV pitch, orphan and thief turned murderer and terrorist. Power change would be a power or life drain ability, with Lehrahk now being able to literally steal away the energy from another, contrasting Lewa’s whole “learn not to steal and be good” moral. Lehrahk has a bat-like appearance (like a vampire bat), using life draining beams to attack those who cross him.

Turahk
Again, like the TTV pitch with just a couple twists. An established warlord for the city of fire, Turahk prefers to use intimidation to help her win a fight. Patience is Turahk’s favorite weapon, very different from the methods of Tahu. Looking like a mantis, Turahk uses her new power to generate fear, helping her keep her position of power in the cult of Makuta. (Tuhrak is female for two reasons. One, female mantis are larger and generally more dangerous, and two, a female warlard and rahkshi just adds more diversity)

Guurahk
Wanting her water based society to remain hidden and separate from the rest of the island. Because of this, Guurahk gains the power of invisibility, matching with her octopus-like appearance. Guurahk lack’s Gahli’s honesty and honor, being cowardly and always being willing to fight dirty if it’ll help her win.

Panrahk
Nothing really new here. A merchant turned scorpion who can create mirage-like illusions. No mind control though, too similar to the proposed Makuta idea.

Kurahk
Again, similar to TTV’s. Kurahk believes he should rule the ice kingdom and that if he can’t no one can. Now Kurahk wields the power of shattering or fragmentation to bring down the kingdom along with anything else in his path. Kurahk is large, similar in size to Onua, and is similar in appearance to a musk ox (so big ole horns) and lacks Kopaka’s patience and forethought, hence why Kurahk was deemed unworthy to lead.

TLDR,
Vorahk: former doctor turned bad who has venom powers. Looks like a snake.
Lehrahk: Orphan turned terrorist. Has the ability to steal away energy and life. Looks like a bat.
Turahk: A patient warlord who uses her powers over fear to crush her enemies. She has a mantis like appearance.
Guurahk: Wants to keep her nation separate and isolated. Can become invisible and looks like a squid or octopus.
Panrahk: Once a desert merchant, he can now create mirage-like illusions to trick his opponents to to their doom. He looks like a scorpion.
Kurahk: Wants to bring down the kingdom since he can’t rule it. Is physically large and uses his powers of fragmentation to destroy his opponents. Looks like an ox.

Feedback is appreciated, and I’l add drawings as I can.

I like your ideas. I think @Oomatu had lerahk as a serpent before, but I like having vohrahk as a snake-like character instead. Maybe lerahk could be an insectoid?

I don’t like the snake angle for Vorahk, but the artwork is quite impressive.

@PeppyBricks Totally with you there. I was thinking along the lines of a mantis, cause you’ve got the whole patience angle to counter Lewa’s headlong approach.

@DannyBoyy I get where you’re coming from what with Vorahk having nothing to do with venom in his original form is all. I mainly did it because I think having a snake fight Lewa doesn’t work if Lewa can fly. That and I think that someone who can win with a couple poisoned strikes would be an interesting counter to the more brute force Onua. That being said, I’m glad you like the art!

This looks really sick, in a good way.