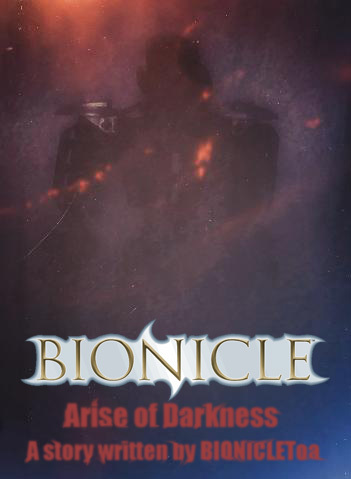 An insert from one of my stories I am making, called Arise of Darkness.

The two Toa shot me and Furtaan out of the sky. We crashed into a factory's roof, and we both where critically injured. Furtaan's leg was broken and had several other bents in his armor, and my left arm was bent and disfigured. The only reason I was less damaged was because I wore heavier armor than Furtaan. This also gave us a disadvantage, because I could not fly, while Furtaan was created with wings, so we partnered up to help each other. But now, it was each makuta on his own.

The Toa of Fire, with his Kanohi Lekma, the Mask of Resurgance, was after me. His mask allowed him to get stronger and stronger the more he was injured, so he was a foe that anyone would not dare to fight. And I was no fool. The only way I could get out of there alive was by fleeing from him. But with his Lekma allowing him to make his body more stronger, I decided I could never truly outrun him, if the mask made him more powerful than a Toa.

The only way I could flee from his is by slowing him down somehow. But I had no idea how to. This Toa was courageous and bold; He could figure out my tricks I could come up with. However, his pride seemed to overcome his wit. If I could somehow get his pride to make him not think about his ideas, perhaps I could trap him.

While I thought of this, Furtaan was having trouble himself. He was critically injured, and he had to deal with a Toa of Water who, while bearing a normal Elda, seemed overbearing to him. But it was survival of the fittest, and right now, I had to outsmart the fittest in this situation. Still, I felt bad for Furtaan as I saw him get captured by the Toa of Water.

I have some explaining to do. Makuta Teridax, our leader, had sent me and Furtaan to Xia to ask the Queen, Carika, about setting a base there. However, Furtaan broke the law by stealing from the Queen's armory, and now we are convicts on the run. Two Toa, who's names I still do not know to this day, had heard about us, and sent to capture us as criminals. Now I was the only one who was left, and the Toa of Fire had me where he wanted.

I ran through the factory, wondering if there was a way out of it. There was the doors, but the Xian guards would capture me, as well. It seemed I had to pull out an element of surprise. Teridax had given me a secret, weaker copy of the Kanohi Kraahkan, and he had told me to use it when I had to. I took off my Kanohi Shelek, and I placed the Kraahkan on instead. Instantly, I felt a cold shiver down my side. The darkness that was hate, fear, and envy filled my mind all at once.

So this is the Mask of Shadows... I thought to myself as I deemed control of it. Since it was weaker, it was easier to get used to. But I started to loose my care for Furtaan as he was taken away by the Toa of Water. I only seemed to care for myself, which was odd, considering that I usually put others before myself. But the mask said otherwise. The mask said I came first, and that others where my inferior.

Ignoring this, I see the Toa of Fire using his powers to manipulate fire to melt some of the boxes I hid behind. I used the weaker Kraahkan to emit shadow around the place. The Toa of Fire used his abilities so he could make a torch for himself.

Be afraid, Toa, I told him in his mind, be very afraid. I did not realize the mask could look inside people and see their inner immorality. I saw what the Toa had done; All the times he had lied to his teammates, the one time he killed someone and told nobody, the time he had coveted other Toa's powers, everything. At the same time, the Toa started screaming.

"NO! No more of this!" cried the Toa of Fire. It seemed the Mask, while looking at his inner sin, also reminded him of it, making him feel guilty, and permitted fear. The Toa stooped down to his knees, and I revealed myself from behind the boxes I hid behind. The Toa looked up, in fear. "Your mask looks different from earlier..."

~Note: This is the first draft of one of the later chapters in my story. I felt like I wanted to post it here to see if you guys enjoyed it. I want some feedback.~

its pretty good so far