Let me present to you Artakha the Loresmith, the creator of mysterious artifacts and the wise one who knows answers to all questions. 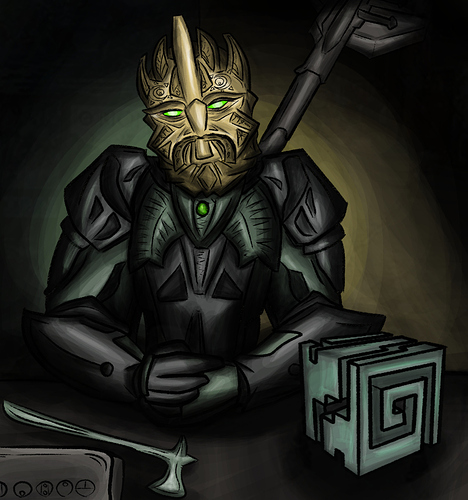 artakha994×1060 275 KB
The gold of his mask creates nice contrast with otherwise dark-colored original MOC. My inspiration was mostly combination of Avohkii, Ignika and the G2 Mask of Creation, but I also aimed for general sense of age and wisdom.
I wanted to keep his mysterious feeling by using strong shadows and vague surroundings. His Great Hammer is on his back, while the smaller, more elegant one he uses for his smith’s work lies in front of him. I wanted to include something he had created in the picture, so I opted for the Nuva Cube, which is one of the most mysterious and inspiring artifacts Artakha had created.
Here’s closer look at the mask.

This Artakha reminds me of my father. The look is kind and the posture is confident. This is absolutely what I imagined him looking like. The golden, beautiful smile makes me feel warm inside. You have managed to make him feel more real than any other contestant so far.

Thank you for this kind creation.

4. A minimum of two (2) images must be provided. One of the mask, containing the front, side, and top view, and one of the winning MOC wearing it.

You need a top view, btw.

Not one of my favorites; it’s very dark, and doesn’t show much. I get that that’s what you were going for, but I don’t personally care for it.

The mask is an old man’s beard

I like how he has two hammers and the Nuva Cube. Your decision to place him in this setting at a worktable rather than some kind of standing action pose was a unique one, and it suits the character much better. Good luck!

This is very much how I picture old Ilmarinen. How he teleports masks around and then sits down to wonder what life will bring to him. The nuva cube is my favorite artifact in bionicles and I love Kal arc. I wonder if Artakha is now making The Great Disks or Nuva masks…

This Picture Emits Its Aura Of Deep Wisdom Onto Me, Its Like I Could Ask Him Anything And He’d Have The An Answer, Like He Thruly Knew The Secrets Of The Matoran Universe And He Could Tell Me Everything I Want And Don’t Want To Hear. A Truly Magnificent Drawing Of The Creator Of This World. Definitely My Favourite Thus Far.

I gotta be real, I don’t see a smile here.

It must be like one of those optical illusions, where once you see it, you can’t unsee it.

But I’m still stuck at the “can’t see it” phase.

Could anyone provide an image with an outline of the smile?

So you think that the Mask of Creation looks like Greg Farshtey’s face, interesting choice.

This Artakha reminds me of my father.

Is Greg Farshtey your father? 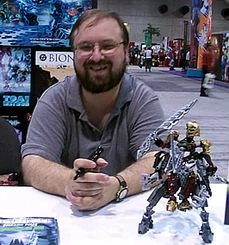 I knew that the pose was familiar, I just couldn’t find the picture, but the drawning is clearly based on this pic LMAO

I think this is an excellent tribute! I will probably vote for this one.

be us, bionicle fans

This is a formidable entry, probably my favourite out of all of them. It uses simple details to display the personality and history of the portrayed character without being overtly referential or meticulous to the point of pure fanservice.

First of all, the two visible hammers, the one included in the MOC and the smaller, practical one emphasize the duality of Artakha’s role in the universe. First of all, he’s a mythological, divine figure, as shown by his personal hammer which is impressively immense, but probably too enormous to be used as a tool. Right now, Artakha is keeping it behind his back and focusing on the smaller one; we are not seeing him as a god but as a craftsman and taking a closer, more secluded look at this legendary being.

The somber, visceral atmosphere also augments this emotion. The Nuva Cube Artakha seems to be scrutinizing, perhaps having just finished its construction, can be seen as a symbol for all of his endeavors. The bifurcated colors of the background seem very meaningful: the gold, also the shade of the mask Artakha won in the duel with his brother, can be thought of as the representation of his current state and occupation in the universe. The green, on the other hand, seems to refer to either his past, being the main color of both of the brothers – or perhaps just Karzahni, who is strongly associated with the color.

This tension between Artakha’s status as a deified, masterfully powerful entity and the artwork’s references to his past and the life he might have lived if things had ended up differently expresses an interesting story. How does Artakha feel, crafting all of his wonderful creations? Is it solitary work – does he feel lonesome, does he miss his brother? Does he even fathom the cosmic significance his creations will come to serve?

In my opinion, in this regard, this artwork stands above the competition – it not only exhibits the character in a setting that is natural for him but also incorporates lots of details that portray a compelling narrative. This entry genuinely represents Artakha’s character and role in the surprisingly deep BIONICLE storyline.

Wow - I didn’t think about it like this. Very well said.

I noticed the two hammers, but this explains the deeper thought by the artist behind it. This kind of art is what Bionicle deserves! I wish we had more deep reviews like this one.

I love lore. Hence I love the Loresmith.

I feel as if this Artakha is the answer the entire fandom needs, to a question we didn’t even know to ask! Splendid, utterly splendid, old chap!

Nothing would bring me more joy than the thought of good old daddy Greg taking a look at this!

On more serious note, what a great first round, let’s see again in the next drawing contest. I promise to give you something just as good, if not better, than the Gregtakha. Ideas are bulletproof, Mr. Creedy.