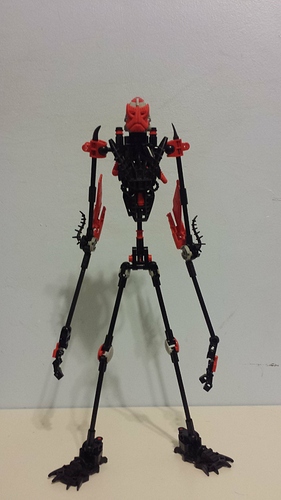 Once a respected Toa of fire, Atrox fell into hard times when he fell ill with an unknown disease. Gradually as his condition grew worse, he sank into dementia. Late one night, he lost all control of his body and murdered one of his fellow team-mates. When the others discovered his hand in the murder, they banished him to the caves, where he would live for the rest of his life. In the caves, he found many thing, but most notable was a lone shadowy crystal. He broke off a chunk of crystal, and carried it around with him as he explored the vast cave system, hoping for a way out of this torment. Unbeknownst to him, the crystal slowly worsened his dementia, and soon began altering him physically. He started to transform into the monster in his head, the one that killed one of his fellow toa, and betrayed the code. Some still say that he lurks in the caves, whispering to the crystal of shadow in mad, hushed tones, slipping further and further into insanity. 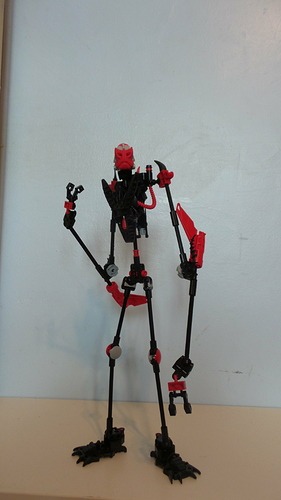 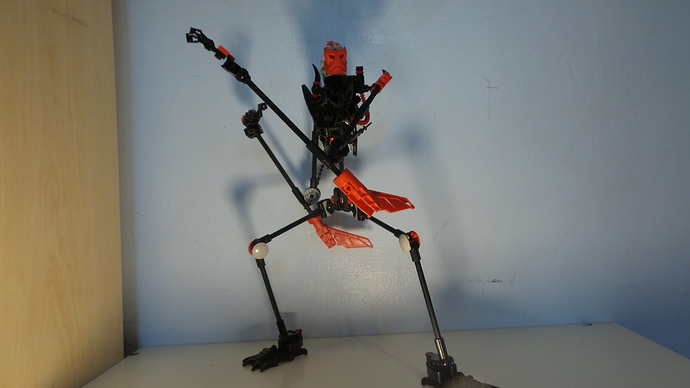 Close up of the back build 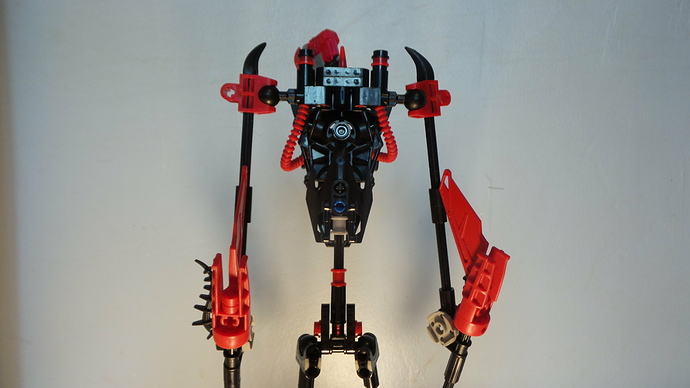 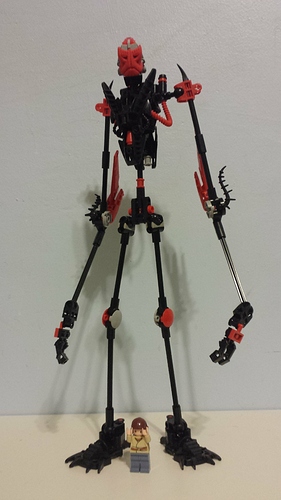 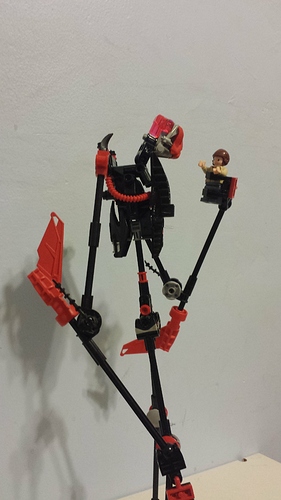 My inspiration for this was, fairly clearly, to build a disproportionate and lanky character, using a Krana as a mask. This has always been on my to-do list, so I’m glad i finally did it. He is also my tallest moc yet, (although that’s not saying much) and he stands a good a good bit taller than Inannus, so I am pleased with that.

P.S. His name, as well as my other Moc, are from Latin words of their characteristics in case anyone cared.

Pros: - Super unique. I love this look he has.
-Color scheme is solid (if a bit overused)

Thanks! Unfortunately, that it the only krana i have, so i had to make do. I just noticed he has a little frown

Oh no, the cons section was kind of a joke, because lanky kong was the first thing i thought of

A cool design. The arms look a little odd from certain angles, but good job on the whole.

Very unique and freaky. The jet/wings on his elbows are a bit of an eyesore though

I just noticed he has a little frown

Thank you for the nightmares.

Thank you for the nightmares.

Pretty much sums it up.

It’s weird and different, and carries the aesthetic well. Not a big fan of how the elbows look when his arms are bent, but that’s only a minor nitpick IMO.

I would use the excuse of “It’s supposed to look strange,” but i honestly kind of have that complaint myself, although i’m just going to leave it.

That seems like the best thing to do. They look good when the arms are outstretched, and fit the idea of a twisted and demented being.

Very spooky indeed. How big would a human be compared to this thing?

That’s a really good question that I don’t know the answer to.

I think mini fig or micro fig would work well.

Let’s not go micro don’t want to be too scared do I?

Then what about minifig scale?

Guess that works fine. If I find a mini fig I’ll post it for scale

This is so tall and skinny.

The only issue i’d have with this is the ammount of black, could aways use a bit more of red.

Other than that, it’s pretty clever and i like it.

This sounds like Gollum from Lord of the Rings. Extremely like it actually. Now all he needs is a split personality.