Azar-Hal, Angel of the Shadows

Many people say if you need help or guidance throughout a journey during the night, be sure to keep a black feather near your heart. It makes it possible for Azar-Hal to reach you and protect you from evil beings in the dark nights. When the night is over and the feather becomes white, then you’ll know she helped to prevent danger. 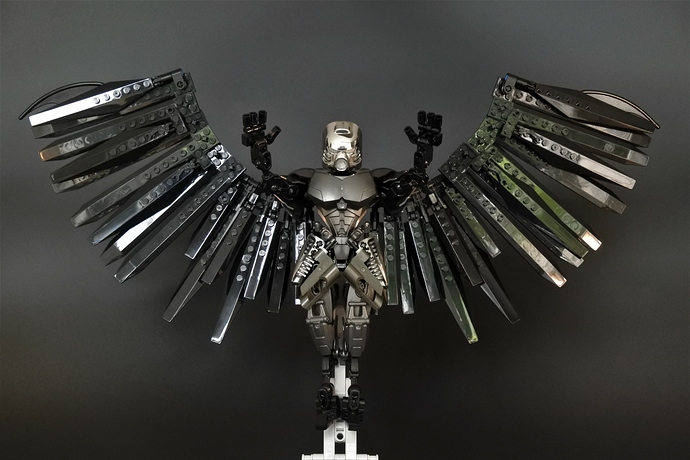 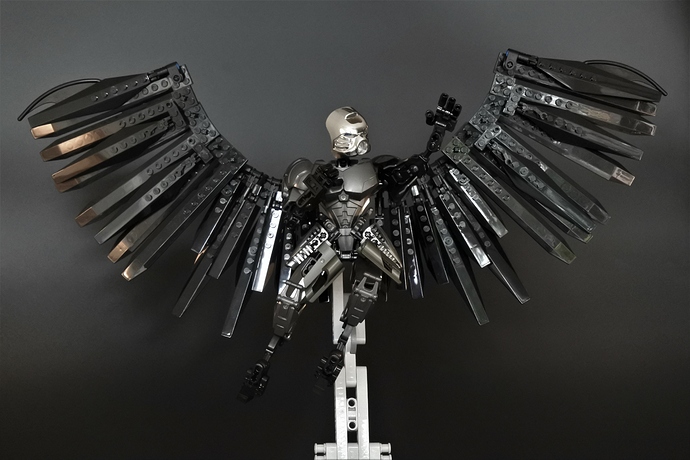 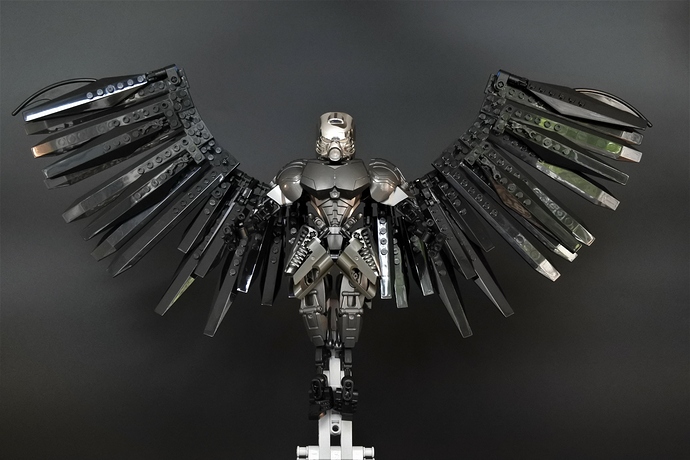 everything is done with official Lego parts!

This is truly beautiful. I love how the light reflections off the wing compliment the mask.

This figure is imposing, orderly, and powerful… In the third photo. In the other two, movement has revealed the simplicity of the build. The limbs are all slapped together (albeit cleverly for the lower legs) and the arms can’t get much more simplistic in terms of construction.

While the wings are smartly put together, they come off as incredibly clunky and clash with the rest of the model. It’s like the figure is standing in front of some wing-shaped architecture.

And sadly while the inclusion of the chrome Hau is stunning, the only part that really matches its appearance are the occasional reflections on the wings. I would recommend searching your collection to see what chrome pieces you possess, and working to incorporate more chrome elements into the piece, particularly close to the head. An obviously custom torso would do wonders for this, seeing how many chrome pieces you could fit into small gaps in the chest and around the neck. Stacking the plates that make up the wings as opposed to laying them side to side may make the wings appear less cluttered, although the visual style would definitely be drastically different.

The thing that struck me the most was the creative parts usage for the skirt and the completely out of left field hand design. It shouldn’t work as a good-looking hand, but it does, and I applaud you for that.

Thank you for this ‘‘Review’’, I would say

I got no other chrome pieces to use, if I had then it would be a great idea to add more chrome into the build.

I can’t really do much with the wings, adding pieces will make it too heavy and will drop by itself. When placed differently, the wings wouldn’t be as big as they are now. Any tips are welcome of course. Besides all that i’m proud of what I built. (it was my first wing design)

While building the firgure I went with ‘‘less is more’’ and i hope that came across, sorta

But thanks for liking the skirt and hands!

The moc is great, and gives off the look of an idol rather than a figure, but I don’t think that’s a problem. As Ghid pointed out, that hand design is really wild, and I didn’t even notice it till he pointed it out. Though, I think the best part about the moc has to be those three sentences of flavor text. The concept paints such a strong image, and the moc really fits the description. Awesome job.

I like this but as others have said it does lack in areas. I think the wings should be attached a little higher and that they are too square-maybe study the shape of bird wings and implement changes from that like making the feathers splay at the wing tips?

It looks alright, but the wings are not only really messy and clunky looking, they just look like a bunch of salvaged Nu Gundam funnels glued together.