There’s a bunch of Okotan writing throughout JtO that I haven’t translated myself. Has anyone translated them yet?

Seeing as there are the Uniter/Nuva symbols on that building, having the Toa’s names on pillars nearby doesn’t seem strange.

I translated it all a while back - just scroll up a few thousand posts.

It’s basically just the names of the locations (eg. Great Forge written on the Forge) or the name of the region’s Toa. I seem to remember there’s writing in the Shadow Realm thanking the fans, but that’s the only interesting bit…

I’ll try to find it.

Remember when this thread was the most active one on the boards? XD

Well, assuming that this Temple of the City is tied to the Toa because of the names and Nuva symbols, I’d say this building was the second Temple of Light built to record Prophecies previously revealed in Agil’s original Temple of Light.

(SPECUALTION)
Maybe after the destruction of Agil’s first Temple, the Okotans (Mask Makers?) built this Temple so they could summon the Toa (without the side-effect of losing their memories), show them the Prophecy, and guide them to their destiny.

After being sucked into the Shadow Realm, Makuta realized he could use this Temple to create a Portal to help him escape. However, he needed certain elements from the World of Light to help him activate the Temple and create the portal.

Meanwhile, the Protectors used the Mask of Time in the Temple of Time, causing the Toa’s memories to be wiped.

(However, this idea confuses me as it would mean Gali would have been reading the full Prophecy right behind Makuta’s back as he bragged about his imminent victory to his minions.)

(However, this idea confuses me as it would mean Gali would have been reading the full Prophecy right behind Makuta’s back as he bragged about his imminent victory to his minions.)

That’s one of the biggest issues I have with the G2 finale. Along with the whole episode.

I just realised the Toa literally won because of plot armor.

there’s writing in the Shadow Realm thanking the fans, but that’s the only interesting bit…

It was actually in the Forge/Temple of Light. It said “You are all amazing and thank you for supporting BIONICLE.” (This picture is brightened so it’s easier to read.): 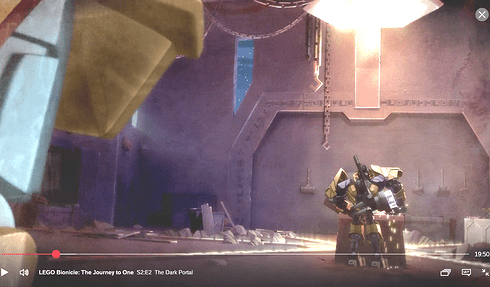 Omg I just noticed something…

Look at the masks on the left side of the wall.

#IS THAT THE GOLDEN MASK OF SKULL SPIDERS?
And what is that mask next to it?It looks kinda like Gali 2015’s mask…but that wouldn’t make any sense.

It looks more red to me like in the 2015 comic on the back of the box.

IS THAT THE GOLDEN MASK OF SKULL SPIDERS?

And what is that mask next to it?It looks kinda like Gali 2015’s mask…but that wouldn’t make any sense

Did they make the GMoSS canon…?
It does look like it, though it’s a bit short. The one next to it looks like a Skull Mask, which would make sense.

where is the gold?
am I colorblind? I can only see a red one and a blue one 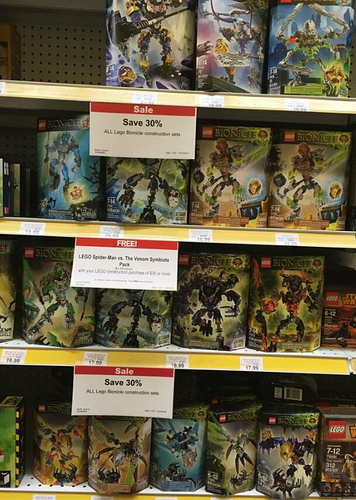 Well it is Black Friday.

I check and theirs bunch of 2015 skull villians and no Quake Beast, just wow.

Wow! I really need to take advantage of some of these deals! I’ll try (hopefully) within a week or two. When does the sale end?

I’d be happy if I had more money. Then I’d go into Scarilian mode.

I havn´t seen a single set at a discount here in Sweden. Even though it seems to have sold so bad that they aren´t even distributing some sets over here.

They’ve taken them off shelves in my area. I suppose I could go 45 minutes down the road, but I’m not that devoted anymore, unfortunately. I’m also broke.