Bionicle: Battle of the Monsters

Battle of the Monsters

Side-Note: Thanks to @Styrofoam with the beginning of the dialogue.

Kallus chuckled, "A Toa? How disappointing, Master. I was hoping for something stronger.”

“No no no, my dear friend”, said Fraga. "He and his cohort of promoted Matoran see themselves as protectors of the weak. Isn’t that right, hero?”

Bokarda let in a shallow breath before he spoke. “I’m not a hero. I’m not a protector. I’m not even a Toa. I’m a monster." His head was bowed as he answered the Skakdi, his eyes glaring angrily at him.

Fraga’s smile did not waver. The Skakdi crossed his arms behind his back as he scratched his chin with one of his smaller hands. “You think I don’t know that…Bokarda?”

Bokarda was prepared by what Fraga had said. “…How do you–?” He was cut short by Fraga’s answer.

“–know who you are? I helped make you. Or rather, unmake you. Hard to tell really, given the induced madness from the Hordika venom. Do you remember?” Fraga tilted his head to the side, raising his chin.

Something within Bokarda began to burn. He had felt this type of anger before, the type of anger that even his body could feel. This was beyond what he knew. It was as though every bone, every sinew of his mutated and enhanced being was crying out in pure, unbridled rage. His breathing slowed as he tried to suppress it, but even his breath let out muted growls.

Fraga looked over to Kallus, his smile still stuck on his face. "He remembers, Kallus.”

Kallus cackled with glee at the revelation. “What now, Master?”

“Simple: we kill him. Fortunately for us, Toa have to follow a strict code preventing him from killing intelligent beings. It’s safe to say we count as intelligent, don’t you agree?”

Fraga’s smile vanished at Bokarda’s single word. The enthusiasm and glee once in his eyes were dulled down to irritation as he turned back to the mutated being. “Come again, side project?”

"I’ve never heard of a code the Toa follow. I’ve never been fully recognized by the Toa. They don’t even know I exist.” Bokarda watched as Fraga’s irritation shifted to a focused concentration, the Skakdi’s eyes looking to Bokarda’s sides.

“What does that mean, exactly? Should I be concerned?” Fraga’s bravado was wavering to the point that even Kallus’ smile was slowly disappearing.

“It means you’re not leaving. Ever.” 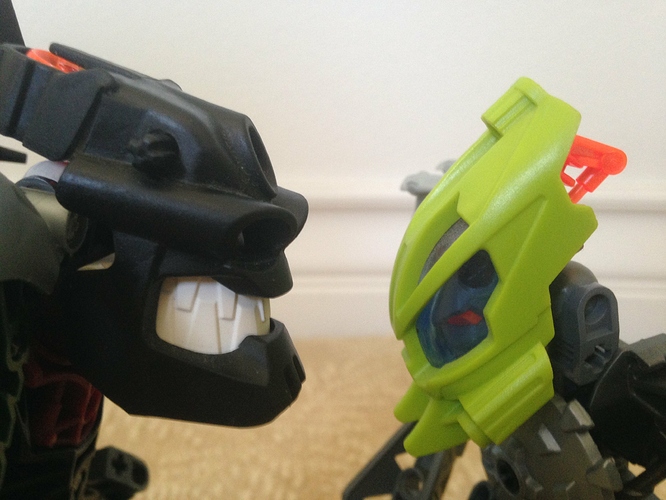 IMG_0057.JPG3264×2448 1.53 MB
The Battle of the Monsters was a duel near the Hot Springs of Spherus Magna between Bokarda and Fraga, Kallus, and the Zamor Beetle.

Summary
Fraga, Kallus, and the Zamor Beetle were on a hunting expedition when they wandered into Bokarda’s territory, Bokarda now mutated into a more natural form. Despite this drastic change, Fraga recognized the former test subject his late master had been experimenting on, and remembered the amount of time and effort put into him. After remembering Fraga, Bokarda resolved himself to kill the Skakdi and his mutated Energy Hound. 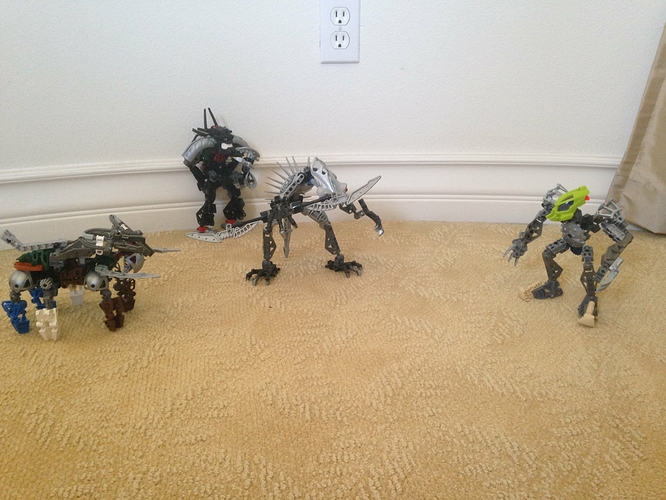 IMG_0050.JPG3264×2448 1.91 MB
The battle began with Bokarda going on the offensive, first confronting Kallus and the Zamor Beetle as Fraga observed. Kallus defended itself from Bokarda’s claws as the Zamor Beetle attacked from a distance. 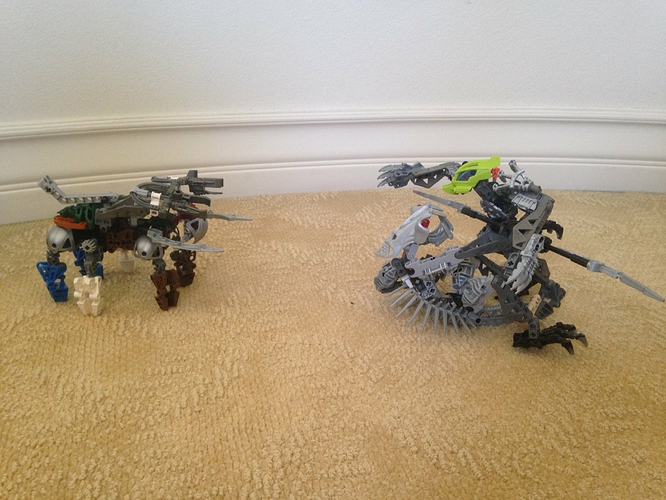 IMG_0051.JPG3264×2448 1.92 MB
Using mind-control blasts, it attempted to turn Bokarda to their side. However, the artificial Toa was nimble enough to evade the blasts, injuring Kallus in the process.
Now wounded, Kallus ordered the Zamor Beetle to repel Bokarda, which it did. While Bokarda could avoid direct contact with the blasts, the shockwave staggered him, allowing Kallus to catch Bokarda off-guard. Now on the defensive, Bokarda was able to fend the Energy Hound off long enough to find a weakness in his fighting style. Utilizing this weakness, Bokarda disarmed Kallus and threw it into the geysers of the hot springs, at which point Kallus escaped. 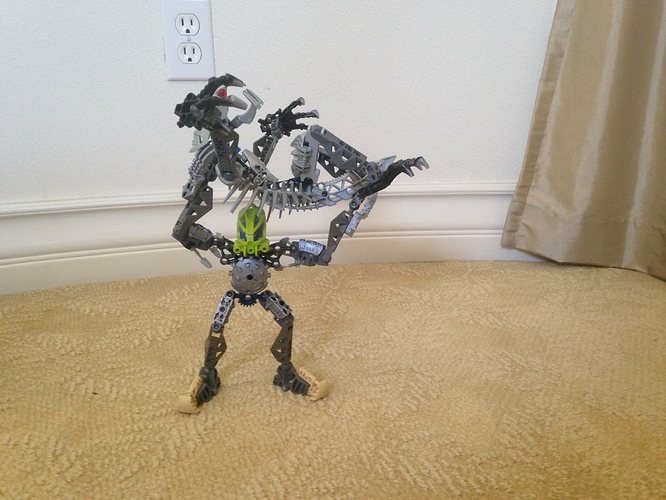 IMG_0052.JPG3264×2448 1.82 MB
Due to Kallus’ absence, the Zamor Beetle stopped attacking Bokarda.
Enraged by the loss of his servant, Fraga entered the battle and began to overpower Bokarda with his advanced magnetic cannon, creating magnetic fields around the Toa immobilize him. 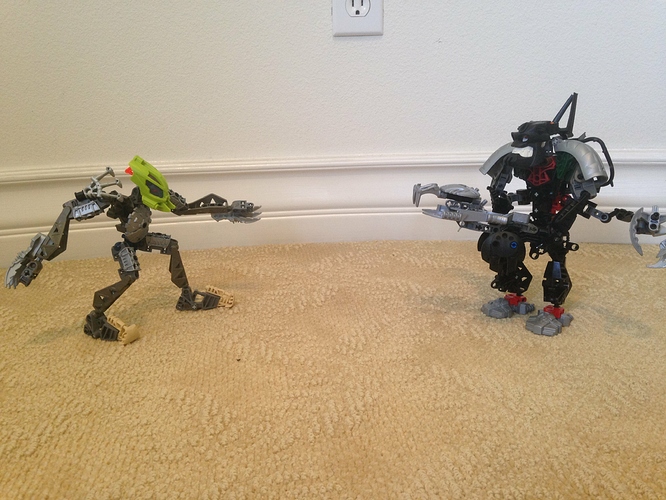 IMG_0044.JPG3264×2448 1.83 MB
Unable to move, Bokarda tapped into the power of his mutated Faxon Nuva and channeled the power of the Protocairn, sending a signal to disrupt the connection between Fraga’s body and mind. The Skakdi collapsed, allowing Bokarda to free himself from the magnetic field and go on the offensive.
Fraga recovered, abandoning his magnetic cannon for a modified chainsaw. He was able to severely wound Bokarda, prompting the latter to give in to his primal instincts. 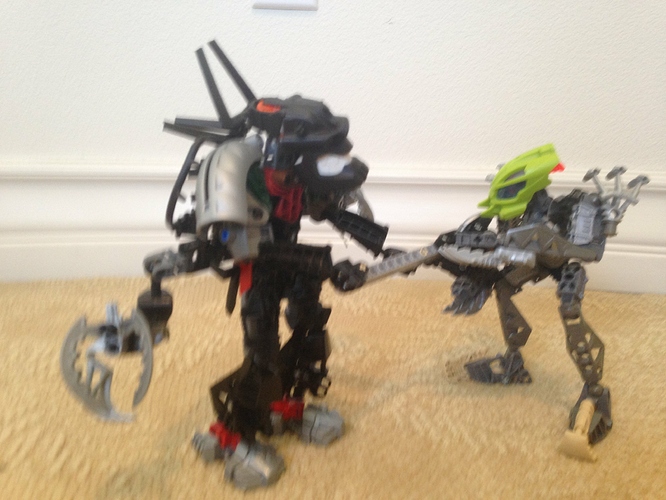 IMG_0046.JPG3264×2448 1.61 MB
Using the Faxon once more, he channeled the power of the Cave Fish to augment his size, temporarily reverting to his monstrous form. 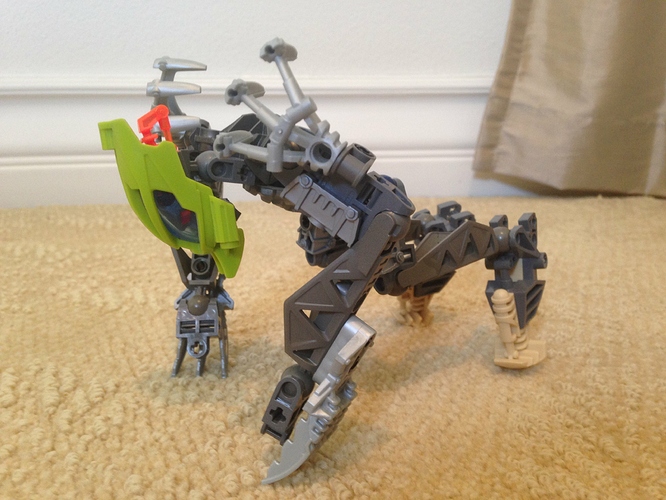 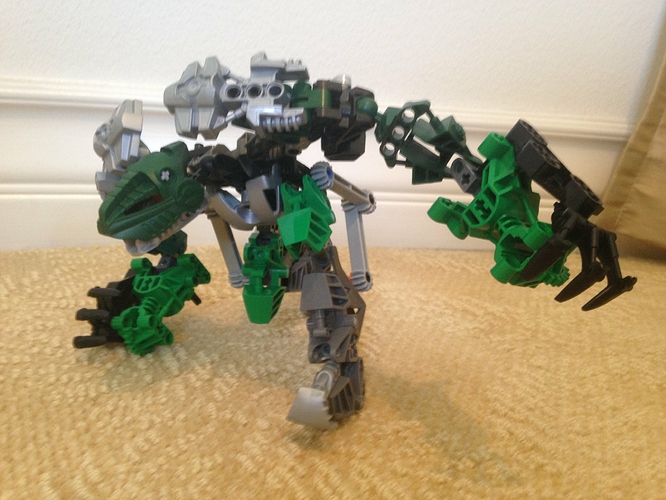 IMG_0048.JPG3264×2448 1.7 MB
Seizing the weapon from the Skakdi, Bokarda struck Fraga with it with such force, it sent him flying into the geysers of the hot springs. 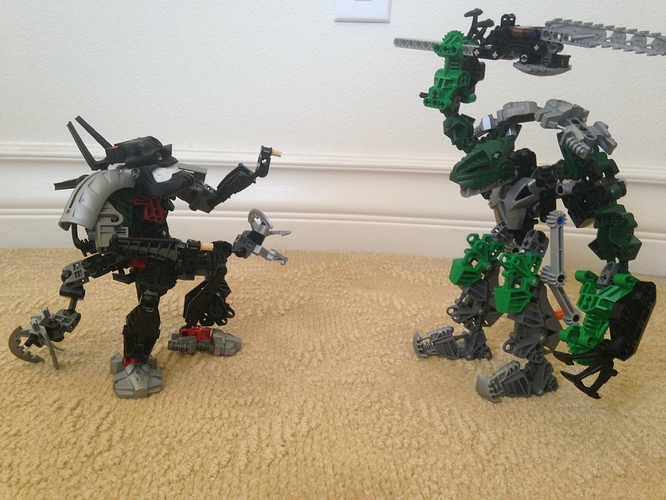 Aftermath
Now without a master, the Zamor Beetle began to follow Bokarda against his will. 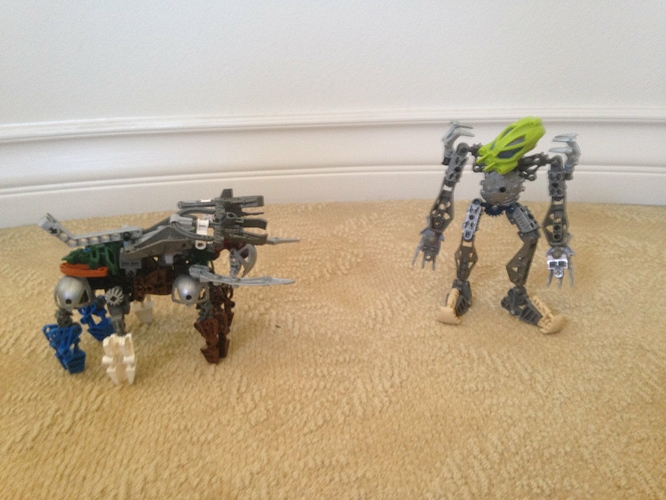 IMG_0053.JPG3264×2448 1.7 MB
Eventually, Bokarda bonded with the Rahi, becoming its new master. The two would go on to protect the inhabitants of Spherus Magna. 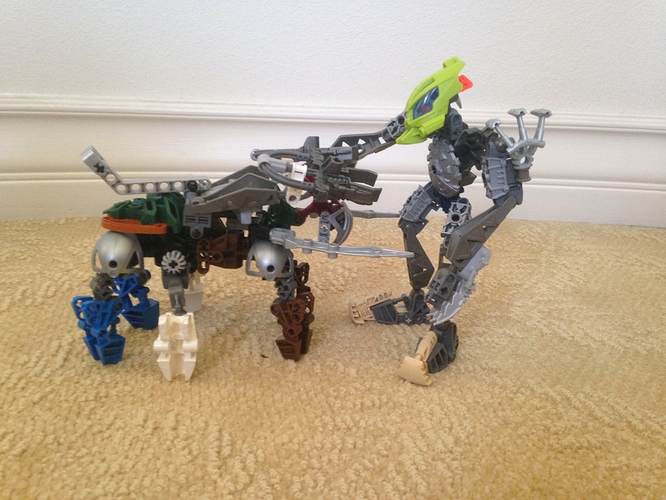 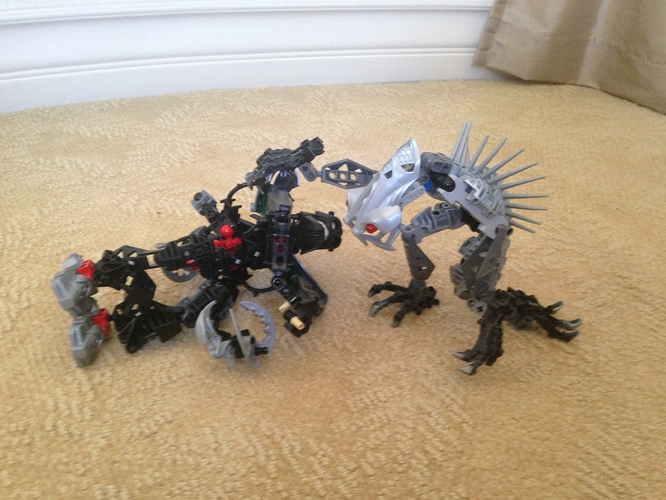 IMG_0055.JPG3264×2448 1.86 MB
The experiment succeeded, but Fraga was left in a vacant state, unable to perform any higher thinking. This resulted in Kallus assuming control, commanding its former master to capture new specimens for experimentation, attempting to reverse the brain damage. 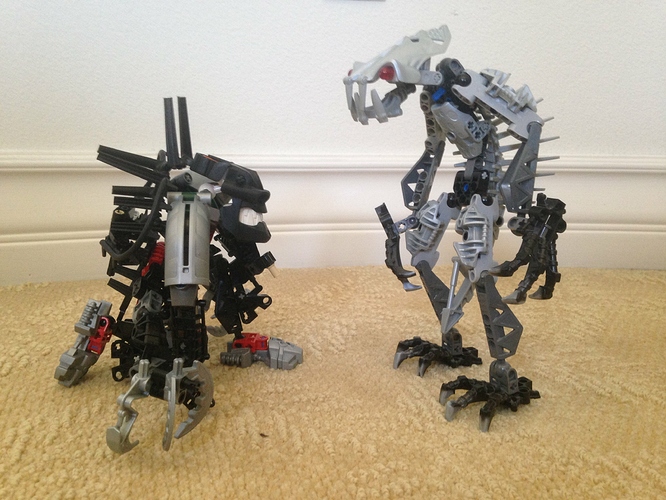 I think you should properly format the Dialogue to make it nicer to read. The pictures were a good addition

I think you should properly format the Dialogue to make it nicer to read. The pictures were a good addition

How should I format it?

Fraga: “Well, well. Look, Kallus. A Toa.”
Kallus: “A Toa?! How disappointing, Master. I was hoping for something stronger.”
Fraga: “No, no, my dear friend. He and his cohort of promoted Matoran see themselves as protectors of the weak. Isn’t that right, hero?”
Bokarda: “…”

Well, just as one would format it in a book:

Kallus chuckled, "A Toa? How disappointing, Master. I was hoping for something stronger.”

“No no no, my dear friend”, said Frega. "He and his cohort of promoted Matoran see themselves as protectors of the weak. Isn’t that right, hero?”

Could I use your example as part of it?