Hey,
So I was wondering what experiences people have with Bionicles/Hero factory during the holidays?
Ummmmm so to start things off, I remember getting Axalara T9 for Christmas in, I guess it would’ve been, 2008. I spent like all day making it, and it was real cool. 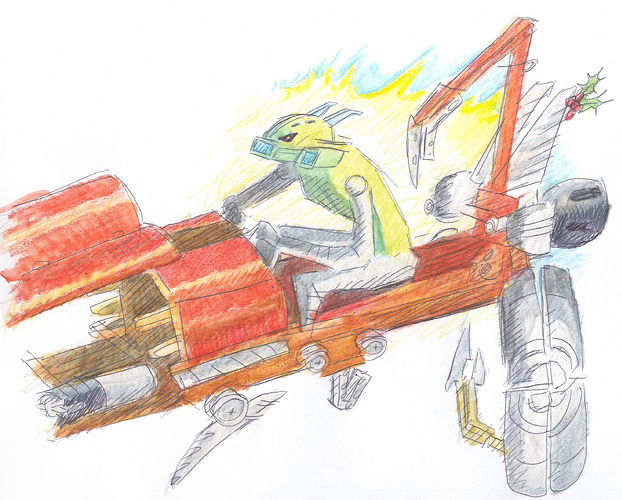 I dont have christmas memories because I dont do anything for christmas, I do for “three magic kings”, I remember when I woke up on january 6 of 2003, I had asked my parents to buy me tidalwave, instead I woke up and saw something called Bionicle, I thought to myself, “what is this?” then I opened, built it, and then I left transformers aside, and became a bonkle fan

My sister got me Kopaka Master for Christmas.

Also a few years prior I got vatus from my uncle.

I got my first Bionicle sets on Christmas. Turahk and Panrahk.

I got Master Lewa and his little jungle protector.

I’ve said this story before, but in 2006 my brothers were debating who would get Vezon and Fenrak. My oldest bro (Kylerak) decided he would get Brutaka, and my second oldest (Axxon) said he would get, well, Axonn. But they debated who would get the biggest set out of the wave. I didn’t really care who got either.

So it was a surprise when I got Vezon and Fenrak under the tree that year. It was my first BIONICLE Titan set, which I built myself, and was really proud of the set.

There are some memories about holidays with bionicle :
I got zesk as an easter present
The rahkshis
the protector of earth
Little +big mata nui for christmas

got a bunch of 2009 sets around 2011 or something. pretty good cause I always wanted that mata nui canister set as a kid.

Getting like all the Phantoka sans Lewa when they first came out was one of my best holidays.

I’ve told this plenty of times, but one year I got all 6 Toa Mata for Christmas. It was a wonderful gift that I was not expecting.
Now that I think about it, a lot of my Bionicle sets were obtained throughout the year, only a select few being holiday gifts as the years went on. Usually the system sets were the big presents come Christmas-time.

I got Tarduk and Cendox V1 for Christmas one year. I was hyped. They were my first sets.

I remember getting Rochoh T3 from a relative back in Christmas of 2010. Spent a couple hours or so building it.

Back in 24th of December 2009 I woke up and celebrated Christmas as usual as we do in our family every year.

From my parents I got a big christmas present which I understood was a LEGO set because of the obvious sound of LEGO pieces moving around inside the packaging.
I pulled of the christmas wrapping around the present and I found to my surprise a big LEGO box with a picture of the Jetrax T6, piloted by a red being(obviously Antroz) and the text “Bionicle” in one of the corners and I understood from that very moment that I had finally gotten my first Bionicle Titan/Vehicle set.
I became really happy and started to build almost instantly after that the rest of my family had opened their own christmas presents.

I can still to this today remember it somehow, even the feeling of happiness that I had that morning back in 2009.

I remember that when me an my brother were kids, our grandfather got my brother Pahrak. We were both very happy about that, because it was 2003, and if I remember correctly, Pahrak was the last Rahkshi we needed to have all 6 collected. That alone blew our 8 and 6 year old minds.

A year or two later, on christmas our grandfather got us both presents for christmas. The wrapped presents had the very obvious shape of Bionicle canisters. We could see that they had the slightly triangular shape that both the Rahkshi and Vahki canisters had, and we were expecting it to be Vahki’s, as they were quite new at the time. When we opened the presents later we found that both of the canisters were not Vahki canisters, but Rahkshi canisters. Which Rahkshi? There was one Pahrak, and one… another Pahrak! We both laughed and explained to our grandfather that he gave my brother this set a while ago, so now we have 3 of the same Rahkshi in our collection.

Just writing this put such a big smile on my face. Such a great man, miss him everyday.

I have two pretty distinct memories of getting Bionicle for christmas-

The first was when I received Cahdok and Gahdok. At the time, I though the sets were long gone from store shelves and it was a set I had almost forgotten about. Given how young I was at the time, that was a set that took quite a sizeable amount of time to build, and was really my project throughout the whole day.

My other memory was of Zaktan. A tradition in my family is to open 1 gift on christmas eve, as a way of “getting you through the night” (Nowadays it’s a good way to end a christmas eve party). But anyway, when I was young it was usually a new pair of pajamas, but in 2006 my mom threw in Zaktan. It was the first Piraka I had, and to this day 2006 is not only tied as my favorite year for Bionicle alongside 2001, but the Piraka are some of my favorite sets overall. Needless to say, having Zaktan that day was an absolute blast, he was such an awesome start to a new generation of Bionicle sets.

There’s certainly other “holidays” that I had fond memories of- for example, getting the large battle of metru nui playset in 2005 for my birthday. Another one is actually ore recently, back in 2014 I was sent the 2015 Bionicle sets early (as documented in my reviews on Eurobricks and cameos on video reviews of the wave on BZP’s youtube) which happened to fall around the end of October. I was putting the sets together, talking with my friend over skype on halloween and noticing that it was already snowing outside here in michigan. A great time of year and a great wave of sets.

Almost each Christmas I get a big Bionicle HF set.

I got a barakki one christmas. I told the mall santa I wanted one. He seemed super confused but apparently he knew what I meant.

Got wasted Christmas 2009 after watching The Legend Reborn. It didn’t help that I got Toa Mata Nui with the DVD. One of the sockets flew off and landed in my beer and I had to use a coffee straw afterwards!

I’ve gotten LEGO sets almost every year for the last…near decade? No particular memories stand out, but they were all good times.