Drais is a Powerfull Cyborg warrior,Nobody really knows who he is or where he comes from,but he seems like not a bad guy.
(it is not yet decided if he’s in the bionicle univese) 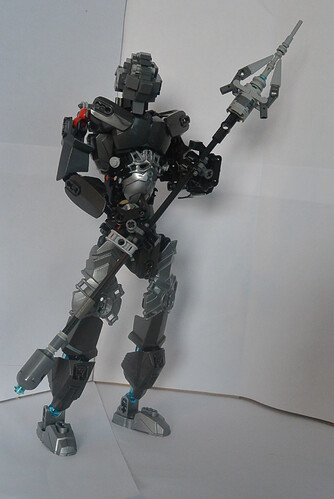 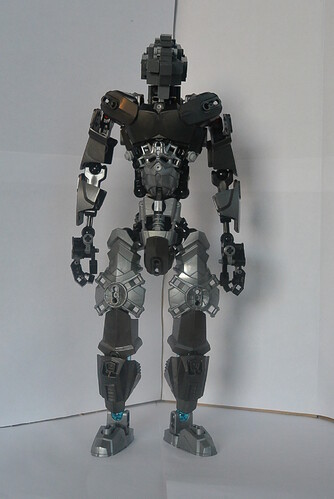 the black is his skin,the silver and gunmetal is light armor that allows him to stay agile while still be protectod. And the [lego] dark grey is more heavy armor for more protection,mainly around the head area 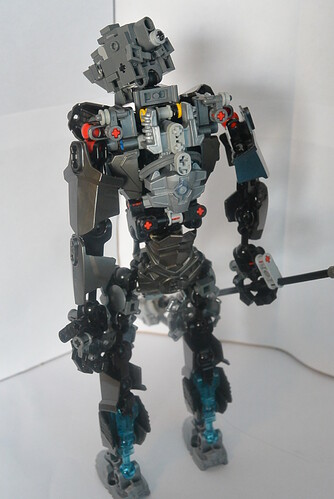 Heavily inspired by warframe (even thought i’ve never played it)

Something about this MOC seems eerily resemblant to Ultron from the new Avengers movie. Onto the MOC itself, I like the overall flow of the MOC in certain areas, the color scheme is distributed wonderfully, and his weapon is cool. The only problems I have with the MOC are those Brain Attack chest plates on the legs since they are a little wide and don’t really flow with the rest of the legs. I personally am not much of a fan of the red ball joints and pins, though that may just be personal preference.

@Stoax thank you!
the red balljoints and pins are because of my lack of black variants,so don’t mind them.
and now that you mention it,it does resemble Ultron a bit… not that much,but a little.

@Cordak_the_Last_Makuta thank you! i agree about the red,i’ll try to fix that eventually

@TERMINXX i would but the graphic card on my dad’s computer isn’t strong enough,and my computer is just waaay too laggy.
thanks BTW!

The flow of the armor on the front is very solid, and the black and silver flow quite well. The custom staff is also very neat, as well as the staff. Issues include the head, which just kind of looks blank, but hey, it’s a cyborg. The open pin holes on his thigh armor is also a bit distracting, but it’s nothing major. The real problems lie on the back. All the red is really off-putting and clashes a lot with the trans-blue. I advise either replacing the red with black, or removing the trans-blue, since there’s isn’t really enough of it as of now to justify its being there. Overall, it’s an 8/10

first, you need to play warframe, 2nd,i love the head, and also it looks really sleek in the front, and super complex in the back, so that is neat…

jeez
how many self mocs do you have?

May I ask
Whats the point of more then one self moc?

not to be rude or anything

anyways
I actually really like this moc, its pretty noice.

I will assume you mean you cannot make one moc that represents yourself?
Which sounds pretty stupid tbh

naah jk that’s not what i meant

do you have a ps4 because if you do, its on there…

@TERMINXX
No,i don’t have a ps4 ;n;
[i’m gonna assume you intended to post this on my warframe topic]

As for the MOC…I guess it’s okay. Your smaller MOCs still remain to be better though.