Alright! Here’s another MOC. I tried to go for more or less a feudal Japanese motif, and I think it turned out well. Before the pictures, I would like to say that the head design was inspired by this guy named The Crowe’s Nest on YouTube(idk if he’s on these message boards). Once again, the full bio from the TAPP page is at the bottom for all my fellow bookworms. 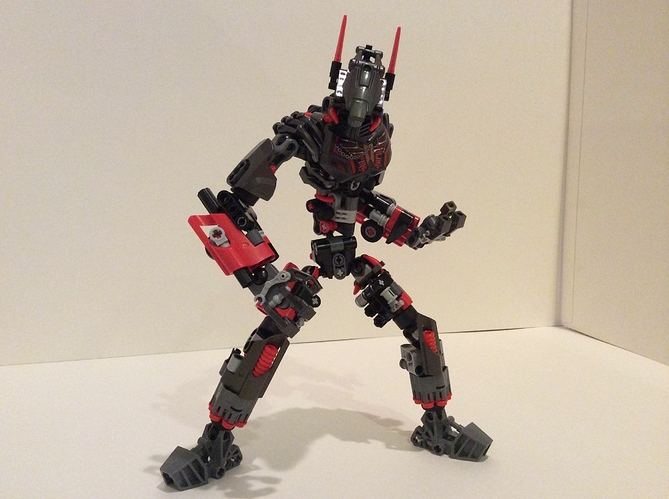 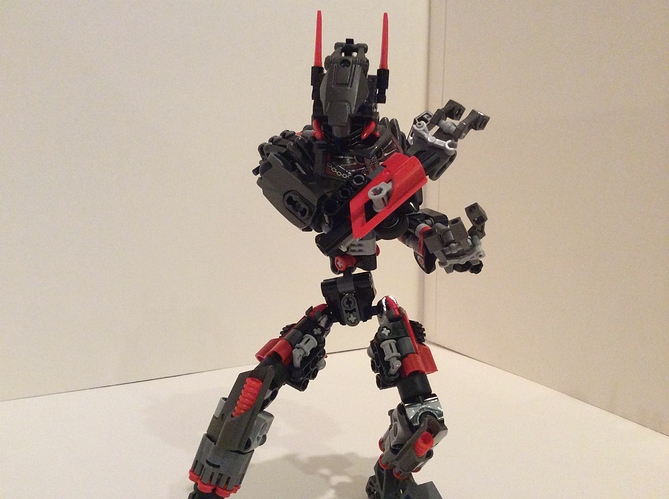 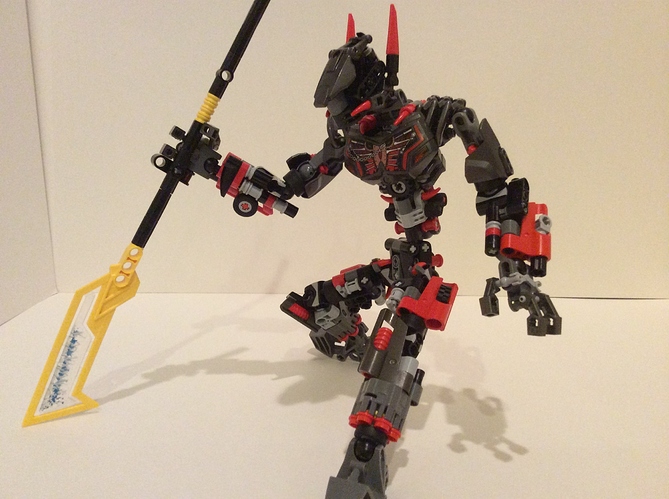 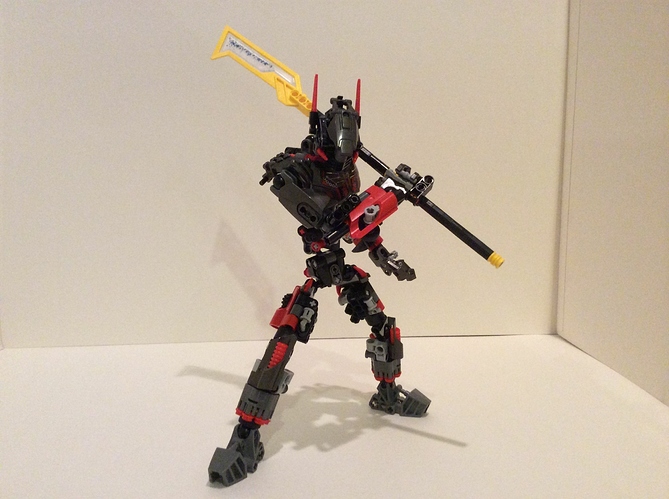 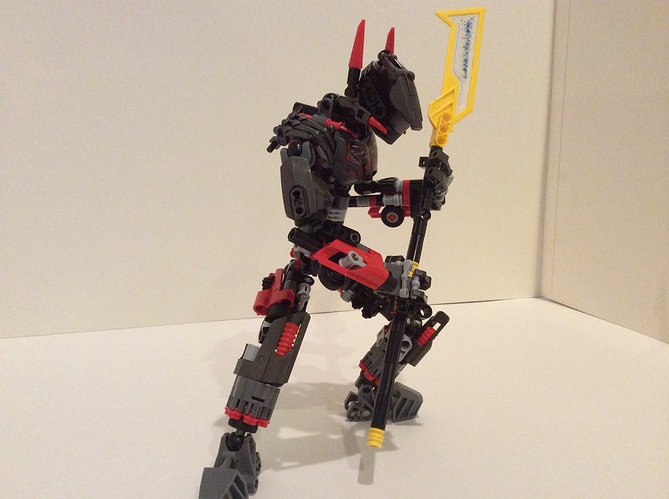 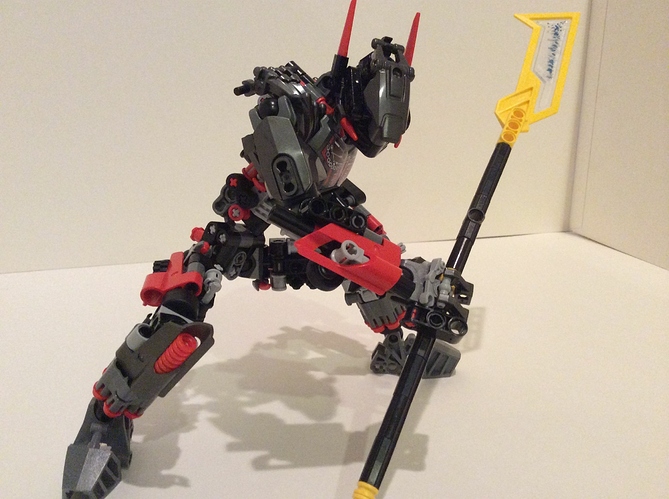 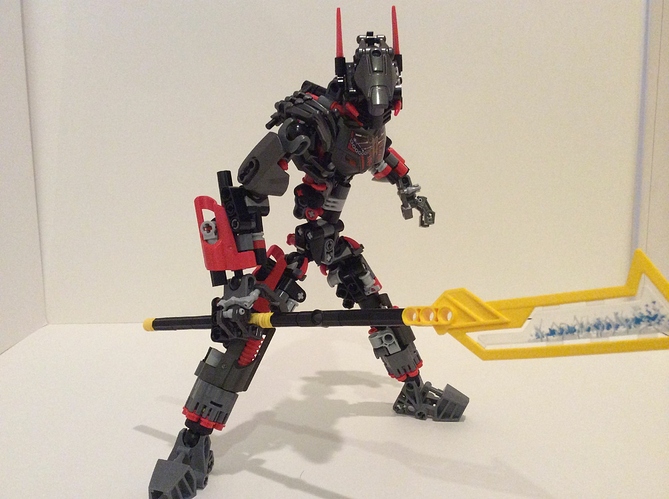 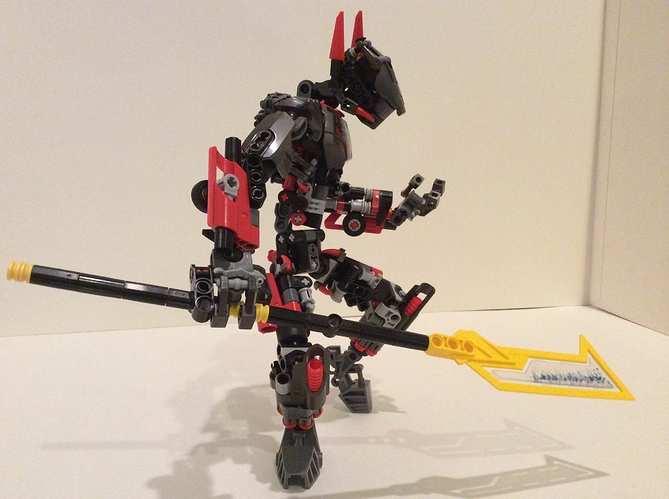 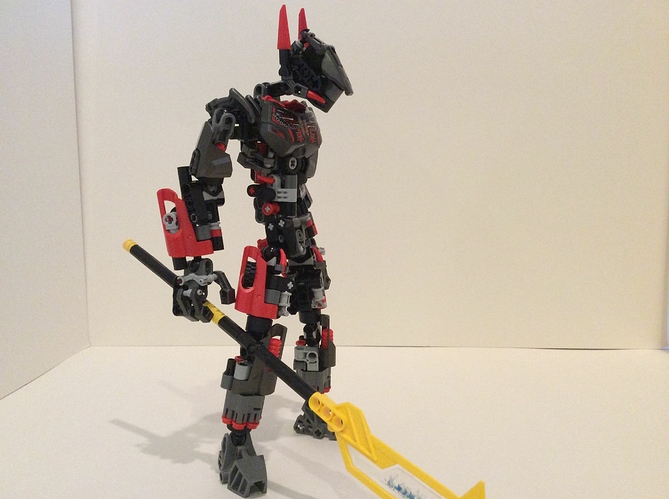 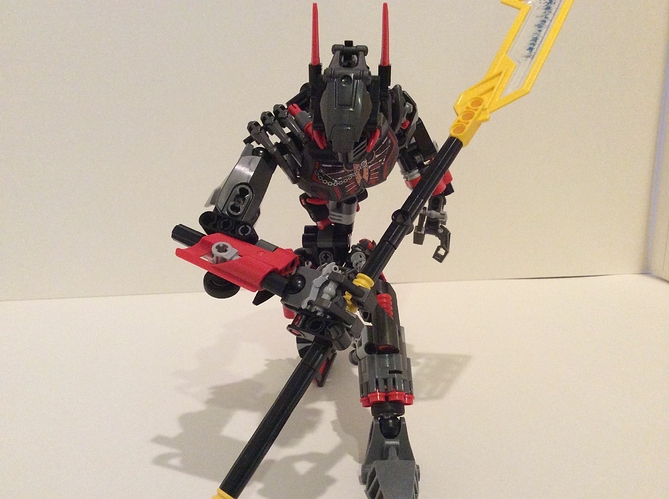 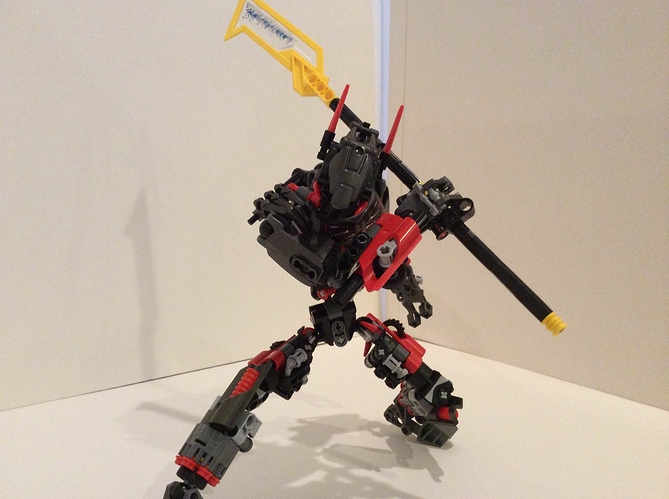 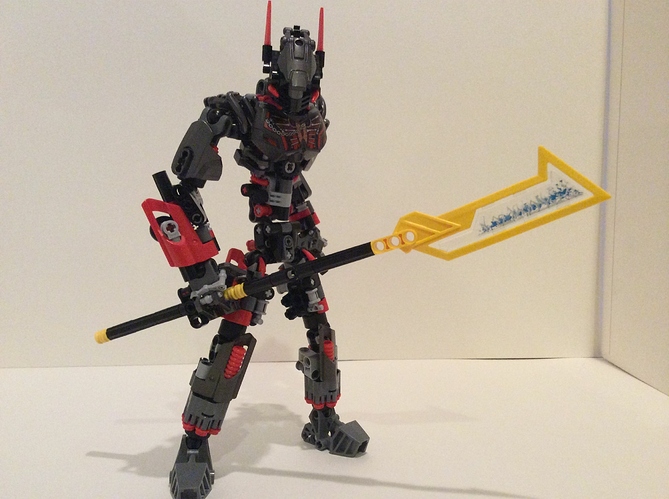 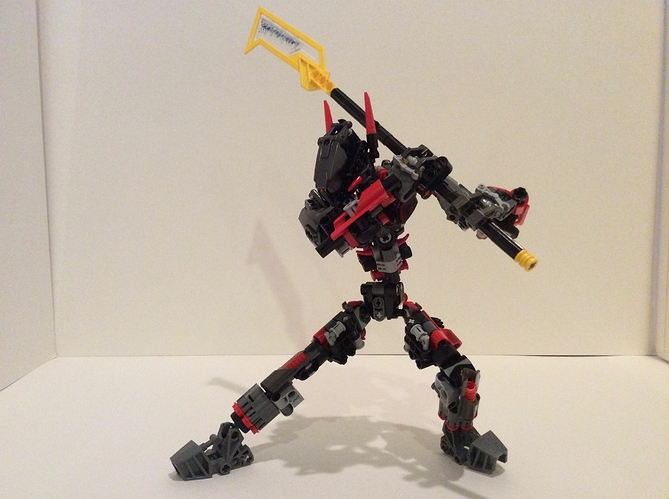 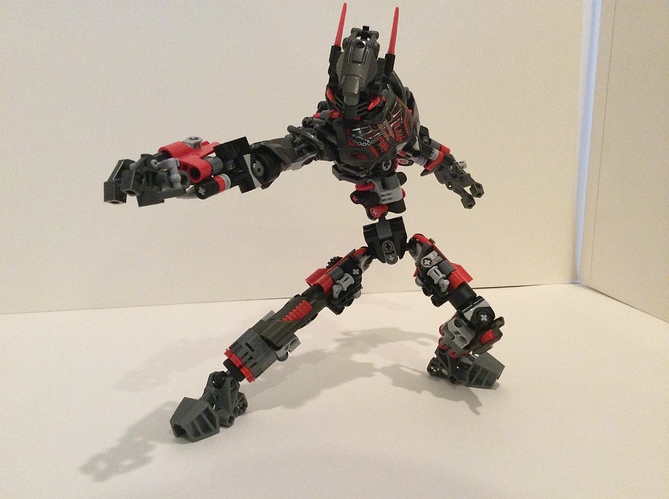 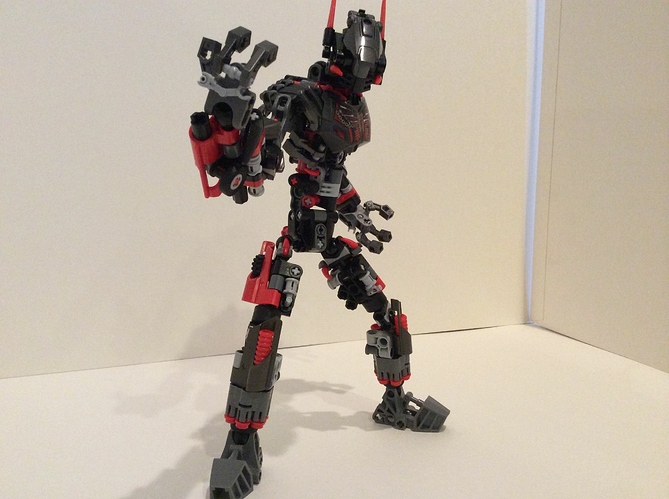 Kaito was one of the ancient disciples Of Yoshido, The Earthen Ronin. Part of completely being accepted into his Elemental Order was to give up your human body and accept robotic parts. This would sidestep natural human exhaustion and weakness, Yoshido and his other 4 disciples agreed. However, the 5th disciple, Kaito, disagreed strongly. He believed that his connection to the element of Thunder would be lost completely if he were to give up his humanity. He opposed for as long as he could, but the villagers of his Element as well as Yoshido and the 4 other disciples convinced him that transcending his humanity was the right choice.

He awoke visibly shaken and unstable. But the breaking point was when he looked down on his hands. Thermal vision enabled itself and two targeting crosshairs focused on them. It was at this moment that Kaito knew he had given up his life and had made a gravely wrong decision. He made a mad dash for the exit of the temple right away, but was stopped by Hyoko, the Disciple of Air. He was subdued, but released several flash-bang grenades from his wrist, blinding the disciples and making his escape. Kaito was erased from the Order’s history and lost to the world.

Very nicely done, although I need a back pic in order to make a full verdict.

Oops, sorry about that. I think it can be figured out generally with all of the pictures, but yeah. Sorry.

Seriously great moc. The mask is so cool, never seen anything like it. The body, arms and legs looks so great and so fluent. Looks as though there is much poseabilityand flexability.The yellow weapon (in my opinion) upsets the color scheme. If it was red I’d be super happy but you gotta work with whatcha got.

Yeah. That yellow Naginata sword is relatively confusing, and is the focal point of confusion on this MOC in many peoples’ opinions. By reading carefully, you can see that this guy actually has the element of thunder and not fire. I was thinking one day that if these guys are robots, maybe their colors don’t necessarily match their element. Maybe one day I’ll post up a yellow redesign just for kicks.

I am not a robot.

Ah. I take it you’ve seen the YouTube video? XD

Brilliant work! Nice use of Technic panels, and the use of rapid launchers in the legs is straight up genius!

Can those leg missiles fire?

E: I like how the weapon stands out from the rest of the MOC.

@Cyclopian Yes. The gimmick there is that he has ankle-mounted guns for ways out of sticky situations. However, see that small tire below the shooter? I put that around a 1/2 bushing in order to keep those studs from actually firing for display purposes. By removing the tire, the shooter can work normally.

The MOC itself is nice, but I don’t like the yellow on the weapon. I get that he is lightning elemented, but it is still an eyesore.

Just a reminder that Double Posting is against the rules. Edit your posts to make multiple replies, like I did for you on your post.

I like what you did with those stud launchers!

this seems familiar to me, but I can’t quite put my finger on it… 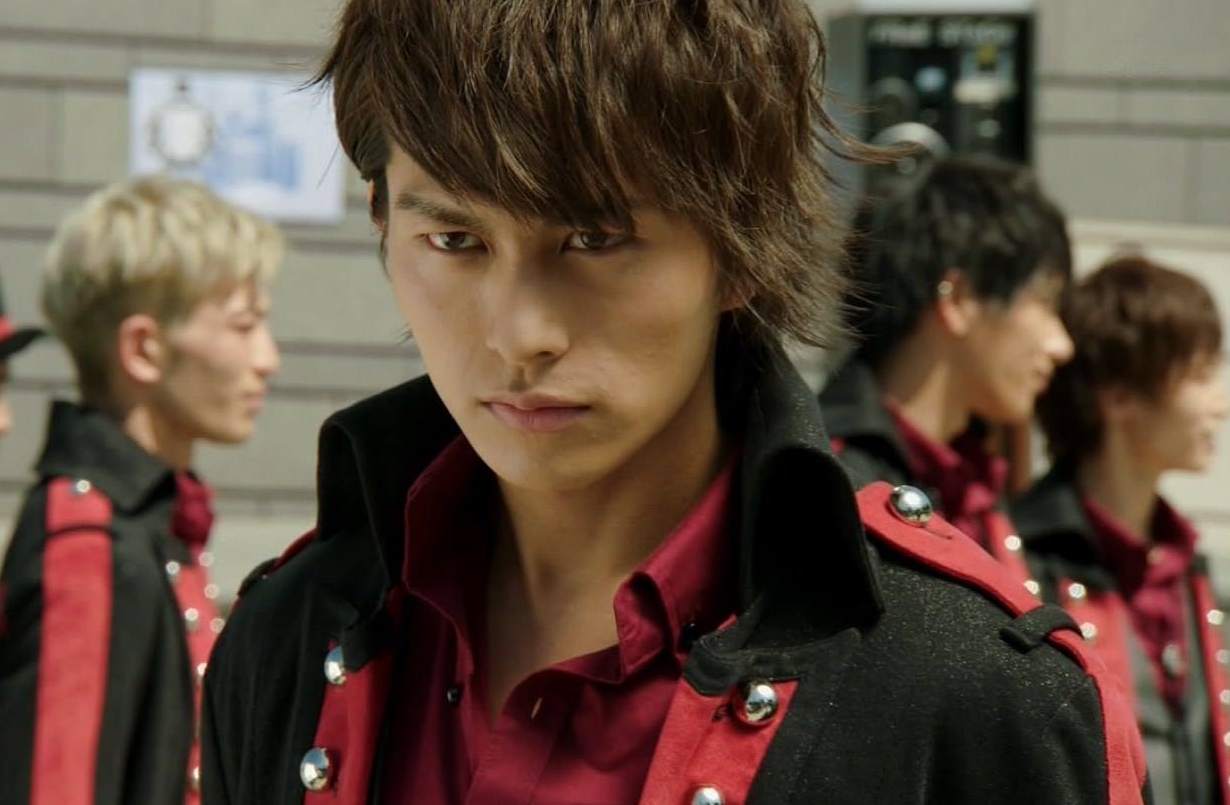 In all seriousness, This MOC is pretty cool. It has nice proportions, and I love what you did with the stud launchers. If I had to give criticism, it would be towards the year. The eyes seem a lot farther down than they should be.

Overall, I give this MOC a

I was reminded of this too much 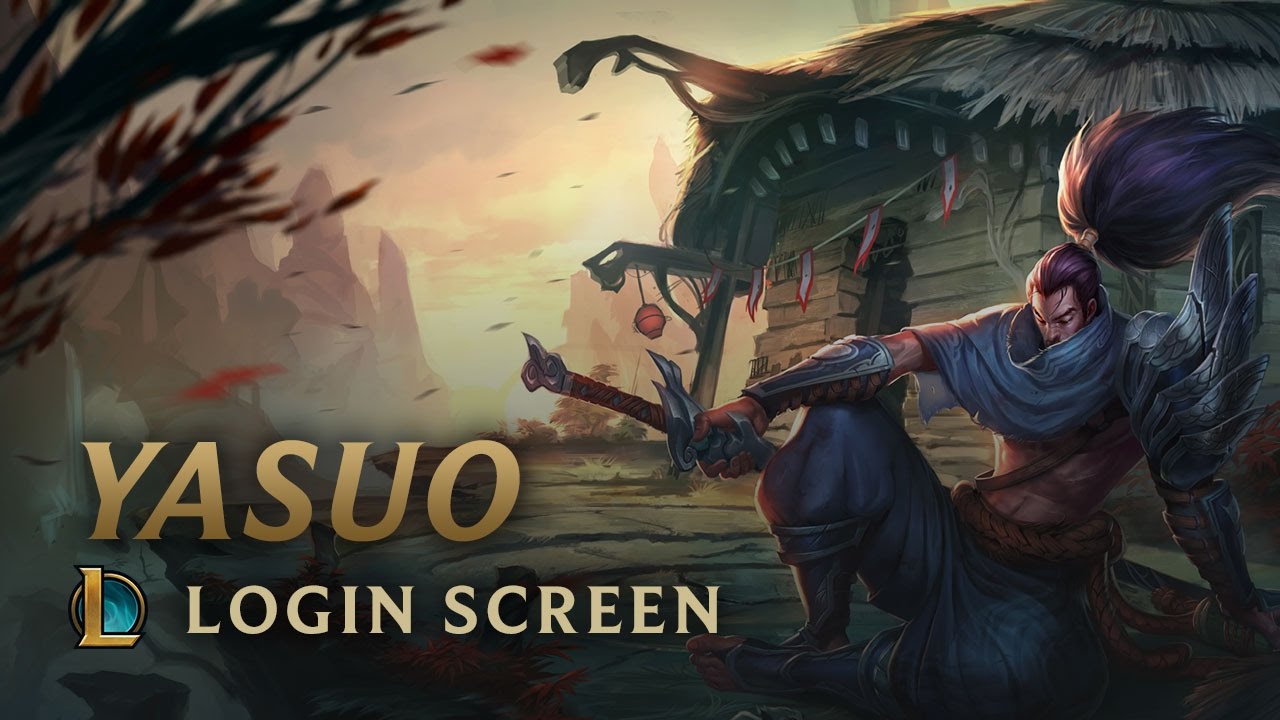 I can… kinda see the Feudal Japan influence… kinda. It’s too skinny, IMO. Also, red and black is kinda meh.

I really like this MOC, it gives off kind of a rockstar vibe.