Introduction:
You wake up near a scene on the scene stands a Po-Matoran, the first thing your notice is that your powers, abilities and weapons are gone except for your mask powers. The Po-Matoran is ready for a speech.

Objective: If you wish to leave you’ll need to commit the perfect crime. (Murder someone without getting caught)

Rules: (Are there so my job as GM will be easier and hopefully there will be fewer arguments too but for the most part, it’s just your normal freeform Rp)
Basics:
No metagaming or god modding
No more than two murders can be committed by the same character.
No breaking locked doors.
Teaming is allowed(a team is only allowed to kill 2 characters as well)
The universe they are in Is G1 so it’s rulings ably here
You’re not allowed to harm, try to harm or threaten the NPC in anyway this results in instant
death of your character, breaking a rule also instant death.
No Kanoka tech allowed due to it being too overpowered.

Game Mechanics
To kill another player. You’ll need their consent(Players character who’s about to get killed will have 24 hours to respond. Then to move the game forward the GM will roll a D20 and if the results equal to 15-20 that character dies, if the result is 5-10 they have a chance to survive and counter attack but the murderer is allowed to attempt to kill the character again. If the results are 10-15 works the same way as if you get 5-10 but the victim character will be severely wounded. If the GM rolled 1-5 the murder fails)
Trials: Trials are the main way to win by escaping justice everyone else will pay for your crimes. (Trials works as such if you were to guess the wrong character to be the murderer, the murderer wins if the murderer was guessed right the murderer dies. Not showing to a trial will mean instant death, A trial will be announced after three people have found the victims body then you’ll have 100 posts to solve the case. Everyone will be notified via @:s when the Trials starts and is announced.(To be present at the trial the only thing you have to do is inform that your character walked or entered the trial room.) (after a trial is completed the new area is unlocked.)
Clues: (you must leave at least one clue if there are no clues then the GM will give the players a clue.)
Restricted/new areas: Trying to enter a new area before getting permission to do so results in instant death. Entering the wrong code to open the door will kill you.

Logbooks:
The logbook will be Placed in the first message of the OCC pm and will contain information about all characters without their trustworthiness and deception numbers, the rules and other info will be posted there.

This Rp will be round based so one round will be active for three months unless someone wins within the time limit. You can’t sign-up while a game is going but once one is over I’ll notify anyone interested in joining that they can join I will notify players who want to give it another shot as well.

This will be my first time hosting an Rp so if you have feedback later on about things I can improve feel free to let me know.

I’ll probably make something in a bit

I’ll have to think about it.

Name: Mokuzai
Species: Toa
Element:(optional depending on species) Plantlife
Appearance: A toa wth brown woodlike armor
Mask power: Kiril
Weaknesses: The usual toa weaknesses. Also fire.
Bio: A nobody toa that enjoys sassing the people (?) around him. He generally does whatever he finds funny.
Personality: Quiet at most times but whenever you give him an opportunity to sass something. He’s right there.
Trustworthiness: 3
Deception: 5 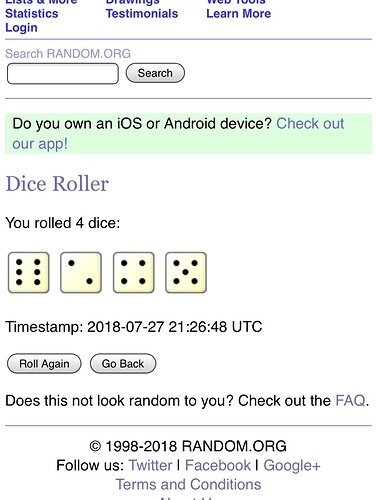