Absolutely stunning! This is what brick built Bionicle should be, faithful to the technic roots and feasible in current Lego. I will say that some of the toa look a little awkwardly proportioned, but I see this as a limitation of scale and available parts

The only real issue I see is the thickness of the masks, if they were produced they would be so thin and unreasonably so, that I’d expect them breaking would be decently common. They might be as thick as a minifig visor, however unlike the minifig visor they are complex in figure and have structural faults. Those are my main worries about how feasible the design would be. (IK the project is a digital platform and not really meant t become sets, however looking at it from that perspective does raise a few questions)

These are stunning, and I’d love to see these custom parts go up on Shapeways for 3D printing!

They might be as thick as a minifig visor, however unlike the minifig visor they are complex in figure and have structural faults.

That is, if this possible structural issue can be resolved. Shapeways might be a good way to troubleshoot this.

I’m gunna commission a 3D modeler to do all 12 masks in a more stable thickness and slightly less detailed but still keeping like, the vibe and stuff. The tohunga arms are due for a redesign too.

To summon the Toa, the Matoran of Mata Nui must collect the 6 golden masks and return them to the Suvas before Makuta’s power becomes too much. Help Kotu and Macku discover the ancient mask so Gali will finally come to their aid. But the Tarakava lurks below, so watch out! 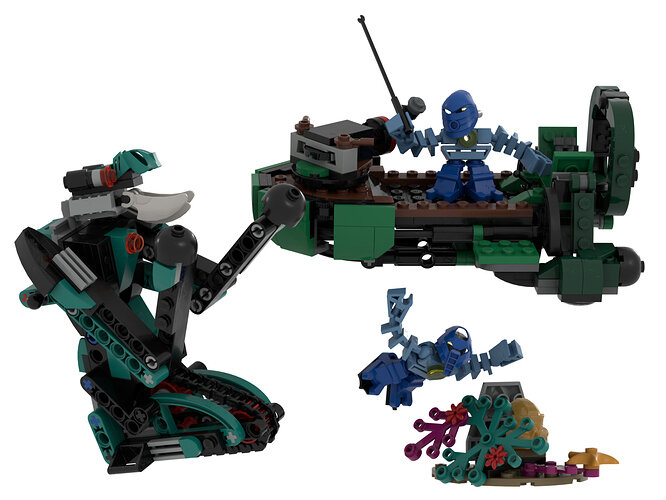 After searching for 1000 to find the Golden Masks, they finally retrieve all 6. After the Toa Suvas consume all 6 masks across the island, beacons blast into the sky, the Toa canisters being guided to the island. The Golden masks can not be released until the Suvas acquire all 12 of the great masks now released across the wahi, so that is the Toa’s quest. Once the Golden masks are finally recovered, the Toa are ready to face the evil Makuta and save the land.

After countless years of surveillance, Kopeke finds Kopaka’s golden mask guarded by the terrifying Muaka! With Ehrye joining him, it’s time for an expedition! They must cross the drifts and battle the beast to summon the Toa of Ice! 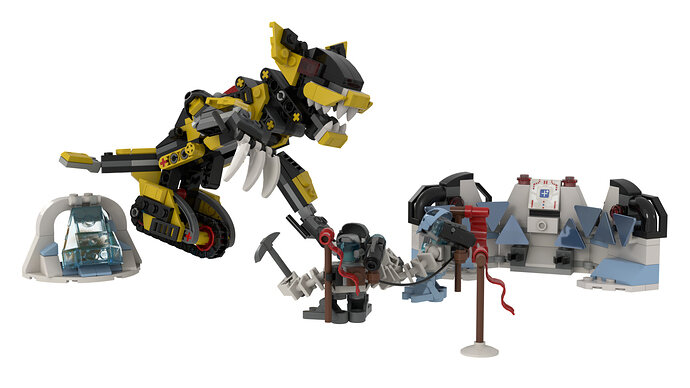 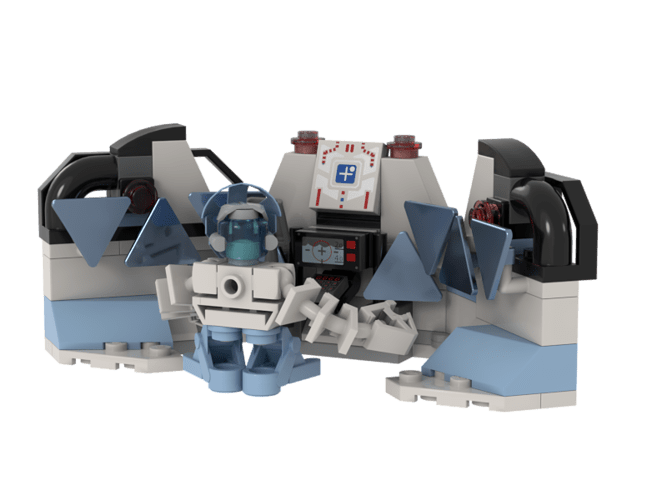 This honestly just looks more bizarre to me now than anything else. Like how the Matoran look near-identical to their original iterations while the Toa and Rahi are shambling simulacrums of their former selves.

Maybe that’s just me though.

I am trying to keep the original’s style while also putting forth my own. Some of my Toa need work, but at their core they’re very much based around the original Mata. There’s only so much I can do, fitting in full functions with system based creations. And keep in mind that nothing is final, all of these designs are subject to change, and everything is very much a work-in-progress.
Although “shambling simulacrums of their former selves” is a bit much, don’t you think? I may have simplified some things but what is important to me is keeping the spirit behind the sets. I put a lot of thought into these designs.
But in any case, this BIONICLE isn’t to cater to previous fans. It is to bring in new ones.

isn’t to cater to previous fans

And trying to near-exactly replicate the originals, at detriment to their own design, seems to defeat the point there. This isn’t a system reimagining of Bionicle: this is Bionicle, but system. It just looks strange. And for that matter, why even bother?

Although “shambling simulacrums of their former selves” is a bit much, don’t you think?

That was largely in reference to the Rahi, though I’d definitely say the Toa need some work too.

Again, only speaking for myself here, but I wouldn’t buy these. Maybe pick up just a Matoran or two for the novelty, but no more than that.

Again, only speaking for myself here, but I wouldn’t buy these. Maybe pick up just a Matoran or two for the novelty, but no more than that.

Okay, but maybe try giving some constructive criticism on the sets themselves.

What exactly don’t you like about the Rahi? Do you think they perhaps aren’t stable? Maybe they don’t incorporate certain play features. Or maybe just the flow or the colors are off.

Saying “These aren’t my exact vision, therefore I don’t like them” is neither healthy nor helpful. And I realize that might be a bit of an oversimplification of your argument, but more specificity on your part would be helpful.

That “shambling simulacrums of their former selves” comment in particular sounds very gate-keeper-y.

This isn’t a system reimagining of Bionicle: this is Bionicle, but system.

Okay, I don’t think this is really what you meant, but the way your worded this is basically the same thing.

It just looks strange. And for that matter, why even bother?

Because it’s fun? Because he enjoys it? Because they’re neat to look at? Because you could probably print them out yourself and make some cool sets?

And again, I want to reiterate, if your entire criticism of these sets is “I don’t like how they look,” please try and be more specific and courteous.

In the case of the Tarakava, the lower jaw is too long. They already looked pretty fugly in the face area in the original set, but at least the mask and the claws were roughly the same size. Here, it doesn’t really look coherent as a head.

I don’t really know how else to offer improvements other than just “use a different piece” or “make the masks bigger” or just “build it differently”, I’m not much of a builder. I just see what I see, and I think they would benefit from deviating from the base design so that they don’t look as blocky, stilted and lifeless as they do now.

That “shambling simulacrums of their former selves” comment in particular sounds very gate-keeper-y.

Yes, that was a bit much,

All I was really trying to say was if you’re just going to try and remake the figures in their entirety, flaws and all, just in system where the parts are less specialized for the purpose and make them quite chunky and visually inconsistent (to me anyway), why not just enjoy the original sets themselves? I understand that obviously there are things that can be done with these figures, just that the figures would probably be better off if they tried to be their own thing rather than a shadow of the past.

I apologize if I came off as unnecessarily aggressive or insensitive, I just get a bit caught up in the process of stating my case that I don’t really think about how that might make the other person feel.

First of all, i really love the designs you made, they have a certain elegance that is oftenly not caught by most figures in lego (at least i think so). I belive the matoran and rahi sets are pretty good, specially the matoran. I agree with others in the post in the point of the toa hips being to wide, the only solution i see is to change the hip piece for one that is three pin holes long that includes the ball pieces.

Again, it is an amazing work, i would really like to have this 3d printed.