so this is just to talk about a game based on the G2 series of Bionicle and how any of you guys would like to see it.

eh, not much exept to allow us to explore Okoto and to do sub missions on the island given to us by different Okotoians on the island (i would love to see this character make an appearance too :3 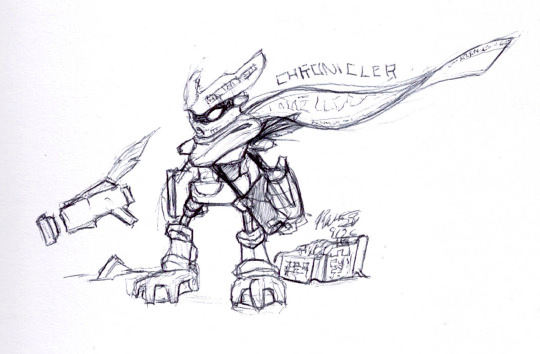 also i would like the game to have better bosses, the fights against LoSS, the Skull Warriors, Skull Slicer, the Skull Scorpios, Skull Basher and against Skull Grinder (im not calling him Kulta until we have confermation that that is his canon name) are not really made of legends.

Also, because Skull Grinders Combiner Form is apparently canon, i would like for that form to be the final boss of the first “chapter” of the game. I can infact imagine how that battle could go, First Skull Grinder uses the mask and have tons of junk in the forge float to him and then the “magma” in the forge starts to surround Grinder and then combine the junk with his body turning him into ultimate Grinder and his boss fight would be that the players would need to do what the animation did, by keeping Grinder away from Ekimu until the hammer is ready, and Ultimate Grinder would not be easy to beat, as his body would take 1 in damage from the Toas attack, while he can cause 999 in damage to the Toa, oh and he would have infinite health (or just 999 in health so that he would be difficoult to beat).

so that are my ideas, if any of you guys have some ideas on what you think a game based on the Bionicle G2 series would(/should) be like then please give a reply.

we already have a discussion about a ‘G2 Okoto Online Game’… but by your description it sounds different, so I guess there’s no need to flag