Hello! I am Nyran. This is the third of a series of 10(for now) topics that I’m gonna make for the sake of discussing a various year of Bionicle as a whole.

We’ve had big overall topics, like whatever, but few if any topics focused on specific years, outside 2015.

So, I wanna know some aspects that you liked/didn’t like/stood out to you about certain years! This topic’s gonna be 2008 because it’s a year I personally find special, as it got me into the BIONICLE Community. I’d been in Bionicle for years, but I was never on BZP, I was introduced to it through stop-motion series’ and etc.

And as such, I ask you! What did you think of the sets and story from 2008? The Final Battle for Power! The Toa Nuva would finally reach their destiny, facing their strongest foes yet! The Makuta themselves.

However, in my opinion, the sets were lackluster. Mostly the Mistakea. Kopaka and Lewa were and IMO still are the best of the 6 Nuva we got that year. Lewa’s colors may have changed, and his lime plastic may have been brittle, but keeping his lime made him feel like Lewa still, and I could buy into the idea that this was armor Lewa had. Same can be said with Kopaka there, with the exception of his weapon.

Onua and Gali tie for the worst Toa that year, with both simply not matching their characters at all, IMO.

The Makuta were all good, with Chirox and Bitil being the weakest. I loved all the other Canister Makuta.

All the titans and vehicles were fantastic, with the weakest being Vultraz’s, and his was still great.

But enough on my thoughts! Let the floodgates open so I may hear your thoughts!

Yeah, 2008 was a really exciting year both story-wise and community-wise, but not so much for the sets. Don’t get me wrong, the titans and the vehicles were pretty awesome, but there maybe should have been some redesigning on all of the mistakea. (I found that funny =D) I only got two phantoka and their matoran counterparts (Kopaka, Solek, Vamprah and Gavla) and I only just recently got Lewa and Antroz. They were good for parts, but otherwise meh. Also, in 2008 I discovered the YouTube Legends (not really) Scotttjt, Kylernuva, spinaxstudios and so much more! I was even inspired to make my own (failed) stop-motion series.

Scotttjt was indeed the Man. I loved Hydros Chronicles, and SoG, and SoC. A shame the latter two are on an indefinite hiatus.

Yeah, I considered the stories canon for a long time.

If this were the Transformers Wiki, you’d be torn to shreds by now. 8D

Canon and Cannon are so very different, but it’s a common error, so it’s fine.

" IF YOU TELL US ABOUT HOW SOME STORY IS “NOT CANNON” ONE MORE TIME, WE WILL MURDER YOU.
With a CANNON."

But uh, back on topic…I never got gorast, and I wish I had.

I feel like her wings would make awesome swords.

I’m sorry, I was in ye olde iphone, Siri made me. I do know the difference… just wanna clear that up.

And yeah Gorast’s wings do make for some awesome weaponry.

There’s not much really to say about 2008 for me. The only memorable moments I can think of is my discovery of BS01 and BZP and how I began to collect BIONICLE sets on a wider scale.

I loved the story this year. It was fantastic. We all know it, so why should I recount it.

The sets were great IMO. However I only got three (four if you count the Klakk from Brickmaster). Makuta Vamprah, Makuta Bitil, and Toa Onua Nuva. Saddening, but it’s a bit late to get more now.

I loved 2008 so much. While I wasn’t a huge fan of some of the Mistika, I loved all the Phatoka (even though I only get Lewa and Pohatu). The Av-Matoran looked great IMO even though they were simplistic and their combiner gimmick worked quite well. All the Titans looked excellent (Toa Ignika FTW!) and the Battle-Vehicles were flat-out amazing (the Axalera remains the one Bionicle set I want to track down the most).

However, my favorite thing about 08 would probably be the atmosphere for the first half. This includes everything from the concept of flight to the Phatoka logo to the honeycombs and stalactites on the box/canister-art to Gravity Hurts).

Overall, 2008 is my favorite year in Bionicle’s history. Someday I’d love to revamp all the main Toa sets the way I picture them (including their '03 Nuva-style tools). A good example of what I want to achieve would be this or this.

So yeah. I’ll get back to this thread in a bit, when I have more time.

2008 I think was a fantastic year for story, and for most sets. Let me start with story:

Bionicle finally got back to it’s roots, the Toa Nuva, and was really the final battle, as far as the Toa go. Finally getting some more Makuta mixed into the story was wonderful as well. And tying together the av-matoran and the great cataclysm and all.

As far as sets go, I really liked the way they set up the new matoran, some may say it’s a very basic build, but for matoran, it have them the ability to look like full sized sets from 2001, while also having more range of Motion than any matoran before. The Makuta were all a home run as far as I’m concerned, the only one I had a oriem with was Gorast, a bit too short and unbalanced for my liking. And while I’m at it, Icarax had one really, really weird arm. I liked all of the Toa, but onua looked a bit off to me, I wasn’t exactly happy with how thy designed him or his weapon. As far as titans go, I think every single Titan created that year was fantastic, from Takanuva to Toa Ignika, and all of those wonderful vertices, bringing back slow of the functions we missed from the old days.

Being that I own every set released that year (yes, even both colors of the Jetrax T6, don’t judge) I feel like I can review this year pretty well. If it were a movie, 4.5 stars out of 5, with the only weak points being very nitpicky.

Anyway. 2008. The first year I actually asked for BIONICLE sets.

This year had the Phantoka and Mistika lines. The first one I got a lot of sets from, and I thought it was a pretty awesome year – cool looking heroes (in their third form, but I didn’t know that then), dark and spooky villains, a dangerous world and a sense of intensity and climax in the story (although I might not have known that at the time.) Contrast the Mistika, which looked (and still look) bland, unexciting, and a letdown given they would have been the “final wave” of the final battle.

The Av-Matoran are near-universally disliked because they simplified the Matoran build to go the Inikabuild route of large and chunky parts. The design choices are weird, and the parts not easy to use. Nevertheless I got 2 of them (as surprise gifts).

The Nuva Phantoka I got all of, and they were my first ever experience with Inika builds (if you could believe it.) The main thing that struck me with them was their large amounts of dark grey, which hadn’t been a unifying color since 2005. They could have passed as part of the darker, deeper edge of the “final battle” except that they were always paired with bright colors. The weapons were cool, I loved Lewa’s giant sword, and the Midak Skyblasters were some of the best launchers for active play (have I mentioned the time I had an hour long Midak Skyblaster fight with a seven year old girl?) The masks bore decent similarity to the originals (and the Great Miru Phantoka remains one of my favorite masks of all time.)

The Makuta Phantoka I did not get at the time (although I did get Icarax off of eBay a year ago.) Compared to some of the past villains, they were certainly a lot darker and evil-looking, with large amounts of black (which unified them better than the Dark Grey of the Nuva), some nice bat wing pieces, unique villain masks, and… the Tridax Pod, which I still don’t understand the existence of.

Contrast the Mistika, which ties with Stars for one of the least liked waves in BIONICLE’s existence. The Nuva Mistika bore little if any connection to the originals, with far different looking masks and the unifying color being the silver, a fact we all hate so much. The Insectoid Makuta were weird, and the designs I didn’t care for. I think Krika was the only one of those that could be on par with the Phantoka Makuta. Maybe if they took Phantoka designs and put slight insectile changes to them, that would have worked better.

Anyway. A year with its ups and downs, and one that actually has nostalgic value for me. Phantoka line was excellent in my opinion, but if I’m judging both Phantoka and Mistika the year was meh.

The only thing I have to complain about 08 is the bad parts quality. I loved the story, This was the point I was finally all caught up and could follow the story as it came out. We also cut the vehicles, I am proud to own two of which. Those were just the most awesome sets ever.

I had quite a few 08 sets… every last one of them broke (along with 2009 (save for Mata Nui) and half of 2010 (Skrall, Gresh, and Yerahk (my name for the Yellow Rahkshi) Stars are still holding together).

Also, 2008 is the year I got my first Bionicle set (I got the Mantax and Kongu McDonald’s toys near the end of 07). 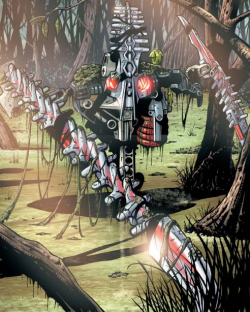 I hated the fact the parts would crumble, especially in these because I felt there was so much potential. 2008 had some awesome things that make it one of my favorite years, the music was great, everytime I think of the Phantoka the song Gravity Hurts pops into my head.

I loved the Makuta, although the Mistika sort of lacked in creativity at least they were very distinct. Krika was the most characteristic among the Mistika. The Matoran were my favorite, they were nice, simple, and I just liked the design overall, this was the first time we had full on Shadow Matoran.

The Toa’s I loved, they weren’t Nostalgic but they were awesome. I do wish they strayed away from weapons and had more or less tool themed weapons like Gali’s hooks. The Mistika Toa had a lot of silver but I understood why. THEY WERE TOA NUVA, SILVER, NUVA! IT MAKE SENSE. Anyways, I still feel Gali should’ve been less… full on gear that James Bond would’ve said no too. But Lewa was beautiful. Takanuva and Toa Ignika were amazing too.

The Jets… come on… THEY WERE EPIC. The only one I have is Axalara T9 and I love it. Anyways, the story was awesome. The characters, say what you want but I love the build and seeing my original Toa’s brought back again. The Matoran, I just loved.

This strangely enough was my favorite year… well it would be if MOST OF THESE WOULDN’T BREAK. But nonetheless I was happy.

Get your head in the game

I was close at least.