Hello, fellow Lego fans! Here is another MOC which I have built.
This is Bireos, the Conduit Hunter (but you already knew that because you read the title.) 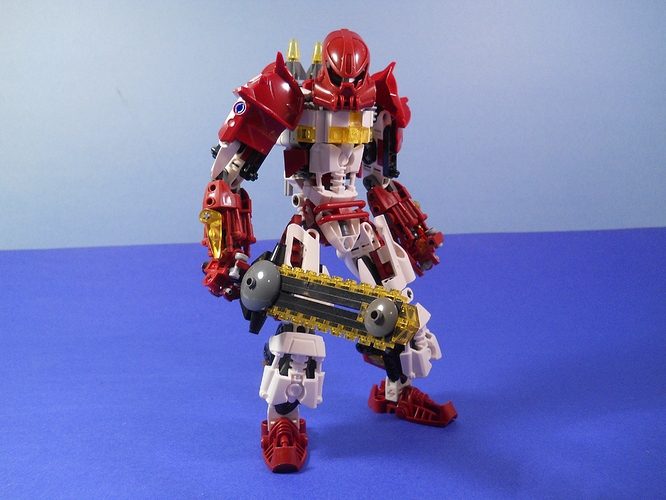 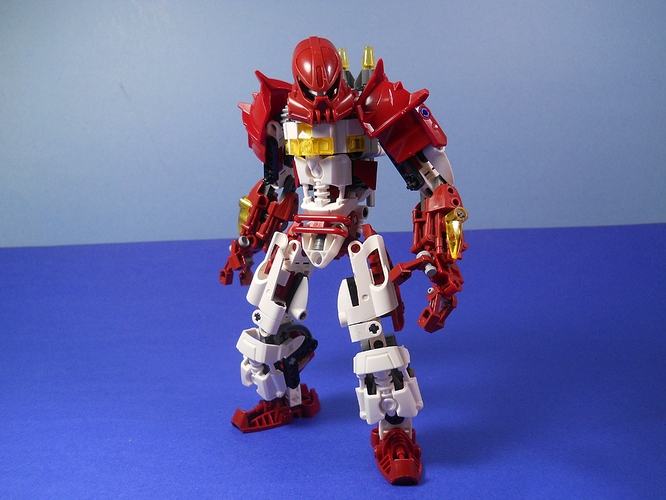 DSCN0285.JPG4000×3000 2.54 MB
As his name indicates, Bireos is a hunter, and he uses his crossbow and Kanohi Huna to attack targets unseen from distance. 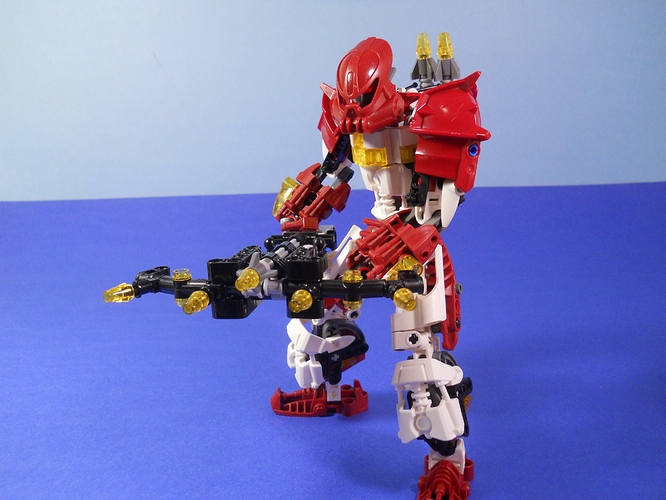 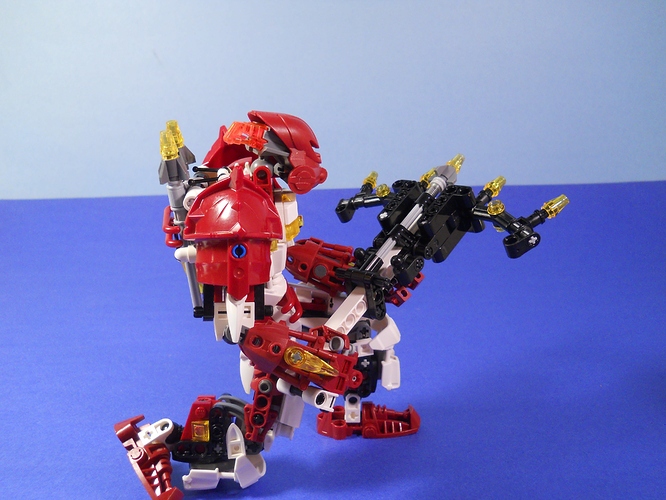 DSCN0302.JPG4000×3000 2.52 MB
And when shooting energized bolts doesn’t do the trick, Bireos can fold his crossbow into a spiked club (thing?) or use his trusty broadsword. 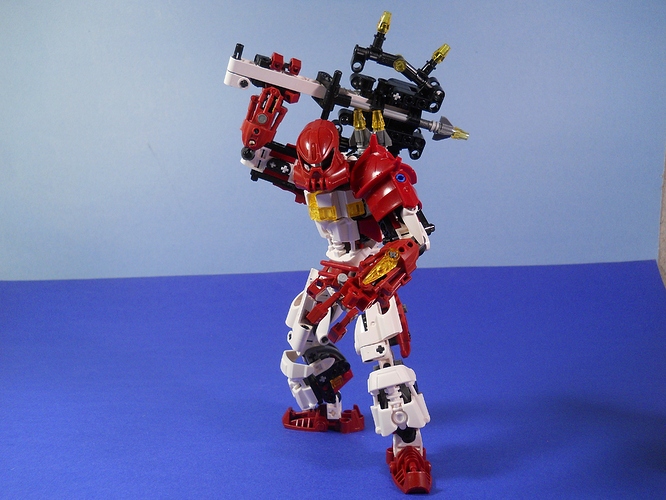 DSCN0297.JPG4000×3000 2.54 MB
The main feature if this MOC is the crossbow. Using a custom spring trigger mechanism, the crossbow can actually launch bolts a decent distance. A video demonstration can be found here: https://flic.kr/p/yYk6WT
The whole crossbow wielding hunter concept of the MOC was developed after I designed the crossbow. I added elements such as extra bolts on his back to go along with the theme. I picked the color scheme since I wanted the character to use the Huna for camouflaging, and I thought the yellow contrasted nicely with the white and red.
As far as backstory goes, Bireos is a mercenary who was hired by the ancestors of the mask makers to hunt down the leaders of a race of multi-elemental warrior known as Conduits. Although almost all Conduits fled Okoto, Bireos still roams the wilderness in search of Ahi, the one charge who escaped his grasp. 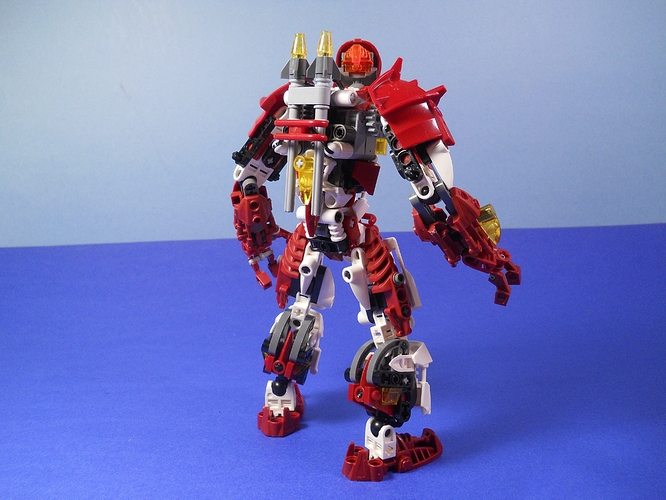 DSCN0287.JPG4000×3000 2.49 MB
As always, comments, questions, and constructive advice is welcome.
For a more in-depth look at Bireos’s backstory and abilities, additional photos, and detailed shots of the crossbow’s construction, check out the full album here: https://flic.kr/s/aHsknq3ckW
Thanks, and happy hunting!
30 Likes
MakutaKirakh October 28, 2015, 5:58am #2

In my opinion the greay parts in the lower legs should be replaced with black ones if you have them… but it is only a very minor thing. ^^

I love the trans-yellow sprinkled in throughout–it adds a really cool feel to the MOC, and stands out nicely. The red and white flow well together as well, and I love the simple ingenuity of the crossbow’s function, and the fact that it can serve as a melee weapon. The sword is also killer (it almost looks crystalline).

Love how he is supposed to pair with Ahi–they look like suitable enemies. All in all, awesome work!

quite the great moc!

I approve this MOC! This is nice! But the weapon looks a little out of place so 8/10 A nice MOC

I love the crossbow.

Great build! I find myself drawn to that sword…

Great build, colors, and crossbows are as well my weapon of choice! Nice job!

The design is great, the colours flow really well, and the weapons are really cool!

Yeah I can’t find anything really wrong with this MOC!

Love the build, but the bottom could use more red.

Woah, this is really cool! I love the color scheme, and the weapons are great too.

This is really cool looking, I like it, but for some reason I’m not a fan of the chest…

I got to admit this looks great.
The weapons especially look amazing.

The weapons add so much to this guy. I’m kind of getting a Nexo knight vibe from the weapons, especially the cross bow 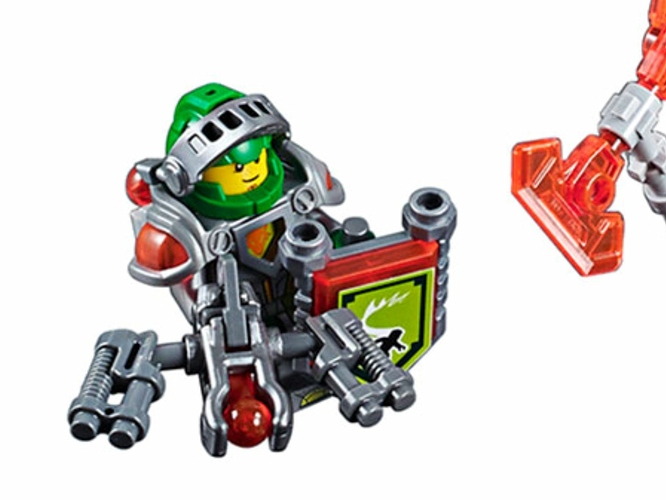