So, as Makuta Racnar was a succes (i think of him as that atleast) i decided to incorporate him into these guys story:
Bomjun (also my selfmoc) 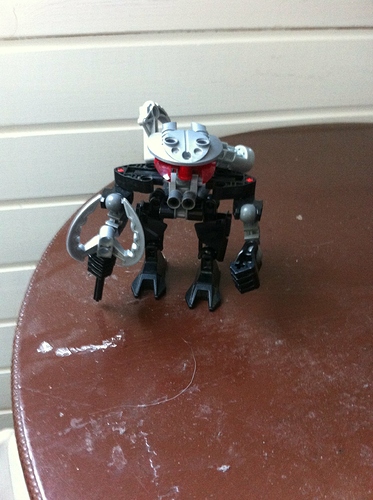 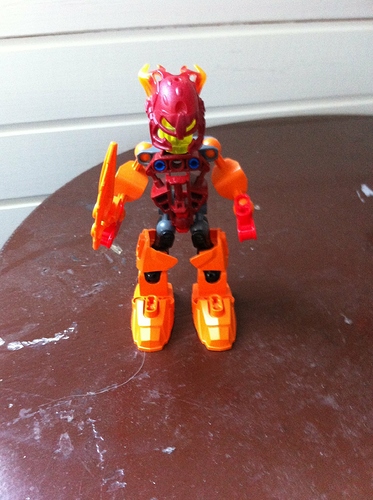 So, the story takes place in a parallel universe where Racnar was never killed but he instead killed Mutran and Antroz. Now you may be like “Well if mutran died then how did Teridax get the ideas for the great plan bla, bla, bla.” Simpel, Teridax never thought the plan possible after Mutrans death which then led to the world continuing but without the Makuta as an enemy

“Have you heard?”
“Heard what? and why are you waking me? its like 4 in the morning”
“Bomjun! GET UP! Racnar wants to see us”
“Us? why would he want to see us? we are just two matoran he saved from one of his own rahi back in the day…”
“He says its urgent”
“Alright… but only because its Makuta Racnar”
Bomjun slowly walked out of the bed and took his backpack 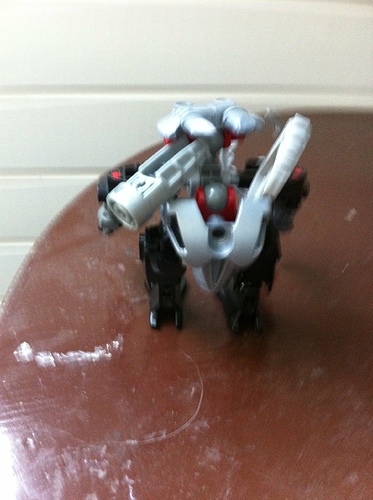 IMG_0088.JPG1936×2592 1.68 MB
Then they started to walk up to the fortress that Racnar had built upon forcefully becoming the Makuta of Voya Nui.
“Ever thought of why Mutran suddenly disappeared Hujt?”
“Nah i try not to think too much of it. I like Racnar, he stopped us from creating a city on a piece of land that around 3 years later sank into the ocean”
“Yeah, i guess… he’s better than Mutran i suppose, but cant help but wonder what happened of him. People say Antroz disappeared aswell.”

A little while later they arrived and they were meeted by someone they did not expect to find.
“Hello matoran, im gonna have to need you to come inside quick” said Chirox.
When they entered the fortress both of their jaws dropped to the ground, they had seen the fortress but never been inside it. There were a large table filled with pieces and energy substances, possibly for Rahi creation Bomjun guessed while Hujt was more interested in the large dining table.
Then Racnar came into the room, he showed signs of battle but the source they could not identify, he also seemed to be limping which surprised the two matoran. They had never seen a Makuta show signs of being hurt before.
“Are you okay!?” Hujt asked seemingly forgetting he was talking to a being made by the great spirit himself.
“Im fine, and thats not what matters. What matters is that i have something for you two.” as he finished the sentence a large door opened and two Rahi neither had seen before stepped out. 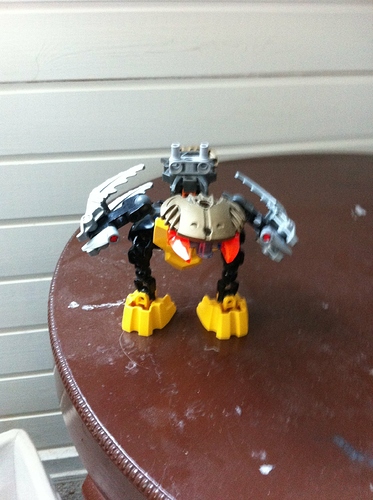 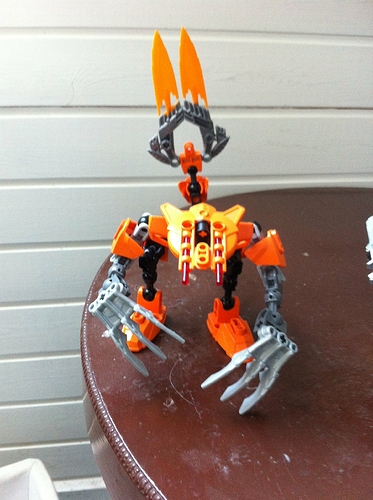 IMG_0081.JPG1936×2592 1.91 MB
Both the matoran instantly stepped back, even though the two rahi seemed calm.
“These are two rahi i made, specifically for you two. i have designed them with the help of Chirox and they should be the perfect matches for you.”
“Wait, wait, wait. WAIT! Why are you a Makuta making two rahi specifically for US!? we are just two simpel matorans for Mata Nuis sake! I mean i am a somewhat talented smith but that is nothing special when you are a Fe-matoran and Hujt here is just a guard! So i would like to ask why you are giving these to us if you dont mind.” 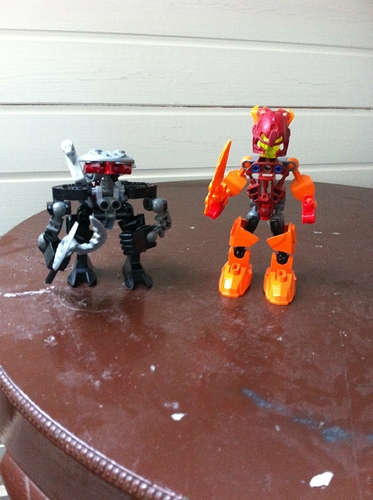 IMG_0080.JPG1936×2592 1.8 MB
“Ah yes, they actually reacted like you expected them too Racnar, i give you that you know these matoran well.” said Chirox
“Well you may not be much but that is not what matters to me, what matters is that i like you two, and you like having me as a Makuta. And you posses courage not even certain Makutas posses”.
“So we are to be owners of these rahi and make research on them or?” Bomjun asked to Racnar with an ironic tone
“Most Makuta would have been mad at you for that comment, but i think Matoran deserve respect. But no you are just in fact supposed to travel the world with these, and document things that we might not know of”
And on that note Bomjun and Hujt set out with their new companions to explore. 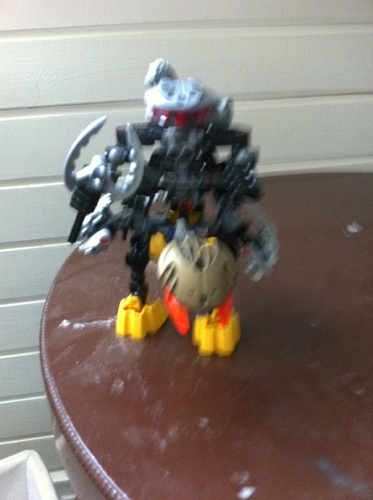 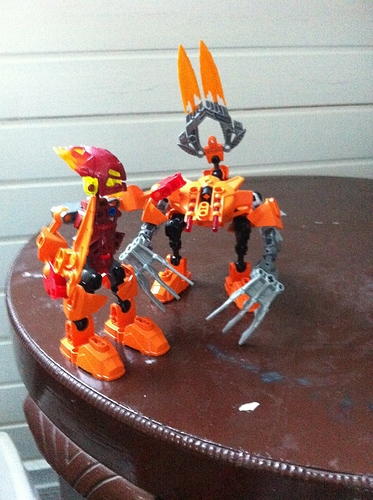 Anyways thats the story so enjoy a few pictures of the builds (Note that Hujt’s build is NOT my design even though im afraid i cant give credit as i cant remember who actually made that design.) 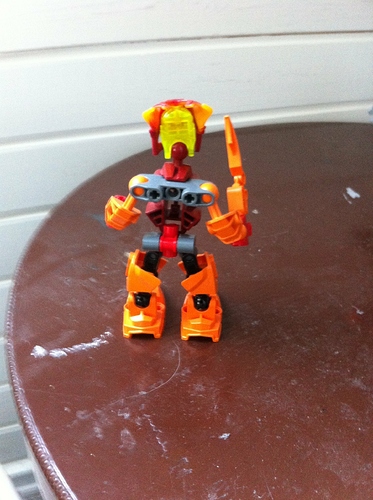 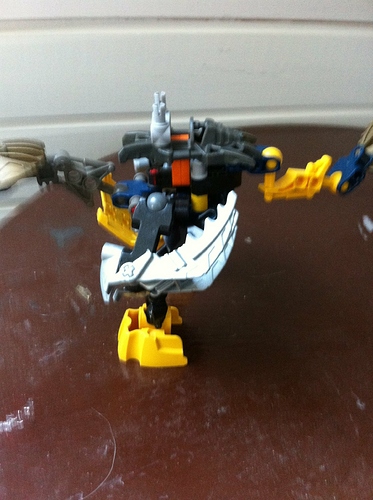 They, don’t really look like matoran, so much as a bohrok va and an agori, the rahi aren’t that bad, though the construction is a little, unrefined? What I mean is there are better ways to construct the torsos, though I can see that you’re improving.

Looking at the parts used for these mocs, I think you could make a rather nice matoran using mostly parts I see here, keep at it.

Theese look pretty good overall, might need to make your self moc a little taller

This needs to be under Lego Creations, not Creative Content.

Ok, there we go. Now, the mocs are OK, but not amazing. I like Hujt much more than Bomjun.