Here’s my entry for the brickonicle contest. 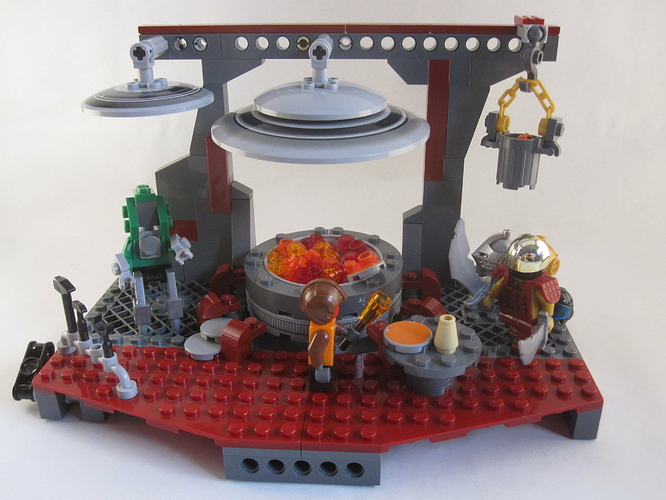 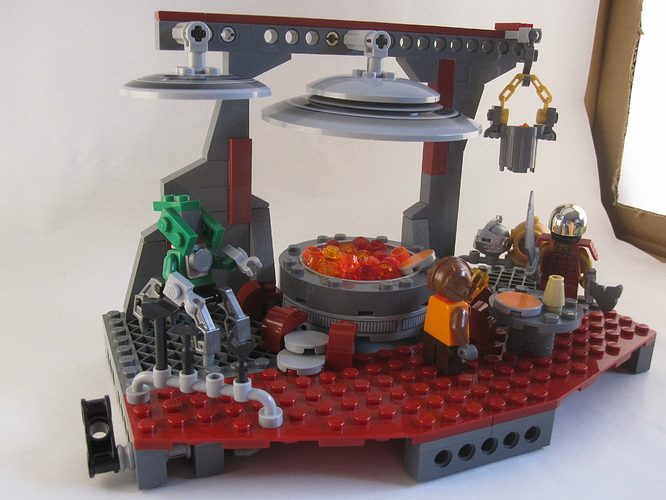 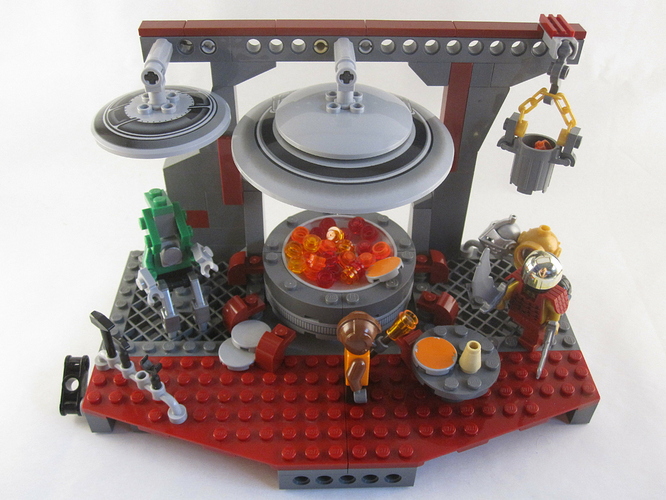 It’s based off a location from the second bionicle movie 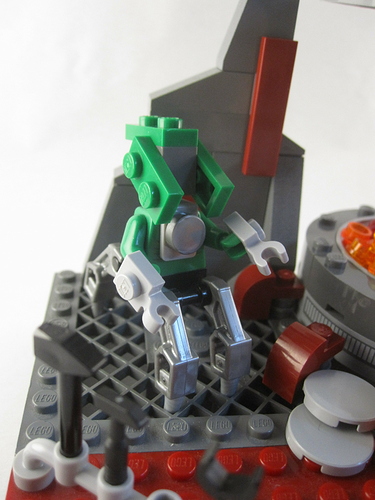 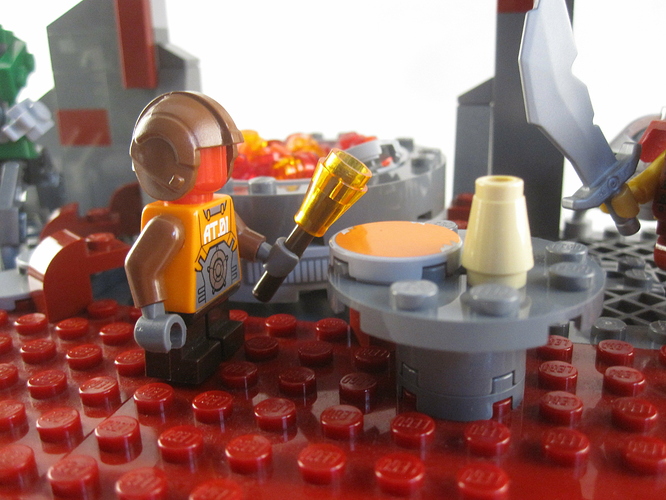 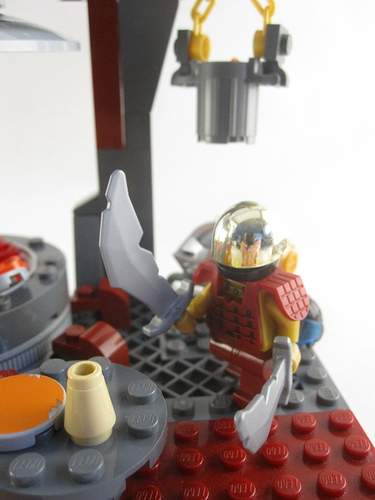 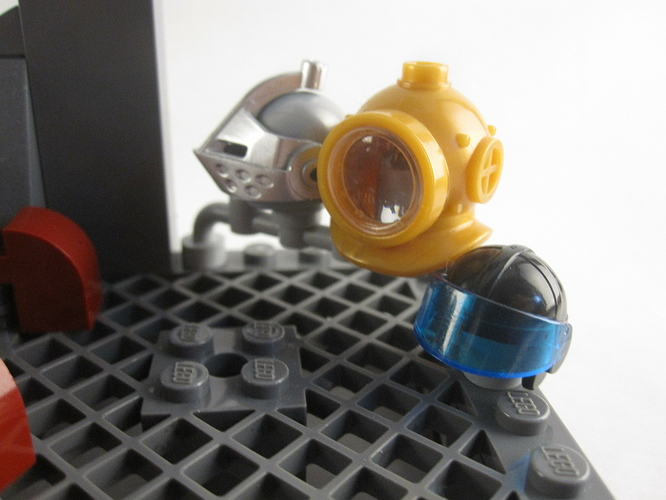 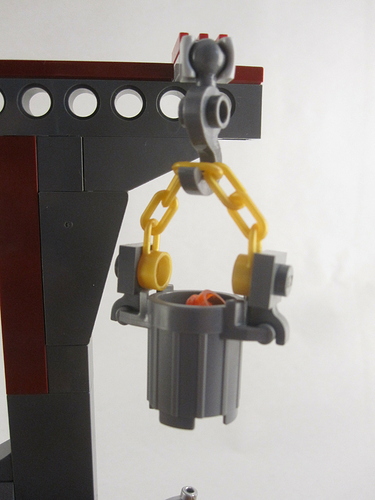 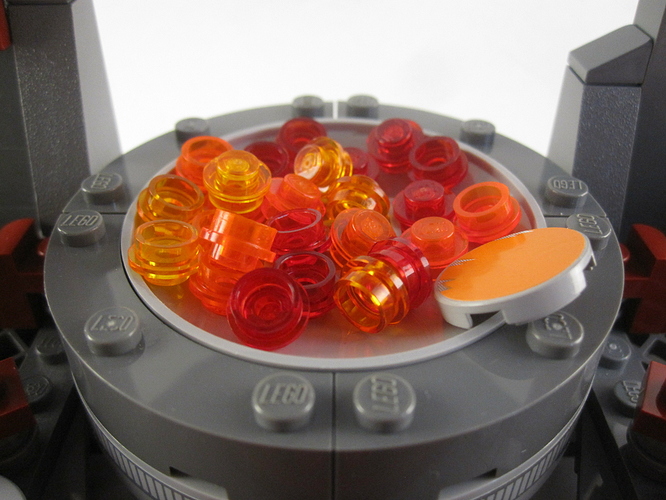 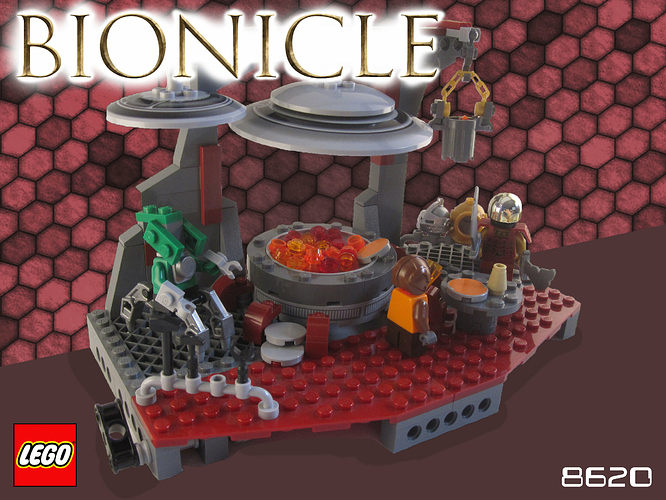 And now for a recreation of the scene from the movie. 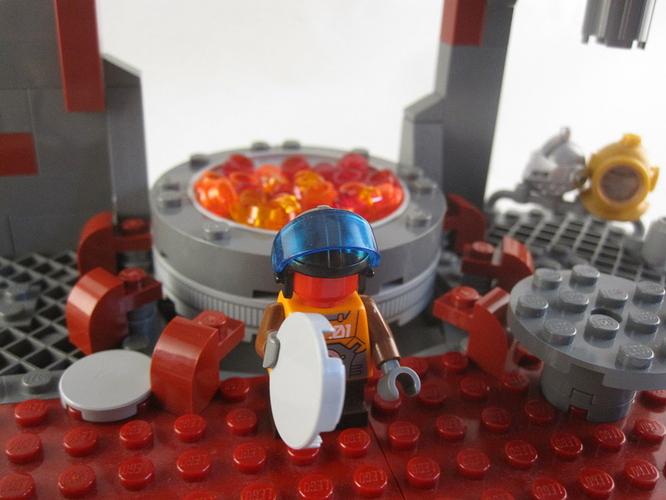 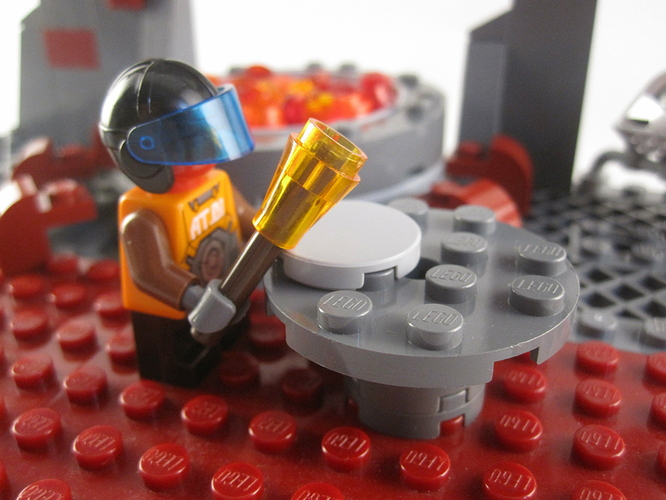 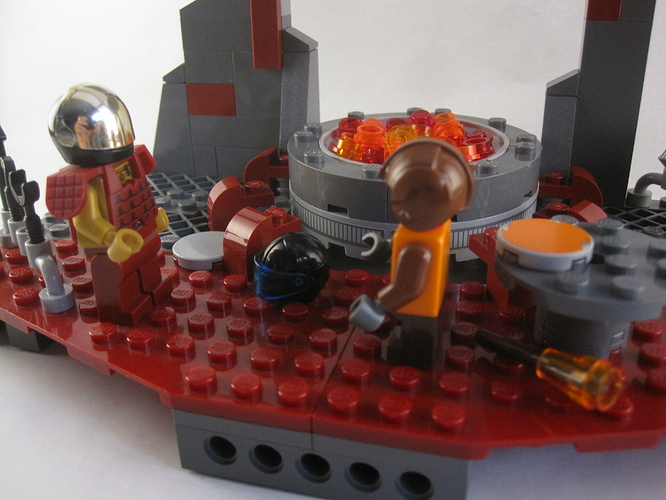 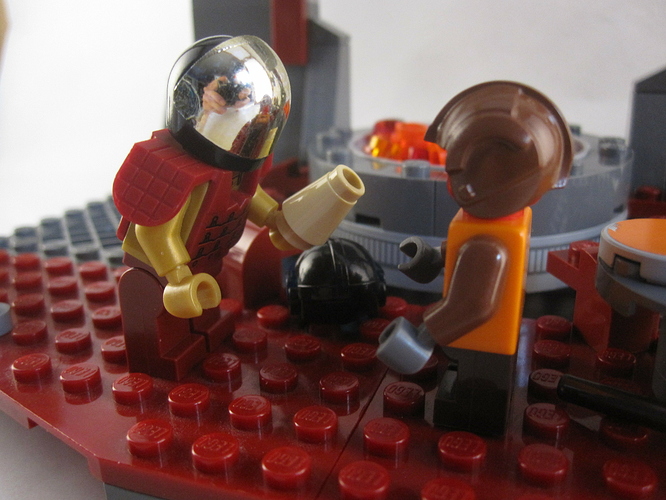 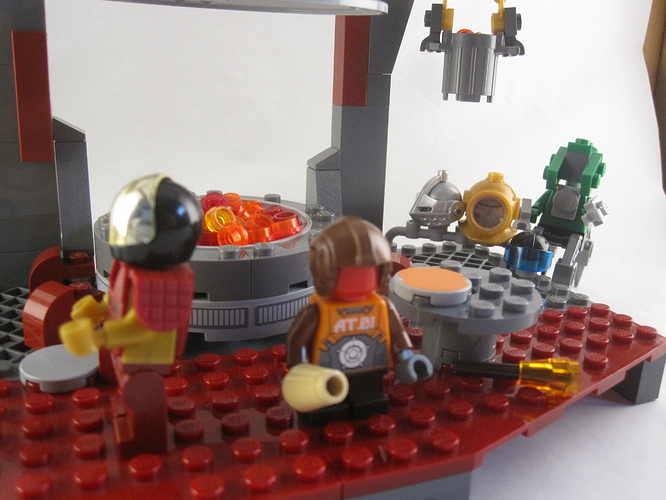 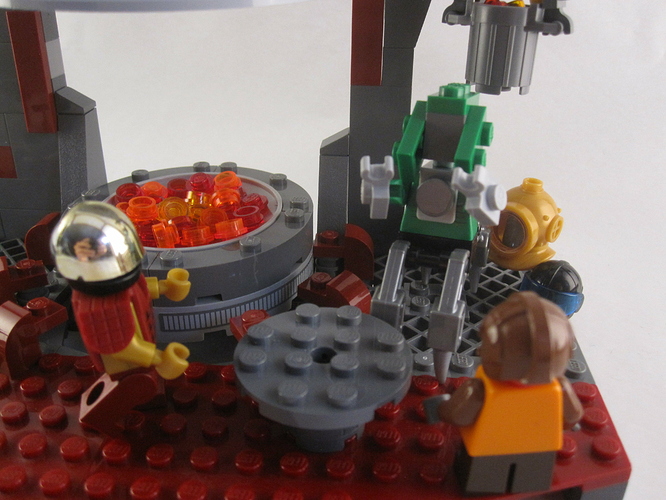 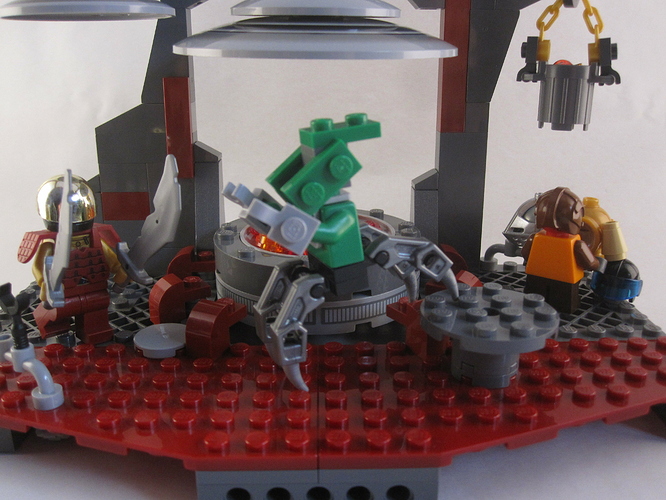 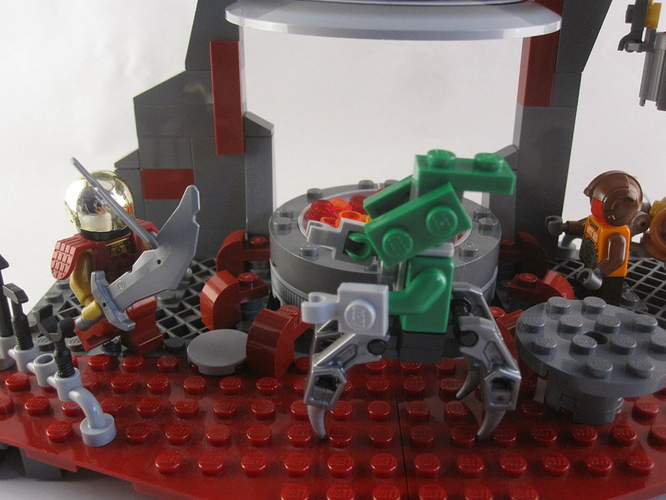 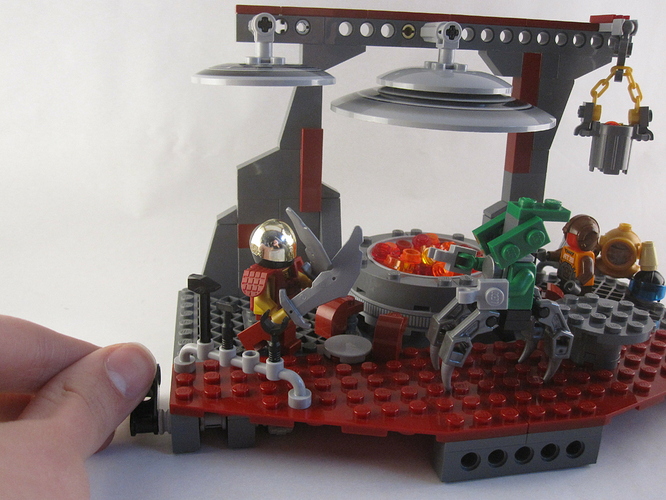 And now for the function. 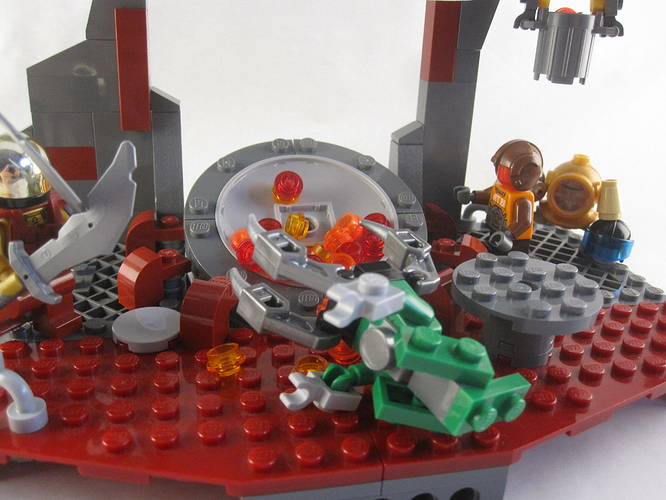 If you flip the lever, the forge spills out onto the enemy 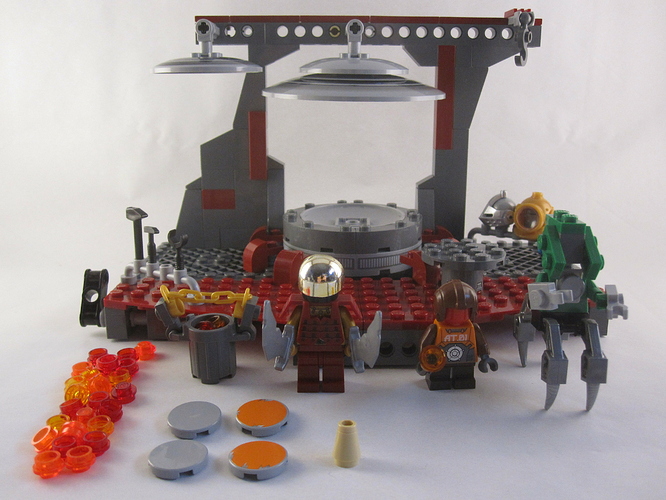 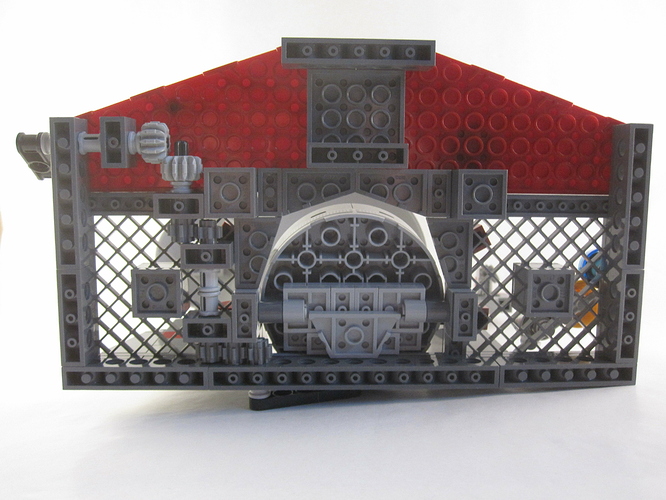 How the function works 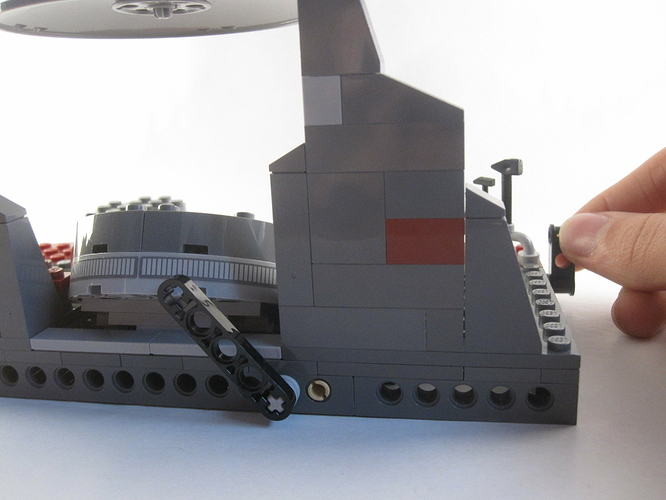 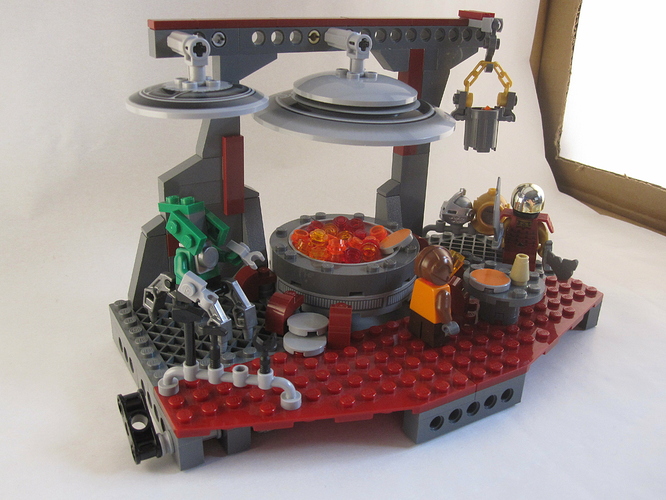 Thanks for viewing! Let me know what you think!

This is really well built and the shaping is excellent! I think there could be a simpler way of integrating the function, but if it works well, it’s fine.

Although you can’t have Vakama’s Forge without Vakama’s little Fire Drone helper! 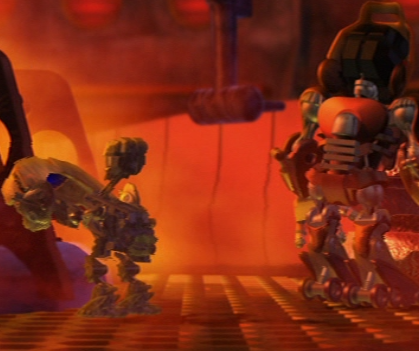 Very nice looking! I immediately recognized it when I saw it. I love how you integrated the function, and used those helmets as masks.

Do not put the LEGO logo on any sort of box mock-up you do, if you have/plan to make some. Apparently it’s a… copyright thing. So I’ve removed it from my box images, and I suggest you do the same just to avoid any sort of legal trouble, if it ever ever evevrerevevr vevsrwe rever happens.

Sure they may own the copyright for the logo, but wouldn’t this fall into the relm of fair use? Anyway, I’m sure lego wouldn’t try to sue me, since I’m not trying to pass this off as a real product, and I’m not making any money off of it.

I don’t know how this idea got started, but no, just no. That’s downright wrong.

Fact: every single lego piece ever has the Lego logo on it. So by that logic, you can’t post MOC’s on the MB’s at all.

I thought about adding Krekka and the drone, but decided against it. They played less of a part in that scene than the three I chose, and it would get a bit crowded with 5 minifigs. 3 just felt right for a 25$ set.

This is amazing! I don’t think you could’ve gotten more accurate at this scale.

A great recreation of the scene. I like the brick built Nidhiki and the function you went with here.

Pretty nice! The scene is very well represented, and I really like the function.

Noice work 'ere mate. I’d probably give it a 8/10, but would still buy again.

LEGO actually does prohibit the use of their logo on non-official productions/creations/etc. For instance, we had to change our channel artwork per their request as it prominently featured their logo on it (even officially recognized LEGO user groups aren’t legally allowed to use their logo).

With that said, they don’t really enforce this. As long as you don’t try to sell products, make a profit, or try to get approved for an official partnership/endorsement you’ll be fine. They have way better things to do with their time then go on a legal witch hunt on any MoC that happens to feature their brand on it.

Although you can’t have Vakama’s Forge without Vakama’s little Fire Drone helper!

A solid $25 playset, the forge is nice but the figures are not distinguishable from appearance from who they are beside Nidhiki, but I digress from people limited inventory-

Reminds me of the $25 Star Wars sets. Good job.

Hey dude, I just have to say that I absolutely adore the way you made Lhikan’s chest gold, but the rest of his torso red!
This is really cool, keep up the good work!

Though (in my mind) it’s not a super iconic part of bionicle lore, this set looks fantastic. The figure selection is good, however if I had to nitpick I’d say that due to how few characters appear in this scene it may be difficult to mesh with other sets from the wave. As a display piece it is phenomenal and in every aspect other than meshing all the waves sets together it is pretty perfect.

The Keystone is thing that unlocks the Codrex (I think).