An architect for the Brotherhood of Makuta. He build grand structures, some of the legendary structures of Mata Nui. Later on, he grew suspicious of Teridax, so he escaped to the ruined Metru Nui. He was shot down and killed by Teridax. 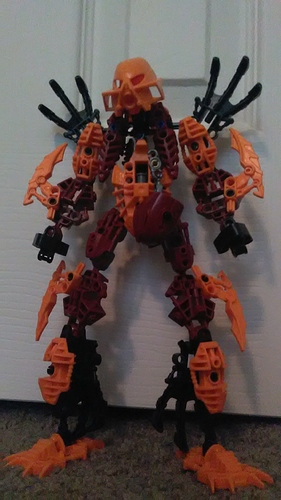 The arms are too short, the legs are too long and I don’t even dare to fathom what thought process was behind the orange spikes, protruding from every limb on a single piece while leaving the axle unused and open. - At least the color-scheme is decent and the torso is less awkward than the rest.

But aside that, not many redeeming qualities.

Hmm… this still needs some work in order to get accepted.

He can’t have built anything on Mata Nui (island) if you’re referring to the “legendary” structures of the Matoran Universe inside the Great Spirit Robot, I actually can’t think of any (aside from the Coliseum in Metru Nui or the Codrex in Karda Nui perhaps, but those were built by the before the Makuta even existed). My idea for a Makuta architect was that he most importantly designed the Makuta’s fortress on Destral and after that focused on… building labs for the various Makuta all over the Matoran Universe as well as more fortresses and such

Him getting suspicious of Teridax… Well, maybe he got suspicious of Teridax before the Convocation - in that case he can’t have died in the ruined Metru Nui (you’re probably referring to the post Great Cataclysm Metru Nui). On the other hand if he died in the ruined Metru Nui he can’t have been suspicious of Teridax because he knew and “approved” of the Plan at the Convocation.
Also what would he even be doing in Metru Nui? Definitely not escaping from Teridax anyways because a) Metru Nui is Teridax’s assigned region and b) Teridax was last seen there (ok, in between Teridax was on Karzahni, but after that he probably returned to Metru Nui).

So, yeah… this doesn’t really work at all.

Oh yeah, speaking of which. - Could my next Makuta be the lead designer for Destral. - I thought it interesting that he would be executed by Teridax after he finished the construction because obviously, he would knew of all the secret rooms, tunnels and places that only selected few had access to.

Could my next Makuta be the lead designer for Destral.

That depends on how this Makuta develops.

he would be executed by Teridax after he finished the construction

But at that time Miserix was still leader. Also Teridax didn’t plan to betray all the other Makuta before the Great Cataclysm. And what advantage would he draw from being the only one knowing everything about Destral’s construction? It’s also kinda strange that the other Makuta don’t know more or less everything about the place that is basically their home - especially the Makuta who are assigned as Destral’s head of security (the last one of them dies with the destruction of Destral through the Order of Mata Nui)
And I guess that since the Destral fortress was built at the very beginning of the Brotherhood the architect Makuta might have designed it, but all Makuta helped building in some way (as overseers, designing their labs themselves, etc.)

First, thank you for your criticism, much appreciated. Secondly, Sorry for the story. Not really good with story and such, Not really well versed in the extended universe, I will rebuild the MOC and I’ll hand over story to you. Your idea was better. I’ll send the link when I am done

Not really good with story and such

Nah, I know I’m quite demanding in that regard.

If you need any help let me know. BS01 might also be a good source if you’re lacking specific story information.

How small can we make them? I’m better with smaller MOCs than larger ones His mask power is Teleportation. I would prefer him to be the builder of some aspects of the fortress