A while back, I made a post about three of my titans, and then afterwards I show-cased one of them, named Quarix. Now I have decided to do my next one, named Carika.

If you need some background history, here it is:

Carika began as a worker in Xia, being one of the lowest due to the fact she always missed opportunities to be successful. Soon, however, Makuta Mutran accidentally left a rock on the island of Xia, which grew into a Xian-eating monstrosity. Soon, competitions began to see who could actually climb the thing, and Carika decided to take the chance and climb the mountian, alone.

She succeeded in her climb, and was rewarded a place of great honor in Xia. It soon turned out to be that Carika was a natural leader, and started to work her way up, once people finally gave her a chance. Later on in her life, she was crowned the Queen of Xia, due to her leadership efforts.

Two Makuta, named Tagah and Furtaan, came to Xia was negotiations from Teridax to build a base on the island. Carika refused once she learned that Furtaan had tried to steel from her armory, and Furtaan was captured by two Toa, while Tagah stayed in hiding. However, some Steltians plotted against her after she denied a deal with the traders, and they planned to assassinate her. Tagah uncovered the plot, and saved her life from being stabbed by them in her bedroom. She thanked Tagah for his work, and released Furtaan. However, she still denied the set up for a base, but promised to continue manufacturing weapons for the Makuta.

So here is the MOC itself. I decided to give her an original hair design that was wacky (I kinda thought of Star Wars when it came to making a queen’s hairstyle), and her weapon can twist around, kinda like Roodaka’s. 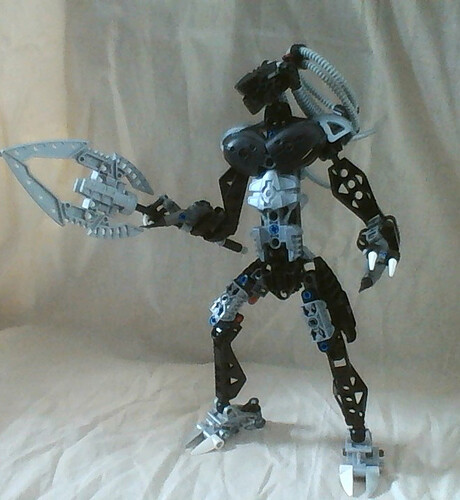 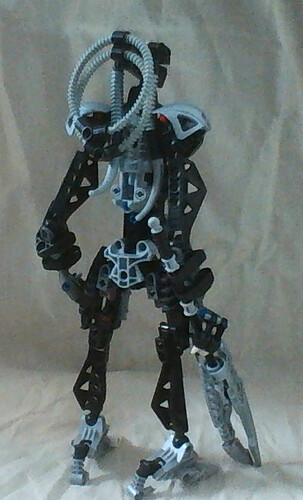 She is not one of my best, but she is one of my favorites. Overall, I liked how she turned out!

Nice job! I applaud you on giving her a unique feel that differs her from the rest of the species. Also, love how you used the Mahri cords as hair.

Thanks. I kinda got that from other MOCers, though, Although, the design of the hair is different, mostly because I thought it gave her that royal feel.

Still, I like how you thought outside the box with the custom design.

I really like the hair man! Although the arms feel… stumpy. Over all a great moc!