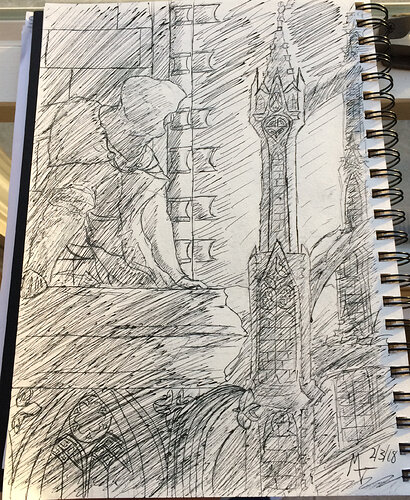 The dying knight’s final words were: “You and your lot are beings of dark, and you shall live according to it. Hear these words, O King of the Brigands: as long as you live, the hosts of heaven will not shine on this land.” The King laughed and spat in his face. Long and hard was their campaign, the hard work of the Brigands, HIS hard work. He was the one who kept them together, making them loyal unto him and him alone, and he would not let these meaningless words impact him.

He awoke late the next morning; tired and slurred from the feast of the previous night. As he looked through the window of his newly acquired bedroom within the cathedral, he sunk to his knees in shock.

Where there should have been sunshine, there was a deep dark. Not even the stars shone, and their candles and torches were woefully dimmed. All about him his loyal subjects cried and shuddered. “Did not the dying knight say that the hosts of heaven would not shine until our great king was dead?”

Ulric cradled himself in the dark, silently groaning at the thought that the Brigands would go another day without the food of their conquered peoples. He had lost count of the days. Had it been a year? A month? Time passed so slowly he could not think.

Perched atop one of the flying buttress towers, a warmth began to creep upon him. Turning to the East, he gazed around the corner of the tower. He fell to his death shortly thereafter, and the rest of the Brigands were reduced to a mass panic.

The sun had risen, the King dead, and the creatures of the dark were blinded in it.

It looks good, it the shading should be a little lighter. I feel like it’s mostly just dark lines everywhere, and it looks a tad messy.

Other than that, it’s really well done!

Thanks for the feedback, I appreciate it, even if this piece is 9 months old