Champions of the Distant Past (Canon Contest #3: Honor Guard)

The most elite, picked from the best the universe had to offer, the Toa Hagah stand tall having weathered the sands of time and the fires of betrayal.

I had a couple of main goals when going in to making these designs:

Since it seems the most convenient for the structure of the contest, I’ll list each of the missing Hagah separately below with their entry pictures and breakdowns, as well as providing some of my reasonings for their designs. There are also a couple of rules that aren’t entirely clear to me (namely the meaning behind “single-ended spear”), so I didn’t want to post too close to the deadline so I had a bit of time to make changes should the need present itself. 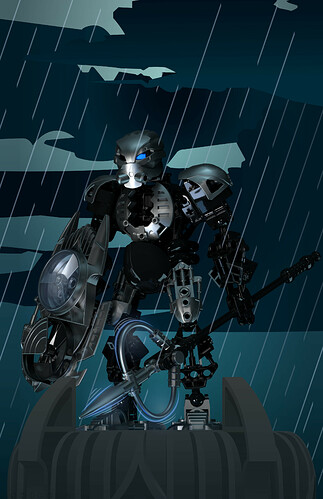 The ever-patient hunter, Bomonga is built as sturdy as a building–a solid mass of muscle–able to spring into action after days of sitting perfectly still while hunting his quarries. He wears dark grey metallic armour, and his mask is forged in the shape of a Kanohi Iden. For most of the mask choices, I wanted the mask powers to have some kind of throughline, and while the Iden doesn’t really modify the physical form, I ultimately landed on it for its shapes–especially with the rounded shapes on the back of Galva’s Iden resembling the round macaroni pieces used to fill in his sides.

His Seismic spear somewhat resembles Whenua Hordika’s thumpers, since I imagined its secondary power would likely be something vibration-related, given its name. While his spear is pearl dark grey in the entry image to conform with the contest rules, it was originally built with dark bluish grey pieces, and can be done so to not look out of place with the model while not having to paint any pieces. 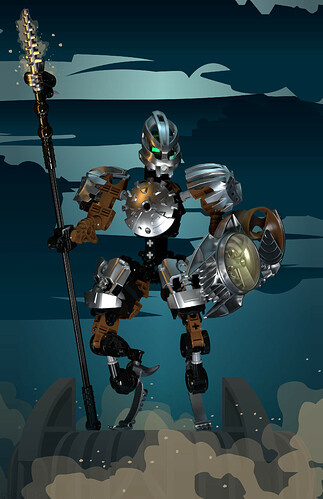 Loud, friendly, and straight-forward, Pouks has become the design I am happiest with. Built for athleticism, he can run circles around the largest of Rahi, his blade-like prosthetic legs giving him shape language that suggest speed and paying some homage to Pohatu and the idea that Toa of stone might more commonly have foot-based eccentricities. Pouks wears silver metallic armour and his mask is forged in the shape of the Kanohi Faxon. I like the shape of the Faxon for him quite a bit, but I also chose it because of its similar mask power–being able to copy a more limited set of abilities from other creatures.

Galva’s Faxon aside, this design is nearly 100% buildable with all but one of his 105 pieces coming in the colours used–the exception being Turaga Whenua’s staff used as the spearhead only coming in black. Despite that, he should be easily buildable and look nice for all the purists out there. 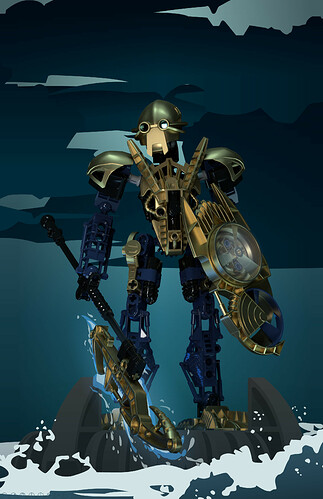 Competitive and eager to prove her mastery over the capture of aquatic Rahi, Gaaki boasts a powerful build and specialized tools. Since its the bulk of what we know about her, I decided to focus down on her prowess as an aquatic hunter for her design, with broad, strong shoulders and large fin-like feet to help her swim. She wears gold metallic armour and her mask is forged in the shape of the Mask of Sensory Aptitude. I like this mask shape for her because it both loosely ties into the theme of the mask power and matches her design well–with the fin-like protrusions and goggle-like eyeholes.

Continuing with the aquatic Rahi hunter theme, I wanted to make the Tidal Spear look like a harpoon, and I think the somewhat underslung Zadakh staff succeeds in capturing that vibe. When it comes to colours and piece availability, Gaaki’s design is a bit less purist friendly. While the bulk of her 91 pieces come in the colours used, and all of her armour pieces come in pearl gold, its basically impossible to get her kit to match using physical pieces without painting some mixture of the armour, shield, and spearhead. Should it be your desire, though, she is much more elegantly buildable in silver. 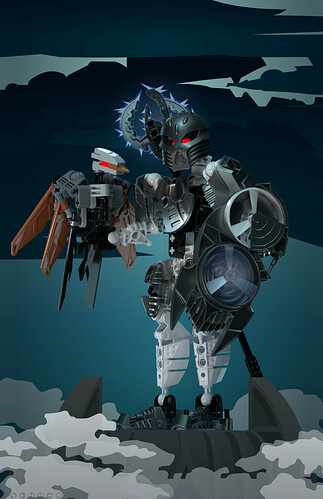 Steel-willed master of the skies, the no-nonsense Toa Kualus has perfected his skills and specially designed his kit to assist him in the capture and taming of airborne Rahi. He wears metallic dark grey armour and his mask is forged in the shape of the Kanohi Rau. I like the throughline of the mask powers between translation and Rahi control (especially with Kualus having spoken the language of the flyers), plus Galva’s Rau has those grill or ridge like designs that match with the lines on his shoulder and thigh armour.

The Sub-Zero Spear, while not as narrow or aerodynamic as many of the other Hagah spears, I designed it to look somewhat like a catchpole–Kualus being able to grab hold of and control Rahi he was working with. Additionally, as an accent to Kualus himself, I built a young Gukko bird for him–its design based off of the 2003 set and Agil’s build from 2016. When it comes to building Kualus with physical pieces, he has more unavoidable painted elements, those being the chest armour, thigh armour, spear tips, and shield.

As mandated, here is a height comparison of my four builds–all of which are neither shorter than Whenua Metru nor taller than their brother Iruini. Gaaki is nearly as tall as Iruini if neither of them are masked, but with their masks on Iruini remains only slightly–but clearly–taller.

It has been a blast working off of basically non-existent character traits and descriptions to come up with interesting builds, silhouettes, and physical characterizations for these Toa. I hope you like some of the designs I’ve come up with, and it’s been lovely to see other creative designs be built along such seemingly strict guidelines. Below is a group shot of all six Hagah together so you can get an idea of how they look directly alongside Norik and Iruini, and all of the needed resources a la parts and stud.io files. Cheers! 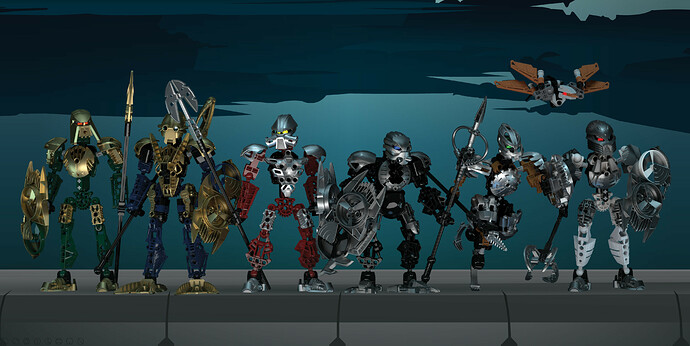 The parts pack that provided a large number of official Bionicle elements for Stud.io can be found here: https://www.reddit.com/r/bioniclelego/comments/i74vqw/biopack_update_is_there_happy_810nicle_day/

The Galva pack, which contains all of the custom masks used, can be found here: https://www.reddit.com/r/bioniclelego/comments/n3inyv/studio_the_galvapack_150part_update/

The emissive materials used for the main entry photos were created by Tyfighter77 over on the Stud.io Discord server, and can be downloaded here: https://mega.nz/file/zoEQza7C#Mbm_OyPxr7ocaomeqSiuT1I5Cx9YRvezAMf5zLkU9ng

Also, not really a custom part used but credit where credit is due: the Hagah pedestals are based off of the old advert, but Vakhi6’s 3d model was specifically used as reference for my illustration.

And finally, here is a link to the folder containing all of the original Stud.io files for my Hagah: https://drive.google.com/drive/folders/14q67Tlqr7iY92KJhTSLWaoFTAKZfz-5b?usp=sharing

Finally, we have beer belly Bomonga.

A visually stunning presentation fitting for astonishingly unique designs. Bless that Pouks so much rn.

You have my support and vote! Cheers!!

Finally, the thunder-thighs Pouks we deserve
Albeit the prosthetics are strange but I think it will grow on me.

I’ve seen other well rendered entries but wowie these are great with the pedestals, backgrounds and dynamic metal rendering! Looking at the actual designs, I like the Ignika pads on Gaakis legs and the usage of existing metallic colours. I’m not 100% sold on all of them, the beer belly on Bomonga does seem a bit off and strangely Pouks and Kualus look more feminine than Gaaki? Maybe that is just me, it’s not a biggie and won’t stop me voting for these.

On the whole, great MOCs and great artwork to match. Backgrounds do really help to make entries stand out.
I would have put these reasonably high on my list of preferences, but the lack of consent to any changes (particularly metallic colour) is a dealbreaker for me personally.

My favorite here is Pouks so I’m wondering if the moc can actually stand irl.
Edit: it’s sort of a pet peeve but it’s uneven for me to see a hagah team with only two gold members (don’t say it). It doesn’t feel evenly distributed and it makes it feel like one hagah and Iruni are more important than the rest which of course is not true.

If this Pouks manages to qualify, I will carry it to the moon. Poor mask, not very experimental armor color, but the moc has artificial lower legs and that alone (with the icing being Pouks’ thunderous thighs, of course) is a wacky enough take that this deserves to win.

Yep, if that Pouks doesn’t get DQ’d, you have my vote every time. Good luck!

I love the Pouks and his jumping feet!

Pouks is an inspired design here and has my vote.

I’ve noticed this Pouks looks a bit similar to this MOC from Socketball. 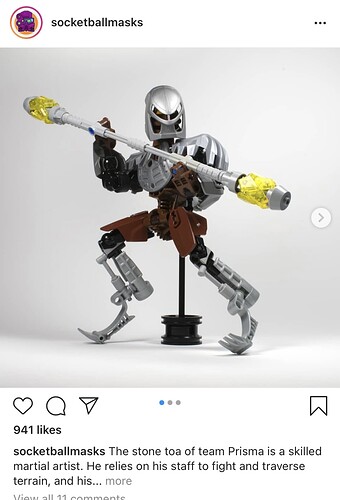 I’ve noticed this Pouks looks a bit similar to this MOC from Socketball. [image]

Oh, yes! I’m a big fan of Socketball’s team Prisma MOCs. I was originally inspired by this exact design to go for the blade-like prosthetic legs with the Barraki mandibles, but I hadn’t noticed they have the same piece used as shoulder armour too.

My favorite here is Pouks so I’m wondering if the moc can actually stand irl. Edit: it’s sort of a pet peeve but it’s uneven for me to see a hagah team with only two gold members (don’t say it). It doesn’t feel evenly distributed and it makes it feel like one hagah and Iruni are more important than the rest which of course is not true.

Sorry for the late reply, but. He might have a little bit of trouble standing on his own without careful posing, but to account for that the back of his spear is longer so he can lean on it for an extra point of contact.

So did Pouks have his feet surgically removed for those prosthetics?