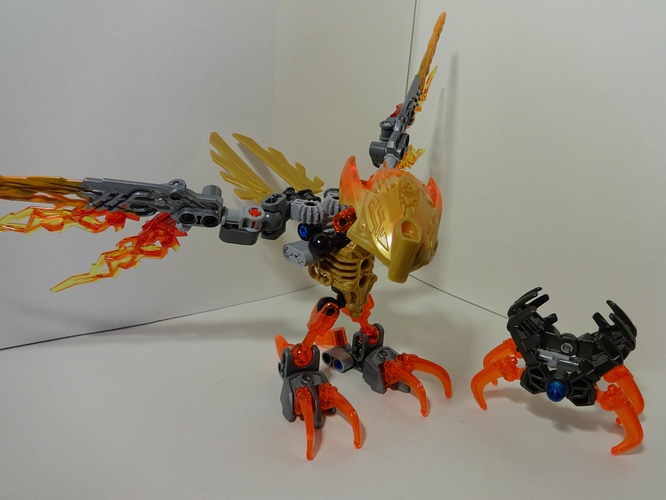 Ikir is the envoy of the fire element on Okoto and imbues anyone who unites with it will be imbued with courage and a fiery might that will make any opponent fearful.

Ikir is a pretty cool set. So far he is my favorite creature out of the six creatures. Let’s get into the review.

Obviously these are going to be my opinions.

Pros:
- It looks like it’s element. I am very happy with how the fire theme is implemented in this set. I can tell straight away that this is the creature of fire.
- It looks like a bird. This set pulls off the bird look pretty well. It has talons, legitimate wings, tail feathers (at least what I think are supposed to be tail feathers), and what could be a beak.
- The color scheme. The color scheme is done pretty well in my book. the implication obviously is that Ikir is a phoenix and the color scheme really helps with that. Plus it makes Ikir look fierce.
- The functions. By moving the “tail feathers” up and down, you can make Ikir’s wings flap. Also Ikir can combine with Tahu, Uniter of Fire.
- New Parts. We get the creature headpiece and two crystal fire swords. It also comes with one of the new armor pieces in gold.
- The shadow trap. This thing is big and pretty cool looking.

Things I can Pardon:
- The legs. Now the legs use one piece to connect the feet to the body. Obviously real-life birds can bend their legs and this should be a con. But since this is a smaller set, I will let it slide for now. But if there is ever a bigger version of Ikir like this set, this will be a con.

Cons:
- The head is hollow. I know, Ikir needs to combine seamlessly with Tahu, but it still looks weird.
- Certain parts might bend. The Crystal swords and tail feathers on my set won’t stop bending. And I’d imagine it does this with other sets.
- The feet have to be constantly fiddled with. Ikir’s talons can be easily moved, especially his back talons. So naturally they will be all over the place from picking it up and setting it down.
- There are no instructions for the unity function in the instruction booklet. YOU HAVE TO GET AN APP TO GET THE INSTRUCTIONS FOR THE UNITY FUNCTION. SHAME ON YOU LEGO. SHAME!!! And back in the day, this stuff would have been in the instruction booklet!
–(Minor update note: I did find a little diagram on the back of the box showing you where you are supposed to place Ikir on Tahu. But it is really small and my point still stands: This should be in the instruction booklet.)–
- The head does not latch onto Tahu’s mask. You thought those dips in Tahu’s mask kept Ikir in place? NOPE! Ikir’s head doesn’t even go anywhere near them.
- Ikir’s head is a chunk of plastic… Enough said.
- The shadow trap makes no sense for Ikir. Ikir can fly… and the shadow trap is based off of a bear trap and doesn’t have any sign of flight-type propulsion… WHAT WERE YOU THINKING UMARAK!!!
- Ikir can fall over. If you have it’s wings pointing behind it, Ikir can fall down unless he is positioned right.

Would I recommend this set? Yeah…despite what I said in the cons, it’s still a pretty good set. Definitely a must have of 2016.

One of my favorite creatures along with Terak.

Ikir is probably my favorite creature this wave. Great review.

Birds have to land sometime. And neither does Uxar’s.

That’s no excuse. Ikir could fly really far away from any shadow traps and I’d imagine that he would have a lot of energy to do so considering he is the envoy of the fire element. Same thing can apply to Uxar.

Also, how do we know Ikir couldn’t just fly away with the shadow trap stuck on his foot?

Also, how do we know Ikir couldn’t just fly away with the shadow trap stuck on his foot?

Also, It’s possible these things only move once they have prey for Umarak.

It’s possible, but I’d imagine it would have to be really heavy for how powerful Ikir sounds.

If a shadow trap can manage to trap Ikir in the story, fair enough. But I still feel it doesn’t make sense though. I cannot imagine using a land based trap on something that can fly.

Great review! Ikir is one of my favourite creatures, next to akida and terak.