Yep, for those who follow the posts I make in this section of the Boards, you’d know that I once made a topic called Lights O-Nope. Can’t do it. Well, the reason for that is basically: I wanted to make my Toa Team and show them off in pairs. But since Nyran is my self MOC, I figured "Okay, I’ll give Azard his own topic. and then give Jalis and Baronon one to share, and then I’d give Nerai and Solinari a topic to share.

Well, now I’m finally happy somewhat with both of them, so here goes the topic. 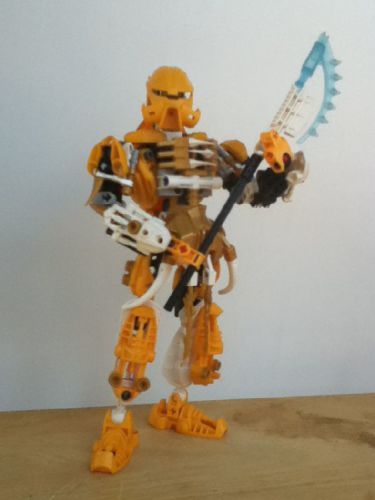 Here’s Solinari(Soli for short) and while not much has changed, what has changed makes her look all the better, to me at least. 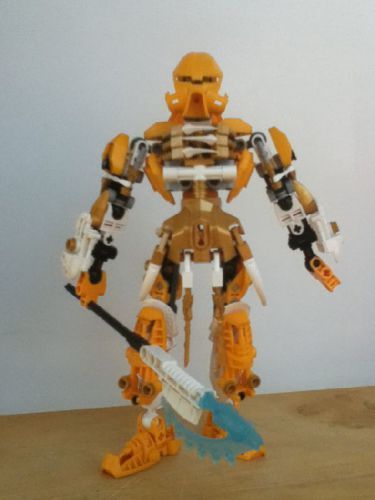 Just standing straight, although, I probably left the arms too far out, but whatever. I think the shoulder/upper arms are a bit messy, but I think they work out for her. She’s certainly bulkier this go around. Mostly due to the keetorange Matoro/Mata Nui armor on the sides of her torso. 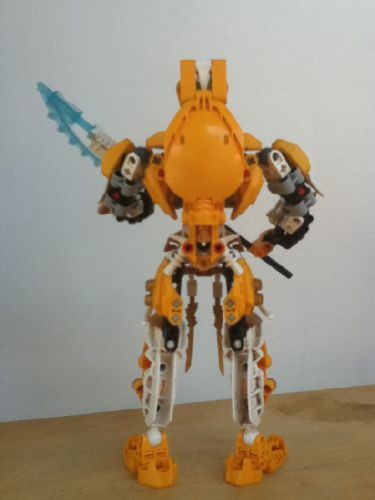 Here’s a back view. I wanted to see what a Bohrok shield would look like when used as hair. I think it turned out well. 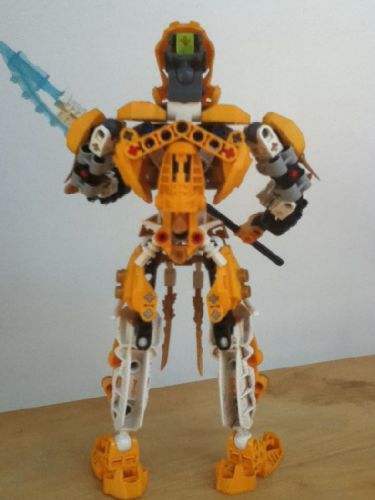 Without it, you can see the epic coincidence that is the technic liftarm. I had no idea that would work out, but it makes the torso amazing(Little-known fact, the last torso design was wobbly) 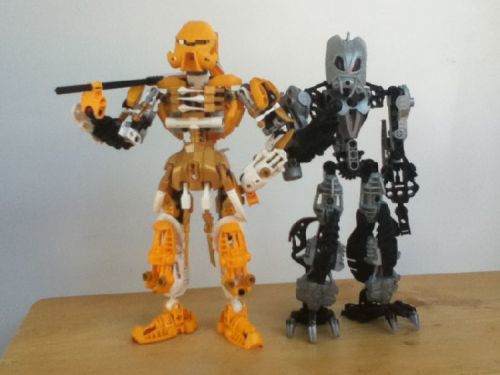 Only slightly taller than an inika build, but I’m okay with that. 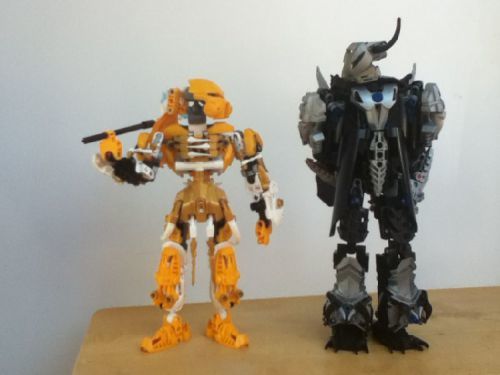 Does lead to some…weirdness in scale, in some cases, though. But whatever, Nyran’s just a tall dude. Reflective of me IRL. 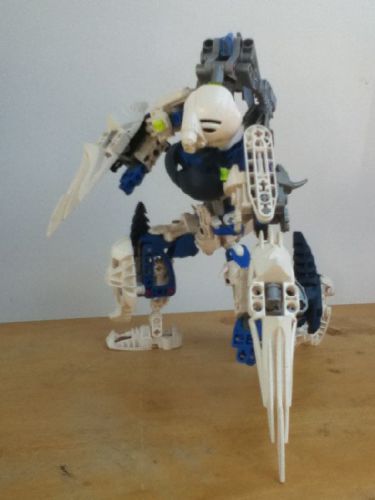 And now for Nerai. Super happy with how she came out, even though she does use a technique that many frown upon. Honestly, though, with how solid the rest of her torso, as well as the legs(and to a degree the arms) work out, I think it’s fine. 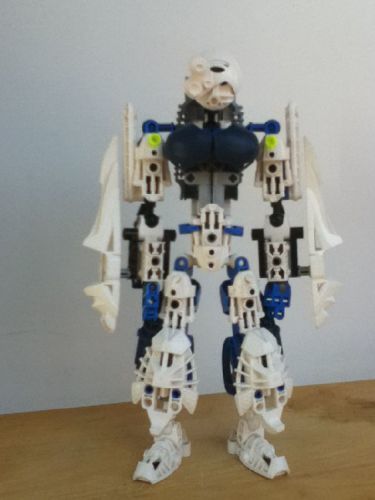 Hmm, prolly could’ve posed this better. This picture does kinda look not as good as I’d hoped. 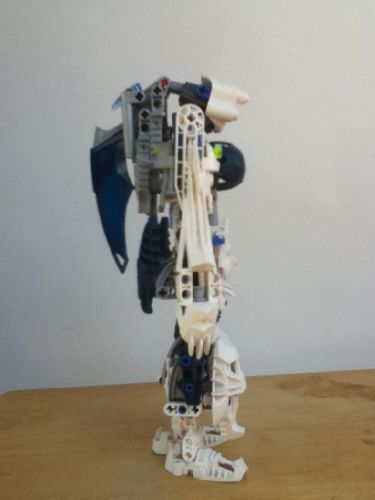 Yes, all those thornax pieces, as well as the Vamprah wing are all part of the hair. I think it’s ridiculous in an epic way. 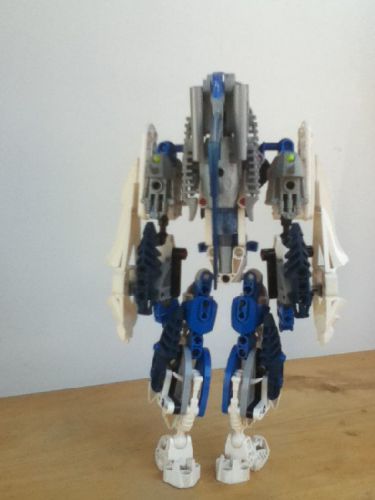 And from the back. She looks okay from this view. I wanna replace the silver inika leg armor on the shoulder/upper arms with white ones. I just need to get some more. 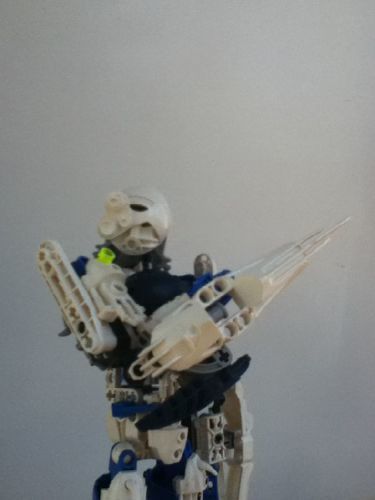 Yes, the Pridak feet on her arms are supposed to be weapons. I think they make great spike/blade weapons style things. So yeah, I think it works out. 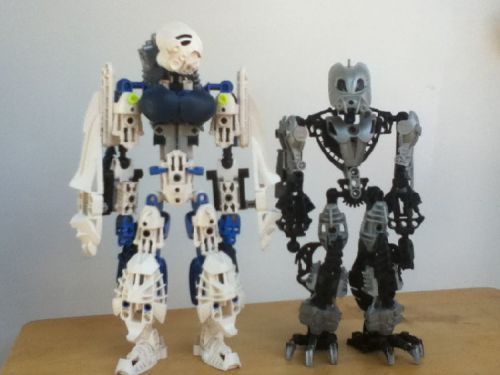 And vs. the Inika Build. I think she’s of an okay height. Taller than Soli for sure. In closing, I wanna say that I think the Dark Blue needs to go away entirely, and I’ll work on adding in much more of the mata blue. Because Lightning Toa are supposed to have more blue than white, IIRC.

Also, the Akaku was chosen for a specific reason: The way the top of the eye lid is angled, combined with the lack of lght piping on the lens eyes, made me think of that thing where like, a girl(or guy, I don’t discriminate. 8D) will like, make their hair cover just the one eye, so uh, yeah. 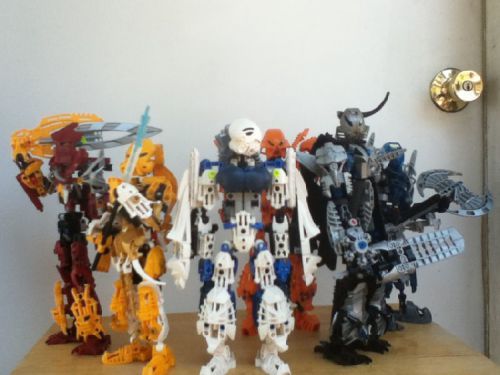 And finally, a shot of the whole team. Alas, poor Baronon. Obstructed from view by his own armor. Nerai, BTW, is leader of the team, hence why she’s in front.

Bohrok WINDSCREEN doesn’t look too good for hair to me. Colors do look a bit better though. With Nerai, the nuvaboobs do look out of place, but only for the reason that they are dark blue while the rest of her armor is white. If you don’t have white Nuva shoulders (or maybe even if you do) I would suggest a different breast technique that better fits her color scheme and also covers up the area below the shoulder plates.

That’s part of what I was talking about with the Mata Blue.

Those, as well as as many technic bits as I can, like hand pieces and stuff, because I wanna integrate more of that. Which means that the Visorak feet will have to go and become white.

Nice. Miles ahead of my Inika build MOCs.

Her unique build is very unique!

The gold seems to not fit with the build, in my opinion, it’s just that it only apears as a skirt while the rest of the body is a mix between white and Keet-orange.

And, my last critique is that staff head. The Trans-blue clashes with her color scheme. I don’t have any suggestions for what you could put, though, It’s your MOC and you can do whatever you want with it. If it looks good to you, why should I complain?

But, what still stands is that this MOC is wonderfully designed. Very nice shoulder length, (the neat trick with that Technic bar

) the hair is nice, the arm and leg armor blend well and you even gave her an hour-glass body.

Nerai: This ones great in some areas and weird in others.

My favorite parts are:
The Arms, the Back, the Hair, the Mask, the Stomach and the Back of the Legs.

The parts that a weird are:
The Chest, the Sides and Front of the Legs and the Feet.

Like I said, “This ones great in some and weird in others.”

But in overall view of your Toa team (From left to right and concerning position poses and other stuff):

All in all. Great job! Your MOC’s are well presented, very good and well thought out.
This team has great potential and I am looking forward to your tales of RoT!
(Whatever that acronym stands for

Thanks so much. I agree with most everything you said.

The gold does work with the Keetorange, I just need to distribute it more, in bigger pieces all around. The chestplate for Soli is also gold, BTW. The trans-blue on her Shine Staff’s head is meant to represent a luminous glow, showing that it’s partially active at all times.

Nerai, as a character, is driven to lead the team onto Spherus Magna because of the last wishes of the character Zacchaeus(who I have yet to post). He was a Toa of Iron that was friends with Nerai while she was a Matoran. He protected her, and when he gave up his power to her in death, his desire was that she would do for others, what he did for her. And so she desired to defend Spherus Magna, and upon walking about it, she met the newly dubbed Toa Nyran. He suggested the idea, and she agreed. Nyran has a very passive personality, not really wanting to make decisions. The others all joined later, one by one(Except Azard and Baronon. They joined together.) and Nerai’s more the one who makes decisions more than others.

Overall, the team usually agrees on things before a decision is made, outside of battle.

I agree with every word on the posing critiques.

I was pretty sure you had a good reason for that staff.

I’m guessing your antagonist “The Reborn Makuta” (Or, whatever their real name is.) are soon to make a full apearance?

Three of the Makuta, Viradox, Razira, and Thenrus have all appeared in MOC form, if that’s what you meant, but in-story, they are the catalyst that starts RoT.

Well I meant a full appearance, like you have done for your Toa.

Blacklight is giving me…technical difficulty, but once he’s done, I’ll have something for everyone to see along those lines.

Blicklight’s kinda super huge, and I suck at large MOCs.

I will add more later… not much time :L

A note on the leg size comment, if they become too skinny then everyone (including myself) will hate on them for being anorexic. And remember, girls can be buff too.

The stereotype of skinny girls is eating your soul.

Stereotype is real, seen too much “skinny” legged Woman here in Poland >.>

Oh man, I sure wish I could dump all sorts of cash onto something like that.

Well, thing is…Didn’t really want to admit this, because I dunno how well I did, but with Nerai, I was Attempting to emulate the look of baggy clothing.

To Azard add White (matoran of plasma usues mostly orange and White colours, and little more colour will work out)

Legitimate complaint, I’ll admit, but I explained my reason for the grey in Azard’s own topic. I grew attached to the color scheme, before we ever learned what official colors for Plasma were(2008)

You just brought up color and canonicity, and now you want me to go against it?

I plan to rework colors, by adding in as much Mata Blue as possible. And ditching the Dark Blue.

Toa Jalis is named after the Tribe of Warriors from Deltora Quest. The uh, the Diamond one, for fans of that series.

Eh, fair enough, but honestly, I like it, but if you don’t, uh…sorry?

Yeah, I already did that, I just didn’t mention.

I don’t much care about weapons, that much. Nyran, and Azard have like…the most custom, and I’m happy with those. The others…eh. I think they fit the characters, so it’s fine.

So yeah, I have room to improve. Lots of room. And I’ll work on that in the future. But I like to think I addressed everything major.

While you will be improving your team… i will Finnaly Shot the photos of mocs i made past 2 weeks! (well not right now >.>)

@Nyran Also, can you tell me why exacly Nerai has Those Antena Pieces in Trans Greenish Yellow (as connectors)? They look kinnda out of place