Anybody remember that project I started two years ago that never happened?

Drat. I can hope I guess.

Anyway, welcome to City of the Fallen: Rebirth. The new and improved, actually-might-happen version of the original City of the Fallen. The terms have changed and the story is different, but it’s still at its heart, the same project. Primarily, the story will now be written in a chapter-based format, but it’s important to note that I haven’t yet ruled out the original, full blown stop-motion project it was originally meant to be.

Alright, the point. Where is it?

I need characters to fill my world. In this story, more than just the main characters have roles. That’s where you come in.

If you have a character who would fit in the universe, or would like to make one, I can put their template to use. The story is set in a run-down steampunk-era city ravaged by crime, plagued by a corrupt government, and haunted by a mystery serial killer known only as “Specter”. In addition, a notorious mafia has set up shop just outside the border, and now has an iron grasp on the political and economy affairs of the whole city, and with the victims of the Specter returning, the forces of Heaven and Hell have returned to ensure that the dead stay that way.

Your character must fall into one of four categories. A member of the mafia, a champion of Heaven or Hell, or just an average fellow who’s been caught in the devastating crossfire. Their role in the story is closely dictated by your choice, so be sure that what you pick is what you want.

Any character submitted and accepted will be placed in the story as a third-level role, where main characters are first-level and side characters are second-level. Essentially, they are world-building characters, unimportant to the story but vital to building the universe it is set in. All characters will be sourced, so don’t worry about them being used without due credit.

There are, of course, some rules and regulations for characters.

1: I’m not against dark backstories. Almost all my characters have them. However, if it violates the rules of the boards it probably can’t be included. If you are worried about the backstory, PM it to me and I will see if it can be implemented, however.
2: Following the format provided below is ideal. Please do so to the best of your ability.
3: No OP characters. If your character has powers, I will likely nod to them somehow but saying “he’z s0 strunk n he’l rek u 1v1 m8” isn’t interesting character writing. If I needed cardboard cutouts I wouldn’t be making this post in the first place.
4: This is a story independent of any existing universe, so all Toa or Hero characters will be automatically converted to a fitting species within the story.
5: This is not a rule, but if you have trouble describing your character’s personality, I recommend trying to take any personality test in their shoes. It goes a long way towards describing them.

The last important thing to note is that if this does become a stop-motion series yet again, I will be looking for voice actors and actresses, and this topic may receive updates as the project progresses.

I am happy to answer any questions you might have. Thank you for your time. I know this was a long wall of text.

quick question
what Species are there?

That’s dictated by your faction. There are Dengels, which are the standard “human-like” species, there are the obligatory Demons and Angels, and as a member of the mafia there is the possibility of being an Outlander, which is essentially a wandering Dengel who has adapted to the harsh desert conditions outside the city through their own various means.

Choosing a faction will automatically choose your species, although with the Dengels and Outlanders I am willing to blur the lines a little bit if you really want a wanderer who isn’t a mafia.

Steampunk here primarily eliminates computers and electronics. Electric lighting exists but is expensive, and the primary form of lighting is traditional oil lamps and the such. Firearms definitely exist, and tend to be handguns or hunting rifle type weapons, although a “sniper rifle” is not unheard of.

If you have anything you specifically want to know about, I’d be happy to elaborate.

What about automatons, skyships, and other steampunky stuff like that?

Also, since there are angels and demons, is magic a thing in this world?

Automatons do exist, but are incredibly expensive to build and are unlikely to be a common-place item. Skyships are certainly a thing, although share a similar fate as the automatons, and tend to be used primarily as a way for high-ranking political officers to “set themselves above” their subjects.

Also, thank you for bringing up magic. Was just about to mention it myself, but you saved me the trouble. Magic indeed does exist, primarily in the form of ancient artifacts and items. For example, Solarium is Aurai’s blade, and has the unique property of time manipulation, allowing it to fast forward, rewind, and warp the user’s timestream.

There is also a hidden “cult” of warlocks, hidden somewhere in the city, who are capable of powerful magic for the right price. Their typical services include memory wipes, cloning, and physical augmentation such as increasing strength or restoring sight.

How much freedom do we have to run rampant in the background of your story? Like, I understand that these are tertiary characters and have will not likely have much impact on your overall story, but obviously there are more forces in play here than just the divine the demonic and the mafia. The poor schmucks stuck in the middle aren’t just all working together, they must have their own interests and enterprises, not to mention that there are often many sub-factions within organized crime. So, returning to the original question: How much freedom do we have here?

Plenty of freedom. If they all just kept to themselves, that would defeat the whole purpose of getting other people’s ideas involved. The ideal result of getting all these other characters is that I’ll be able to create a world that changes and evolves independent of just what the story dictates, rather than just letting my own writing drive the whole thing.

Plenty of freedom. If they all just kept to themselves, that would defeat the whole purpose of getting other people’s ideas involved. The ideal result of getting all these other characters is that I’ll be able to create a world that changes and evolves independent of just what the story dictates, rather than just letting my own writing drive the whole thing.

So, should we be posting things here, or PMing you? Because if we post stuff here tan that kinda spoils any air of mystery that would happen with the introduction of a new character, being that you could just come to this topic and read their entire bio…

It’s your choice to PM or post here. I’d recommend PMing me, although I request the PM topic be the character’s name for clarity. Thank you!

scampers off to the world-building chamber with a grin

This is a really neat and interesting idea.
It’d be cool to create a character for this world…

So is it basically 1 character per person, or can we build more than one (not too many of course)?

I need characters to fill my world. 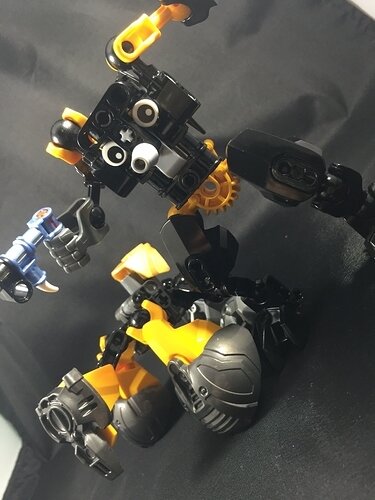 This was…not quite what I was looking for

On the other hand it’s almost too funny to pass up.

Seems very interesting, though I’m still a bit confused of the roles of these characters and a bit of the world itself.

This was…not quite what I was looking for

On the other hand it’s almost too funny to pass up.

If you’ve got any specific questions, by all means ask them. I’d be happy to answer.

As for Goober…I have special plans >:l

4: This is a story independent of any existing universe, so all Toa or Hero characters will be automatically converted to a fitting species within the story.

So we use MOCs as images and stuff?

The last important thing to note is that if this does become a stop-motion series yet again, I will be looking for voice actors and actresses, and this topic may receive updates as the project progresses.

Otherwise its just a normal text story right? If thats so how do the tertiary characters come to play?
I can always Try to voice act if you need it, I have a decent mic.

Indeed. MOCs are the standard format I use but if you have a drawn image that you consider more accurate I’d take that as well.

Regarding the story, teriary characters are still useful. Interactions both between the main cast and the secondary/tertiary cast, and between the teriary cast themselves are not going to be uncommon. Even just having a face, name, and character for that guy who sits in the corner at the bar goes a long way towards world building.