If Ekimu is able to be woken up, then Makuta must be able to as well. (Perhaps Umarak might want to wake up Makuta) and once Makuta wakes up, he will probably want to kill Ekimu.

So either we’re gonna see Ekimu vs Makuta, or an emotional death scene that resembles the one in Star Wars episode 7.

or an emotional death scene that resembles the one in Star Wars episode 7.

we don’t talk about that

we talk about Matoro instead

If that did happen, kudos to LEGO for not completely targeting the 6-10 year old focus group.

How about he gets severely crippled by the destroyer, rendering him unable to fight and interfere with the Toa’s missions but still be able to offer wisdom and advice when the Toa need it (because lets face it, they’re bumbling idiots without him).

Since Ekimu is the narrator in the website chapters, he seems to be the only one who is able to effectively communicate the history, legends, and other background information that may be crucial to the plot. Unless another historian figure/chronicler comes in, I don’t think Ekimu’s going anywhere…plus he was the iconic face of Bionicle since the beginning of G2…

Ekimu’s dad comes in, kills him, dons the MoCr, and joins Maskuta.

Plot twist Ekimu is already dead and becomes a ghost next wave; which is why he his almost completely trans.

I could see him dying or do what Rockho said, him being crippled 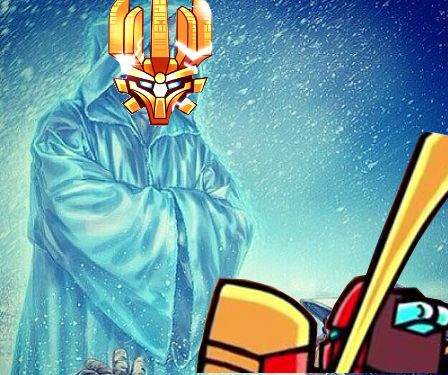 I dunno 'bout you but I kinda wanted to learn about that from the movie itself.

I think it would probably be a sacrifice akin to Matoro or Garmadon, but, honestly, I don’t think it would happen. If Ekimu’s the one creating the Toa’s new masks and armour, then we would have more stupid coincidental deus ex machina transformations a la the Toa Nuva’s initial upgrade.

It’s possible, and depending on how it’s handled I think it could work. Ghost Ekimu giving the Toa a drive to complete their destiney in the final battle would be so great.

I cannot tell you how sick I am of that excuse.

My prominent example being Ninjago, death is not unknown to young children. Ninjago, Chima, and Nexo Knights all have the same age group as Bionicle, and let’s make a list:

Ninjago: Pythor and Wu swallowed by Devourer, believed dead, but apparently alive. Zane sacrifices himself, followed by a heartwrenching funeral, but is later rebuilt. Nya dies in Jay’s arms, later brought back in time and revived.

Chima: Outland Tribes get trapped in a cave, later frozen. Ice Clans frozen and left to decay for a thousand years. ShadowWind used Golden Chi to sacrifice himself, later comes back (I think, I still haven’t gotten to the Fire vs Ice season)

Plus, the Skull Villains in Bionicle were corpses reanimated by Makuta’s energy, and the Toa nearly died due to losing their masks in the Kulta-Ekimu battle.

So, death is very much so possible for Ekimu, and I somewhat support it, but I wouldn’t be that mad if he lives.

Ninjago: Pythor and Wu swallowed by Devourer, believed dead, but apparently alive. Zane sacrifices himself, followed by a heartwrenching funeral, but is later rebuilt. Nya dies in Jay’s arms, later brought back in time and revived

This is the problem I have with the “there is death in Ninjago” claim. LEGO find it literally impossible to actually kill off a character and have them stay dead, so much so that any death is meaningless because you know it will be reversed.

Hopefully this doesn’t happen with G2, but I’m not holding my breath…

He probably will end up dying, only for the Toa to find some Deus Ex Machina to bring him back to life. and for those of you who think this is ludicrous, just ask Mata Nui.

Plot twist: Ekimu was created by the Mask of Life