Dentar, Lord of the Urapun

Well only starter this two and a half years ago and finished it two years ago. Yeah been sitting around before I actually got around to taking pictures. 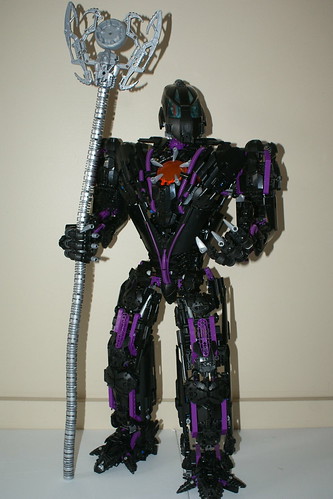 He by no means is perfect as he has a lot of gaps, proportions are a little weird, back isn’t cover up and he has some stability issues (but not many). However I am very happy how it turned out as I had not attempted to create a MOC this large since 2008 with on old OLD creation. 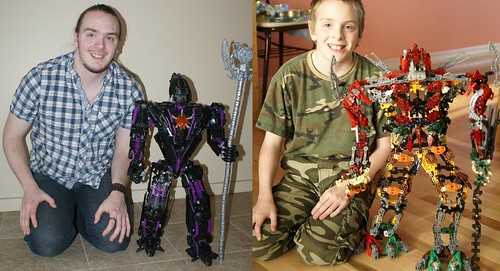 Dentar was an extremely talented Makuta with his abilities to create intelligent rahi. He also hated toa, more so than the average toa believing them to be inferior and that the Makuta species should be the protectors of the matoran. So he rebelled against the rest of the Makuta to work on creating a species that could kill toa with ease. He set up his laboratory at the bottom of the Universe on a small island called Mutani Nui as to not draw the attention of the others. Over the course of a couple thousand years he perfected his creations of a sentient species that would rival a toa in a one on one match. The Urapun. Unfortunetly before he had a chance to put his plan into action he was destroyed by the Great Beings which left only a giant crater where all evidence of him was gone. The Urapun survived alone on the island with no idea of their true purpose.

Huh, at first I was like “those are some interesting custom pieces on top of the staff”. Then I realized those are Zadakh staffs. That made me realize the sheer size of this guy. And given the size he looks realy good. Just a bit unfortunate that the staff’s handle isn’t straight.

Also never thought I’d ever see any of the playset mask parts used on a Bionicle MOC.

Seeing this also triggers some fond memories of me trying to build a giant Bionicle MOC back in… 2002 or 2003. Never got beyond the feet, though.

That is one big boi. I’ve always been awful at making large MOCs so this is just mindblowing to me.

This is so incredible. I first thought you just used a Hahli mask, but then I realized it’s from the Toa Terrain crawler! This is so well made that you don’t even see how big it is from the first glance!

It’s two feet two inches. When I was building him I made sure he was al least two feet tall. Glad he got a bit taller.

Thanks for the nice words means a lot.

I did want to take this time to address the staff. It’s crocked because there is a coat hanger wire used to keep it from flopping all over the place as pins and axles just didn’t cut it and I just didn’t have the time or patients to get it any straighter.

It reminds me of the time my brother attempted to build a huge Titan, but he used up all our pieces on its feet and legs, it’d have been bigger than this if he’d done it

Nice. I will admit I have plans that someday in the future to make him bigger. Well if I ever get the parts, time and the courage to tare this one down.

Torso is a bit short, but overall great job

Thanks! Yeah the proportions are a little off. Really is one thing I wish I had taken a little more time one.