Some recent attempts at digital coloring, utilizing characters from the two ends of my story spectrum, Judah Alisdair and Mara Alisaedra. Judah Alisdair is a lion-leopard mix, and is a member of the King’s Rangers, a company of bounty hunters that keep the peace in the lawless desert frontiers.
Mara Alisaedra is his ancestor from 600 years earlier in the storyline.

I’m not too happy with the shading on the Judah. Something about it just looks…off. 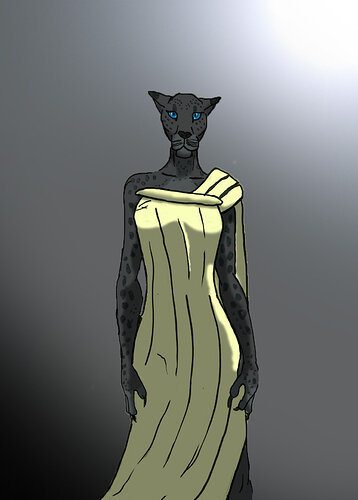 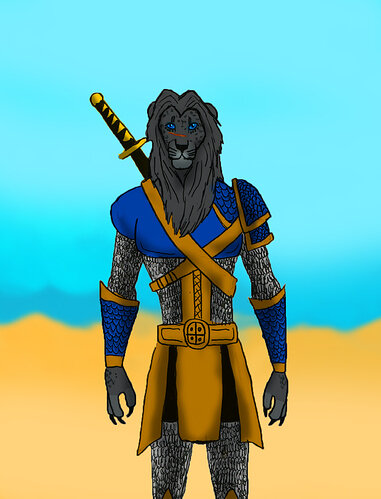 Looks really good!
I agree about Judah, the shading could be a little better.

Really nice! If I were to make a suggestion (now take this with a grain of salt, I’m not a pro by any stretch of the imagination) it would be to make certain deeper parts of the shadows even darker, and add some higlights to the bright areas. And maybe make the shading lines a bit smoother and more defined. Keep up the good work!

This is a really good start!

I think the shading is definitely what needs worked on the most. In the first image there’s a very clear light source, which is good, but some of the light doesn’t make sense. For example, the arm on our left has heavy lighting on its left side, but the light is coming from the top right. There’s also no indications of rim light, so it doesn’t make sense to be lit on that side. Other than perhaps some more light falling on the dress, the rest of it is in line.

I think the reason the second one doesn’t look right is because the shading on this one doesn’t really have a purpose. For starters, there doesn’t seem to be a clearly defined light source or direction. Because of that, it looks like all the shading is toward the center of his body, on the edges of all the shapes. The waist armor is where this is most apparent. The center piece has shading on all its edges, and the two outside ones have light on the outside edge. If you want to fix it, it would be good to choose a direction for the light and focus on making only the edges that would face that light be illuminated.

Just some general tips and tricks for shading: