Does Lego just not care about Bionicle?

Well now we know why lego doesn’t want to bring bionicle back. They just want to protect their fans.

It doesn’t matter if Bionicle is dead, because You are Bionicle.

I will die anyway, someday after the cancelation of G2…

The whole 90th anniversary thing for me was a roller coaster ride of emotions. At first I thought awesome we are going get a cool bionicle set like matanui robot or something. But then it also made me aware of a lot of hatred towards bionicle. Which I knew existed but didn’t think it was as bad as what I was seeing. Which was basically a bunch of people having a temper tantrum over bionicle getting the most votes. So then I just wanted the 90 th anniversary set to be bionicle to stick it to those haters. Then with the weird way lego handled the votes I began to see that clearly bionicle doesn’t have a chance when it’s own creator is trying to to forget about it. And sure Lego is a company at the end of the day and they want to make what sells. But why they couldn’t just make all four of the final themes sets and make more money from everyone I don’t know. But all I can say to that is they won’t be getting my money now.

Technic itself is a pretty successful non brick theme so why can’t Lego do the same with Bionicle?

Lego’s issue with Bionicle (and constraction in general) isn’t that it’s “non-bricks”. The issue is that it is a fairly unique construction system.

Technic parts in general are fairly generic, with a ton of reuse value; a lot, if not a majority, of non-Technic Lego sets today still use some degree of Technic, whether it’s to provide structural support for a large model, transmit power for a gear function, or even just provide a simple pivot.

Constraction parts, on the other hand, can really only be used for constraction figures. While there are exceptions to this , and constraction parts sometimes find their way into System builds (I particularly like the use of Hero Factory fists on Set 10246, Detective’s Office), it’s not nearly as generic (and resuable) of a system as Technic.

IMO it would absolutely be!

It could appeal to both old and new fans while striving the theme back to its roots.

It would please the hard-school G1 fans who disliked CCBS, while it could grab the newcomer’s interest with its unique style and aesthetics.

However, a hand full of specialized molds would still be required on the sets since some parts on the figures would be almost impossible to make with pre-existing pieces. (Such as the heads, feet, and hands/fists…)

Are there more than two Tarakava variants that were sold? I know of the green and mata blue versions, but not the teal one.

There is no mata green one actually

There was an unrealased yellow one called the sand tarakava, though 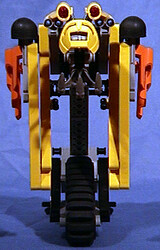 [Correction: 5 sand tarakavas were given away, but were not widely sold]

Check the instruction book of the Tarakava set. It shows an ad in the back of two kids battling with Tarakava. One Tarakava is the Mata blue one from the set, the other is Mata green, with a Mata green Kakama on its face. 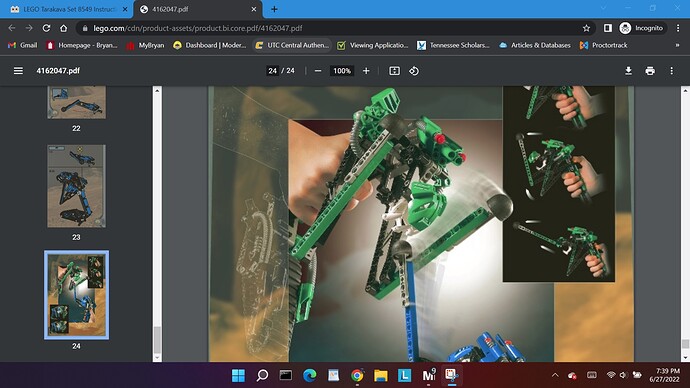 How difficult would it be to recreate the Sand Tarakava with existing parts?

Also is it even possible to build a mata green one?

Edit: nope, the wheel used for the tread doesn’t come in green

Actually, looking at it now, that might be a prototype they used on that picture. On the instructions for the set, the teal tarakava was obviously teal. Yet it is very much a darker green color in this picture. So, they may have used an unreleased prototype in the picture.

Also, the Mata green Tarakava exists in the Masks of Power game, though that may just be for the purpose of balancing enemies in the game.

How difficult would it be to recreate the Sand Tarakava with existing parts?

The model has one grey Onua Claw, which was never officially released. Besides that, its entirely buildable!

In fact, Eljay built it a few years back: 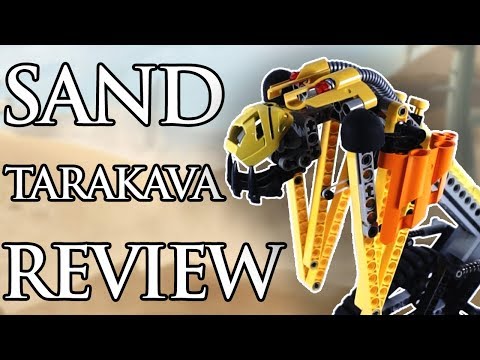 Yeah, that’s along the lines of what I was thinking, just more humanoid.

The model has one grey Onua Claw, which was never officially released. Besides that, its entirely buildable!

Obviously the mask was never released either. It would also seem that, according to the images in this article, the actual hubs are built differently from how Eljay did it: 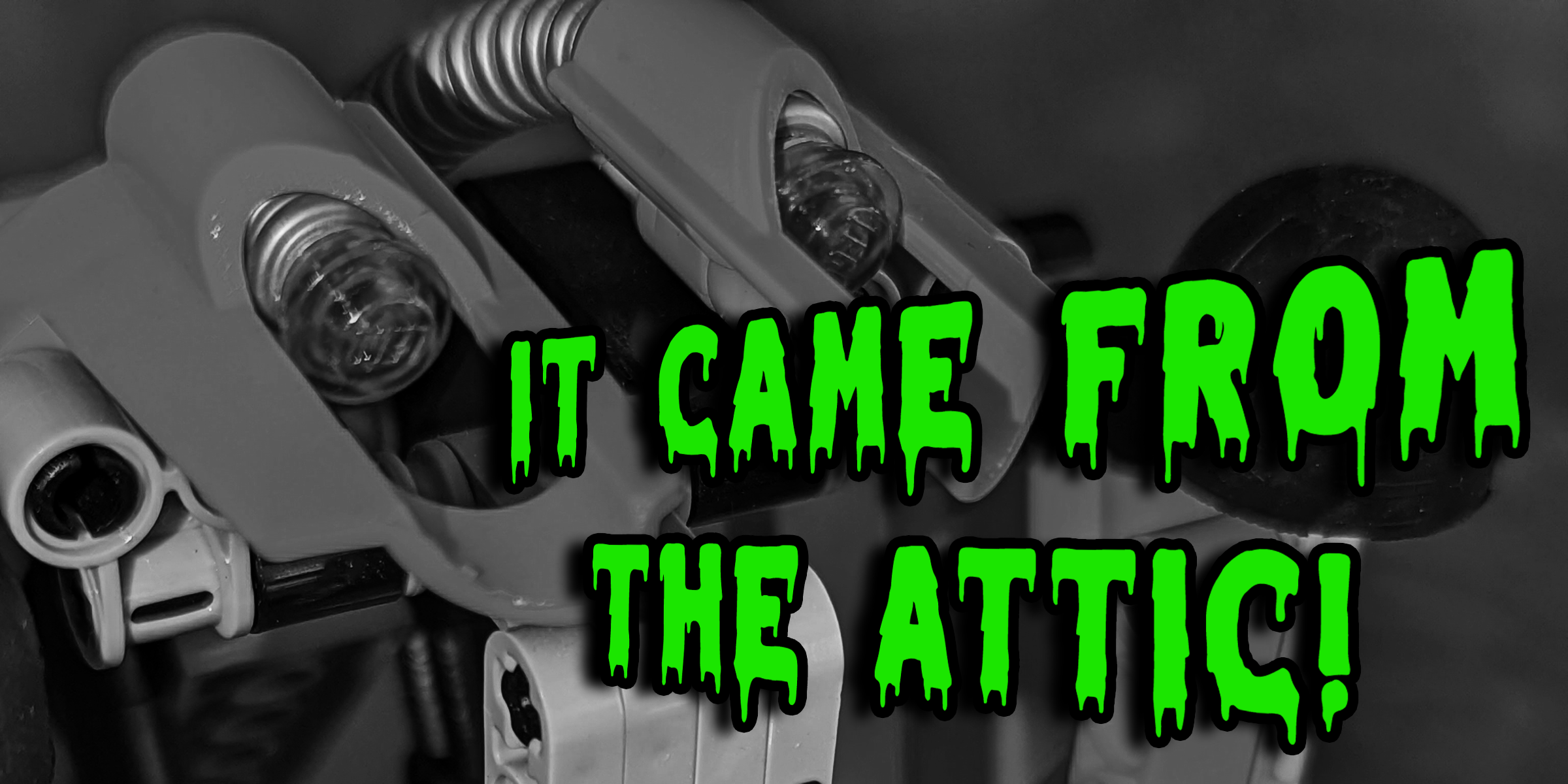 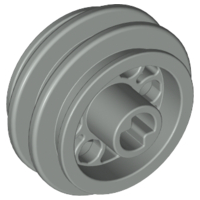 I suspect that using these hubs would fix the issue that @Eljay mentioned in his video, about the tread moving from side to side.

Bionicle fans, in a general sense, may be a little too spoiled rotten to deserve a new iteration of Bionicle.

While I agree with this statement, I would argue that if Lego were ever to consider making an official 3rd generation, they should do it primarily to attract new fans to the theme and not to please G1 fans.

Something to note is that lego doesn’t give attention to most retired original themes other than the huge generic themes like space and castle. To my knowledge, there’s been little mention of fan favorites like power Miners, Chima, Alpha Team, Exo-Force, Mars Mission, space/castle subthemes, etc…

True, but those themes have never had the sophisticated media and widely branching underlying content (especially story) that Bionicle or even Hero Factory had.

Don’t get me wrong, I love many of these lines to this day (most notably Exoforce), but the fact is that most of them were simple and one-note sub-themes with lots of memorable sets but not much else.

Fan communities, even for “dead” franchises, can and do exist. And they can exist without the direct support of the original IP holder.

If the fan base is big enough, as it was in Star Trek’s and Transformers’s case, then yeah, sure.
Unfortunately, Bionicle doesn’t have the luxury of being such a cultic brand or pop-cultural phenomenon, like the two aforementiened ones, to be kept alive by just fan-made content.
It is and always was a niche theme that was only interested by a handful of fans within the whole consumer base of Lego. But since then, it got even worse, thanks to the disappointment caused by the failure of G2 coupled with the complete cancelation of the whole constraction line, resulting in many people leaving the community or stopping caring about Bonkle altogether.

The sad fact is that fans, in general, constantly desire new & official content that they can invest in themselves. If those aren’t available anymore, they start to lose interest gradually, and after a while, they’ll move away from the given brand or franchise to something else that might offer all the things they demand.

I would argue that if Lego were ever to consider making an official 3rd generation, they should do it primarily to attract new fans to the theme and not to please G1 fans.

I totally agree. As a 22 year fan, I’d love a little consideration thrown my way, but at the end of the day it’s the new generation of kids that is best suited to move this forward, as you say. I’d just be grateful for the invite, and I think that’s the attitude us old-timers should bring to the table. No accusations here, just a general viewpoint.

I would also add that I think, if they did do G3, they should make some of them, well… girly. And even more so, a bit less gender specific. Not that anyone was ever really barred from Bionicle, but the equation “Robot + Fight = Boys” was certainly prevalent back then, and Lego Friends has proven that this medium can lend itself to a broader audience. I think Bionicle can do that too, and it would be good of Lego to more actively invite other demographics. Might even be good for them, not bottlenecking the IP through a gradually fading stereotype. The social climate has changed, after all.

Not to be rude, but I think adding many new characters in that way could also turn away many traditional-minded fans. Not that I would care. I’d still buy the sets. But still, in each theme where LEGO added new female characters, many of them were made almost more stereotypical than the male characters, which is why Friends is (probably) more popular with girls than Ninjago or City. At least City is easily compatible with Friends, due to their similar building styles.

Not to be rude

You’re all good, man. I see your points, too. I wanna deep dive into this but I’m worried I’m taking us off the subject a bit

I think that makes the most sense because it looks so clearly mata green. Plus, the little pieces that you push on for the punching function look orange instead of yellow.

What’s really weird is that the same picture is at the end of the other instruction book, but the tarakava is turquoise-ish instead of green. It’s still not quite the right color though. I wonder if the printed copies have the same difference, or it’s just like that in the scans on the lego website.