A hero of a bygone era, still fighting a crusade against enemies long since extinct by his own hand. 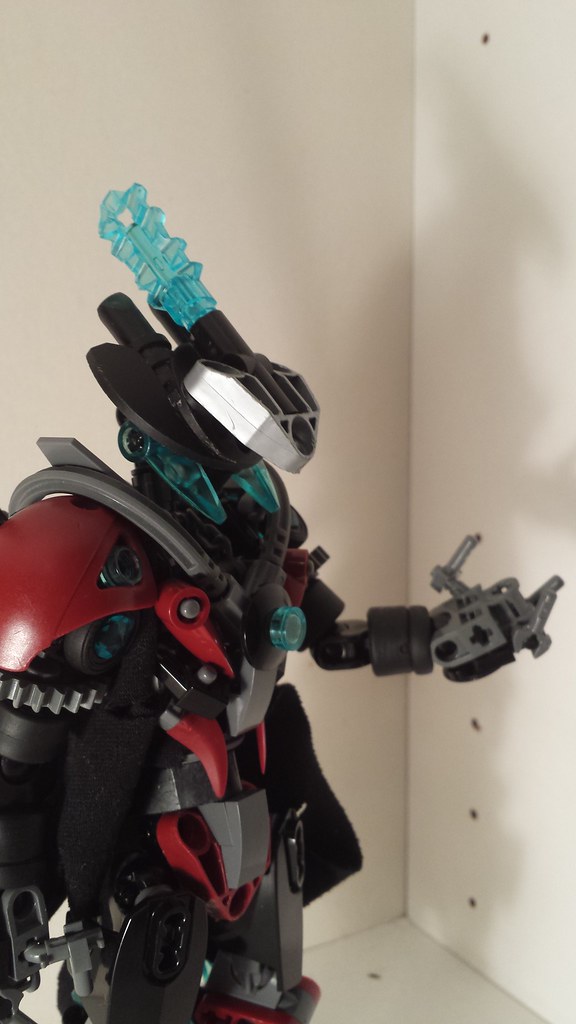 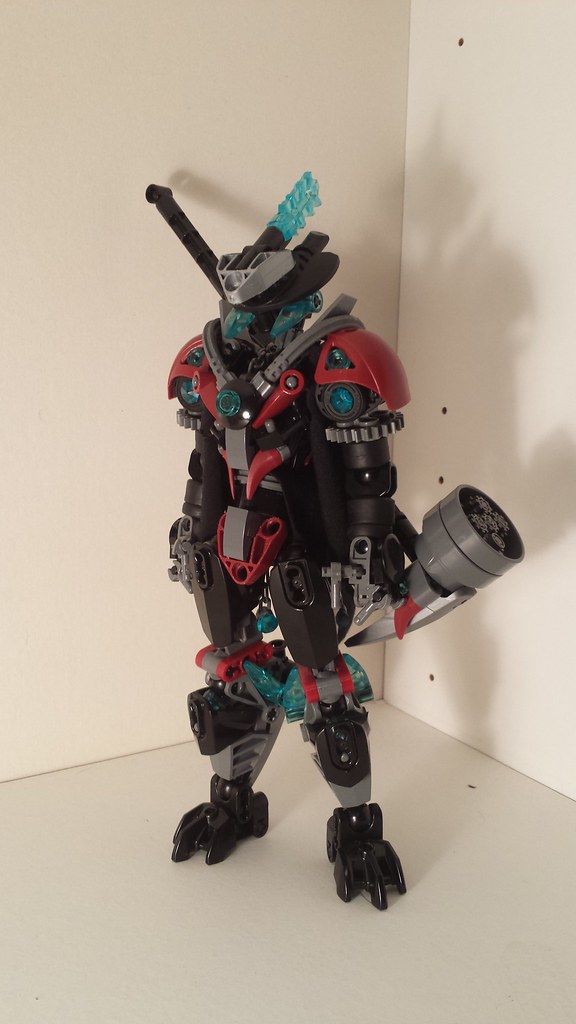 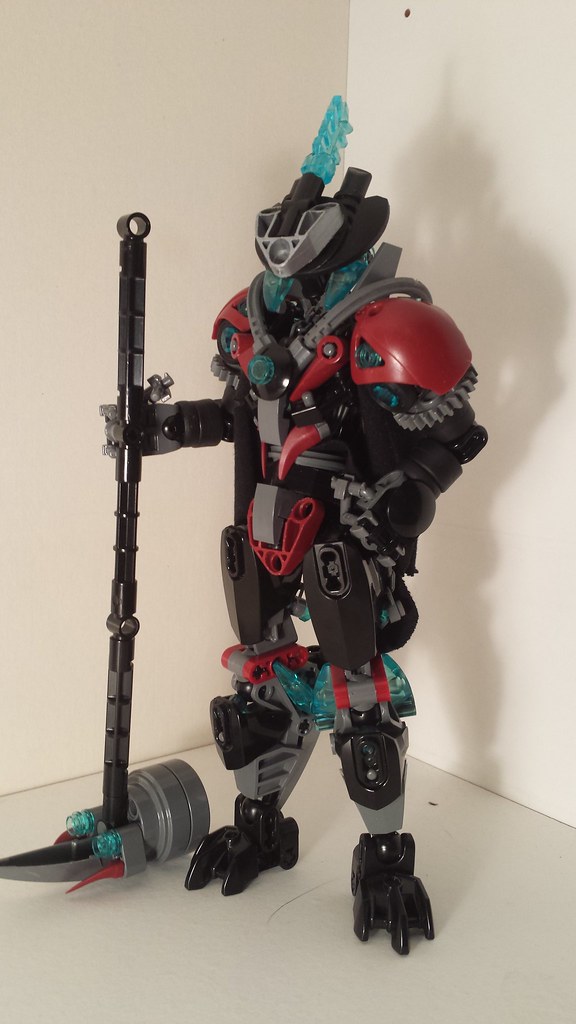 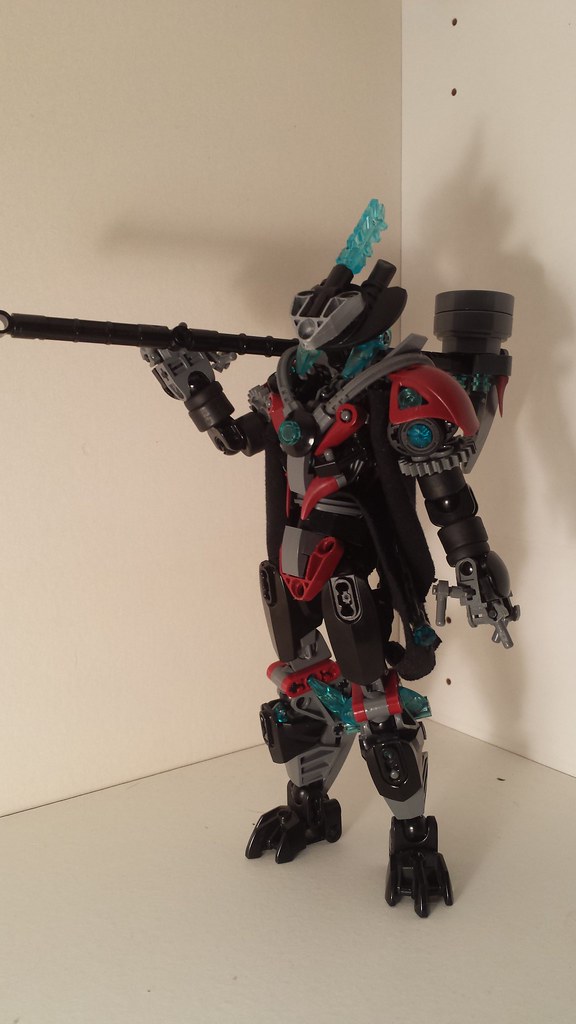 The classic over the shoulder weapon pose. 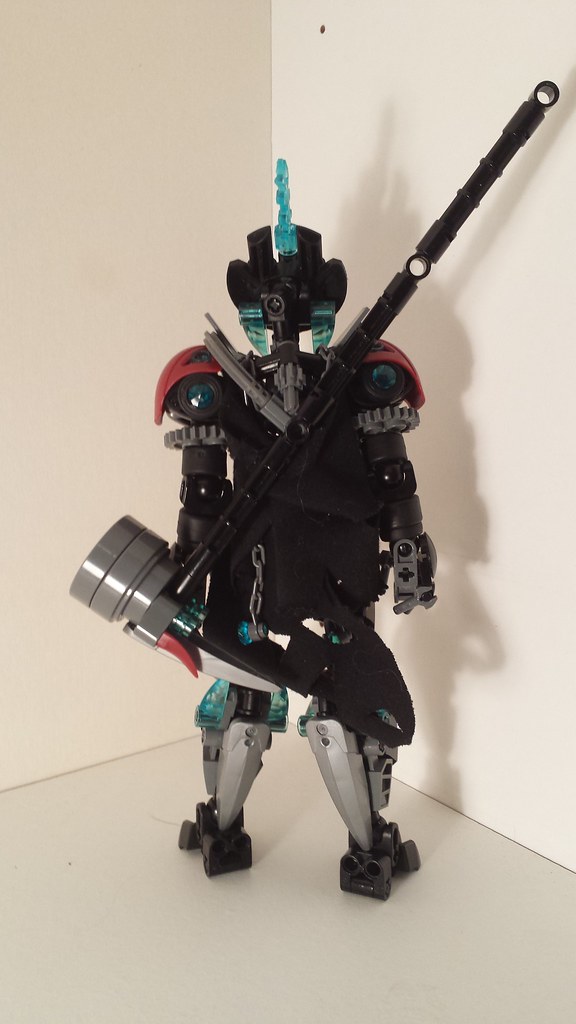 Nyran shot. Sorry, back shot. Nyran shot? I’m not even sure if that injoke is relevant at this point 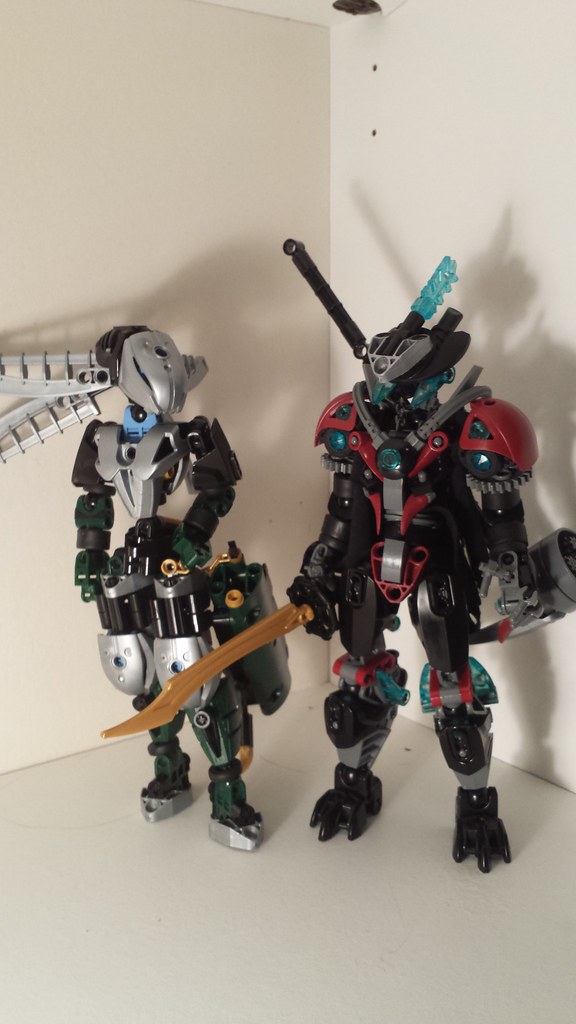 With thicc ninja lady Aurai. Pretty much here because Aurai was the spinoff of Rai. Who was also a Self-MOC at one point.

“You and I, we aren’t so very different after all, are we?”

Ekorak returns. It’s been…what, two years since his last true version, and the old MOC Spotlight of him?

He’s come a long way - and he’s a lot different than he’s ever been before.

I don’t really know what else to say at this point. Six months and a MOCblock later, he’s done.

Now I can finally move on to other MOCs

Semester’s over. I’m back in the game. I’ll see you soon!

I like the contrast between black red & trans blue.

I’d be curious to what he would look like if the head were posed straight.

I’d be curious to what he would look like if the head were posed straight.

It’s not pretty, I’ll tell you that. The angled down Va head has been his signature design for quite some time now, so I pulled feedback from the old versions and modified his neck design to better allow for the downward angle. The side effect of this is that posing his head straight means his head is an extra joint forward, and just looks plain awkward.

Wow, he certainly has changed. The decision to add crimson red and swap out the trans-red for trans-blue is a choice I’m all in favor of. The colors contrast each other nicely and are laid out well.

As for the design itself, while I did enjoy the unique stature Shadowgear’s torso gave him, this new one works just as fine. The Bohrok eyes, tubing, and other little details really add some great shaping to the finished result. The limbs are a much needed improvement over the old ones, feeling a lot more cohesive in relation with the body. The way those tire pieces mirror the chest light in shape also provides good consistency in aesthetics.

Overall I’m glad to see how far Ekorak has come.

@Stoax
Glad to hear it. It’s a pretty drastic change but so far nobody seems to disagree with the choice.

Oh man I remember that torso.
Love the MOC, it’s greebly without passing over into mess territory.
Part of me misses the old white and black (and later purple IIRC) colour scheme, but I also really like the new colours.
the blue really pops and the grey and red blend really well.

The hands are the only thing that really don’t feel right compared to the rest of the MOC. To me, at least.
But on the I love how this looks. Excellent job overall.

Also yes, purple was added to the color scheme pretty quickly after the original photo set was taken. It suited him quite well, but times change, I guess.

@AdamusTheFirst
The hands are a little off to me as well, but I don’t know what to do about it. Due to my signature pose, all versions of Ek need fingers, and this is the only way to implement them without giving him extremely oversized hands or simply no fingers at all.

In the… er cult

Ah! Such memories! Such a good looking guy!

Yo trans blue and dark red look amazing together. Looks lit my dude

@Jayfa
I’m quite fond of the colorset myself. A pretty drastic change from the days of old, but I think it works out for the better this time.

Dang he sure has changed

He looks really neat, don’t have any complaints tbh

What’s this? Ek posted a MOC? Repent, everybody!

His face really don’t look like it should be on that build of that body. aside from that it’s real nice.

He’s always had the Bohrok Va head, I didn’t wanna change it now. Canotically he’s just wearing the helmet he’s had for a long time, but that’s moreso a story explanation as to why I chose to keep the signature design over a custom one.

Sorry I just got started here and really I haven’t even had a chance to look at those previous versions. And If I wanted to be truly constructive; if some one has to rely on an outside source to understand some thing then it doesn’t matter if it is film or a M.O.C. Like The Dark Chrystal (a film everyone would watch in my opinion).