Guess that’s his contracter then

Do you have a name for the demon of trickery?

Azhemekt? (Name off the top of my head)

I think I should do something relating to the prophecy soon. However I also want to see where these player-driven stories will go…

Name: Kahoran Tyrona
Alliegance: None.
Race: Dragonborn
Appearance: Short, stout, with thick muscles and a short snout. His eyes are a bright neon red. His scales are a very pale ice blue. He wears a cadet blue cloak with a hood, and wears very dark earth blue leather armor, with chain metal cuffs on his neck, wrists, and ankles.
Magic Source: Natural.
Contractor: Iaha, Goddess of the night
Magic Abilities: Kahoran can increase the intensities of the shadows, making them darker and colder. He is also much more powerful during nighttime and in shadow, gaining extra speed, strength, intelligence, and heightened senses. The fuller the moon, the more powerful he becomes.
Abilities and Equipment: Natural resistance to cold. He wields two light swords and a large halberd, as well as strong mini-shields on each of his forearms (like Cap from infinity war.)
Bio: His parents were murdered by assassins, for some unknown reason. His parents died when Kahuna was very young, and he has been on his own for most of his life. As such, he feels very little emotion and has no sympathy for others. He roams the world, searching for the assassins and secretly helping those who need it.

ooc:
I was thinking that the assassins would be minions sent by Dum to kill Kahuna’s parents, who were wealthy traders in the town of Pormalion.
Also, if anybody has a female character who could knock some feeling into Kahuna, then I have a few ideas for a good arc.

There will be a female character soon, though I’m honestly still writing her up.

Also the character checks out, accepted! 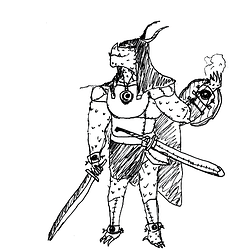 And here’s a complementary sketch

Sorry I haven’t been as active, tomorrow I’ll be working on any needed replies and might be adding a new character to the mix.

'Cause every little thing

(Soft whistling) Gonna try and post here more, sorry I haven’t been here for a while

Alright so I’m going to be watching a neighbor’s dog for a bit, like an hour or two at most, so I’ll reply then and hopefully finish a character sheet for a new character that I plan to play.

Name: Aru Durall
Race: Human
Appearance: Aru is a 5’ 4” tall human. She appears to be in her late teens. Aru has yellow golden eyes and smooth scarlet hair. She bears a red cloak, and a simple brown and white dress.
Magic: Natural
Magic Abilities: Aru can heal injuries, nearly any if she gets to the injury two hours after it was made. If she is too late the injury cannot be healed by her magic. Her magic appears like a warm white aura, that blankets the injury, when in the process of healing it. She can also communicate with animals, it was a magic that a friend taught her.
Abilities and Equipment: Aru carries a medicinal bag, where she keeps medicines and medicinal herbs, that she uses to help heal an injury. She has a small money pouch, where she keeps a few coins on hand.
Bio: Aru is from the forests just south of Pormalion. She grew up with her mother, leaning all about the plants and animals in the forest. After she got to the age of seventeen she decided it was time that she sees what the world has to offer, even against what her mother had told her about the world. Aru took her bag and left for Pormalion hoping to find and learn about the history of this port city. Her personal goal is to help anyone that is injured, no matter who they are/were. she felt that her mother was slightly overprotective, but with this world of magic, perhaps her mother was correct.

that moment when you almost forget you’re the GM and your character is already accepted b/c of that.

Aru Durall - made with Hero Forge

Just letting y’all know that I’ve reworked the Prophecy for End of Aura. Didn’t really like the original one.

So here it is:

Know your final days are coming. Beware the goddess in red cloak, from hence She is your final warning. The revenge of the demons is at hand and they end the mortal realm. There shall be signs set to you. Signs in the stars, tremors in the ground. The sky shall erupt into a great flame. For the final war between the gods and the demons will begin. Beware that goddess in red and know your time is near…

it shouldn’t be too different from the original, although hopefully this one is more clear and just a bit better.