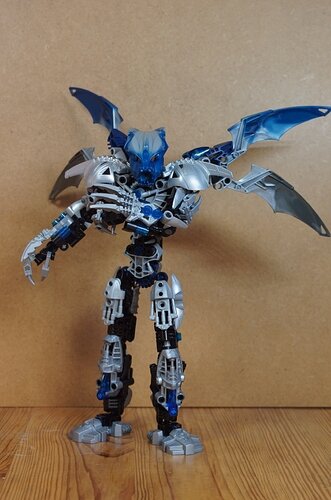 Furtaan was one of the Makuta most devoted to the Brotherhood and its purpose. While he wasn’t as drastic in his beliefs as Reppirax, Furtaan nonetheless saw the relation between Mata Nui and the Brotherhood as a promise that had been given – a promise he meant to keep no matter what. Especially the protection of the universe mattered to him, something which in his eyes justified even the most radical measures to ensure it.
Miserix appreciated Furtaan’s dedication and opinions – especially since Furtaan could be counted on to never do anything without Miserix’s consent. This earned Furtaan considerable trust and favor from the Brotherhood’s leader and made him one of Miserix’s closest advisers – second only to Teridax.
Eventually Furtaan was granted the position and title of Judicial Vicar and the task to have an eye on any suspicious developments within the ranks of the Brotherhood – Makuta working on dangerous experiments without permission, spies in the ever growing amount of servants and mercenaries the Brotherhood recruited, etc… Since Furtaan believed that if the Makuta kept to the rules their subordinates would, too, he mainly focused on his brethren in his regular – and irregular – inspections of their labs and notes. Something that quickly made him extremely unpopular amongst his brethren, since he did not only disturb their work but also was thorough and diligent and thus usually found out a lot of things he wasn’t supposed to – going straight to Miserix with them.
Furtaan also had his doubts that Teridax’s slate was completely clean, but the latter was too smart to ever let Furtaan get wind of anything he planned.

When word of the Barraki’s plan reached the Brotherhood, it was Furtaan who first demanded military action. He was furious when Teridax was granted command of the army and not him, but in the end accepted Miserix’s decision and fought in the battle under Teridax.
Later he grudgingly admitted that Teridax’s “solution” to the Matoran Civil War in Metru Nui had been appropriate. Furtaan subsequently got assigned to the island of Cajin.

At the Convocation Furtaan was one of the few to immediately join Miserix’s side. While he saw the potential advantage in taking control of the Matoran Universe to ensure its safety, he absolutely refused to plot against Mata Nui. Only when it became clear that Teridax had won did he change sides, although he realized that he’d have to go into exile for supporting Miserix or he’d be imprisoned or worse as a danger to Teridax’s Plan.
On his way south Furtaan ran into Napak, but the other Makuta had no grudge against Furtaan or any of the other exiles and thus told him that Hormahk had already been killed and that Gantil had been assigned a new task – thus freeing the way to the southeast of the universe.
Gorast and Icarax also found Napak, however, and before killing him for treason, got out of him where Furtaan went. They caught up to him on Keetongu’s island and killed the Makuta of Cajin after a short and very one-sided fight. His mask was later mounted on teh wall of the Convocation chamber.

Furtaan wore an Avsa, Great Mask of Hunger. As a weapon he preferred his powers although he also carried two energy claws for the rare occasions in which he was forced to close combat (they didn’t help him much against Gorast and Icarax). 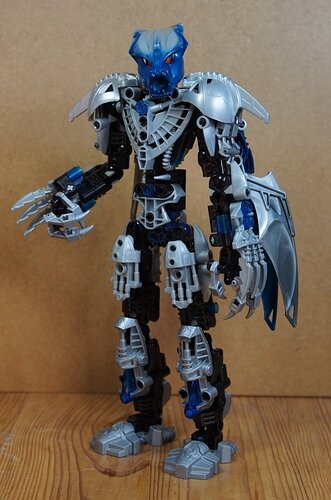 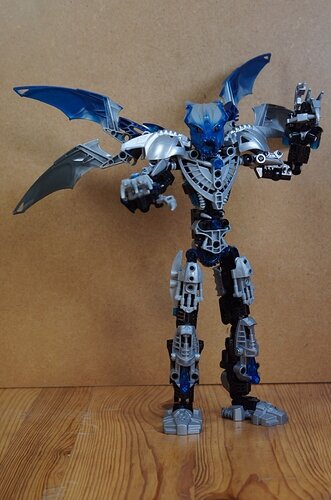 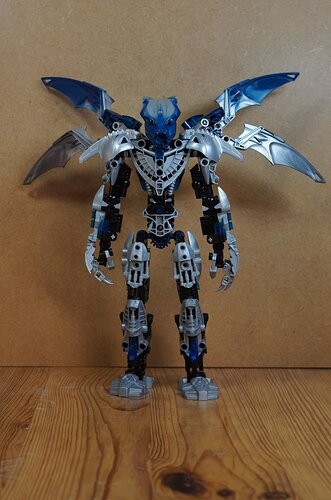 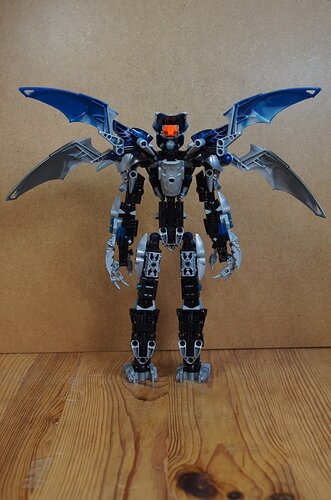 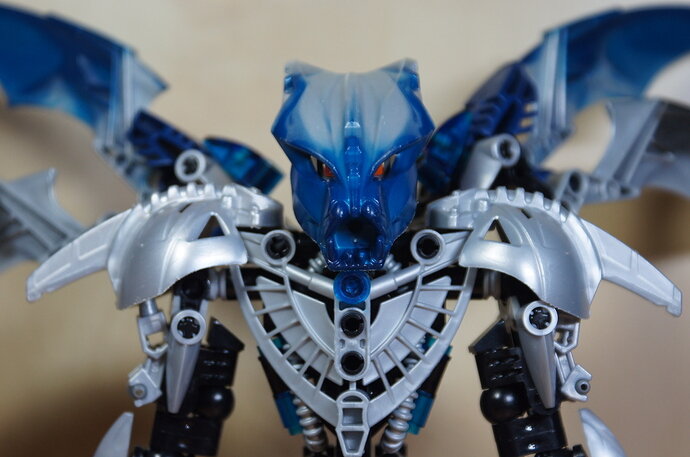 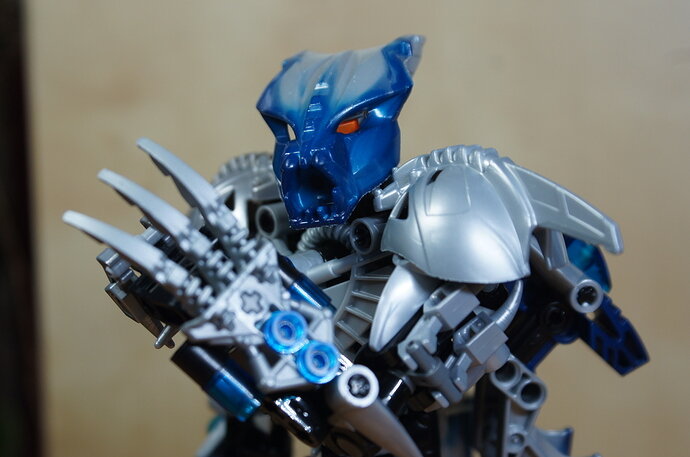 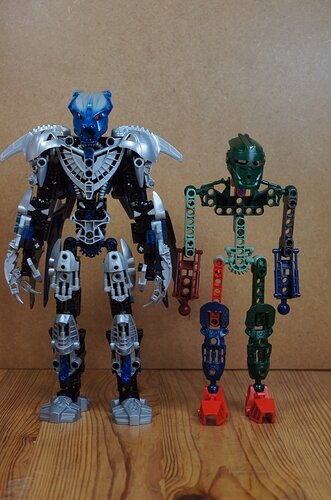 While building this I noticed the lack of small metru blue parts - thus had to use trans dark blue system stuff, but I think it worked. When I first saw the original I thought those Rode shoulders looked weird with their top spikes sticking out so far to the sides - but by now I really like that. It feels very… bionicley. In general I tried to keep pretty close to the original MOC in terms of armoring. Turned out a bit bulkier, but I like it. 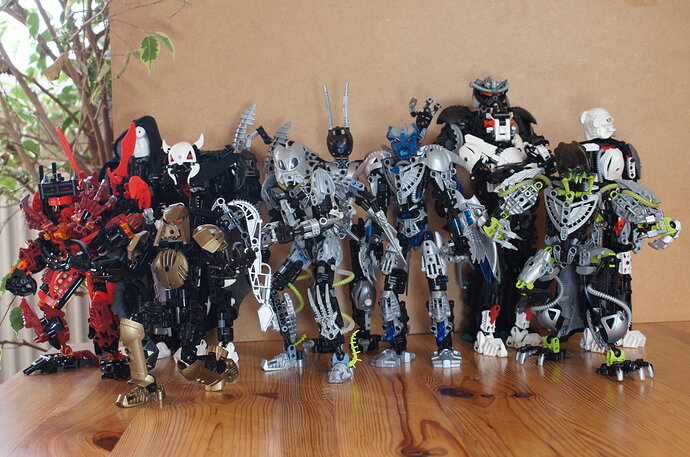 The G1 parts is well put together, a clever use of the Vahki head to connect the wing, and the lower leg seems rather flat on the back.

A small nitpick I have is the wrist looking bare between the claws.

Excellent expansion on his backstory, I must say. The MOC is also well-sculpted. I love the use of the silver teeth pieces to add onto his jagged look.

(Also, just to ask, if you do Tagah, I realized I didn’t add a backstory for him on his topic. Do you want me to do that?)

I didn’t add a backstory for him on his topic

You didn’t? In that case I’d definitely appreciate that. I remember how he dies, but not what else he did.

History: In the core BIONICLE universe, Tagah was a mighty warrior among the Makuta that was loyal to Teridax. He battled many Dark Hunters and grew to be an honor figure in the brotherhood. However, during the Makuta-Barraki war, Tagah was murdered by Pridak when imprisoned, and has since then been viewed as a martyr for the Makuta.

My favorite one so far in my opinion

The 100 are coming together.

Another solid moc. I love his legs, upper and lower, as well ash his lower arms. The shaping on the upper arms is solid as well, however the balljoint doesn’t look good. The wings are also beautifully done, particularly how the phantoka wing rests perfectly upon the vahki “nose”. One last thing I would change is the feet. I feel Metru feet would fit his royal appearance better, and enable a higher range of poseablity at the ankle. All in all, though, well done as usual.

Edit: actually, i think thunder’s silver stars feet would be a good replacement

One last thing I would change is the feet.

Actually another problem with them is that the angle the ball socket connects to them really hinders ankle articulation. Still I wanted to use Hordiak feet since the original used Hordika feet.

So beastly looking. The legs and chest are really well done. And that particular head is such a perfect match for the character.

Fair enough about the Hordika feet. Do you think in time you’ll modify the ankle then?

Probably not - I mean, I like how this currently looks and I don’t really need more poseability.

Giving ankle articulation more room would mean making the bottom of the lower legs thinner - and I don’t think that would look too good. It’s that piece directly below the Metru feet that causes the problem - it wouldn’t be a problem if the ballsockets were angled down, but since they have to be angled forward for Hordiak feet…

can’t believe i’m saying this.
possibly best makuta moc that I have seen on the boards.