(If it’s Ihuian, please tell me, it hurts my head at this point) 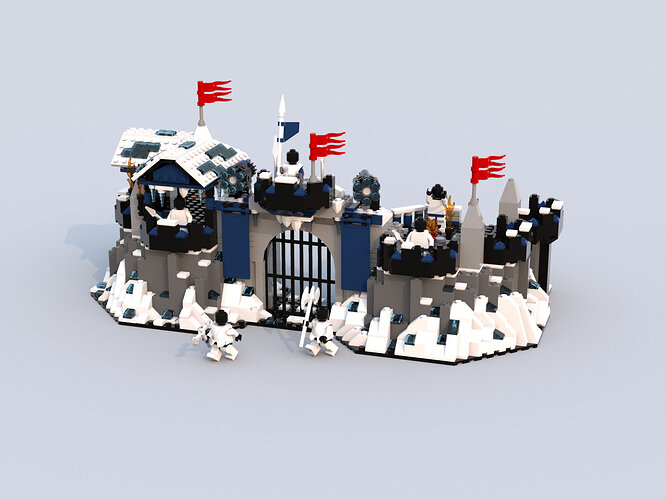 This set contains 1114 pieces, 6 minifigures and 2 Turrets and is meant to be more of a play set, the gate can be locked open, the corner pieces can opent up and the top sections can be removed to see inside. Now whilst it isn’t the largest space to play with, it looks fantastic and would great for worldbuilding playing (is that a thing? It’s like a dollhouse basically, but you know, for ice elemental guards). 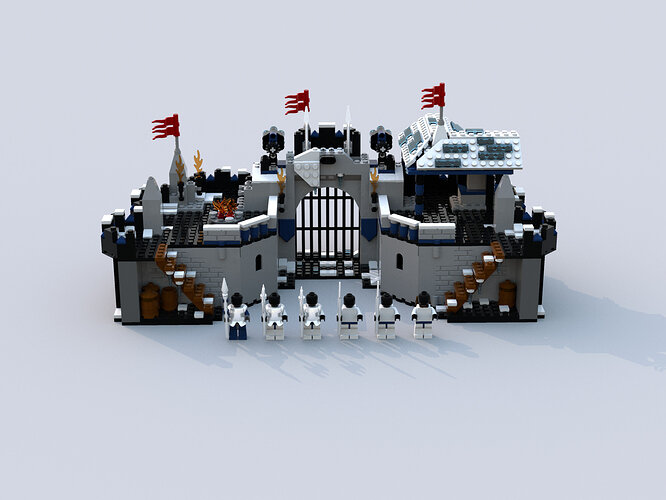 So here we have one Captain of the Guard, 4 Guardsmen and one traveller only just getting through before the portcullis slams shut. The captain has a specific spear and colour scheme that seperates him from his guardsmen, the guard use giant axes or spears. I like the idea that Ihu specializes in pole based weapons, yes they may be good with swords and shields but they can all hit an Ice-beetle at 50 meters with a broom handle.

The guard with the axes are the heavy hitters that repel threats, the guards with the spears are the patrollers of the walls and the Captain it the last stand. The traveller is just catching his breath before running to the nearest city with large walls. 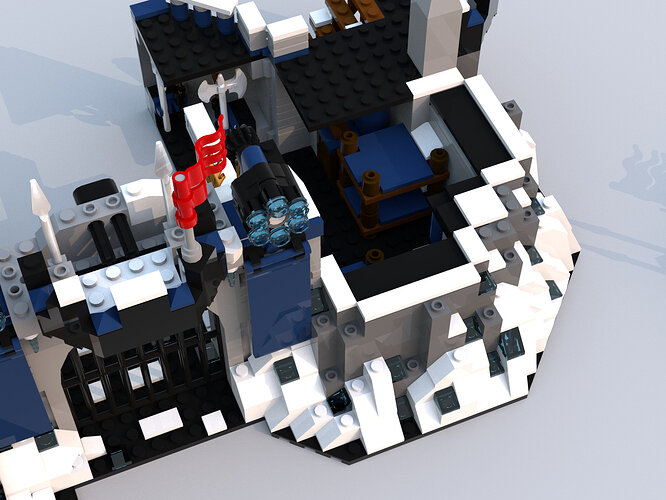 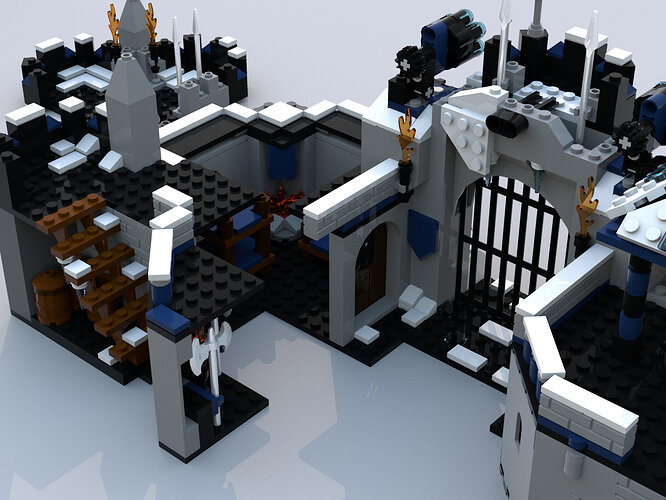 And now the details, here we can see into the guard quarters, there are only 3 beds as one of the guard rotates out to keep the night watch, there is also a stand for weapons where they can put their equipment away before getting warm before a fire. 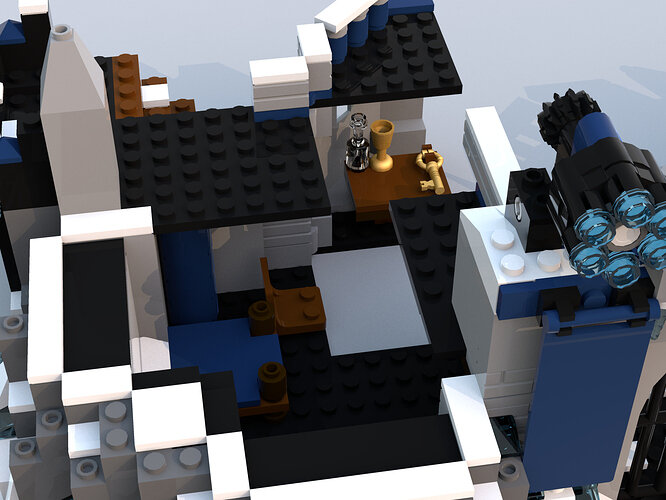 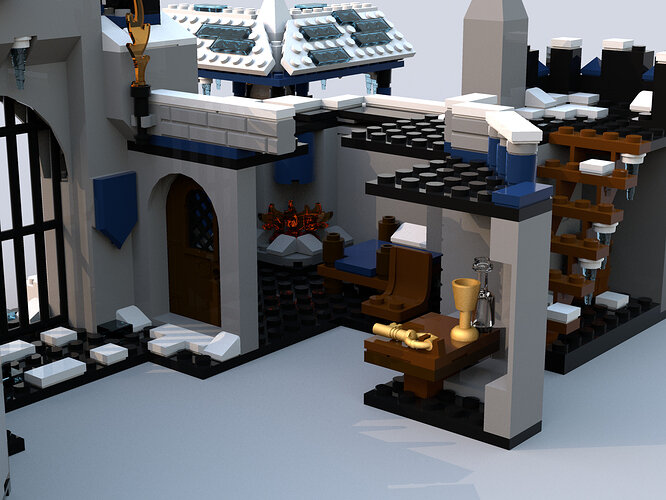 The captain enjoys a larger room for himself (or herself, I’m not picky and I’m not making the characters), with a desk for writing reports, a bottle of water and goblet, ideally there would be stickers for a map or something up in the room breaking up the walls but the best I could do was an axe stand to the left of the fire. 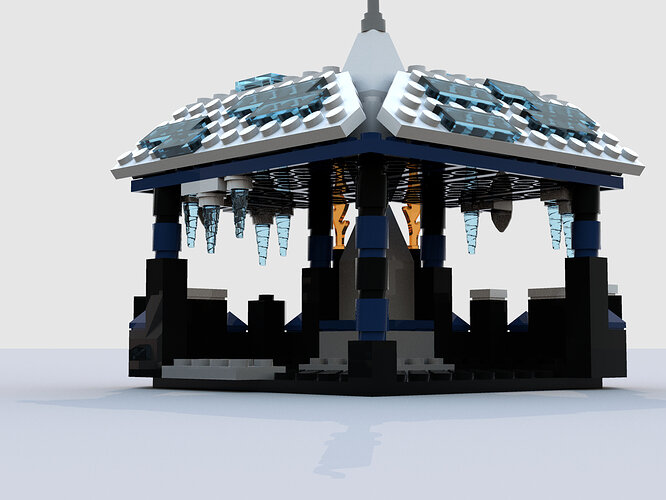 Lastly, the little hut at the top of the right side, this is the sheltered section to be patrolled but it doesn’t have the roaring fire of the left, open side. This render shows off the details of the icicles really well.

Not a lot of in depth concepts here, except maybe the position of the gate itself. Perhaps it is in between two impassible mountains as an entrance to Ihu, making it a vitally important outpost to hold, maybe it was used for trade or perhaps it took assault from the unnamed ice wolves that I need to name at some point.

As always, Comments and Criticisms are welcome

Excellent attention to detail. Everything down to a little snow still stuck in the corners. The barracks are charming and almost believable.
It isn’t over the top, and could definitely pass as a LEGO set. One I’d probably like to buy.

This one has the best balance of detail and low piece count, the Naho bridge has a ton of detail that raises the piece count a fair bit, I was going for charming, thanks

I’m in agreement. I also like the Medieval look, like Knight’s Kingdom had back in the day.

My designs were heavily influenced by knights kingdom, including the old one.

The snowy corners are definitely done very well, and the interior is very much a plus with all of the detail.

The overall architecture probably still needs to be narrowed down before I decide if I have any misgivings, but I almost expect more ice covering the surface, if you understand my meaning.

I didn’t blanket it in ice due to being highly traversed and being close to heat sources.

The little hut looks so good just like the rest of this thing. This is my favorite so far of your sets