Another re-purposed build on my part; this one being the Visorak Battle Ram from G1. Now, I should preface this by emphasizing the concept part; this would ideally be part of a slightly larger set during the Civil War arc, with appropriate figures, and Rahi to pull it.

I have done concepts for Mangaian, Motaran, and Tiroan as well, depending on whether or not such a device would suit them better. 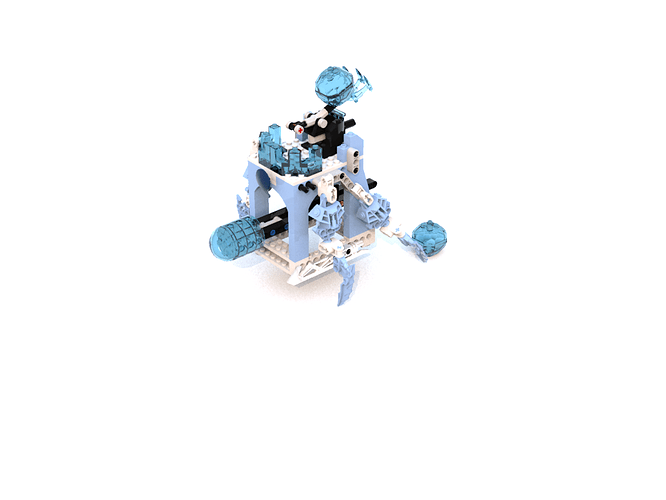 The rubber band that fits on the top catapult (which hurls chunks of ice) isn’t there, but it is a function, as is the movable ice-tipped ram (I take credit only for the ice motif; the functions are all part of the original model, obviously). It also has skis along the base for fast transport within Ihu, while the legs can be used bot for locomotion and anchorage.

Aside from the obvious; the Visorak Battle Ram, this is also quite inspired by Grond from The Lord of the Rings, and hence I think that it would be pulled by a pair of Rahi. The reason that I haven’t included any is that for Ihu, I would assume that based on the current Rahi, it would be pulled by something like a Khorei (unless a Kane-Ra or a Mahi would also live in Ihu), and I’m hesitant to introduce another Rahi species out of my irrational sensibilities regarding how many large species can survive on an island this size.

EDIT: @Kardax’s concept, which packs in the functions while also (if I’ve got this right) being a more compact set overall, in addition to two Koruhi/Kavinika. He’s also got far better skids and armour, and clearly more skills with those chains (I love those icy chains), in addition to a “snowed on” motif up the top (seriously, again, why didn’t I think of that?) 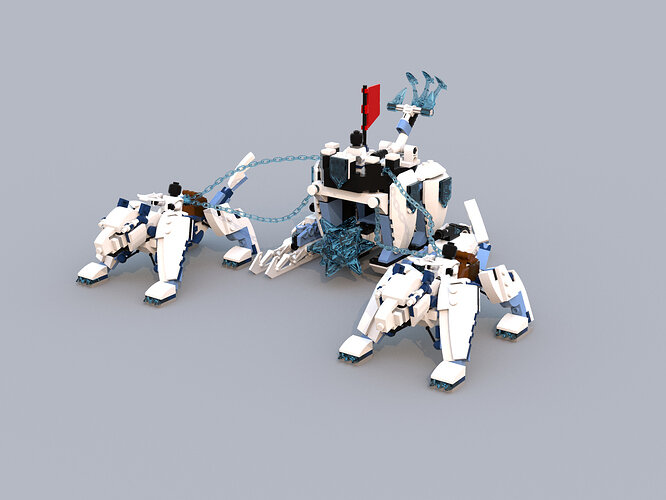 So, yeah. Food for thought.

I think the moc is very conceptual at best (not meant to be insulting to the design) and it does honestly provoke a lot of though to a larger set design based of the mechanics of the moc.

I’m imagining a sort of castly siege tower thingy (I think knights kingdom had a set like this, I’m sure my brothers destroyed it) with the ram underneath and it suspended on skis and treads (for friction and easier motion, as all the weight isn’t on the skis) and pulled by either 3 Koruhi or one Khorei? Or perhaps some Ihu variant Kane-ra.

No offense taken; it is indeed very conceptual.

Actually, why didn’t I think of a siege tower?! I know that there’s definitely been a couple in LEGO before. Me rattling on about the Lord of the Rings and all. That would be brilliant, and given the mode of transport in the films, could potentially invite some unique Rahi.

For this, I thought two Rahi so as to make room for the ram to swing. Could certainly toy with Ihu-variant Kane-Ra.

I made a more professional model of the design, with 500+ pieces this is a large end set.

Comes with 2 frost wolves, 2 stud shooters and a catapult, the battering ram functions and would use 2 rubber bands.

Now that’s very cool. I’ll add it to the OP today at some point.