Ok so straight off the bat sighs ,yeah @Sokoda also designed a set based in Kanae and it also contains a Gukko bird, I just wanna say that any likeness or features mine shares with his are purely coicidental and this also goes for the rest of the set. Whilst he has gone for a temple design, I’ve tried to explore what elements of Kanae lifestyle would be like. So without further ado, another G3 set… 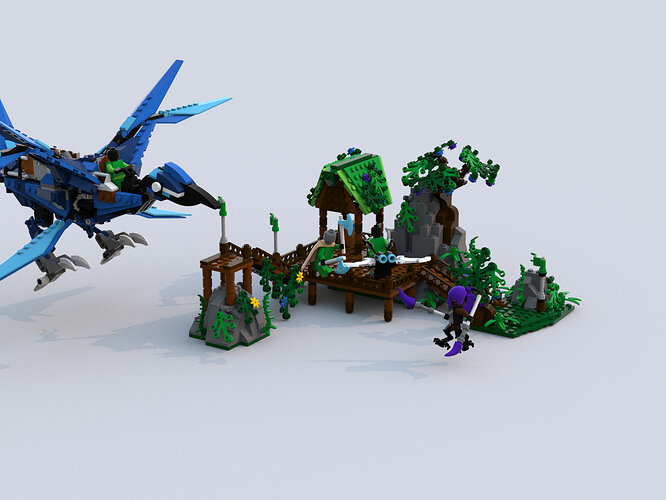 So I started this off wanting to do Gukko birds, I didn’t want a full technic but I did want a wing function like the original, I settled with this design based off the 2016 creature designs as the original gukko wing designs are kinda… meh.
The dock and foresty parts evolved off that, somewhere where Kanae matoran would be able to transport stuff, then a hut to show a little Kanae architecture and a small defensive turret. The turret is small as Kanae is not a rich or militant region and so they cannot afford good weaponry to defend their supply lines. The set contains 812 pieces (no masks included), I didn’t do any printing because… I’m not a fantastic artist. 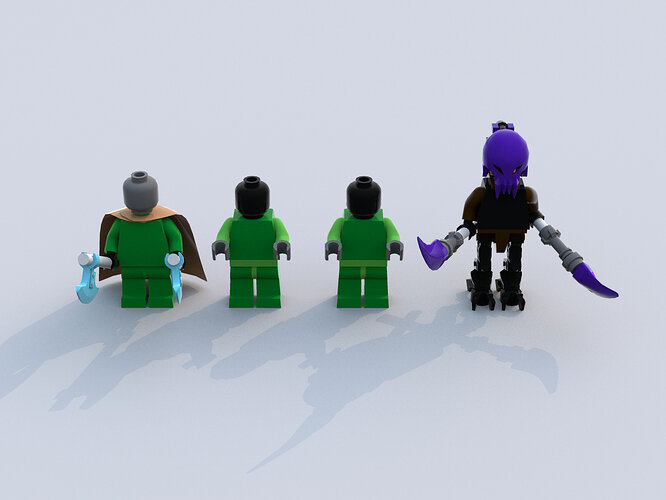 So we have Toa Lewa, 2 Matoran (A dock worker and Gukko Rider) and Vorahk. I picked Vorahk as he looks like a Minotaur and perhaps his goat like legs would allow him to easily traverse the terrain of Kanae, jumping between islands and climbing the rocky hills. 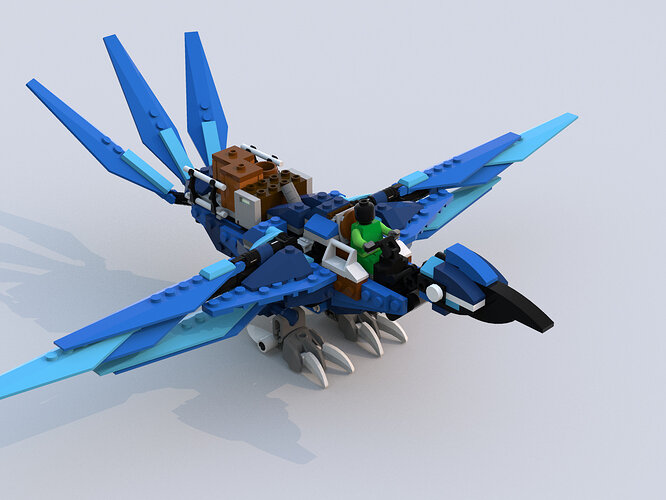 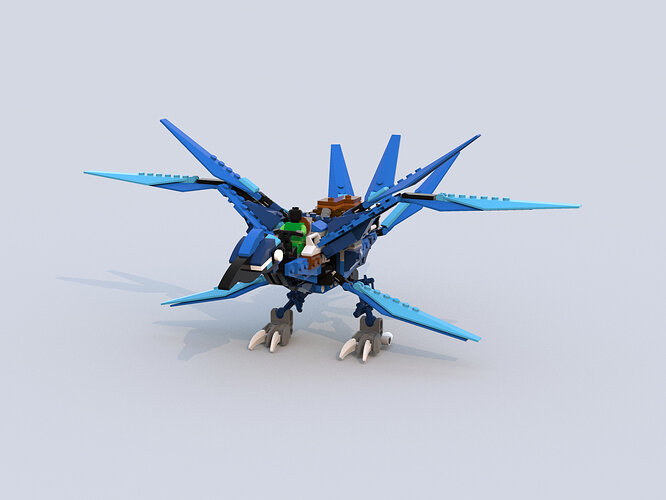 The Bird contains around 300 Pieces including it’s cargo and Rider. With kinda smallish legs but more designed to be picked up and the wing feature used, I felt it was fine. It isn’t coloured like the typical Gukko of G1 as I couldn’t distinguish the saddle with the G1 colours. The wings can move 35 degrees with the function and the individual wings can also be freely bent. 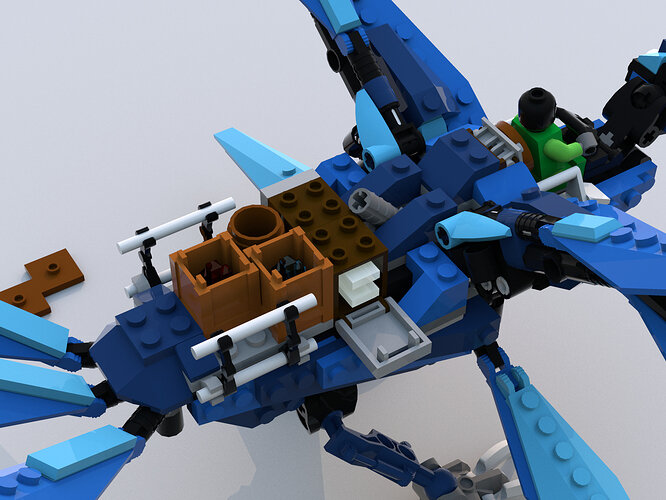 The cargo that comes with the set includes: 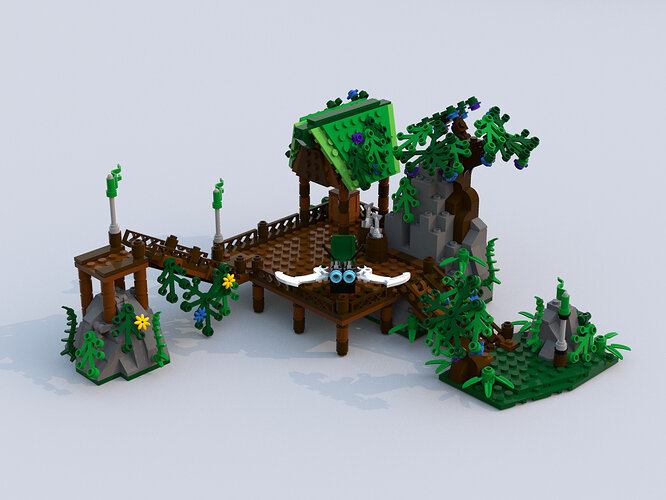 So the dock itself, I love it visually, from a play perspective… Eh, I couldn’t think of many features to include so the only feature is the gun turret. It’s designed to look like a crossbow or scorpion type weapon. The Hut is my view of traditional Kanae Architecture, aside from the Gukko, this is the main take from the set for me, the style of architecture.

Base on some Oomatu art, with viking-y slanted rooves in 2 shades of green and covered in vines. 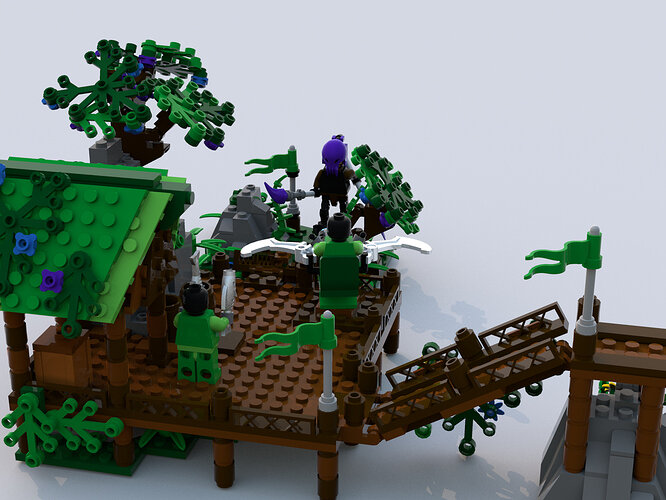 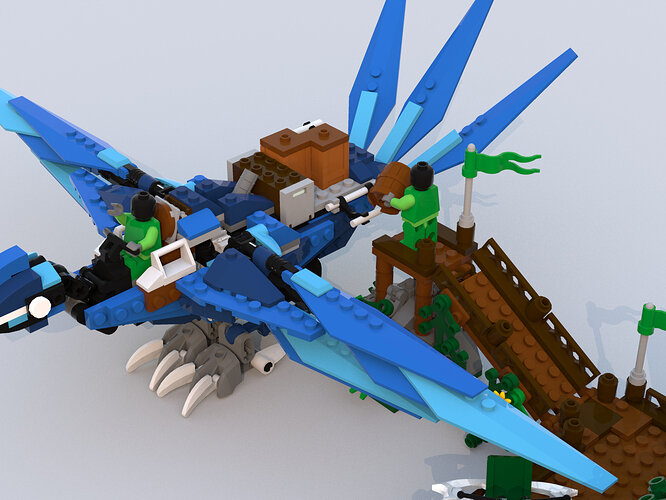 I just got back from travelling so I don’t have a ton of energy to write a deep explanation of what I did for the set design etc. So I’ll make this quick, I like the Gukko design I’ve got and I think it can co-exist with Sokoda’s mechanical version. I still have this ideal that all architectural styles of the regions are unique and I think this set did it’s bit. I don’t have any plans for any new sets but the next one will definitely focus on playability. This one has it in the form of the Gukko but it could and should be better.

Comments and Criticisms are welcome

Love the Gukko its totally different to what I did, but I love it, the head looks great

Oh, that Gukko can absolutely co-exist with Sokoda’s. Yours is a Rahi, right? Sokoda’s is a mechanical one, which I actually dubbed a “Gukkofighter” or “Gukko Fighter”, so it could simply be a model for the Kanaean air force.

As for play features, possibly some cranes and designated storage areas? With all of this, I’m really trying to start thinking of function within society, primarily due to all of the Star Wars Visual Dictionaries that I have.

Regardless, I really like that set, and I push for this version of the Gukko to be recognized over the more G1 version that I built at the very least. Vorahk’s pretty neat too.

Love this set overall. The dock area is a nice platform type build that we unfortunately don’t see a lot of in LEGO, so I’d buy this set based on that alone. Then we have the amazing Gukko build. I love the Blue Jay ascetic compared to the traditional G1 Gukko.

I agree with this wholeheartedly. It would be fun to combine this with Sokoda’s shrine set to have Lewa set off from the docks to find the shrine and have to call in mechanical Gukko reinforcements to fight the Rahkshi.

Thank you!
I didn’t add cranes because the gukko is quite tall, increasing the height of the platform and adding a crane proved a bit… iffy. I would have essentially had to have increased the piece count by a significant amount. Maybe I’ll do a redo with cranes but I think it looks fine.

Perhaps the mechanical Gukko can be for a military purpose or something similar and the natural Rahi variant can be for transport.

Don’t feel like having one set made from a region disqualifies another! I honestly love your interpretation of this set. One thing I was wondering about was how many pieces were in each model? The bird and the docks, I’d love to see how much went into each one!

Note: we talked about this in the latest episode of the podcast here, if you wanted to check it out!

Thanks so much again! I was just a bit worried because I felt my set was veeery similar to sokoda’s.

The “Blue Jay” Gukko including cargo as shown in the pictures (6 items) and rider has 306 pieces, mostly due to the technic mechanism.
The Dock and accompanying minifigures have 506 pieces for a set total of 812 pieces.

Edit: $60 feels like a good price looking at the pieces i’ve used, as for the concept of the stealth gukko being invisible against the sky, I hadn’t considered that. Perhaps it’ll be my next concept…