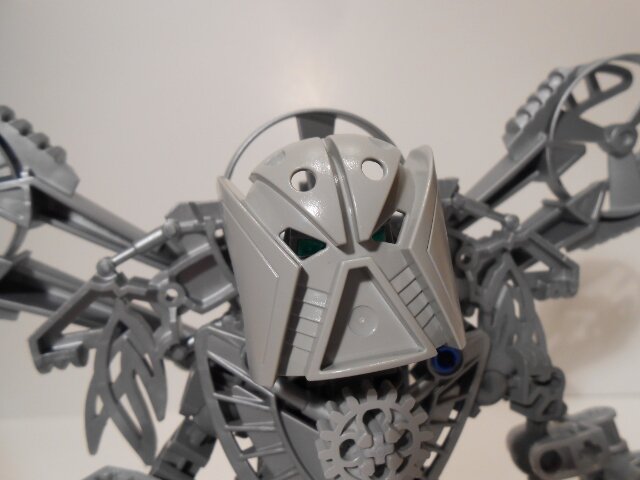 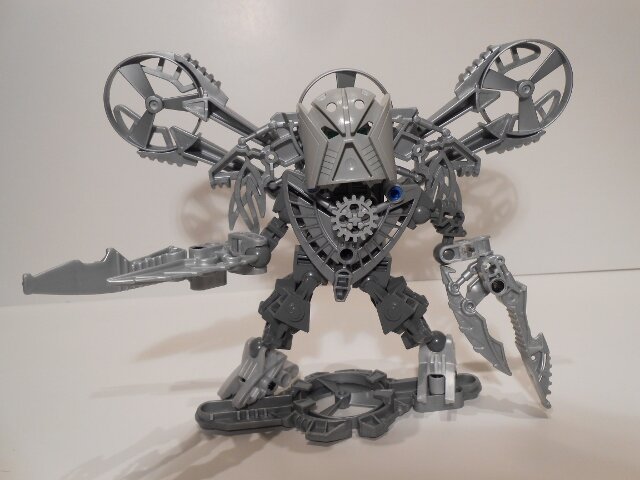 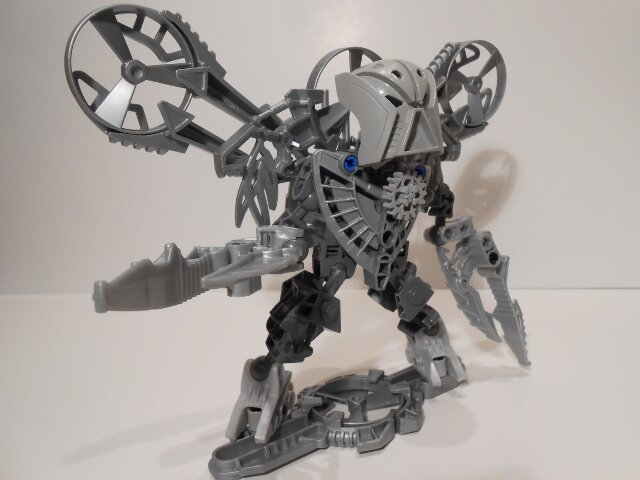 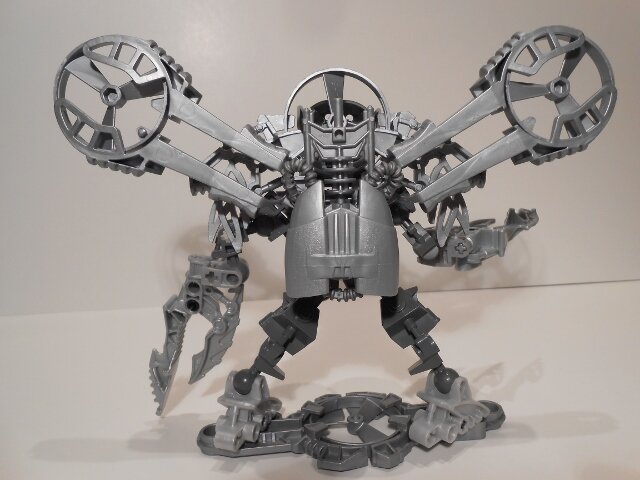 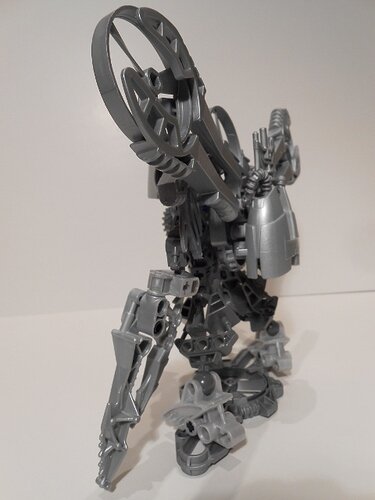 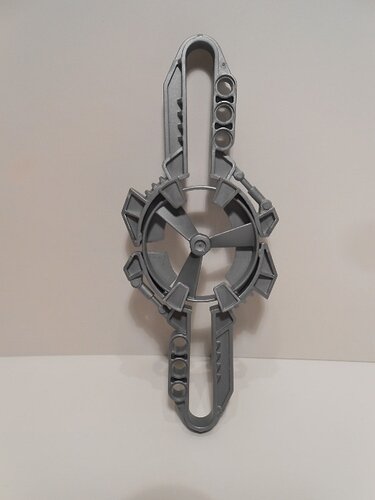 Short Biography:
Garema was a Fa-Matoran who was injured in the early days of the Matoran Universe and sent to Karzahni for repairs. The mad titan did as he always does and performed a horrible job, wrecking his form. Initially he gave him a pair of tools for compensation, strapping it to his back. These tools could manipulate magnetic fields slightly, allowing him to glide should he ever fall off cliffs. However, the wretched ruler decided it was not enough and banished the Matoran from his realm, sending him to the Southern Continent.

Garema would often return to the shores of the continent, looking in hope for a messenger or guide. Someone or something that was looking for him and the other Matoran, to send them back home or their real places of work. Instead, he often found more terribly repaired Matoran and would lead them to the nearest settlements to get them started. Though one day an odd creature showed up on the shores, a Rahi completely unknown to Garema. After looking him over, he came to conclusion that perhaps the mad titan had tried his hand at repairing Rahi now and resulted in even worse craftsmanship. And with much pity, he took the creature home to look after.

This creature he would go on to call Cogger, for its love of gears and cogs. Cogger itself was not much use for anything, though it tried desperately to assist in anyway it could. In truth, there were only two things Cogger could do aside from walk, sleep, eat, and provide companionship; that being able to rub things clean and clap. Give the old boy the rustiest gear one can find and it would be shining new again by the time Cogger was finished.

Unfortunately for the two, when the Great Cataclysm occurred, they were among those who got stuck on Voya Nui. With the harsher conditions of the island, the other Matoran’s view on Cogger went from “Whatever” and “I guess he’s cute,” to wanting rid of him entirely. The Rahi was a liability and drain of resources, providing nothing really useful to them in return. Garema was distraught by this and eventually worked out a deal where he could keep Cogger as long as he worked extra hard to get the items necessary for his existence. After satisfying what was needed for the group of course. And that he would do, only taking breaks to go to what little shore there was to look out and hope for rescue.

Then came the Piraka, who managed to show up in a time Garema was not watching the shores. He, like so many others, was fooled into believing these Skakdi were Toa, here to finally save them. While their distaste and insults towards Cogger made Garema suspicious, it was not enough to break him from their lies. As a result, he was enslaved by the Piraka as with so many of the others and taken away while Cogger slept. And as Garema was digging away at the volcano, Cogger had awoken and found Garema, only to freak out. The creature rapidly clapped and rubbed Garema’s mask, making such a commotion that it attracted one of the Piraka. With the Matoran mindless, the Skakdi just expanded his grin and punted Cogger into the lava. As the Rahi burned, Garema woke up from his enslavement and the true power of Cogger was revealed. He did not just merely clean things, but removed Infection, Poison, and, as it turned out, even the Antidermis influence. Unfortunately it was too late and he had only waken up in time to see his old companion die, unable to save him.

Before he even had much chance to do anything other than sob, the Piraka noticed he was no longer working and enslaved him again, this time with double dosage. When he was finally freed by the Toa Inika, he took some time to grieve his old friend before rejoining the others, placing the Rahi’s favorite cog over his heartlight as a reminder. And after Voya Nui had rejoined the Southern Continent, he did not stay with the others to rebuild and instead left to go visit the old shore again. After staring out into the sea for days, he decided what his new Duty was, and what must be done. Probably something he should have done long ago, something that could have saved countless Matoran and his old friend from the nightmare they lived or died in. To go out, use his good sense of direction, and find someone that know how to actual repair beings. Then either bring them back or learn from them how it’s done.

Cogger liked cleaning, more than just items, but the hearts of others, to cheer them up even if they found him a liability. And there were certainly a lot of Matoran that needed to be cleaned up from this mess, both on the continent and back in Karzahni. Physical repair was just the start, but with his senses of direction, who else better to lead and guide towards the beginning steps of healing?

Prior to Teridax’s takeover of the universe, he did manage to at least get his own body restored. Even began some experimentation on his old “wings” and some Rhotuka Launchers, creating the Rhotuka Board for faster travel and flight while he tried to perfect the same for his wings. Unfortunately, when Teridax did take over, he ended up stopping this experiments and his mission to repair the other Matoran. Instead, he was going to and fro, delivering messages and goods to other groups that needed it in help of resistance. After Teridax’s death, he helped evacuate the Matoran Universe, constantly searching for any remaining survivors possibly instead. And once satisfied that all who could be saved were saved, resumed to help restore any remaining Matoran still weakened and cursed.

Very nice! I never realized the Rhotooka Spinners fit do well into the Kanoka Disk launcher before!

Very nice! I never realized the Rhotooka Spinners fit do well into the Kanoka Disk launcher before!

Thanks. As for the spinners, the Matoran launchers hold them very well, Vakama’s isn’t quite as good in holding them, but is pretty close to the Matoran ones, and the Vahki ones…don’t hold them all that great. I would have used more Matoran ones, but it turns out I only had three, so Vahki ones it was.