This guy is actually one of my oldest mocs, quite literally one of my first three who were made years ago, before I had even read any bionicle stories and was just collecting them because they looked cool, and the other two were destroyed, just modified, rebuilt a touch and give an awesome custom paint job (actually this is sharpie, I did this before I started painting, even gave him some dirt marks around the vents and such on his mask, I will get a closeup of it later).
Funnily enough most of my bionicles and parts actually came from value villages and thrift shops. 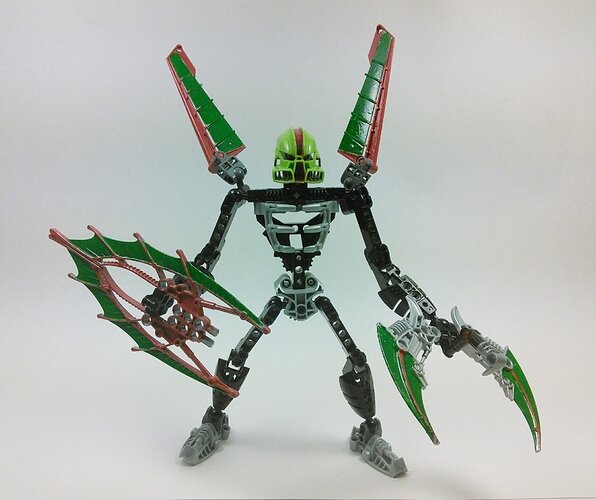 Gareveck was originally one of the matoran “fixed” by Karhzahni and sent to voya nui, causing his form to be greatly weakened but allowing him to be much faster and agile than other matoran, originally he thought he would be stuck there until he died, having only survived so far using his wits, speed and daredevil attitude, until he discovered a strange mask washed up on shore, after he picked it up it almost seemed to be calling for him, telling him to put it on, which he found himself doing before he could stop himself. Upon putting on the mask his form immediately started to change, growing larger as wings came out off his back and his weapons changing, his basic shield becoming what appeared to be a much better shield which could also double as an air/surfboard and his custom bladed shock gun becoming a much larger bladed weapon which could form and fire blasts of energy from the middle, only his body really stayed the same, staying barely armored and weak. After he changed he immediately left the island exploring and fighting when necessary, as he explored he met and was saved by Tekan and his team, who were trying to find parts for their boat after meeting the dead one, when he was jumped by a large group of bandits. After being saved he managed to join up with Tekan, exploring and protecting with them.
Personality: cocky, daredevil, risk-taker, dislikes close combat and seeing others get hurt, happy but does get depressed every now and again, isn’t looking for death butt isn’t scared of it, protective of those he trusts.
Other attributes/weapons: He has razor sharp wing which he can attempt to cut foes with, a double bladed weapon with a claw in the middle, can form and charge energy blasts below the claw then fire them, a shield that he can use as an airboard or surfboard, unfortunately he has low weak armor and is weak, luckily he is extremely fast and agile and has no fear of dying.
His mask gives him very basic wind powers, allowing him to create/move winds to help him fly and move enemies a bit, could possibly make a tornado but should greatly weaken him. It also hawk sight or long eye which allows him to see from extremely far distances.
Mask power: wind, hawk sight

little bits about him I forgot to add, due to his upbringing he can be quite a bit rude and inconsiderate/insensitive, really one can’t blame him to much seeing as how where he… Grew up(?) there were many battles over resources, no one really got along and they had all lived in Karzahni first so politeness and such wasn’t a really important survival skill for them. He also hates seeing matoran slacking off on their work and hearing them complain about minor inconveniences and such in their lives or hear them complaining about their Job or saying their life is hard. He has actually been known to start raging at them, yelling about how easy their lives are compared to how his was and using examples of his past life and telling them how he’ll send them to Karzahni himself, until one of his teammates calm him down or forcibly drag him off

And here’s his mask! Told you I’d get a closeup! 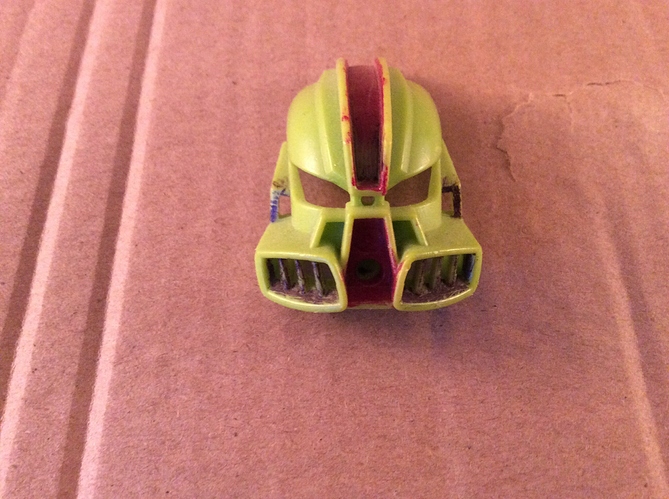 Yeah I meant to do this a while ago but here it is, garvecks custom “painted” (sharpie) mask, also no it’s not blue on the sides, something was up with the lighting hat was making the camera register it as such.
As you can see I actually made dirt/dust marks along the vents to give it a cool, semi realistic flying look

I like the painted parts, it adds some character into the build.

@JasonRiceGamin_YT I’ve found so many out at those places, lots a peices from there.

@Tobin-Bartram Thanks! It was fun to do.

@BBricks Thanks, I’m best known for doing stuff like that.