I suppose I’m not entirely sure where to begin. 2015 was a rather interesting year for me personally, and while I could most certainly jabber on about it, I think I’d be better off placing my reflections elsewhere. Here, however, I’d like to focus on my development in moccing and briefly explain what went into making my creations(for better or worse). 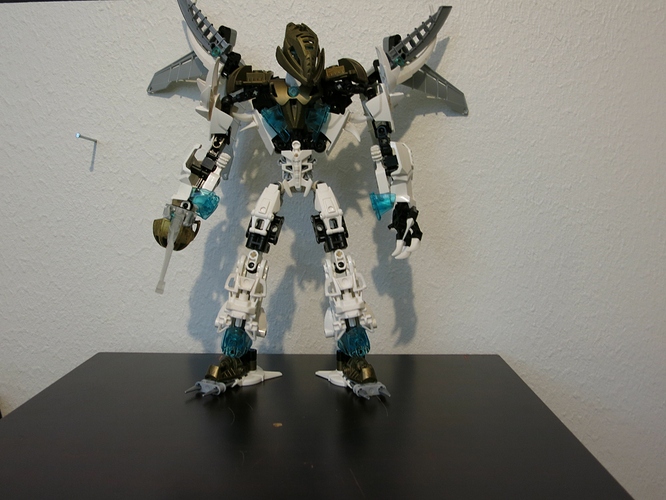 I suppose a fitting place to start would be with the moc you folks are most likely to recognize me by; Atequ. Atequ is a long-standing character that’s been through many, many incarnations over the ages, and I’m happy to say that this version is my favorite to date. I started on this moc back in 2014(a couple months after I joined the boards) after realizing that I had become quite fond of using Atequ’s golden Kraahkan as a symbol, despite not actually having a proper moc for him. The main idea was to clean up and modernize his “Phantoka” form, which I think was rather effective.

Since my last post regarding this moc, I’ve done some minor tweaks; specifically fixing the feet, which initially were rather odd.(this particular WIP picture looks straight out of Age of Ultron XD) 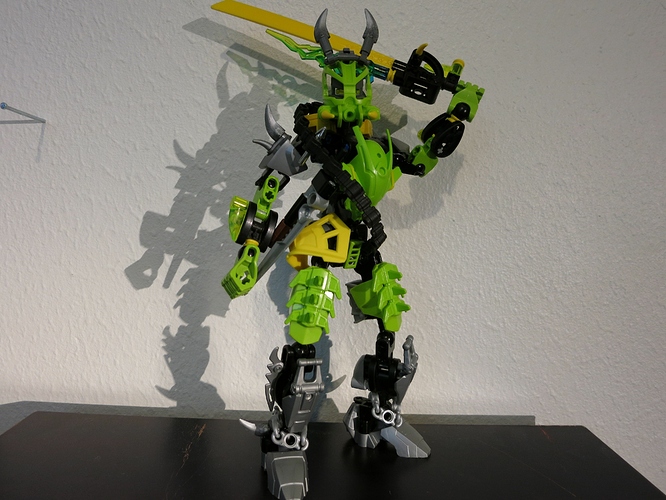 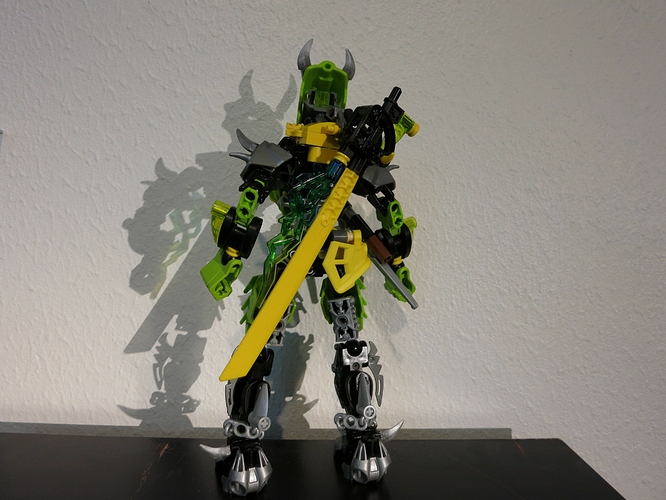 The second MOC I’d like to talk about, Drathii, is both an oddity and likely my personal favorite moc I’ve made this year. In story, Drathii is my main character in the Okotoverse and is a sort of a tribute to my old self moc, Dartho. I came at her construction with the idea in mind that I wanted to build a G2 Dartho, but didn’t really want it to be my “self moc” anymore. At the time I was spending a lot of thought questioning identity and what makes a character, and I came to the (mostly)accurate conclusion that people’s experiences are what molds their personalities. As such, I decided to dismiss the notion of making my story’s main character essentially just be my likeness dropped into the Bionicle universe. I wanted them to be someone who’s already been through a lot; an already developed character. I ended up deciding that Drathii would be my foil; had she lived my exact life, she would’ve been just like me, but she hadn’t. She was born into a chaotic and war-torn Okoto just beginning to recover from the great cataclysm. She had to fight bloody battles to maintain her duty as a Toa, and it weighed heavily on her conscience.

The whole idea made me think back to Akira Kurosawa’s Seven Samurai, specifically Kambei Shimada(the most experienced of the group), and thus I decided to give her a subtle samurai motif.

Since I initially posted her, Drathii’s been through a lot of changes; namely her proportions and shoulder/back armor. In the initial version, she wore heavy shoulder armor that kind of detracted from the implied feminine stature and was simply awkward for proportions and posing. I removed the large armor parts and replaced them with a partially system construct that covers the shoulders and back. It also gives her a place to store her katana and provides a much needed splash of yellow to the back that more than makes up for the omitting of the “hair” from the first version. I also gave her a crest.(Slightly less-than subtle reference to her inspiration, but I think the cool factor makes up for it) 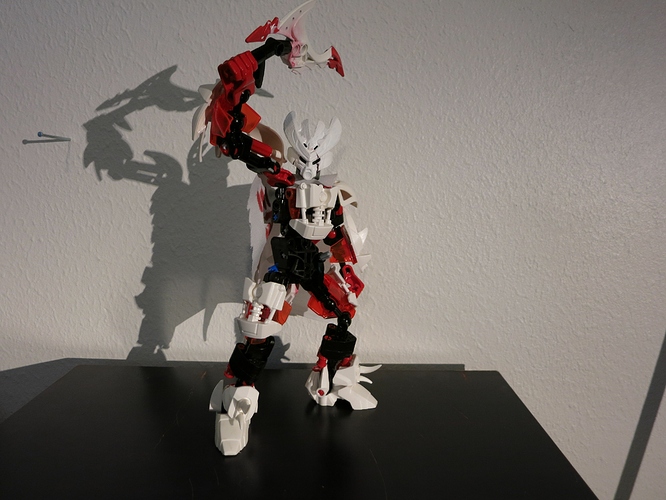 As I’m sure many of you recall, TTV hosted a Okoto world-building creative content contest here on the boards last summer. Pridak here was my entry to said contest. For a while I had been tossing around the idea of bringing a slightly obscure, yet solidly intriguing G1 Bionicle villain into G2. With the contest in mind, I ended up building Pridak as an prideful, ingenious, and psychotic tyrant that razed Okoto in the period following the cataclysm(tying his story in with Drathii’s). I translated that into the build by making Pridak essentially how I envision him looking prior to his time in the pit, but with the addition of Okotian symbolism, hence the mask and cape. Speaking of which, those two parts are my personal favorite aspects of the moc; both being painted/crafted to give the character more of an identity.

I haven’t tinkered with him since I entered him into the contest, though I’m currently considering giving him a better way to attaching his torso armor.(as it’s held on by one miniclip) 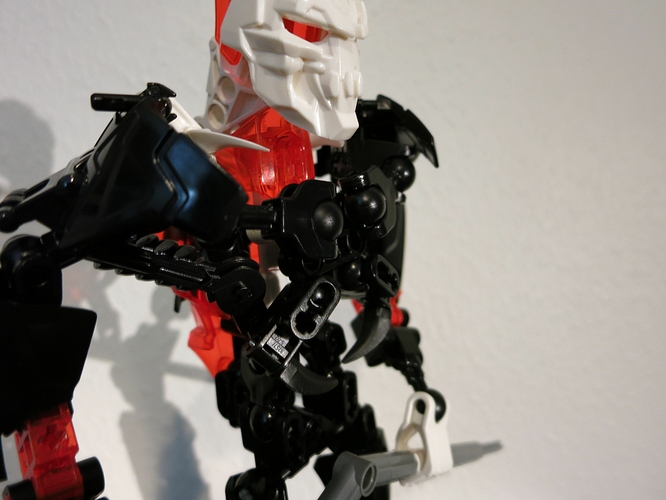 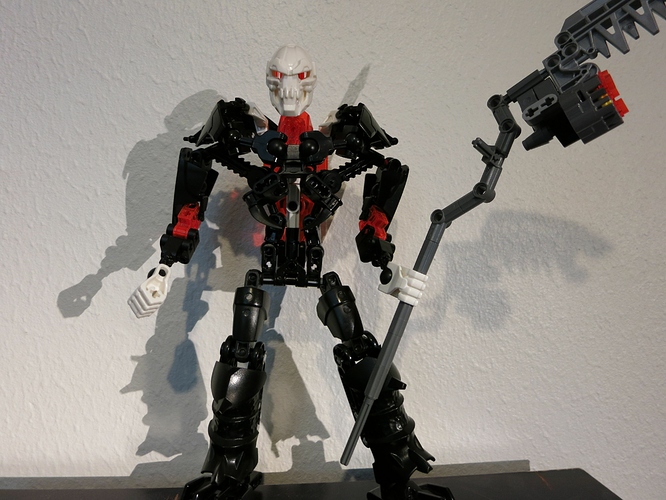 Lastly, there’s Kaitapah, the resident sp00k/Skull Reaper. I’ll put it out there right now; the guy’s not very photogenic. When I entered him into Swagmeister’s Halloween contest, the photos were iPhone pictures and beyond awful. And even now that I have my camera back, I was only able to get one picture with decent enough lighting to show off the aim of the moc. Kaitapah was my attempt to use CCBS(and a few older parts) to emulate the structure of an actual skeleton’s torso; complete with a ribcage, a spine, shoulder blades, and a pelvis bone. The rest of the moc is somewhat lackluster; limbs and head being basic enough, though I am happy with the fact that he carries a fully functional six-shooter scythe.

I haven’t really messed with him since, and soon he may be fated to find his place in the graveyard once more.

Lastly, I have my two villager mocs, Piruk and Tizuri. They’re pretty straightforward, but I really wanted to make up for the lack of basic villager/evil villager sets. I also found myself in possession of a very mangled skull spider, and wanted to somehow make use of it. 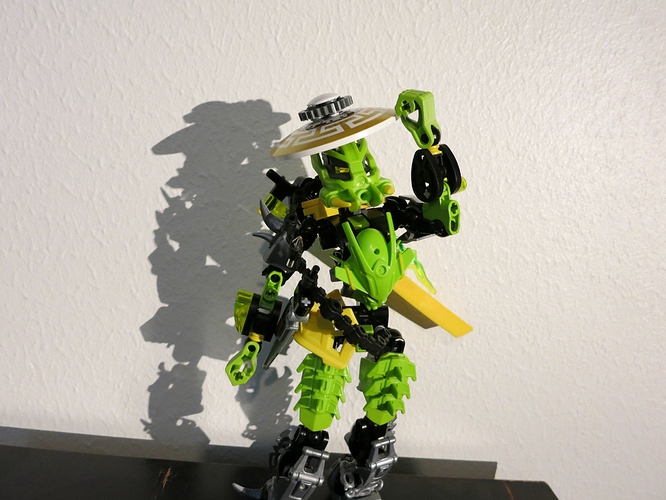 And that’s it! There’s another moc that I have yet to reveal, but I didn’t want i̸̧̞͖̫̤̤̭͇͂̀́̌̅ṱ̨͔͓͎͓̺̘̙̊̐̀̾̚͢ to be overshadowed by all of my other 2015 mocs. As such, that Ţ̵̻̗͚̜̘̻́́̔̅̚H͉͓̠̜̱̭̥͚̬̼́͒͐̐̒Į̴̮̲͔͎̞̖̖͑́͑̉͡ͅŃ̴̨̙̟̜̦̦̥͔̐̆̉̀G̴̨̬̰̟̦̓̊̌̓͗ will remain hidden until I make it a topic. For now though, I tip my hat to a rather nice year on the message boards, and look forward to another!

As always, I’m totally open to C&C and would love to hear some opinions! If you have something to say, please do.

You had a pretty good year when it comes to Moccing, Gar.

Keep it up, can’t wait for more!

Your MOCs are pretty amazing!