I haven’t had any parts to make a full-on MOC since I finished Syras, but I’ve been using what I’ve got to update some of my other MOCs. I recently took a look at Ghar and decided he needed a bit of reworking, and that’s exactly what I did. He’s not too different, but I feel he’s all the better for it.

So let’s get into it, shall we? 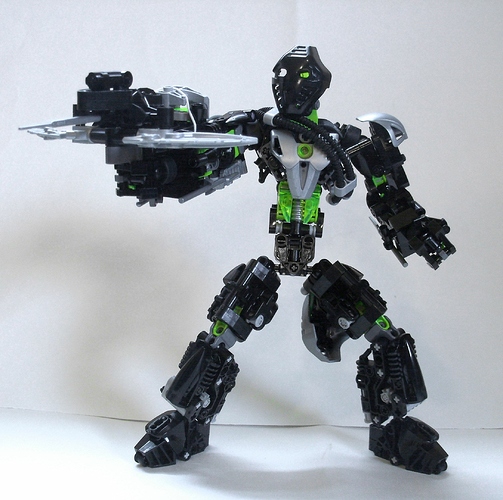 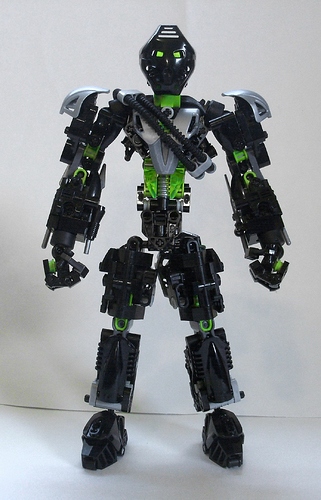 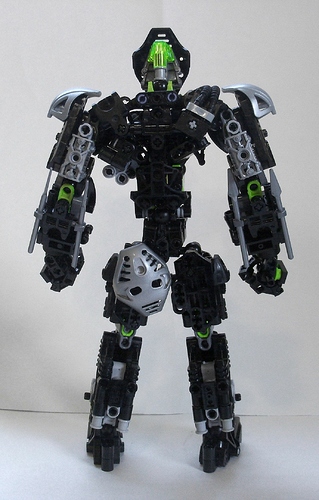 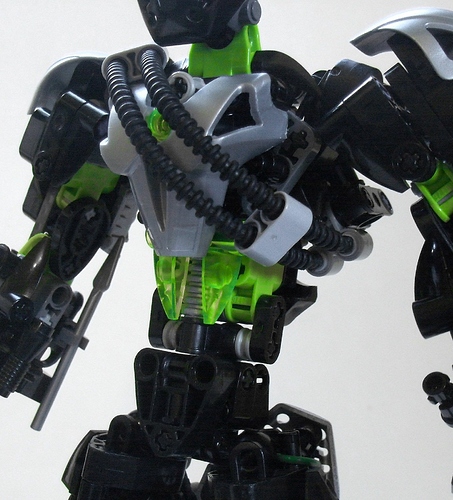 Close up of the torso, which was mostly my main focus for Ghar’s update. 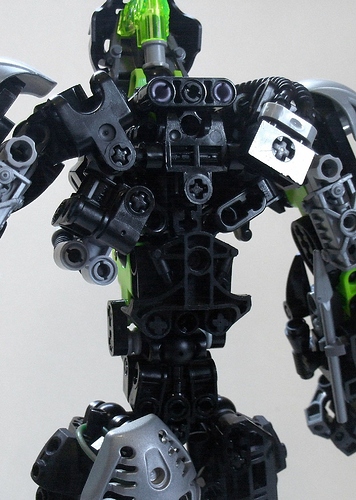 It involved quite some chiropractic prowess, as I decided to completely change the spine construction so that he can stand straight. For anyone who didn’t know, the older Ghar versions used a weird, gear-like beam piece as the spine, but I’ve replaced that with a normal Technic beam. His back is really Technic heavy, but it doesn’t look too awful, and it fits with the mostly mechanical look. 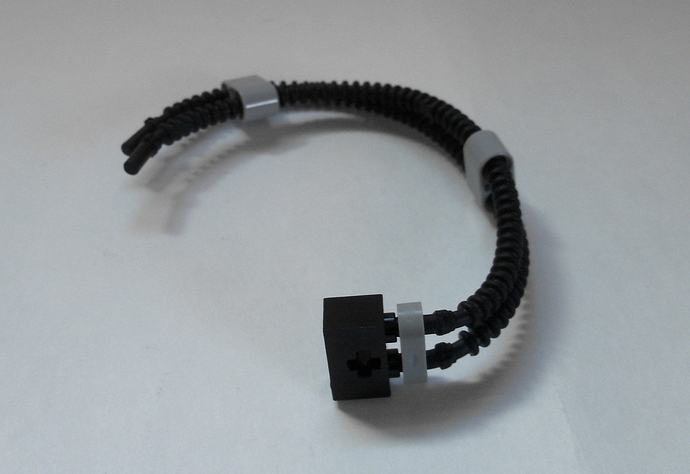 I’ve change up how the bandolier attaches, using a Technic brick and an assembly connected to his back. 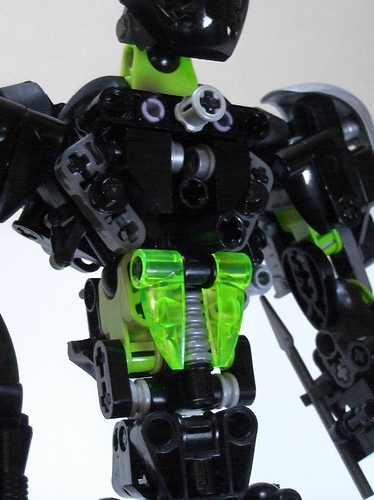 The inside got a revamp as well, due to the new spine piece. 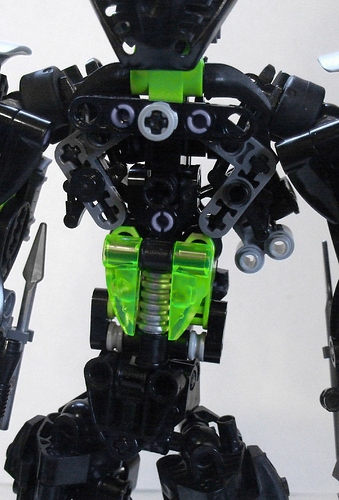 Only three parts are not attached that fill the torso armor gaps, but now those Bohrok eyes are fixed to the torso, which they weren’t before! 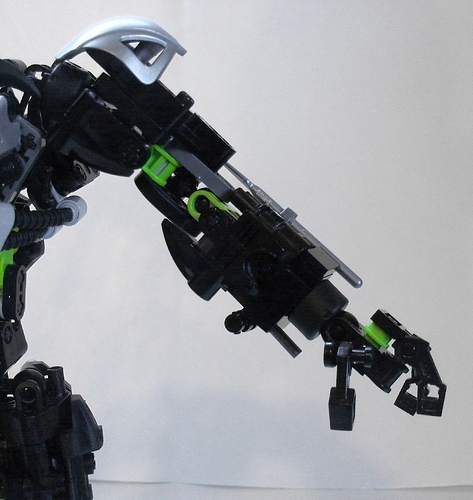 Arms had only some slight work done to them. I’ve added a Bohrok eye up towards the top to fill in the armpit gap, and one below that to fill in the elbow gap, but I’m still on the fence about that one as it looks odd from some angles. 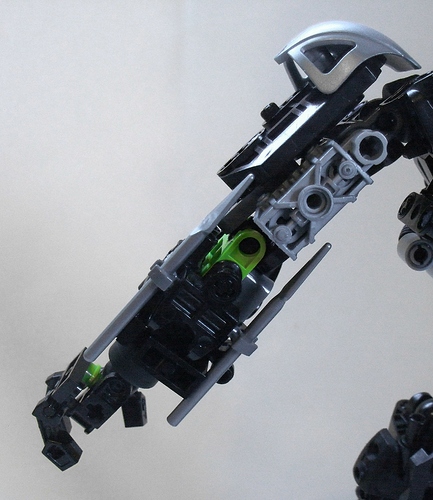 The entire back armoring bit was changed, as it is no longer a slope brick. It now consists of a Technic assembly with some Metru armor which I still need to paint black. I’ve also gotten rid of the bolt carrier strap he had and moved extra bolts to be on his forearm. 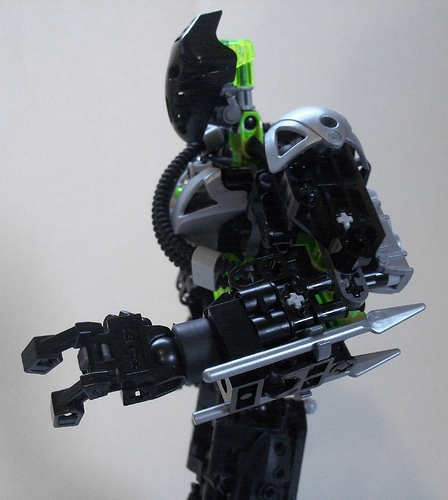 Creates an interesting look, I feel, and it gets rid of the obnoxious belt. 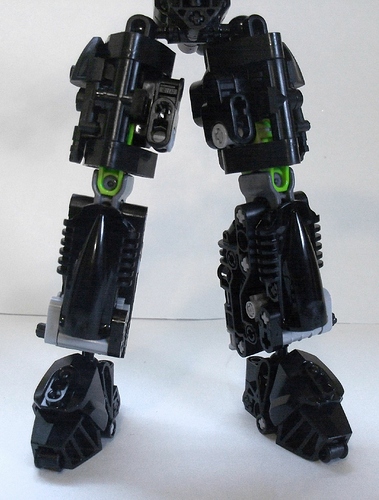 Legs haven’t change too much either, but there are some key differences. 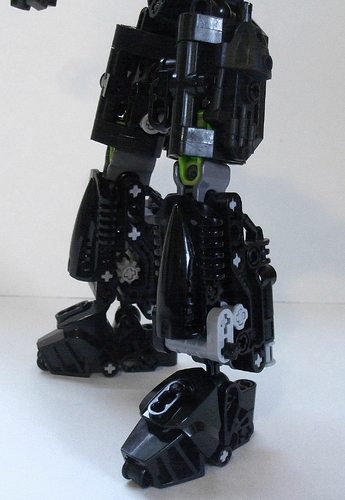 The green studs on his thighs have been replaced by black ones as they weren’t necessary, and, as is perhaps the most obvious change, the Inika foot armor has been changed to the piece seen here. Sure, it breaks the textures, but it makes the leg less flat and looks more like boots. Also, they aren’t completely done yet, I need more black pieces to finish them. 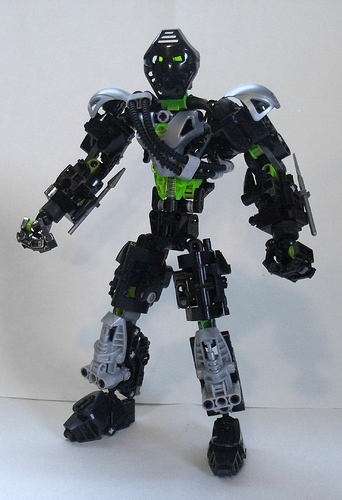 I also have alternate shin guards, this time silver Metru feet. These ones cover up the annoying knee gap, but they are a very sudden concentration of silver, which is why I don’t have them on. 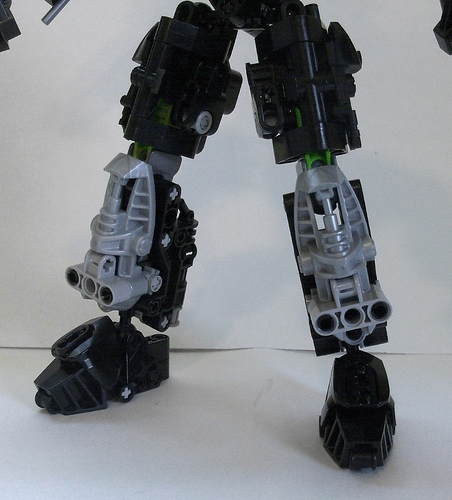 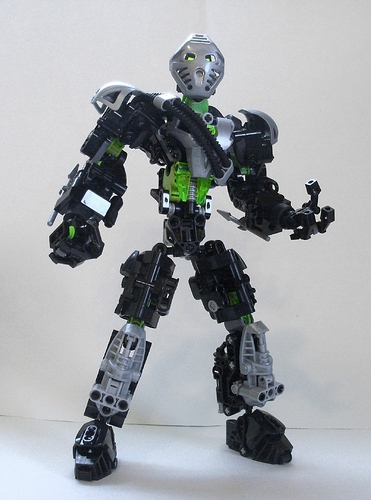 They look better with the silver mask, though. 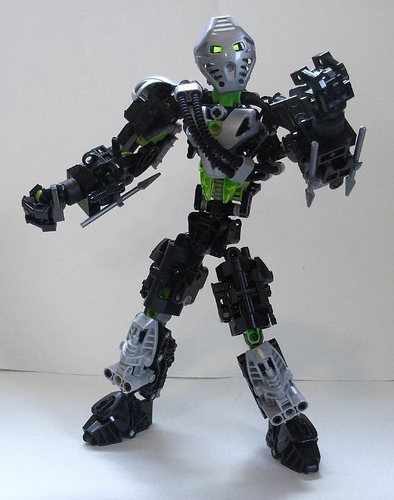 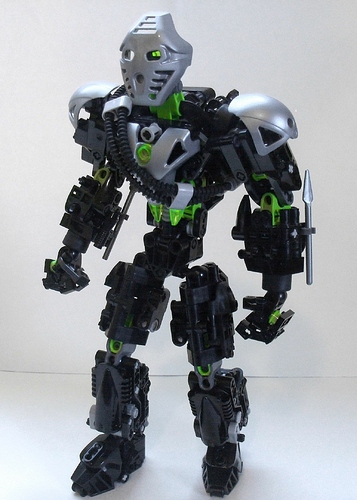 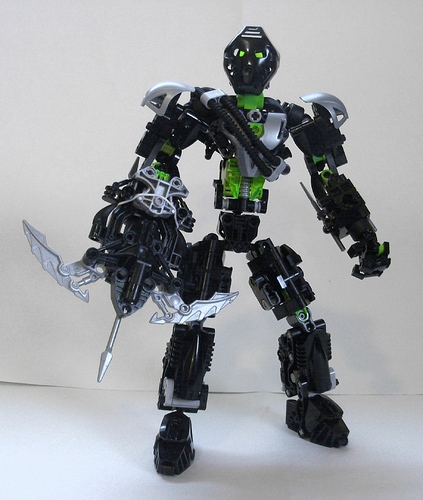 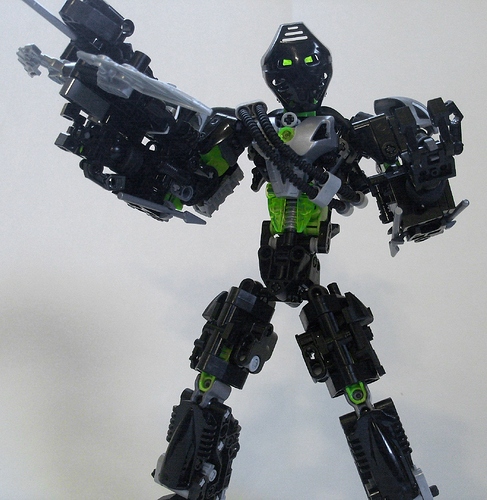 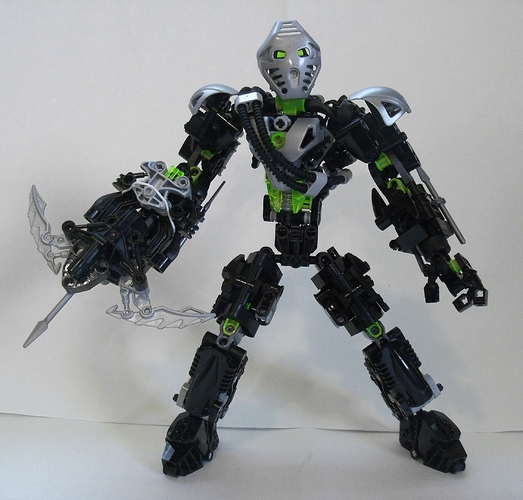 Also, a bit of a questionnaire: Would you prefer Ghar’s quakebow A) Stay as it is, B) Be revamped, but look similar, or C) Be turned into a hand crossbow? 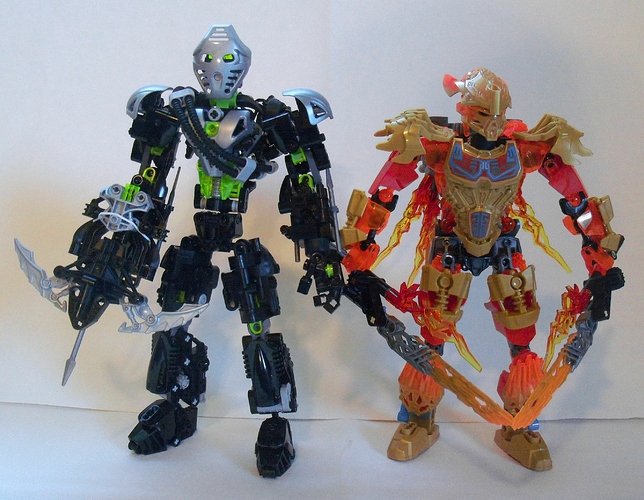 Size comparison with Tahu Uniter. Ghar’s gotten a lot shorter over the years! 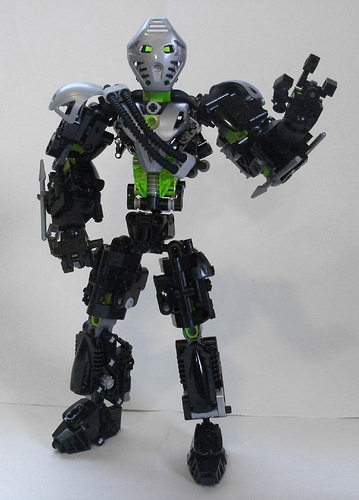 That’s about it for now, please critique if you wish!

I’d say that it looks better with the black mask, anyway, but to each his own, I guess.
This is quite good.

looks really cool, but the legs and lower arms seem a bit… square

still a really cool MOC tho

Now me I think he looks better with the silver mask. lol

Pretty good, not a huge fan of the arms though, and the nuva armor is so small on him it kinda looks weird. Maybe some larger pieces?

Very nice, I like the scattered silver. The build looks great, just the arms seem a little stiff.

His arms look a bit square.

My only complaint is the color layering and his back.

I largely agree with everything that has been said so far. I’d revamp the bow. Because why not?

It’s been a while since I critiqued this guy, hasn’t it.

I think the one thing I’ve noticed on every version of Ghar, but haven’t pointed out, are his knees. The ones that are super bony in a build that’s super bulky. Just getting rid of the socket piece and lengthening the shins slightly can improve him a lot more.

I think the color scheme’s been improving from what I remembered - lime is now solidly an accent color, black is his main color. The lime green on his legs is a bit out of place, considering the use of silver as accents on the rest of him - probably could help to remove that. Also, the trans lime green in the stomach. Not sure if that’s intentional or not, if so, you should look into ways to make it more prominent.

On to the build itself. The torso’s fine, trans lime aside. The thighs and arms, however, just look like jumbles of black parts thrown together. You’d do better off to have one somewhat larger black armor place added on the front of the thighs. The upper arms visually look custom just for the sake of custom - they need to be thinned and rounded out, whether that means scrapping them wholly and using a simple arm or not. The forearms are passable, but like the thighs would benefit from having one solid armor plate on it. The shins look decent but would work better is they were bulkier.

Awesome MOC by the way.

Good structure and color distribution.
Nothing to complain about.

Sweet Christmas this thing is cool looking. I love the weapon arm, and the entire is extremely well built.
9/10

As I see more and more Mocs of this complexity I realize I can’t comment on these. They are beyond my tier of building. I must train harder.

Looks amazing…I really like the shaping of the torso and lower legs…there is literally nothing I would dislike about this MOC, perhaps it seems bit uninspired and somewhat blank…It is perfect to the point where it is getting bit boring, does that make sense?

Wow, this MoC looks EPIC. The crossbow is probably one of my favorite parts… I don’t really have to much to complain about here… Seems a little Technic heavy, but that’s just because I don’t use a lot of Technic in my MoCs. Great job man!

yo, dose the cross bow really shot the bolts by pressing something?

if not please do that.