I personally love Halo, and building. So you can imagine what I thought when this came out in 2009, and kinda became what filled the void Bionicle left in 2010 when it was canceled. I feel like Mega Bloks, apart from the system, is pretty good. It has flaws like the hands and ball joints for the figures breaking while holding a Lego element.

They, and Kreo have some Great Mini-figs, with Articulation and all, while MegaBlocks is the most detailed.

I used to collect all the colors of Spartans. I didn’t bother with the sets back then, the plastic was still worse than awful.

I think the plastic was pretty bad, one of my more recent sets I got, The Cauldron Clash, had all the figures break except the marine, crawlers and watcher. And the worst part is the Promethean Knight and the two Spartans that broke were some of the cooler figs

Got a refund yet?

No, I didn’t. I was actually reminded to do so now. I will go get my refund! But the way the figs broke gave me a knightmare(pun intended) because the Spartan Soldier’s head came off as soon as it came out of the package, and the Promethean’s leg joint just fell off when I got the leg on. Pretty scary, when you think about it

This is why I spend all my moneys on NOT Mega blox.

Yep. I still like the Mystery packs, which give you 1 out of 8 figures, and they have actually like 12, but 4 are so rare they don’t appear on the package or box art. I remember I got like 15 orange dudes when I tried hard for an ultra rare dude in series 3.

Mystery packs are the best, and a good way to make $.

Yeah, and for the most part worth it. With the prices staying the same, and the new armor system, as long as I don’t get any grunts I’m willing to buy it. But those grunts ruin just about everything. Whether it be your tank in Halo, or your killstreak when they suicide, everyone knows they had the best humor in Halo 3.

Actually, you’d be surprised! Mega Bloks has insanely improved their plastic quality. I’d say it meets the standards of a modern lego set.

I have a huge collection of Halo Mega Bloks sets, and I’ve been collecting them since the very first wave, so I can vouch for pretty much anything. (Ask me anything!)

The figures are seriously ■■■■■■, and recently Mega Bloks has been dishing out figures with more articulation than they already have. It’s honestly incredible what such a previously low quality toy company has managed to do with this theme.

ALSO! Protip for getting rare figures in the blind bags- it’s not that hard. There’s actually a way that you can tell what figure you’ll be getting, and that’s by looking for a specific code on the back of the bag. 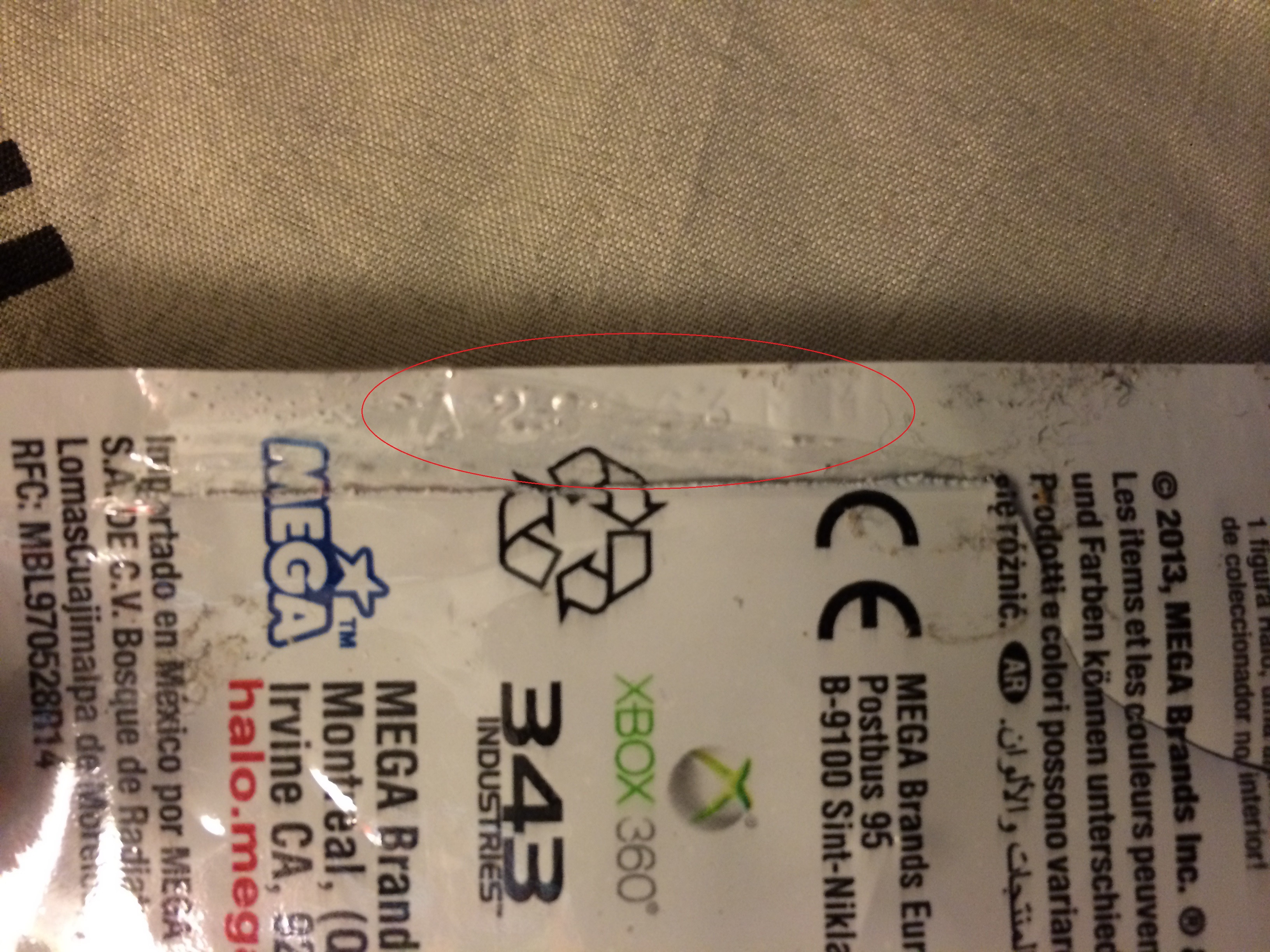 See that indentation? That’s the code you’ll need to look at and match up with whatever code that’s according to the character you want. There are lists online you’d have to look up. Sometimes, none of the codes you find will match up to the bags in the slightest. For example, you find a list for say series 6 and all the codes start with “A280” or something like that, but everything you find of series 6 starts with “A405” instead. It’s happened to me before, and all I had to do was just search up a different list. I think lists vary depending on area or something, I’m really not sure, but there’s usually only two different lists per series at the most.

Anyway, enough of that. I hope you guys feel enlightened and my rare camo skirmisher and I wish you luck on minifig hunting.

@squeaverking
Wow that’s really unfortunate, and surprising considering I own this set as well and I haven’t experienced anything like this at all…

I don’t think they have LEGO levels of quality. They have improved, but not to that degree.
I think the main problem is probably inconsistency (having a larger margin or eror in parts).

I have a few sets. They’re pretty nice, though where parts stay together varies from piece to piece.

I HATE MEGA BLOKS! It’s terrible, just bad, Lego rules. ALSO I have a huge collection of Mega Bloks Halo figures. I’ve been collecting since 2009 for Halo but I have a lot of the MB Dragon Sets. And wow is there ever a difference. If you look up a few of Jangbricks reviews of 2014 Summer Sets, Mega is adding blocks that consist of improved quality. The reason the Mini-Figures aren’t the best in quality is because the joints aren’t as think as Lego Figures. But they’re trying to make them more Action figure theme rather then basic, simple designs. Not saying I have anything against Lego’s style of figures. I’m surprised that Mega Bloks Halo is something me and @Venom have in common.

Might I point out, Mega will EASILY replace parts, stickers, and I think instructions that were missing or broken. Though they don’t always send the right thing sometimes, just contact them again, they don’t mind.

Also, I have over 300 figures, about 40 rares including SDCC figures, and the Mammoth. Just a little bit showing off LoLz.

So… the highly anticipated Scarab is out! Thoughts?

Personally, I think it looks very plain and boring in places.

I’ve been a huge fan, though, at first, I only got the figure packs due to the poor plastic. I started getting the actual sets around 2011, and I’ve gotten numerous more ever since.