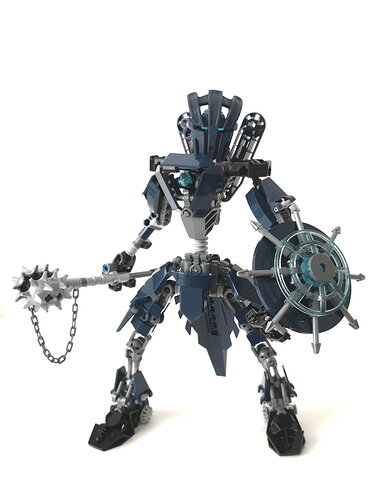 Hey everyone! Posting my first topic on these boards to present my take on the first Toa herself, Helryx. 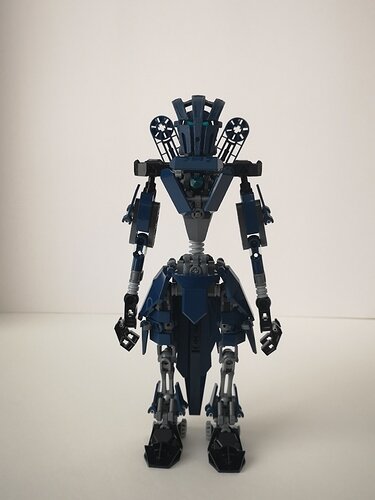 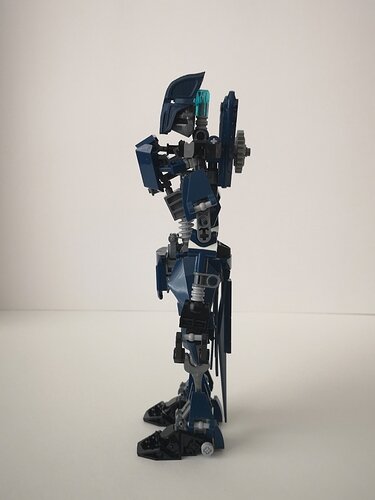 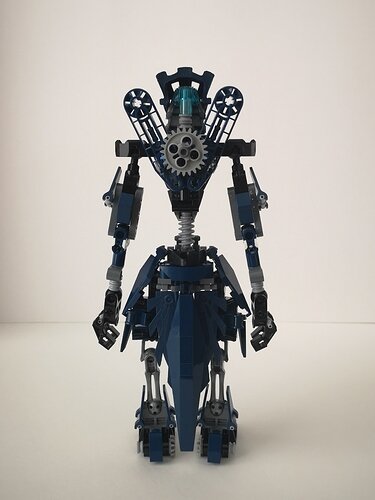 In order to create a look that would appear unfamiliar and ancient to Takanuva, I integrated System and Slizer/Throwbot elements into the design rather than using more contemporary BIONICLE armour pieces.

The faulds are meant to evoke the look of warriors from our own ancient past.

I gave her a dark blue colour scheme as I always thought of her as a darker, more severe character, given her self-exemption from the Toa Code and the lengths she’s willing to go to accomplish her duty.

Her eyes and heart light are trans-light blue, to help tie the exclusively dark blue scheme more closely to her being a Toa of Water. 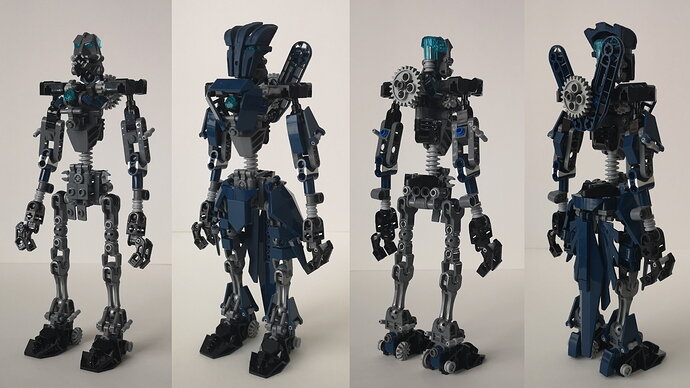 The body underneath the armor is predominantly Technic / BIONICLE, and is reminiscent of the Toa Mata with the back and shoulder gears, waist coil, head, and two-fingered hands.

I wanted her to have a thin frame to keep with her being described as frail, but I also wanted her to appear imposing and capable.

The internal structure is mostly light bluish gray, dark bluish gray, and black, in order to give it an aged look. 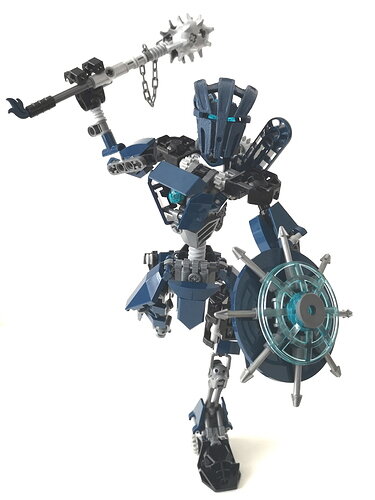 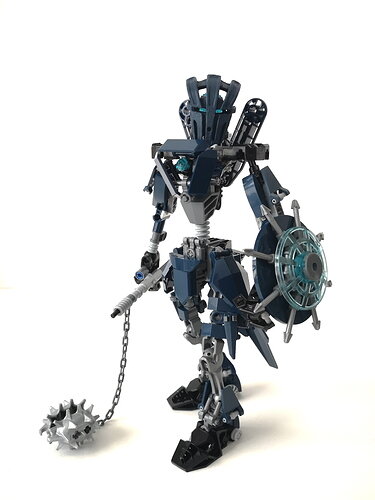 Her weapons use silver elements to represent the use of Protosteel.

The mace can easily be converted from a bludgeon to a flail.

The shield design is a throwback to the sea-faring vikings. By convenience, the eight-pronged design ended up looking somewhat like a compass rose. 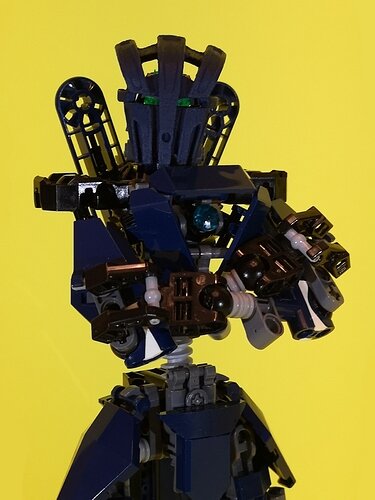 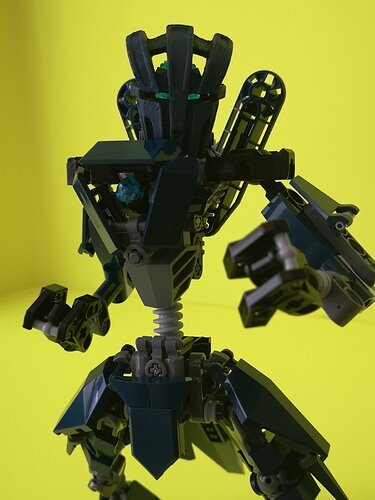 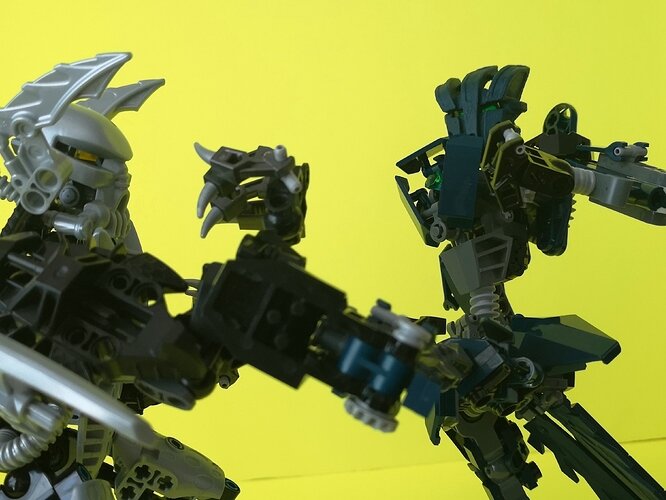 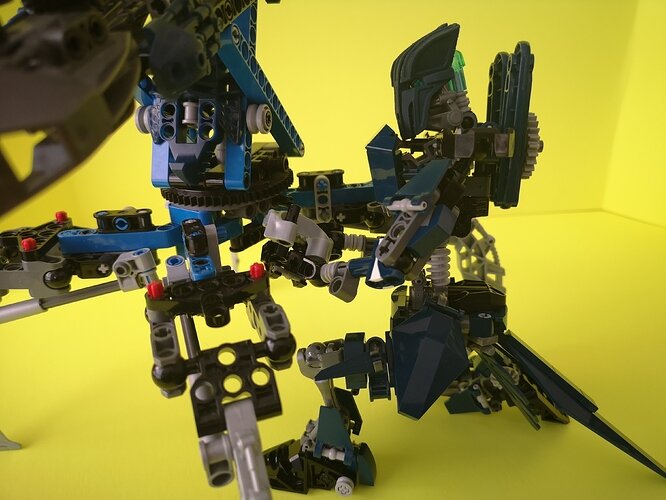 The figure has 18 points of articulation, counting the swivel waist and one at each finger. In addition, five sections of the faulds are mounted on hinges and clips in order to allow movement. The ankle flaps can also be positioned to suit the tilt of the ankle. 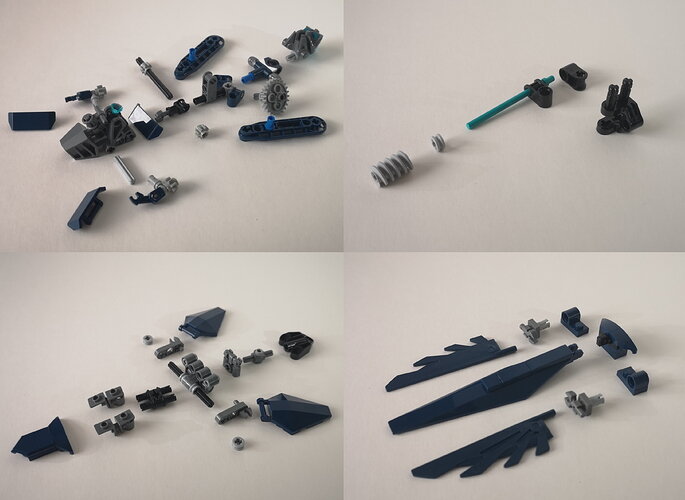 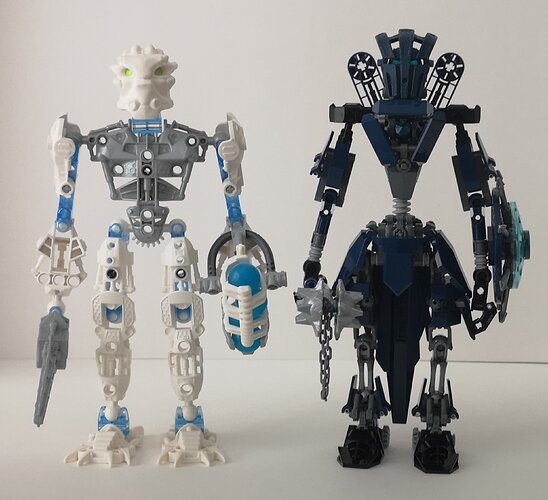 This figure is almost the same height as a canister set, with the height above Inika Matora being attributed to the mask. 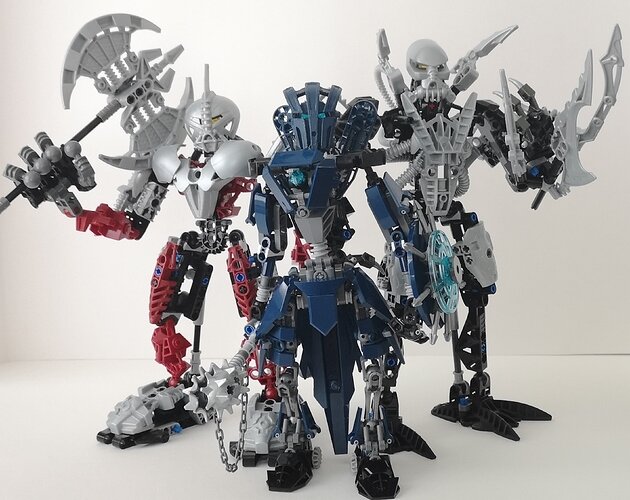 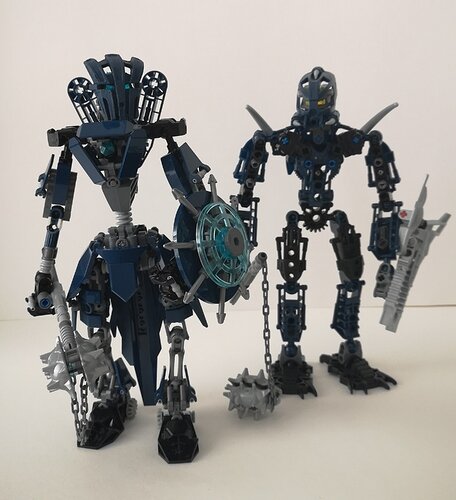 Just for fun, here’s a comparison with the Helryx MOC I made back in 2009. The design has very little in common, bar the colour scheme and chain mace, which I used as a base for the new one.

Save for the 3D-printed mask, all parts used in this MOC are authentic, unpainted LEGO pieces.

I used KhingK’s Mask of Psychometry, which can be found here:

Additional pictures can be found on imgur: 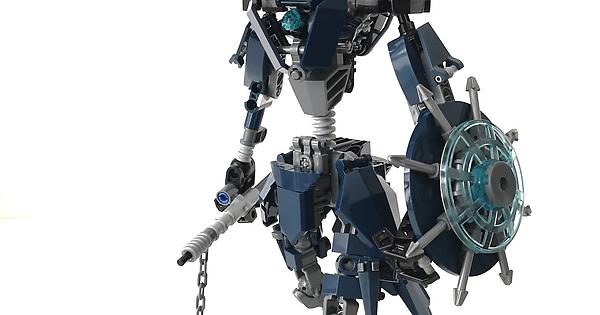 Thanks for checking out my MOC and good luck to all entrants!

Wow! I seriously love the ancient look this one has! She looks tribal and mysterious, and the weapons here are some of the best yet!

Honestly I feel like the pictures without the photoshopped background end up looking much better. But the Moc itself is great. I love the darker colours on this one. Mace is really cool too.

Thanks for the feedback, I definitely see what you mean. The green/yellow background makes the figure pop more.

Love this design. Her figure looks almost cartoonishly exaggerated but it works so well. Probably the best skirt I’ve seen in this contest so far too.
Great job.

This is easily my favorite rendition so far. Everything about this build is wonderful. It’s feminine, frail, lithe, experienced, weathered, skillful, emotive. The proportions work really well, the mask is perfect, the shield design is great (and I love that it’s Norse inspired), and the mix of pieces from many generations and types is done masterfully. Excellent, excellent work!

Thank you very much! It’s my first MOC in years and I put my absolute best into it. It really means a lot to me that it resonates with you.

Can I just say how much I love this design!

I already voted for this one and said why in the poll, but I figured I’d just say again: this build is really excellent. It’s one of my favorites in the entire contest, I’d say. The limbs look strong while being appropriately thin, and the skirt and the lift arms on the back give color and character. Spokes on the shield are pretty unique among the other entries and effectively evoke age and the sea. I’d say the only things that don’t quite work for me are the waist (a little thin, but now that I look at it I’m not sure any thicker would work with the rest) and how far the chest sticks out from the rest. It looks good from the front, but the side shot… eh. I do like its triangular design, though.

Thanks for your support and feedback, I’m glad you like it! I can see where you’re coming from with the chest. Earlier in the process I actually had the shoulders mounted further forward, but I couldn’t find an aesthetically pleasing way to place the neck far enough forward to match, while also accommodating the mounts for the chest panels. I will say that personally, it bothers me more looking at that picture than it actually does in-hand.

This moc is among my top three faves. It deserves to win.

Thanks! It’s probably made it as far as it’s gonna go, but it means so much that the design works for you and others as well. I know I’m not the most experienced builder in the contest, but as one of my favourite characters, I felt compelled to enter and try to do her justice any way I could.

Hoseryx is hilarious btw, no hard feelings for kicking my MOC’s butt

Currently, you’re only six votes away from entering the top two! It’s feasible that you could pull this off and become canon, or at least make the final bracket.

It could still breach the Top 2 in its bracket, but even if it doesn’t, I think I’m happy to say that this is going to shape my mental image of Helryx from now on. I’d do some fanart if I could draw Bonkles.

Thanks! Even if it doesn’t make it, it means a lot that there are others who see Helryx similarly to the way I do and have gone out of their way to support it.

This is one of my two favorite designs I have seen for this contest. Based both on effort/creativity and on my opinion on whether this could fit the canon, this is really high up, and probably the one with the least tradeoffs. Sadly none of my favorite designs seem likely to win, but I would be happy to picture Helryx like this!

Thanks, I really appreciate that!