How do you pronounce Lewa?

Hopefully this hasn’t been asked before, but since you are the authority on Bionicle canon, what is the canonical pronunciation of Lewa?
Is it LEEWAH
Is it LOOWAH
Or is it LAYWAH?

Wow, really? I always thought it was LEEWAH

Lewa’s name is controversially mispronounced in most of the media. But on the BZPower Greg used to say that the Encyclopedia’s pronunciations take the precedence. So it’s LAY-wah.

I’m pretty freaking excited at the hope of being able to get this one cleared up, with respect to the years of mispronunciations that we’ve seen. Thank you for asking this one, man; as a communityy, we should have cleared this up a long, long time ago, assuming that we haven’t already.

It’s kinda funny that in English I always pronounce it LEEWAH, while in German I say LEHWAH.

But as people have already pointed out it says LAYWAH in the encyclopedia.

It might be worth noting that Lewa calls himself LEE-WAH in MoL.

What if different characters refer to him differently?

Being Swedish as I am, I pronounce it Lee-wah. Seriously, it’s an E, not an A. Actually, I pronounce Kewa Kuh-wah…

Hopefully I can help clear things up, and maybe make Greg’s job a little easier.

So in other words, Loowah is outdated heavily, and Leewah and Laywah are both correct. Not sure why they chose his last name to be By Pronunciation, though…

Lol now I can feel better about calling him LEEwah

All of the actual pronunciations just don’t sound right. English has specific pronounciation rules that need to be followed when making names. I’m so glad that the commercials and other sound based media opted for better, smoother pronunciations that we all still use today.

Can’t be, there’s no L in the Maori alphabet. It’s Hawaiian.

In fact, only half of the original six Toa had their names derived from Maori: Tahu, Pohatu and Kopaka. (Onua appears to be Tongan, but I couldn’t find anything for Gali.)

So, how would it be pronounced in Hawaiian? Anyone who knows?

In fact, only half of the original six Toa had their names derived from Maori: Tahu, Pohatu and Kopaka.

(noun) Ice, Frost, Hail, Glacier (i.e. snowy stuffs)
(noun) Shortage, Deficiency, Lack. Curious how he lacked what it took to be the Leader of the Toa, mostly not wurking alnoe.

Tōpito kōpaka means polar ice cap and awa kōpaka means glacier (verb-specific, i.e. A glacier is a body of ice slowly moving down from the mountains. Maori is confusing.)

Greg has stated he pronounces it as Leewah, and wrote it as laywah in the encyclopedia because that’s how the original story team said it. Personally, I don’t see how one could read “Laywah” from “Lewa”, but my opinion is irrelevant.

I use Laywah myself… don’t know why. I first read it as Luwah, but after seeing the movie, it kinda mixed Luwah and Leewah together into Laywah.

Which just hurts, it feels wrong to pronounce it that way, especially given the ‘igniters’ prototypes.(at least I assume they were prototypes…)
ig-nee-ters

That makes a bit more sense, they’re a gang, pirates, piraka, I can see the similarities.

I went with vez-on, close enough to the proper pronunciation.

I always went with Lee-wah, which is the ‘most canon’ pronunciation, considering even Lego went with it unanimously for g2. 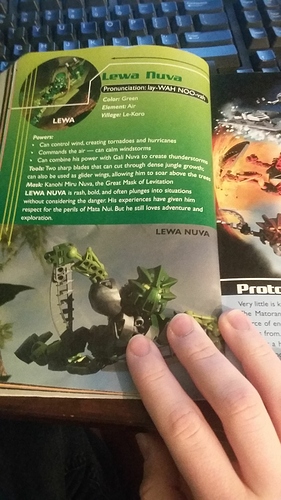