How To Get To Mata Nui?

How exactly did the Toa Metru get to Mata Nui? It seems like a vertical trip, but all the things I have read suggest a flat journey, I’m sure the answer is somewhere, I just don’t know where to look. I know there was something mentioned about getting to it from Mangaia, but the Metru wound up on Naho Bay.

pretty sure they just used a boat

He’s asking how they traveled vertically in a boat

I’ve actually been wondering the same thing myself.

@MaximusPrimal I consider myself ridiculously well versed in the lore, but I never knew/understood this. I’m sure a lot of people are the same way.

Didn’t they use one of those flying air ships?

In web of shadows they did, but in the Legends of Metru Nui arc, they used a Vahki transport with matoran pods strapped to the side as a boat.

I say someone fell asleep at their job.

My vote is on chute technology propelling them vertically without their knowledge.

Easy. The path was a spiral.

How does that work?

Think of a spring stood on end. The wire is almost horizontal, yet it goes upward.

Not the inward type of spiral, more like a spiral staircase.

I guess that could work, though it still raises more than a few questions.

Another possibility: we know the GSR has artificial gravity. It could be that the Toa Metru were going upward, and it just seemed horizontal to them because of the stronger gravity of the robot.

That might be the case, but I think at that point that the artificial gravity and the regular gravity were in the same direction. My thought is that the hole in the great barrier led out of the great spirit robot, and it was like a water lock. When they exited the robot, their elevation rose. I don’t know how Metru Nui works as an island, but maybe water levels rose allowing for an entrance in and out of Mangaia?
Honestly the idea of a universe in a robot is strange, not sure how physics work.
(I do know the Kini-Nui was made for the purpose of safe entry and exit, but I don’t know if it was viable.)

but I think at that point that the artificial gravity and the regular gravity were in the same direction.

But that doesn’t mean that it was constant. Here’s a quick thing I drew to show what I’m talking about (drawing obviously not to scale) 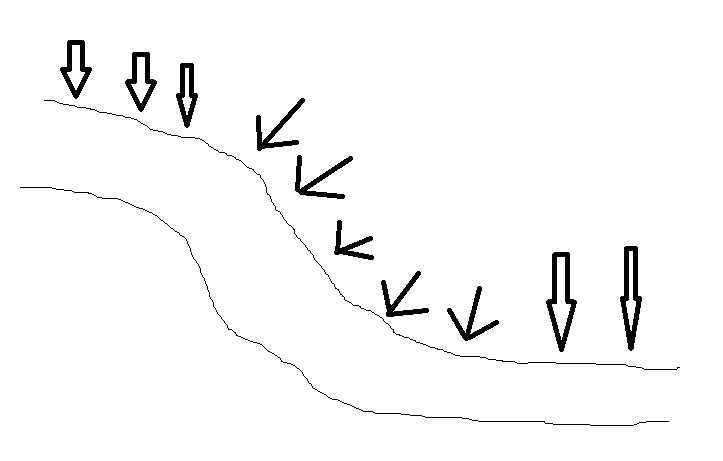 Arrows representing the force of gravity throughout the tunnel…

And of course, this would never work in the real world, but this is a world where any Toa of Gravity can create Black-hole strength gravity at any point, any time. They clearly can manipulate gravity.

That’s true, I don’t think I understood you before. It makes sense, but I wish we had a canon explanation.

If I recall correctly, the Silver Sea actually stopped somewhere near the entrance tunnel leading into the Mangaian cavern system, so any elevational changes would’ve likely been located somewhere within that specific area. Given that Metru Nui isn’t destroyed every time the GSR moves its head, I would also assume that some type of artificial gravity was at play here as well, since the change in the MU’s positioning during the Great Cataclysm (i.e., crashing into Aqua Magna) seems to suggest that (as the island itself wasn’t completely purged by a massive tidal wave) the domes themselves are held in place via some type of gyroscopic device.
Granted, that would probably mean that there were numerous entrances leading into each of the robot’s inner pathways between them, opening and closing in accordance with the various hubs almost constantly shifting, as they’d still have to be able to travel while it was operational (standing, cloaked, flying, doing a jig, etc.), so it’s possible that said elevation is entirely dependent on the passages currently in use.