Now this guy was a funny little build, for some reason I really wanted to make a mini-mini mayhem and I came out with this guy.
The funniest bit was that because of his colour scheme it helped inspire his description a bit and due to it ToaLittleBoehn actually noticed and pointed it out to me that he’s kinda like louder you Lloyd! XD 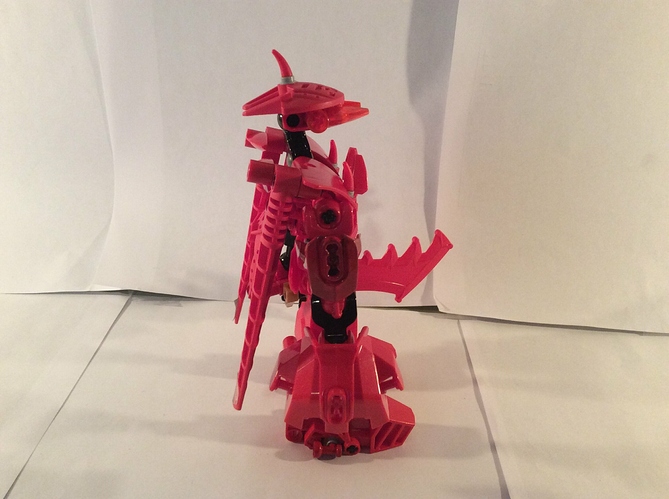 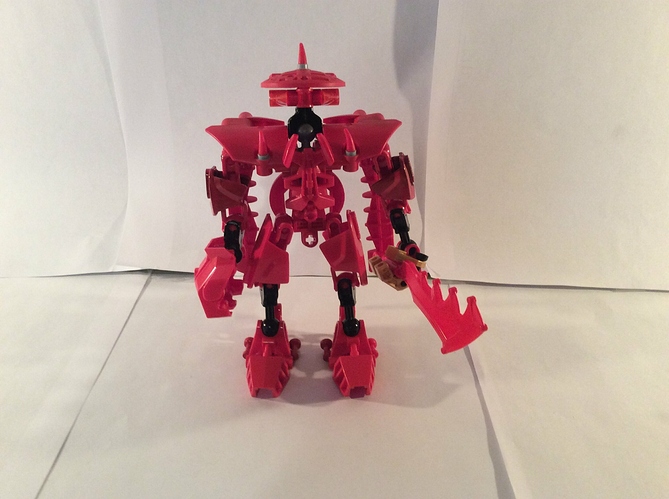 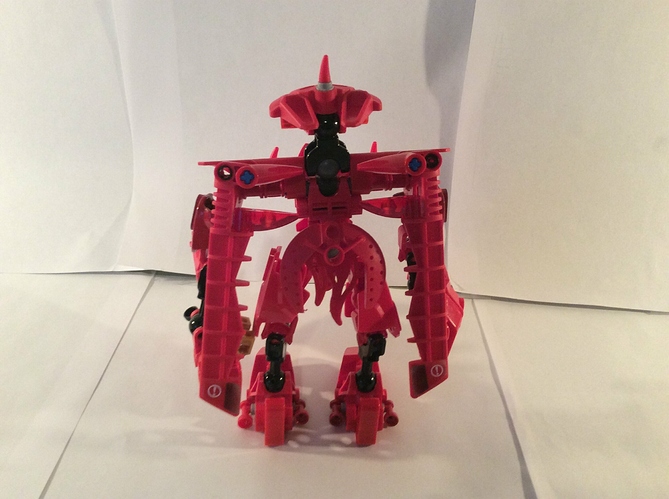 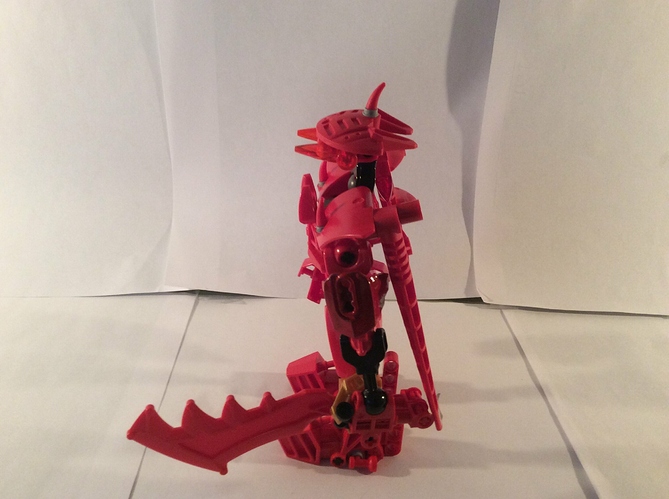 “I AM THE LIVING INCARNATION OF RAGE! THE EPITOME OF ANGER! NONE CAN STAND AGAINST ME! ALL OF YOU PUNY FOOLS WILL PERI-HEY! PUT ME DOWN! I’M NOT DONE RANTING ABOUT MYSELF! YOU CAN’T KEEP ME SILENT FOREVER!”

Sorry about that, he got access to my keyboard for a bit, well I was uploading him anyways so as you can see he’s an angry little bugger, literally little to. “I’M NOT LITTLE!” And also touchy about it

He’s been ragey since I met him, which was an interesting meeting, I came home to find a broken window and him storming around while ranting about his broken wings, so I fixed me up for him and after that he just decided to stay, saying I would be useful to him (I just think he didn’t want to leave)

He’s quite an interesting fellow, as already shown he’s very angry and villain like, well at least he tries to be, from the amount of times he says how he’s pure rage and stuff it seems more like he’s telling it to himself, really all he does is yell, he’s pretty weak and his blade is extremely dull along with how else he acts I’m actually pretty certain that he’s just a kid but he’ll never truthfully admit to it. Really he’s all talk, he says he hates everything but he’ll still do it if it’s something he wants and he try’s to exaggerate all of his powers and evil deeds

Why I think he’s a kid is because of a couple little things I’ve noticed, his love of candy for one thing, even if he does say he hates it he’ll take it, when he’s flying or being complimented on his wings and such he acts completely different, excited, happy and pretty friendly if a but boastful about them. He’s even like a child when he gets tired, claiming that he’s not tired despite being visibly tired and such. He has one fear, thunderstorms, the only other time he’ll act like a kid, he’ll immediately search out the nearest parental like figure and attempt to get comfort from them while still slightly denying that he’s scared.
Also his companion helps show it to.

So far he has started to mild put a bit after being with us long enough, sure he’s still ragey and grumpy but he’ll admit to liking stuff and has toned down his rants a touch, still won’t admit to is fear of thunder (he gets flustered over it XD).

Personality: grumpy, childish, throws tantrums when he doesn’t get what he wants, always trying to convince others that he’s pure rage and asserting it to himself at the same time, ranty, loves jokes and puns, will act nicer when eating candy but to much and he gets a sugar high during which he acts more like a child but goes nuts.

Other attributes: sowed of molten rage, wings with lights rocket jets on feet, movable jet on back, large crushing fist (at least it would be if he was stronger, can only really bonk you with it.). Hates being called small or some nickname that is generally used for someone short, like shortstack,chick I love to call him! The ragey rants he makes!

This guys was fun, large winged shoulders, custom-ish bottom and all sorts a crazy, also for some reason all of my recent ones are solid color… Probably not the right wording, forget what it is but it’s for when you make something in all one color.

Did. not expect to be able to make another one more was I original planning to, he just kinda popped out XD!

He talks in www.1001fonts.com/road-rage-fo… in bright red and only talks in caps when ranting.
Edit: how did I not notice this earlier?! To put it simply the road rage don’t doesn’t have a lower case font for when he’s not ranting so I had to find one that matched up with it. He talks in this font when he’s not being all super ragey and ranty: http://www.fontspace.com/joebob-graphics/pencilpete

Oh also as you mighta noticed some of the pieces are a bit different coloured then the others, I actually custom painted those so they matched up with the rest of the build. 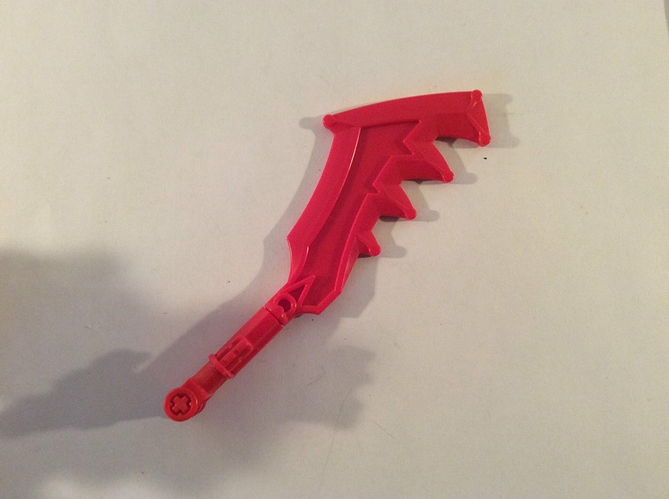 THIS IS MY WEAPON! I MOLDED IT FROM THE PURE RAGE OF MY ESSENCE! IT CAN CUT THROUGH ANYTHING AND NO ONE CAN STAND AGAINST IT!

Yeah really all it is is a dull blade that he waves around when ranting and try’s to threaten people with despite it being visibly dull and all he can do with it is bonk people with it.

Closeups and how to’s 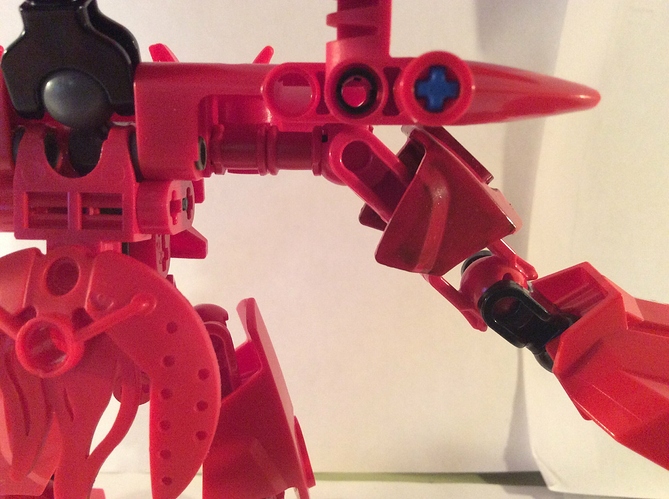 The wing pieces on his shoulder actually were accidental and we’re just me looking for some peice to cover up his arms but inspired his wings, related and a chunk of his description. 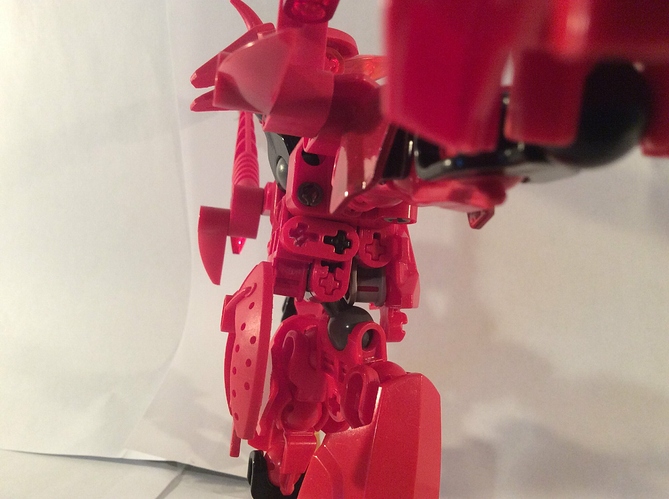 Little bit of the chest connection and shoulder wing thing. 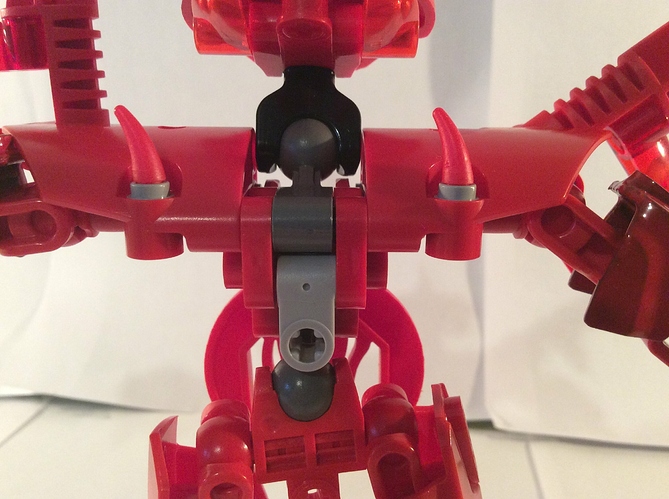 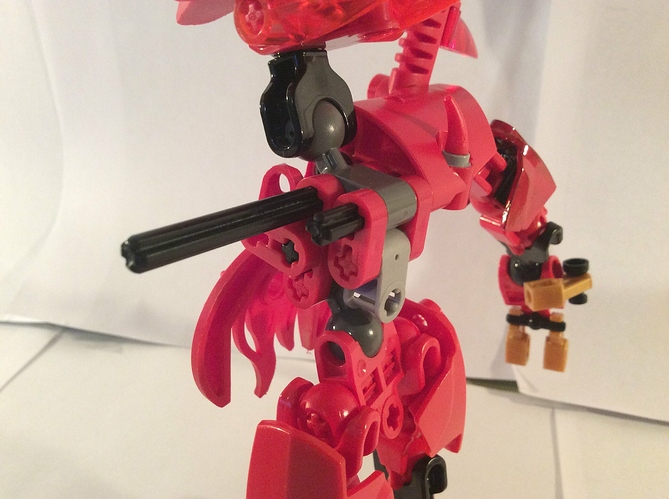 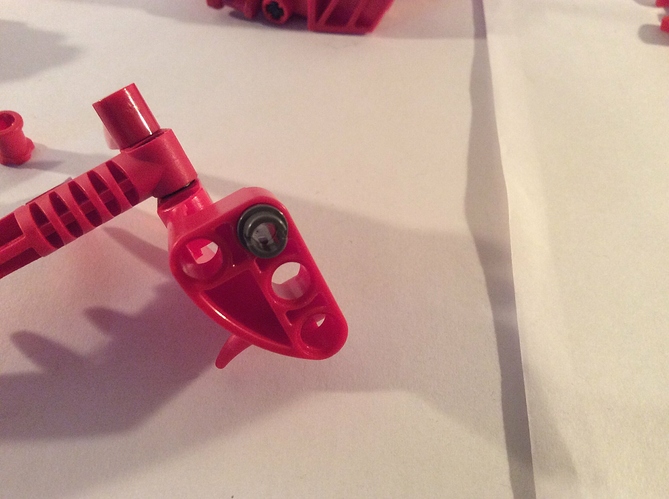 Peices used to connect the jet pack to his back and allow for it to move. 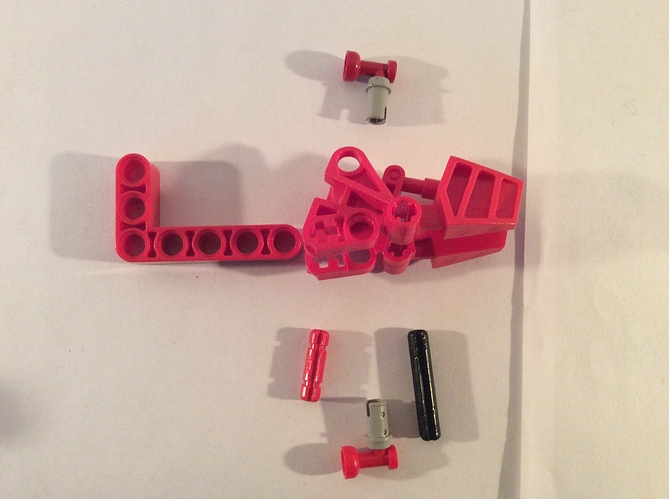 So yeah how to build his foot, and yes I put that peice on the bottom to balance him out becuase of his wing weight. 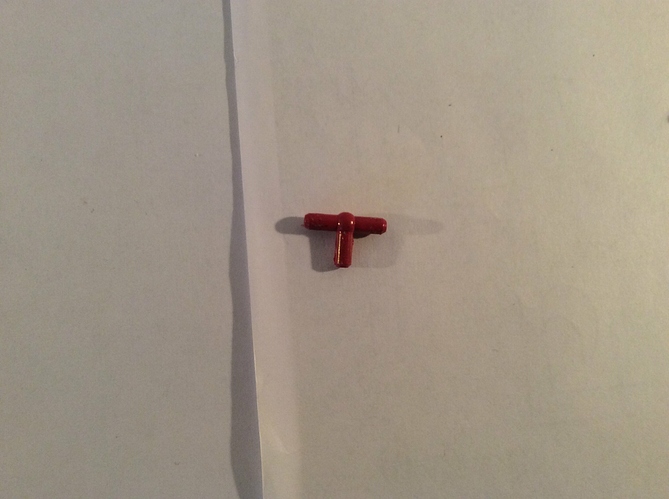 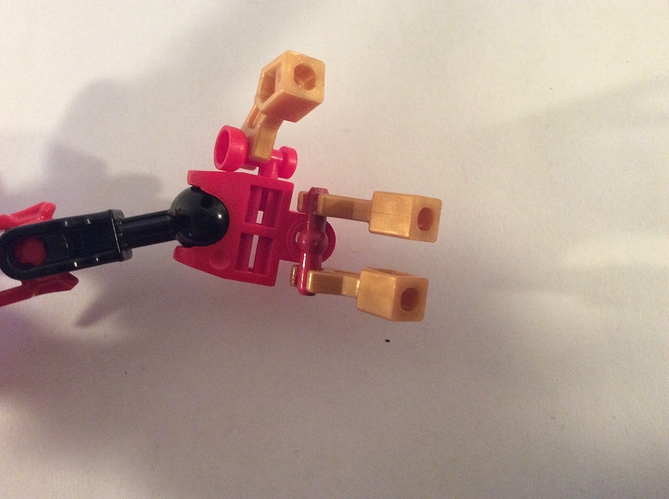 So yeah as you can see I actually custom painted a peice so I could give Jetflar a fully red hand but I preferred it with the black pieces. 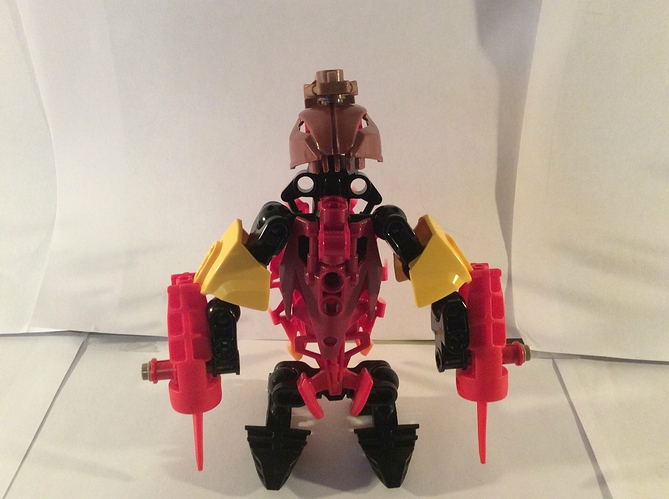 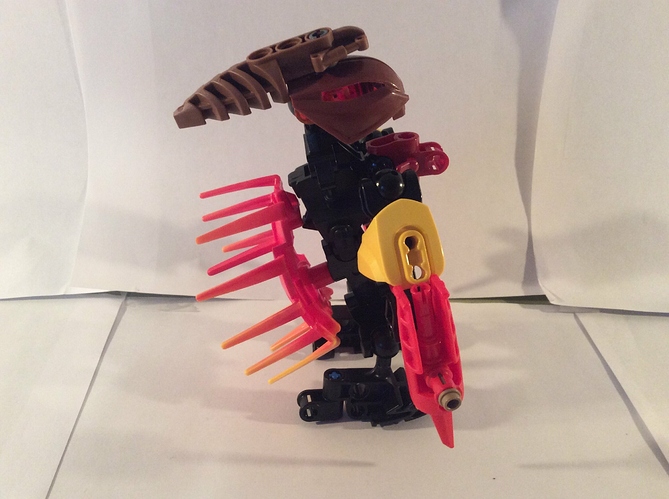 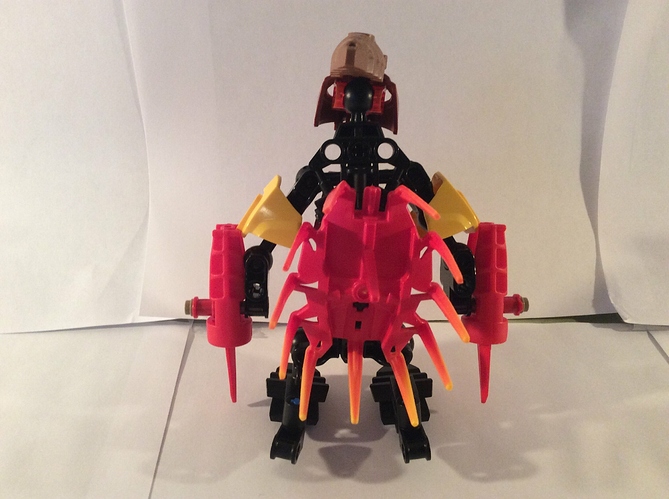 “THIS IS BARON VON DEATHCUDDLE! MY TRUSTED ASSOCIATE AND PARTNER IN EVIL AND RAGE! DO NOT LET HIS ADORABLE LOOK AND ACTIONS CONFUSE YOU! IT IS ALL PART OF HIS DIABOLICAL PLAN! FIRST AFTER YOU HAVE LET YOUR DEFENCES DOWN AND PICKED HIM UP HE WILL SLOWLY INCREASE HOW MUCH OF HIS GREAT STRENGTH HE USES ON YOU SO YOU DONT NOTICE HES CRUSHING YOU UNTIL ITS TO LATE!” So by great strength you mean the strength to just be able to hold onto people and pull himself up ledges and stuff. "Eh, ummm,… n-NO! HIS STRENGTH IS TRULY GREAT AND EVEN IF IT ISNT ENOUGH TO CRUSH “ANYONE HE CAN STILL STAB YOU WITH HIS SPIKE TIPPED ARMS OR BACK QUILLS!” You mean his spiked fur and plastic spikes? "W-WELL EITHER WAY HE IS STILL MY TRUSTED PARTNER!

So yeah you guys remember how I told you his companion also showed how he’s probably a kid? This is why, it’s quite literally a walking, intelligent teddy bear that can’t talk, waddles around, and loves cuddles and such, sure his choice in company sit range but hey who cares, he’s adorable.
So yeah from what I can tell most of his body looks quite a bit worn, quite a bit of it has been replace and repaired, from what I can tell only the head is an original piece.
Because of his leg size he waddles and tends to fall over a bit, his back fur has been purposely spiked and instead of hands he has blunt, bendable, plastic spikes.
He’s usually seen with Jetflare and vice versa, whenever he’s not though he’ll search out the nearest other and attempt to make them pick him up and cuddle him (I.e. Go near them and raise his arms in the pick me up position).
He can’t or at least doesn’t talk but is still very expressive in movements and such.

(And yes I know he’s pretty scrappy, worked it into the description so it worked) 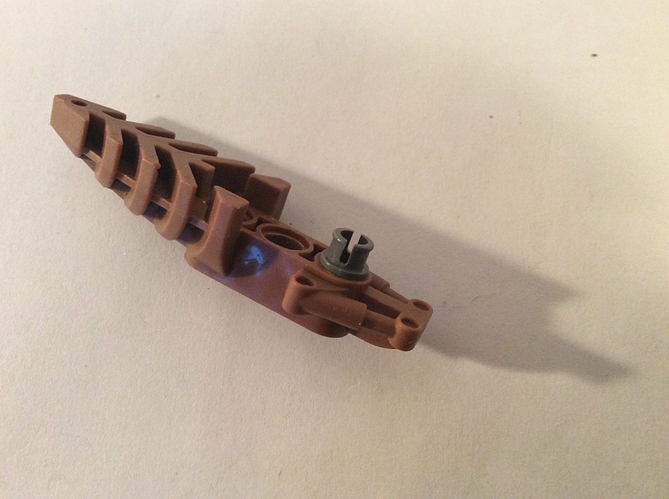 Just for those who couldn’t tell what piece I used to connect it.

This awesome I love how you introduced the characters he the name von deathcuddle!

@Sealman133 Thanks! Yeah Baron Von Deathcuddle was a fun one to name, I kept trying to think up some evil yet cute sounding name that would match up with how Jetflare acts and such, then while thinking about what Deathcuddle did his name just popped into meet head! XD

@Ninjanicktf Thanks! Jetflares name actually came around from his wings while I was trying to thing of a kinda ragey name. While Deathcuddles was just what I figure Jetflare would call him. XD

I love the name.